One Night with the Crooked King
Peter Lengyel
Follow
12
6

It’s early February, 10:25 pm, and we’re in the first quarter of the route to the summit of Kriváň — the Crooked King.

Its vertical drop is one thousand and four hundred meters, top to bottom.

The light from my headlamp is being diffused in heavy grey clouds and I can barely see my two friends six meters ahead. Gusts of wind are so loud that the sound of crunching ice beneath the steel crampons doesn’t get to my ears. It’s sixteen degrees below zero but feels like thirty.

The fact that we’re going to sleep on top tonight, in these conditions and without a tent, seems mysterious to me.

“When everything in the World was created, one angel flew down from the heaven to see what had been done. Tired after a long and exhausting flight, he touched down the Earth in the most beautiful place, at the foothills of High Tatras. Only at dusk he realized, bewitched by all the beauty around, that he must go back to his heaven. So he took off, but his right-wing brushed the dark peak and distorted its summit. Since then, the peak is called Kriváň — a Crooked King.”

This peak is no big deal in summer.

It was conquered even by the gold miners in the early 1500s, but we know what’s the difference when ice and snow are covering the mountain. The first fatal accident was recorded in 1898. Ján Blaškievič, a local tailor who used to illegally guide people to the top, died after he fell off of its east face. Since then, the record of mountain rescue interventions has been rising.

Almost every other day when I wander around my hometown, the Crooked King is up there, showing his majesty. Even when he rests behind the grey curtain of clouds, I know he’s up there and I can clearly see his face luring me to come up and see what’s happening above the clouds. I was always wondering how it would feel to wake up on top, to start a new day and see the World the way only the King does.

And now, in the middle of this cold winter, it’s finally going to happen.

I’ve been here many times and I know the terrain well. But this time it’s different. In the past few days, forty-five degrees of steepness on the south face has been constantly exposed to the sun and wind. Most of the snow was blown away and the surface has been transformed into solid ice. I’m in the lead and I feel responsible because my two friends have not been here before. With every sink of my ice ax into the slope, I wonder if it would be possible to stop the fall of this ice rink…

At the Daxner’s saddle, just a few hundred meters below the summit, the temperature is twenty degrees below zero and the wind is getting even stronger. Our headlamps can light up merely ten meters around us and I feel it’s time to admit that it would be better to stay here. There is a bit of fresh snow where we could perhaps dig a shallow hole to place our sleeping bags and wait the night out. Although we won’t reach our goal, all three of us agree; we will climb the top tomorrow in the morning. After few minutes of work with shovels, disillusioned but wrapped up in the warmth of our sleeping bags, we are slowly falling asleep.

The sun is out and my eyes are opened. There is no wind, and absolute silence is all around us; the kind of silence that feels like some strange sound vacuum. I can see the dark clouds above my head as they softly embrace the summit. There is a vast ocean of clouds shrouded in warming tones of morning light down below us. They merely move; and with a few hundred kilometers of clear view between the clouds, there is a void as far as my eyes can see. The inversion of clouds is so precise that even the curvature of the horizon is evident.

This strangely beautiful moment makes me think about what would have happened if we have woken up on the summit. There would be nothing to see through the clouds above; we would have missed this spectacle…

After a quick breakfast and a cup of hot tea, I put my crampons on and we can continue to the top. With most of the weight left in the saddle and a bit of fresh snow covering the upper part of the hill, the last climb is easy. Upper clouds have slowly vanished and now the sky is almost clear; we can see the whole ridge leading to the summit. On the right side, there is a deep abyss with hundreds of majestic peaks poking out of the sea of clouds in the backdrop. Slopes on the left are plain and long, ideal for skiing; if there would be enough snow.

As I breathe the cold fresh air of high altitude, the sun is warming my back, and just a few steps ahead I can see the famous wooden double-cross.

The time seems to slow down for a while; we are on the summit.

Today, it’s not the peak behind the grey curtain; It’s my hometown down below the sea of clouds. I can’t see it, but I know it’s there. Today, I didn’t achieve what I wanted; we didn’t wake up on top of the Crooked King. But it doesn’t matter anymore. The angel is the one who must go back to his heaven because this is our home… 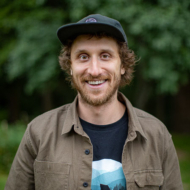