Half around the throne of His Holiness Grandfather Pomra from the Kingdom of Ice and Snow
Monika Benova
Follow
42
3
A solo female walks and hitchhikes independently around one of the holiest mountains of Tibetan Buddhism - Amnye Machen in Golog Tibetan Autonomous Prefecture, China.

I remember feeling tiny and somehow cosmically alone. Yet my sole presence there was amusing me. How the hell did I get here – to the highest “End of the World,” and where am I thinking I am heading? So remote and rugged, such is the destiny of the never-ending ocean of grass, vast valleys, winding rivers, hills rolling into mountains with high passes in their armpits. Never mind, I see a road up in the distance. My feet know what to do.

My presence dissolves in the vastness. Like an alien creature, I find narrow crevasses in space where I can flourish. I keep walking, my only witnesses being wild horses grazing surrounding hills and meadows. To add my statement to the silence after half day of walking, I hum to the rhythm of my steps. I feel happy.

Immersed in the now, I hardly notice the rattling noise of the approaching jeep. I hail it down in time, and the first taste of abrupt extraction from the world of silence feels bitter. This soon balances with a feeling of belonging among fellow human strangers and quickly passing distances. Loud Tibetan folk music adds surrealism to this random encounter.

After ten kilometers, I am embraced by rich nothingness again. Ah, did somebody just tested teleportation on me? Not bad.

It starts to drizzle, and I find myself sitting on the back of a motorbike. Not for long. Ride-giving comrade from our 8-kilometer long motorcycle diary entry soon stops to compensate for my extra weight with air.

After a while, he indicated that his journey is nearing the end. I ask to be dropped off after spotting a monastery on the hill in the distance. The rain calms down, and I enjoy making my own path among grazing yaks and whatever is left of them.

Monastic settlement feels abandoned. My walk around confirms closed doors. This fact won’t take away the beauty off them, though.

The day starts flowing into its darker part, so I choose to take shelter in the only opened structure – an unfinished Tibetan temple. My sleep is interrupted by falling drops of water, and I spend the night avoiding the watery blessings of leakage. If it weren’t for the herd of sheep that kept banging on the door at night trying to get in, the leaking itself would be enough of an excuse for a bad night’s sleep.

Dawn. It’s cold. There is a new form of a known element in the air. Snow.

I start descending towards the main road, passing abandoned houses. In one of these ruins, I spot something, and my heart starts racing. I am scared. The only thing that comes to my mind is to pretend that nothing is going to happen. About three meters from me lies curled up a Tibetan mastiff. There is no need to add the adjective “huge,” as they just don’t come in small sizes. I pray he will ignore me. After few quick steps that felt like an eternity, I knew my prayers weren’t answered. He came barking at me in full strength, and I could feel his warm breath on my skin. Some kind of survival instinct kicked in, and I kept telling myself I am not afraid and there might be a way this can be a happy ending somehow. I recalled the Goddess Tara’s mantra and hoped she would sort out this local misunderstanding for me. She did. Or maybe the furry ogre just lost interest. I didn’t need an exact answer. I was free to continue with my bum in an intact state.

After about an hour, I reached a small settlement. Desperately needed something warm, I shouted for attention over the fence in the first house I sensed life in. Devouring oats with hot water on a muddy road felt luxurious. Amused by this sight, or perhaps pitied, I was invited inside. The first shy ping-pong of body language was broken by taking photographs with the whole family. Their first question was surprising. “Dogs, how?” they asked. So I formed a dog head out of my hand, and my show of a dog attack shadow theatre at broad daylight has been shortly understood. The landlord had an idea, and soon scobs were falling on the floor of a typical “multifunction” room from a stick that he started to grade for me. Before I left, they said three people are safe, two the dogs will go after, and one they will have great fun with. Ah well. Equipped with a thick walking stick, I let my feet keep doing what they best at. Moving.

Then I came across them again. Those businessmen. Chóng xià collectors. Restlessly roaming through the regions’ countryside to buy as much of the “Viagra of the Himalayas” as possible. Caterpillar fungus – a parasite worth three times its weight in gold found only on the Tibetan plateau. Nothing but a fungus infects the larvae of ghost moths costing up to 65,000USD for half a kilo. It is estimated that 80% of household income on the Tibetan Plateau comes from selling the “winter worm, summer grass,” a literal translation of the original Tibetan name.

I am nearing what’s meant to be the highlight of my half circumambulation around Amnye Machen. The Ohm Great Amnye Machen herself. Kora, or pilgrimage around one of the holiest mountains of Tibetan Buddhism (also coined the Mt. Kailash of the east), is among the must-do things in Tibetans’ lives. Walking or prostrating pilgrims can be seen all year round. The sky turned white, summer turned to winter. I try to make up her curves, but the only color lures above the thick foggy whiteness are white. Doesn’t matter. I can feel her.

My imagination runs on full throttle, and I am soaking up her presence with full gulps while one businessman throws praying papers into thin air and the other pours a bottle of vodka on the ground. And throws the bottle in the distance right after…

Amnye Machen, shy to reveal its beauty yet making me feel it fully. Considered to be the highest mountain in the world till about the late 1930s. However, its “measurable” height to be established at 6282m only once summited in 1981 near-simultaneously by three teams.

Still, snows balls when I part with the collectors, and I start making my way up towards an old monastery surrounded by few houses.

Donkey with a secret life. Sometimes it is there, other times not. After one day, I remove him from my “permanent” features of the house that I need to recognize to get back to from my wanderings around the surrounding hills.

The smell of freshly made bread pulled me in instinctively. It will remain the best tsampa and bread I ever tasted this trip. Tsampa, also called pa, is a Tibetan national “dish” – dought mixed by hand made of roasted barley, butter tea, dried cheese, and sometimes sugar.

Lovely grandma and her granddaughter became my hosts for 3 days. We don’t communicate through language. Instead, we talk by observing each other. And laughing of course.

Same same but different. This always looked like abandoned basketball “thing” to me, but it’s used for boiling water in many parts of the world. A kettle, to be precise.

Pilgrims take shelter in monasteries where they pay respects to local shrines. 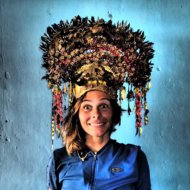