This Place of Darkness
Dan Milner
Follow
129
4
Facing hard decisions in Patagonia while pioneering a mountain bike exploration of the most southern trail in the world, on the island of Navarino — a remote Chilean outpost off the southern tip of South America.

Nothing distracts from the nausea that’s clawing at my gut; not the biting wind that has robbed all feeling from wet, wrinkled fingers, nor the shards of sunlight that stab through the heavy clouds like a dagger ripping at an oily tarpaulin. Those few triumphant rays dance pools of light across this barren, god-forsaken mountainside and another time would be a marvel, but here, now, they offer little solace; instead I am gripped by the gravitas that one of our crew is missing. Somewhere on this wild, untamed island, lost in a swirl of freezing fog, hail and sleet is Claudio. We have no idea where he is or how he is. I don’t want to even entertain the question of whether he’s alive.

I want to vomit.

The faces of my five fellow riders mirror my concerns. We peer out from dripping hoods, blow into our clenched hands and shout above the gale that’s clawing at our last remnants of energy. We have to make a plan, and quickly. It’s been a nine-hour death march to get to this point —the last three under a barrage of hail and snow— and none of us want to backtrack to look for Claudio, to prolong the acute discomfort. Inside, I’m wrestling emotions, altruism battling self-preservation. I’m sure I’m not alone. 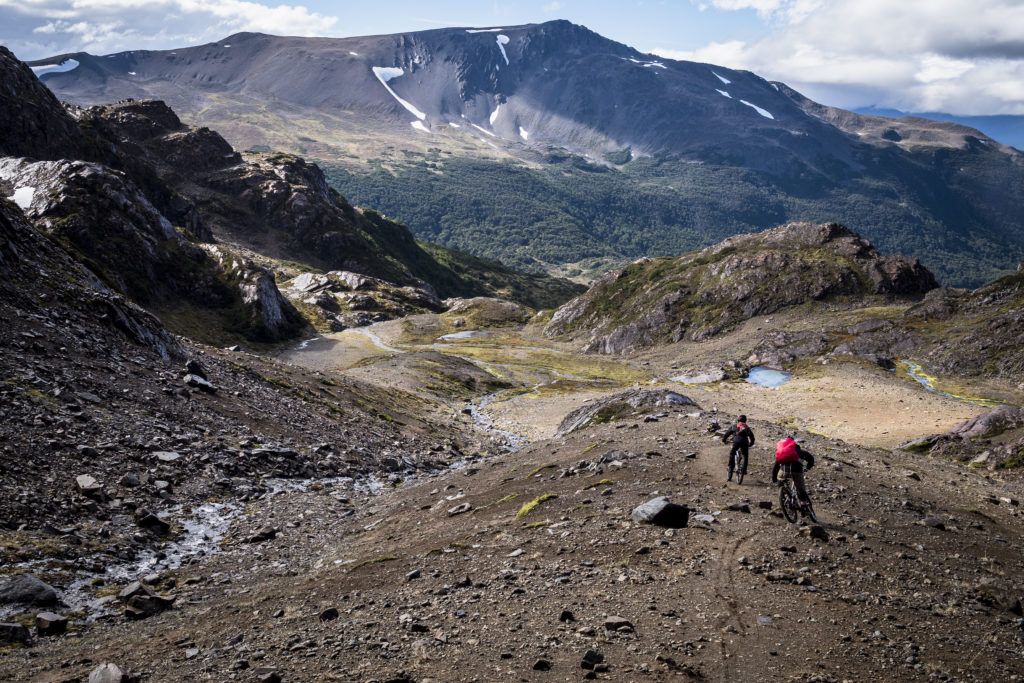 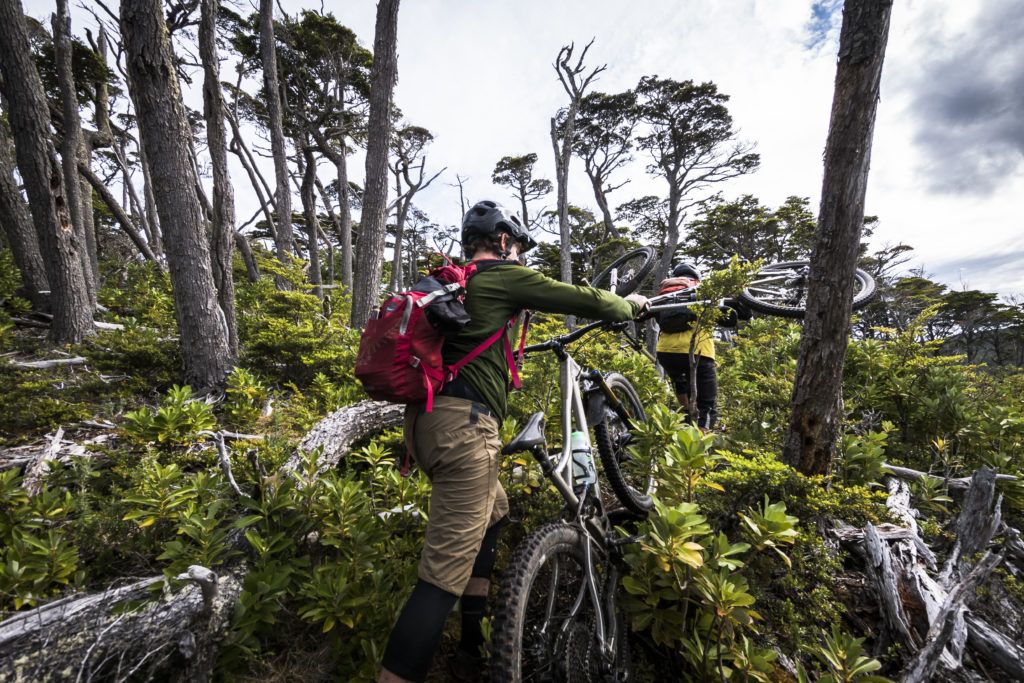 Exploring the most southern trail on the planet is no place to be complacent, but complacent is what we’ve been. And now it might have cost us dearly. We’re only five hours from nightfall and a further merciless drop in temperature, and our lost rider is not equipped to overnight on this desolate mountaintop — none of us are. We have no cell signal, no Sat’ phone and no Emergency Locator Beacons, just a rain sodden map and a compass. I curse myself for not taking the lead, for not pulling out the experience card and insisting that we talk about preparation and gear needs, about consequences and what-the-f*ck-to-do-if-it-all-goes-to-shit.

But it’s too late for that now. Instead, last night we drank our bodyweights in local ale and it has gone to shit. Now we are just four hypothermic mountain bikers juggling bad decisions on a remote Chilean hillside. Ironic that the peak we’re now trying to cross is called Monte Miseria, or Mount Misery. Of course emergencies are hard to foresee and our inaugural rides on the island of Navarino — a remote Chilean outpost off the southern tip of South America— had catalysed our complacency. Six days earlier we’d muscled wheels over tangles of dry roots, leaving dust hanging in the air above every turn of long, winding descents. Then our bare forearms lavished the warmth of a blazing Patagonian sun while the shadows of Black faced Ibis skipped across meadows of golden grass. Warm and idyllic weren’t expected here, especially knowing Patagonia’s infamous meteorological mood swings. 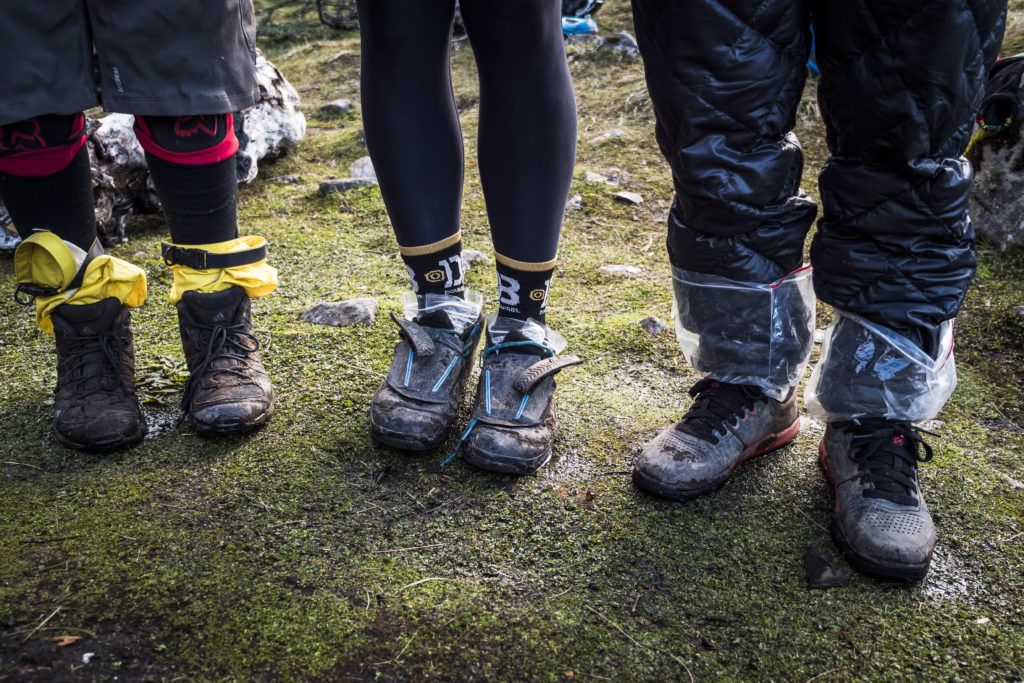 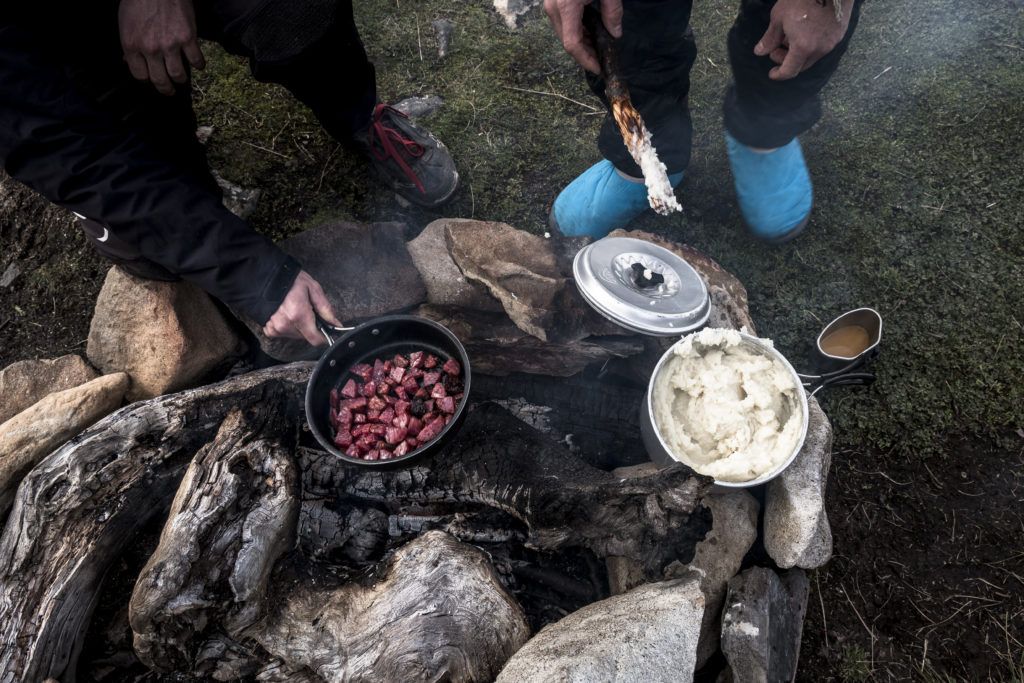 When I first looked into riding this uncompromising lump of rock, Google belched back a dozen hikers’ blogs that resonated pain rather than pleasure. But the premise of being the first mountain bikers to dip into the Dientes de Navarino circuit — a 32 mile, unpretentious trekking route that winds through its spectacular namesake mountains— was enough to lure me to Navarino. Planning the trip with Chilean friend Javier Aguilar, word reached other riders, and Daniel Franco, Dennis Beare and Ryan Stimac made their pilgrimages from Santiago, Canada and Colorado to join us. On arrival we found Navarino’s sole mountain biker, Claudio Osorio, eagerly waiting. Osorio, we quickly learnt, had quit his job at the island’s hospital so he could come ride with us.

We base-camped eight miles into the Dientes circuit and pushed our bikes up steep trails walled in by jagged peaks. Laughing at our differences in fitness, the group’s bond became cemented by shared discomfort as sunshine was usurped by hail and snow. And when we finally exited the Dientes trail three days later, we rode high on a sense of achievement; we’d tasted Navarino’s challenges, chewed them and were hungry for more. But Mount Misery’s trail was never on the original menu —I’d found no mention of it online and it didn’t wasn’t marked on my map— but it surfaced during a meeting with the island’s mayor, Patricio Fernandez in Puerto Williams. He tells us of a little-used trail that starts from Puerto Toro, the most southern settlement in the world and threads its way 20 or so Miles to the north coast. Fernandez had me at ‘most southern’; I didn’t really care how the trail was. 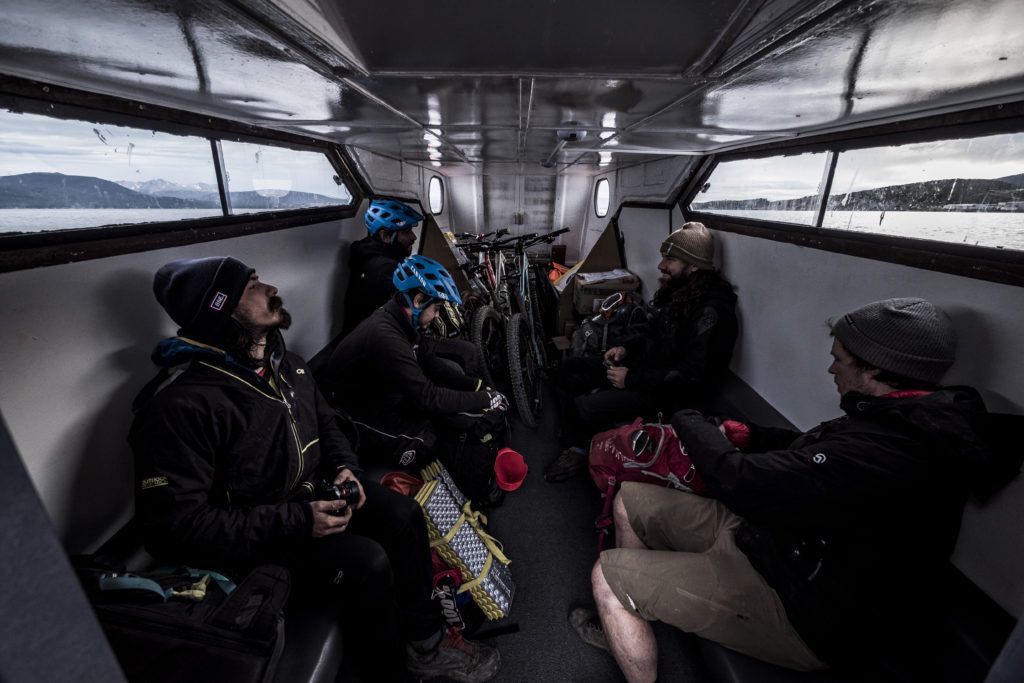 We hitch a lift around the island to Puerto Toro on a 30-foot supply boat next morning, passing shipwrecked reminders of the Beagle Channel’s schizophrenic tendencies. Charts of this region are dotted with names that spot mark the struggles of ill prepared settlers to this storm-ravaged corner of the planet — Desolation Island, Port Famine, Fury Harbour and of course, Mount Misery. For many before us this has already proven to be a dark place. 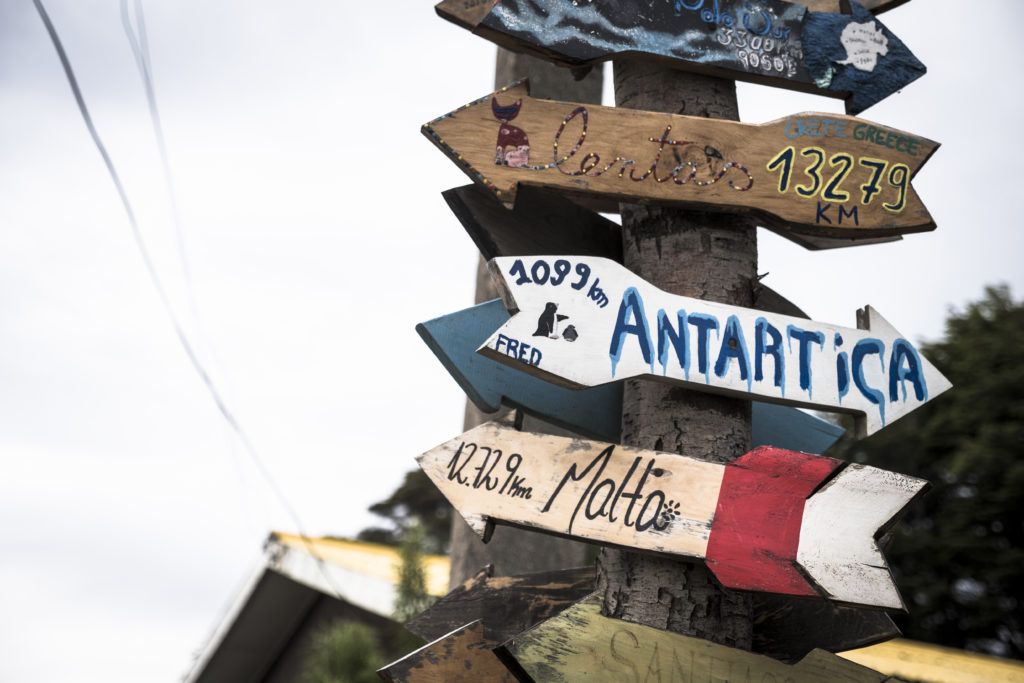 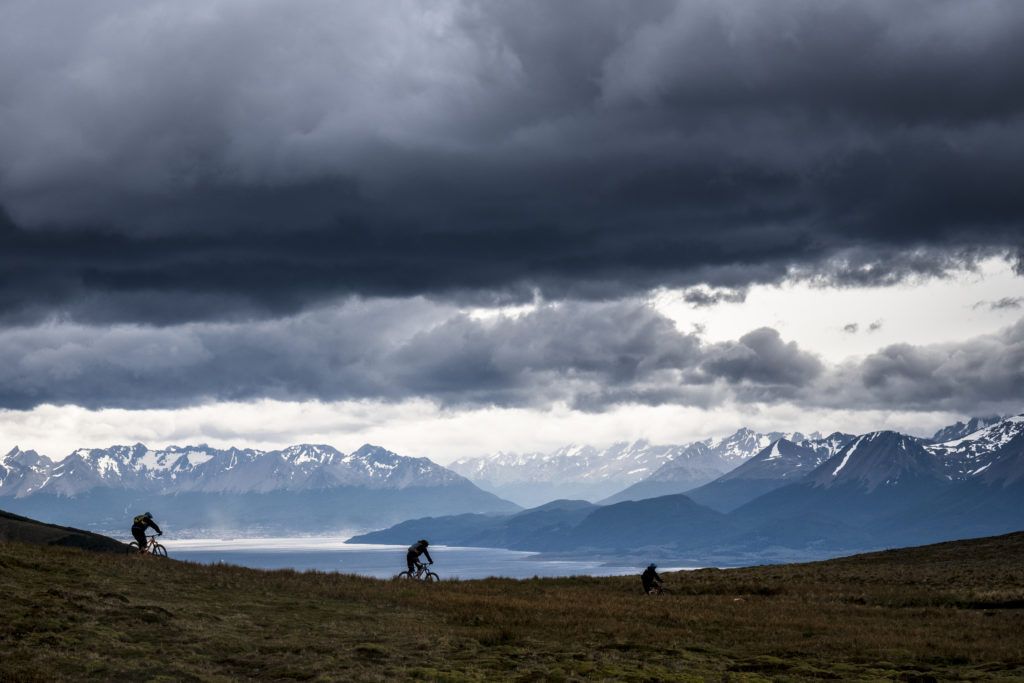 Our boat slows into the idyllic, tranquil bay that harbors the cluster of corrugated tin roofs and rusting satellite dishes that is Puerto Toro (population, 20). Dense Lenga Beech forest tumbles down to the water’s edge, and nestled between towering piles of crab fishing pots an effigy of Jesus cowers beneath a sheet of plexiglass. A Carabinero helps unload our bikes from the boat and smiles with bemusement at our planned route. “It’s a swamp,” he says.

Crossing this ‘swamp’ next morning takes five hours. We granny gear across an energy-sapping mattress of moss that oozes under our tyres, skirt countless pools with water the colour of tar, and weave between skeletal trees, their limbs bleached white as ivory. Occasionally a branch is knotted with an orange ribbon — the markers leading us safely across this raw wilderness. It’s a stark but beautiful landscape, and we’re lucky to be pedalling through it under cloudless skies. But that all changes when we reach the foot of Mount Misery. The clouds gather fast from the West, unleashing the first drops of rain that have us quickly reaching for our Goretex. We sit in the shelter of wind-twisted trees, their dark tormented shapes looming over us like soothsayers of doom, and discuss options. “We need to decide a cut off point,” says Aguilar. I counter that it’s too late for that now. Behind us is a soul-destroying 5 hour slog, and no one wants to repeat it. While we face a steep hike-a-bike to reach the 2100 ft summit of Mount Misery, we reason that once on the ridgeline away from the lowland bog, our going should be easier. Our reasoning hugely underestimates the whims of this island. 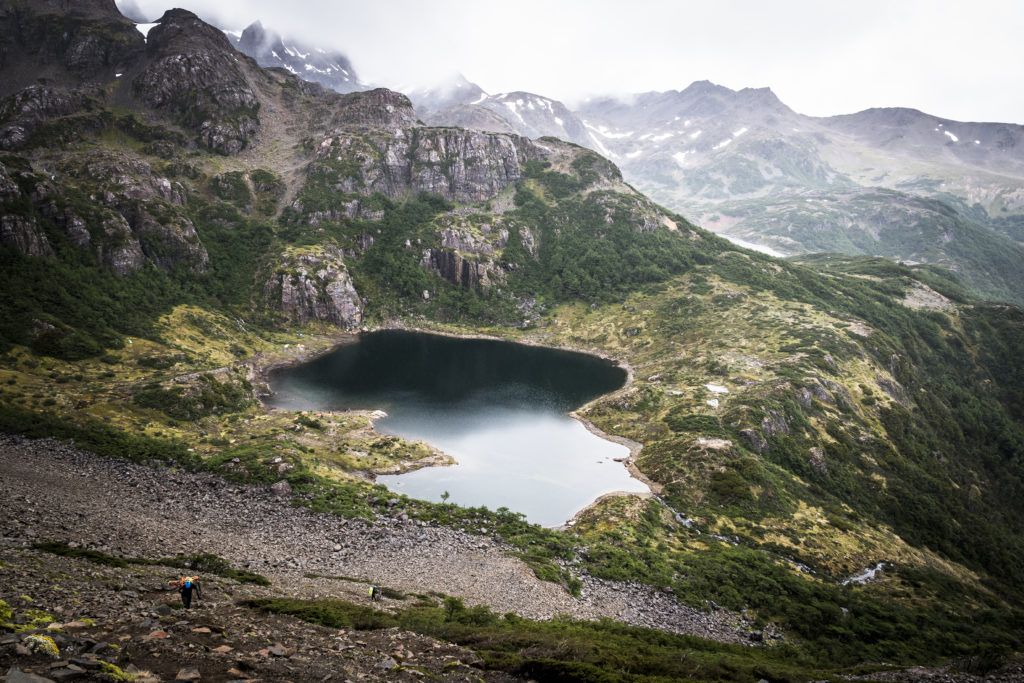 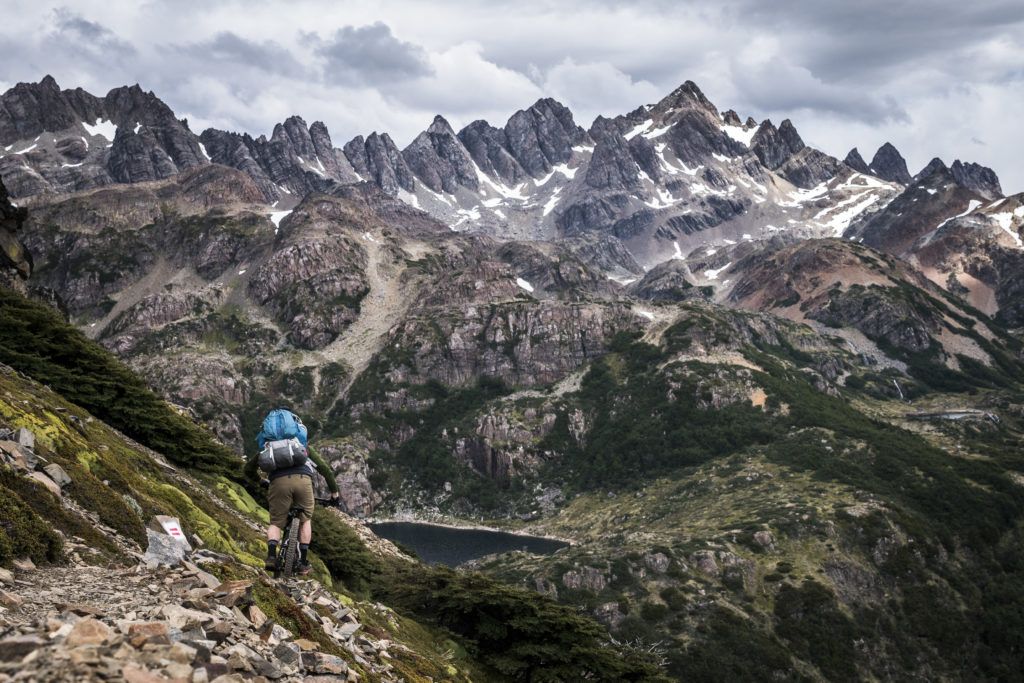 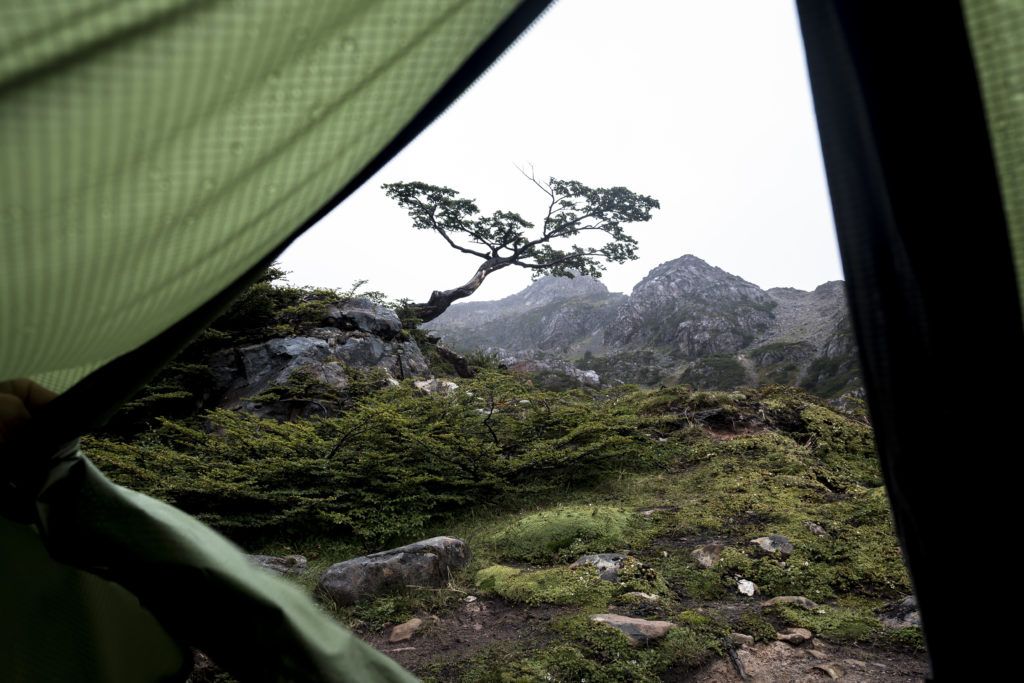 The wind slams us as soon as we stumble out onto the scree-covered mountainside. It scours ice pellets across our reddened faces before sentencing them to a fate sealed in the saline embrace of the Atlantic beyond. At Misery’s summit we remount our bikes to begin an arduous grind Northwards. We have ten miles of ridgeline before the final drop down to the Beagle Channel. Here, in the shadow of a couple of fishing huts, at the easterly terminus of the island’s one road, Osorio’s girlfriend will be waiting with his pickup truck. At least that’s the plan. We cannot change it. Once we leave Toro, there is no cell phone coverage, no dwellings and no other trail options. Continue or turn back; Misery is a committing call.

Enveloped in swirling fog, the ride along the whale-backed ridgeline north from Mount Misery becomes a four-hour death-march. We’re repeatedly blown sideways off line, and stagger to place a foot among jagged rocks— a thousand ankle breaking bear traps in waiting. Two hours in we tumble from our bikes to seek refuge among stunted shrubs. Dennis’ jacket zip snags and breaks. I wring out cold, brown water from my socks. And again we discuss options — as if we have any. A fleeting opening in the mist allows us a compass bearing on a shipwreck we’d passed in the Beagle Channel a day earlier but it confirms the worst, that we’ve not got as far as we’d hoped. 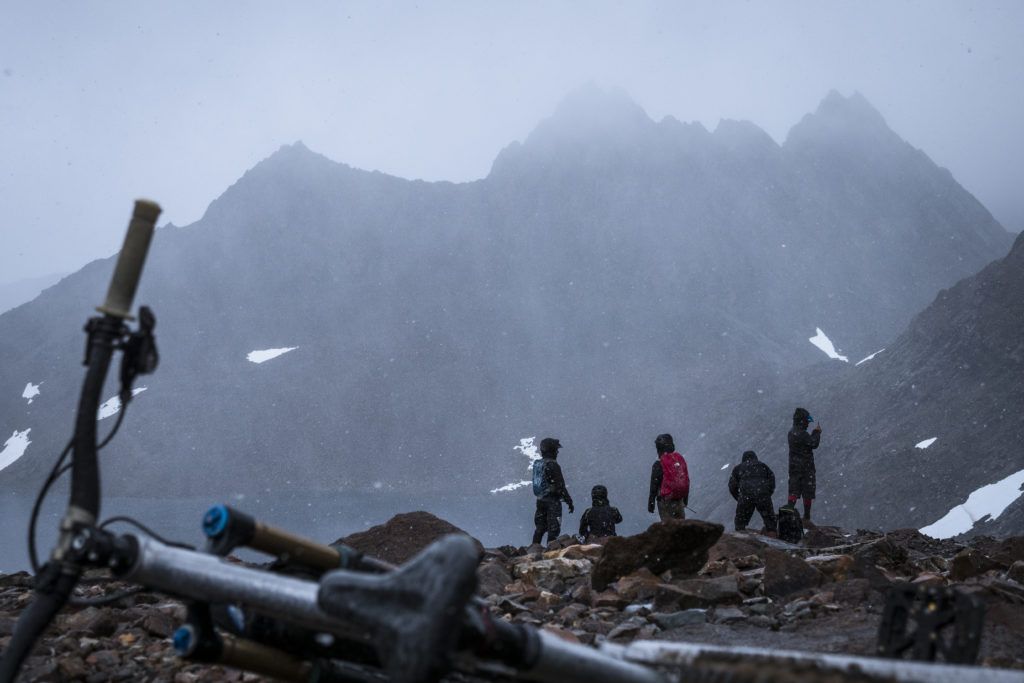 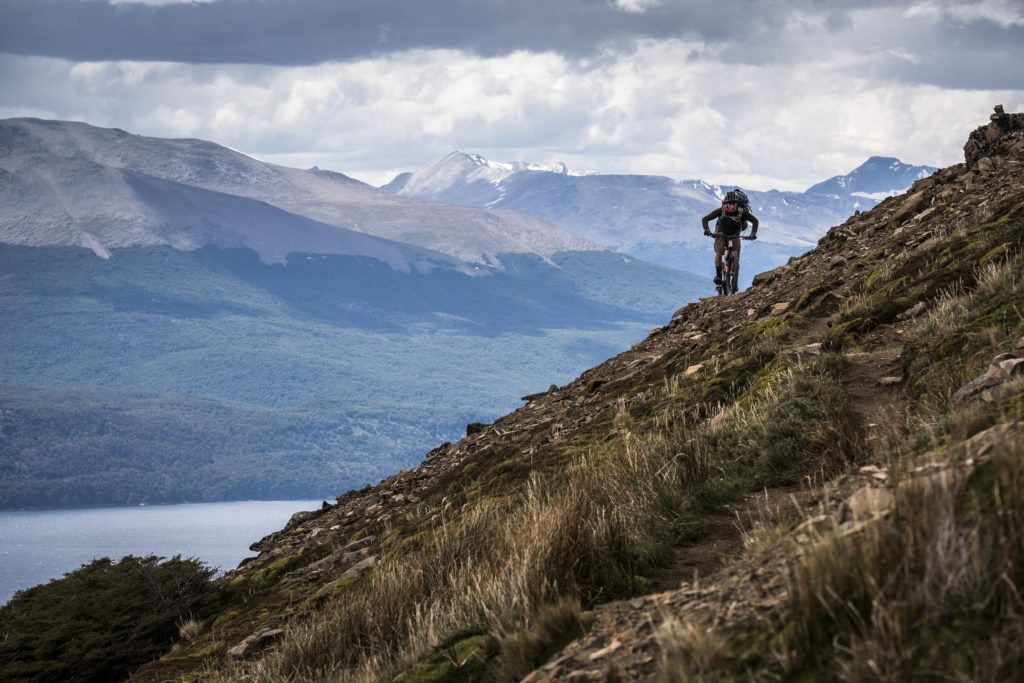 Shouting over the gusting wind and the tack-tack-tack of hail bouncing off hoods, Aguilar and Franco argue for fleeing the ridgeline and descending to the coast. It’s a shortcut out of immediate trouble, but with no trail at the water’s edge, it’s one that risks us becoming lost among the tangle of rocks and thick, impenetrable undergrowth. For the first time I feel the true gravity of our situation. I scan my mind for solutions, but our options are few and none is good. So we grind onwards, heads down shielding eyes form the blasting sleet, following a vague line of trail marker posts that loom out of the swirling fog. Somewhere behind us, Osorio pushes. And then he is gone. We wait.

Twenty minutes goes by but it feels like an eternity, and then we backtrack to the summit to survey the trail we’ve ridden The chilling realisation that Osorio is lost is followed by the more gut-wrenching decision to leave him. We can do nothing more and our own bodies are shaking uncontrollably. Hypothermia is setting in and self-preservation is arguing its corner. We need to get to Puerto Williams and raise a rescue helicopter to look for Osorio. We need to get off this damned mountain. The icy wind bites deep into my core. I’m shivering, exhausted and hungry. The feeling of being powerless in this dire situation is overpowering. We’ve made mistakes, bad calls, ill judgements and our pitiless surroundings have capitalised on these. Amidst the untamed beauty around us, there is darkness. I feel sick. And I know I’m not alone. 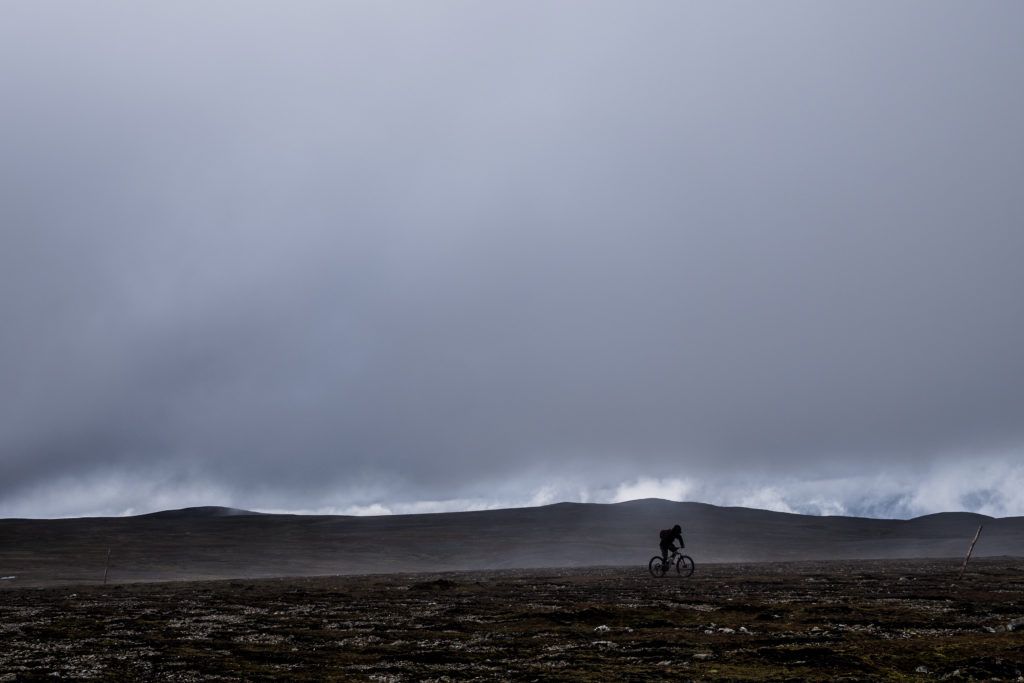 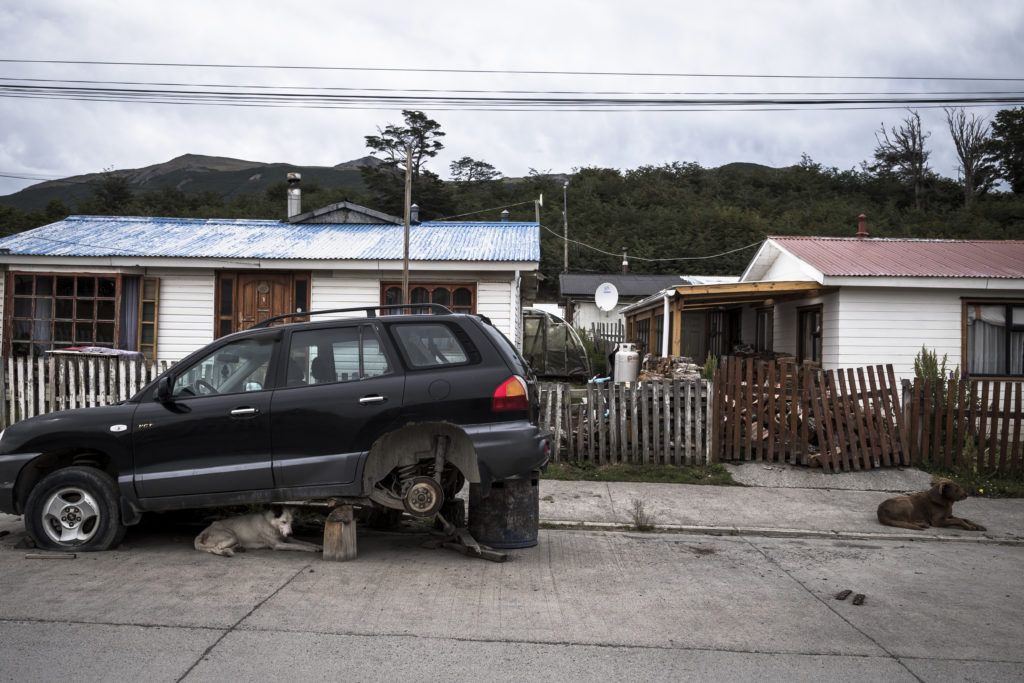 Footnote: We arrived in Puerto Williams at 11 pm — too late to raise the helicopter. Osorio appeared at the fishing huts at first light, twelve hours later, having abandoned the deadweight that is his bike somewhere on the ridge in the storm, a decision that likely saved his life. He descended the thick, knotted forest to the shoreline and hugged it as far as the fisherman’s huts. Never giving up on his friend, Aguilar was waiting for him. Osorio had second stage hypothermia. It took him five weeks to recover his bike from the ridge. He still loves to go mountain biking. 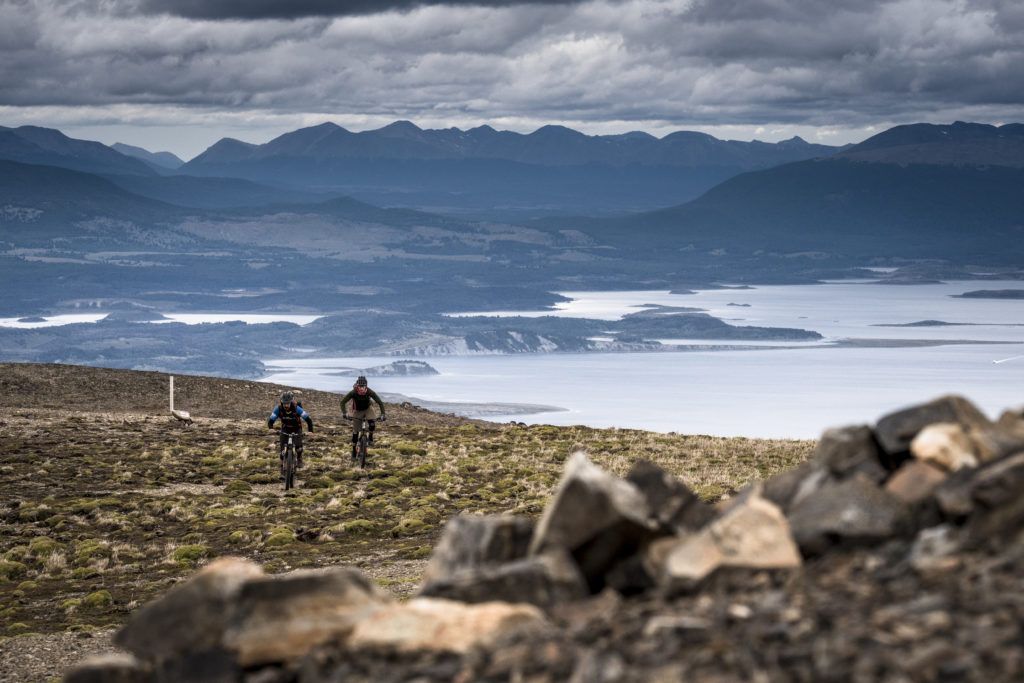 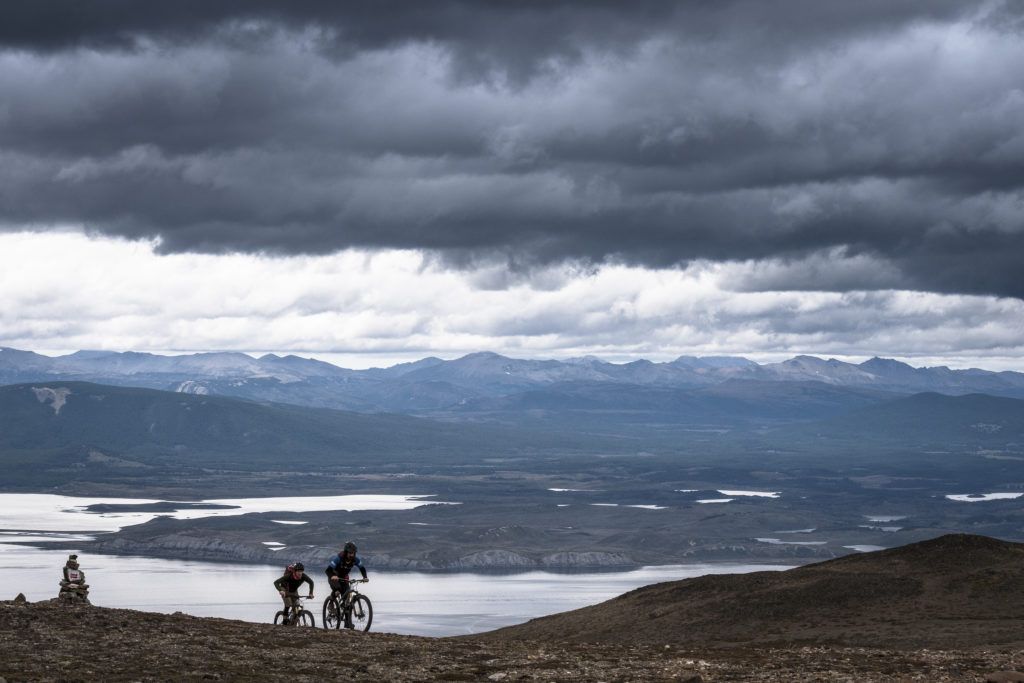 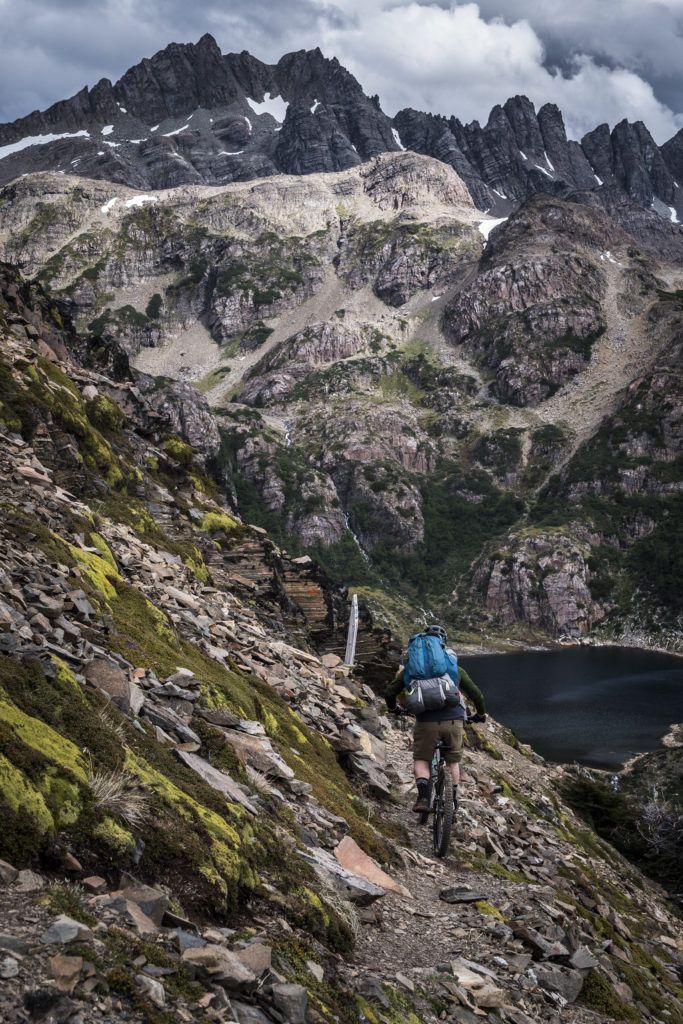 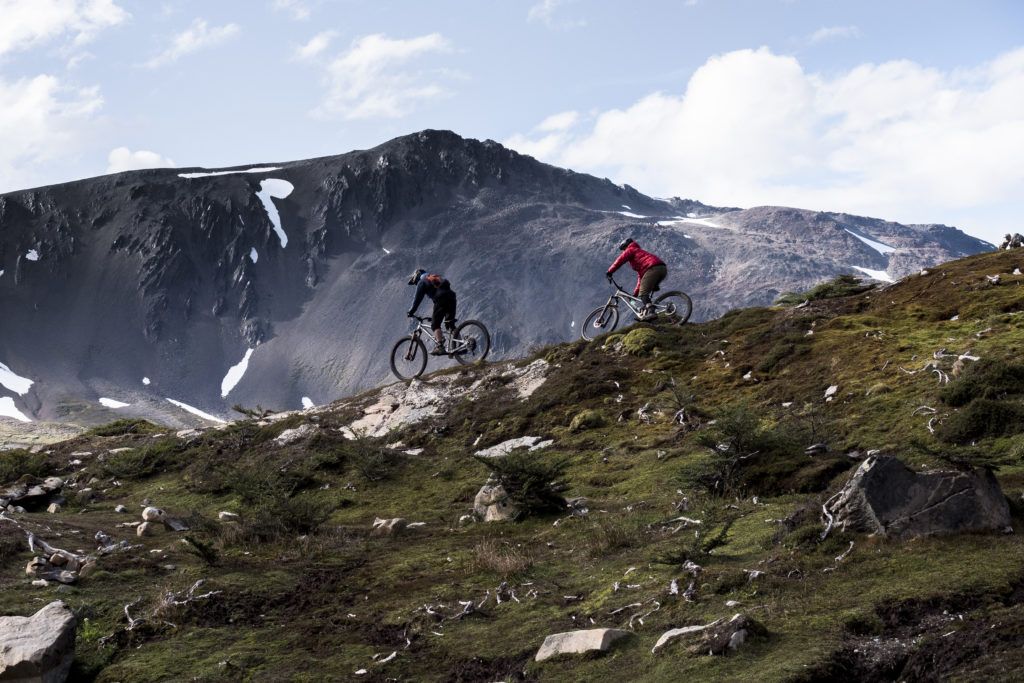 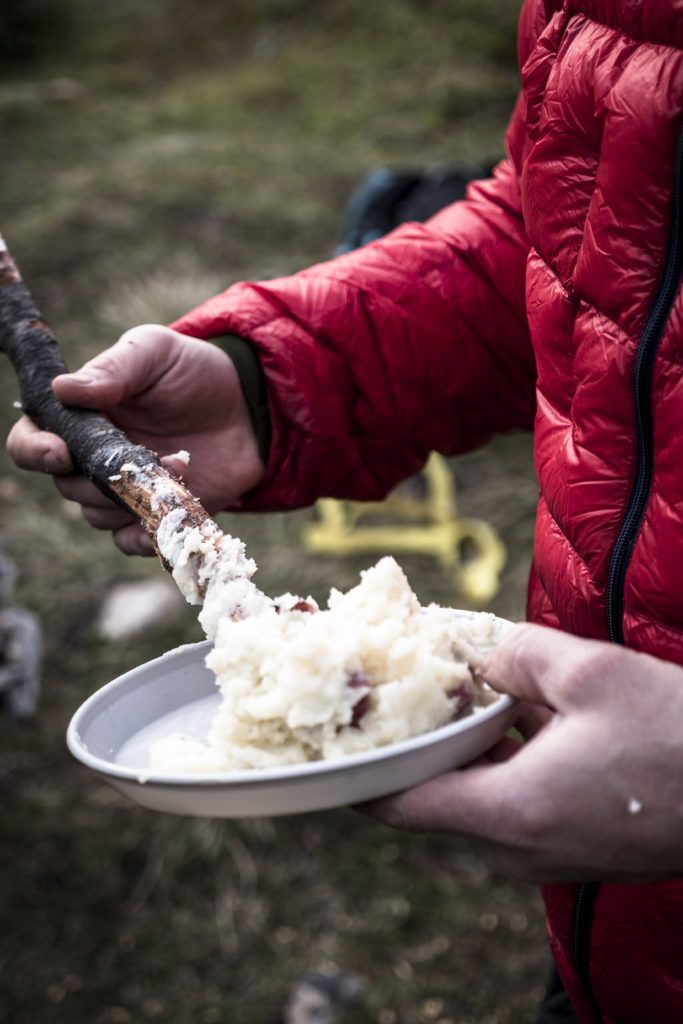 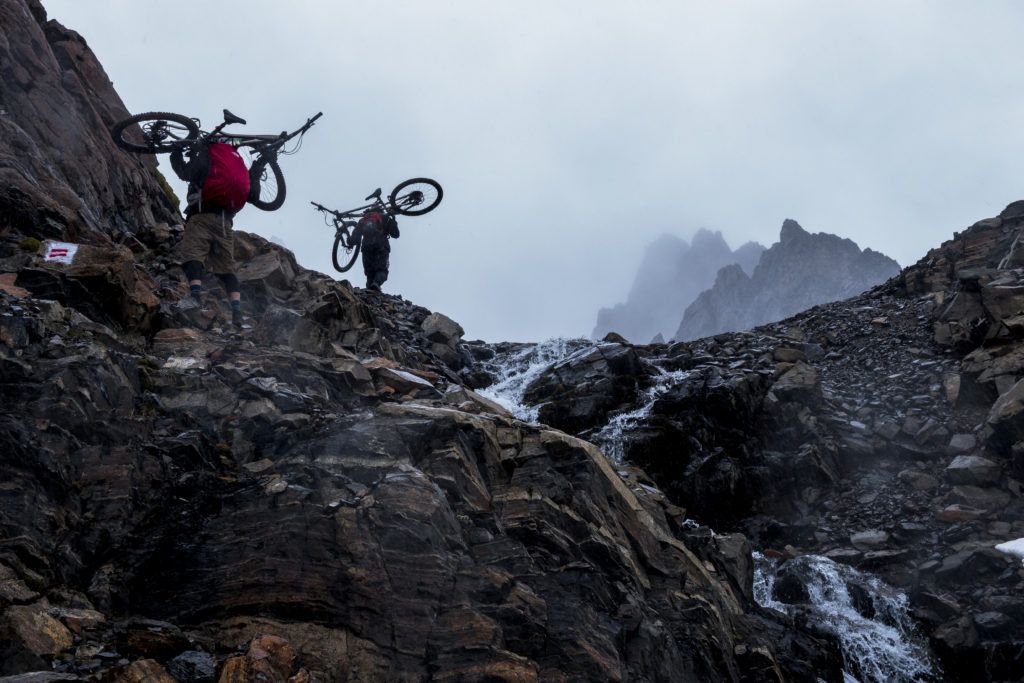 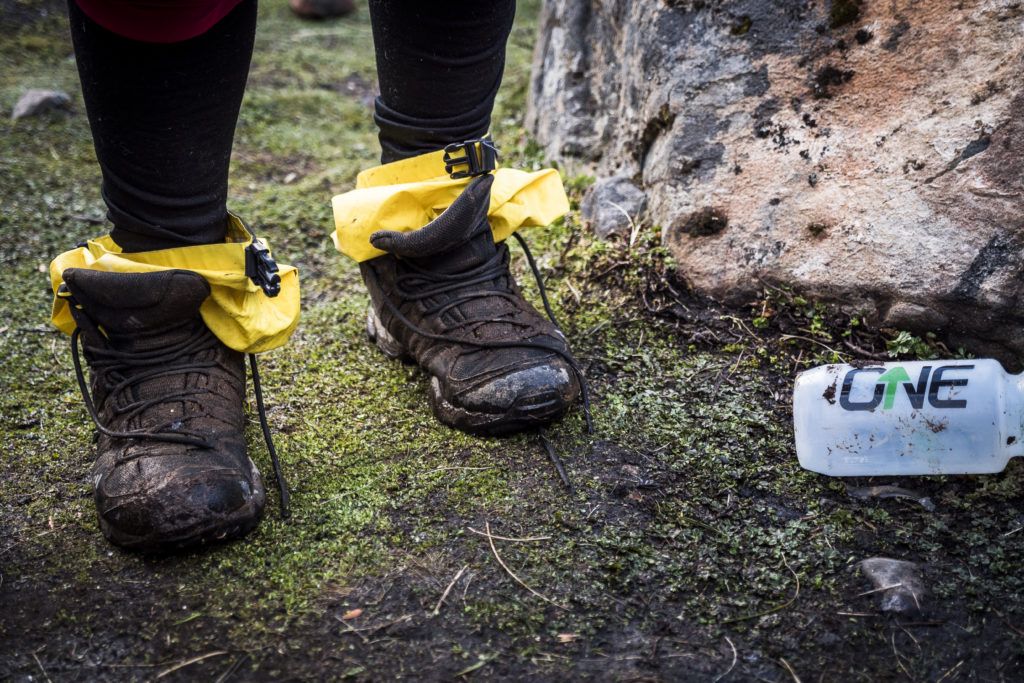 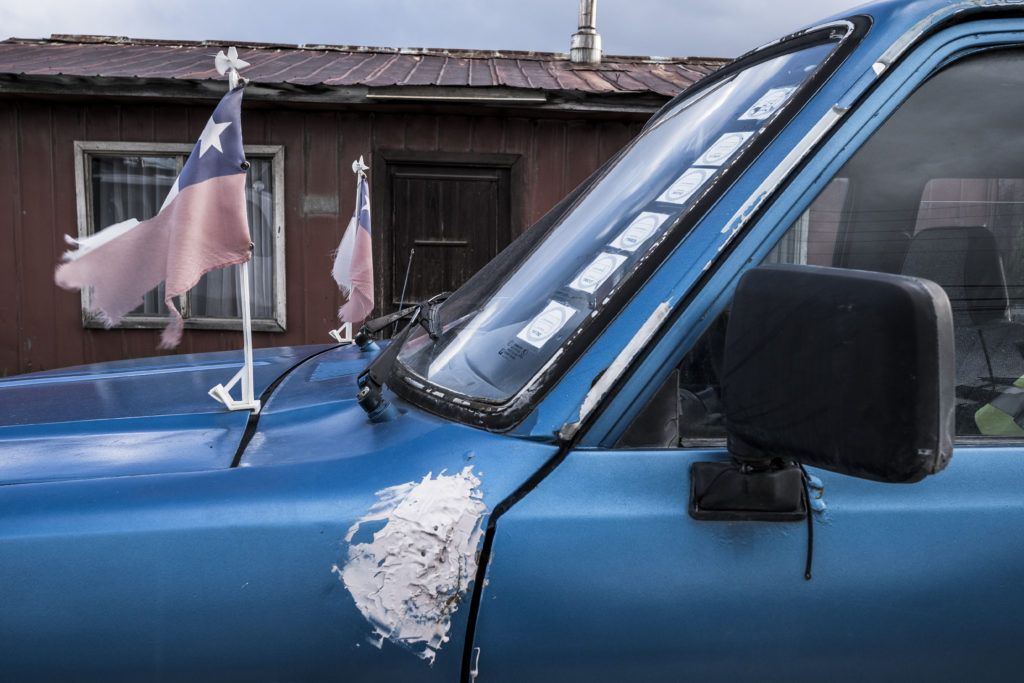 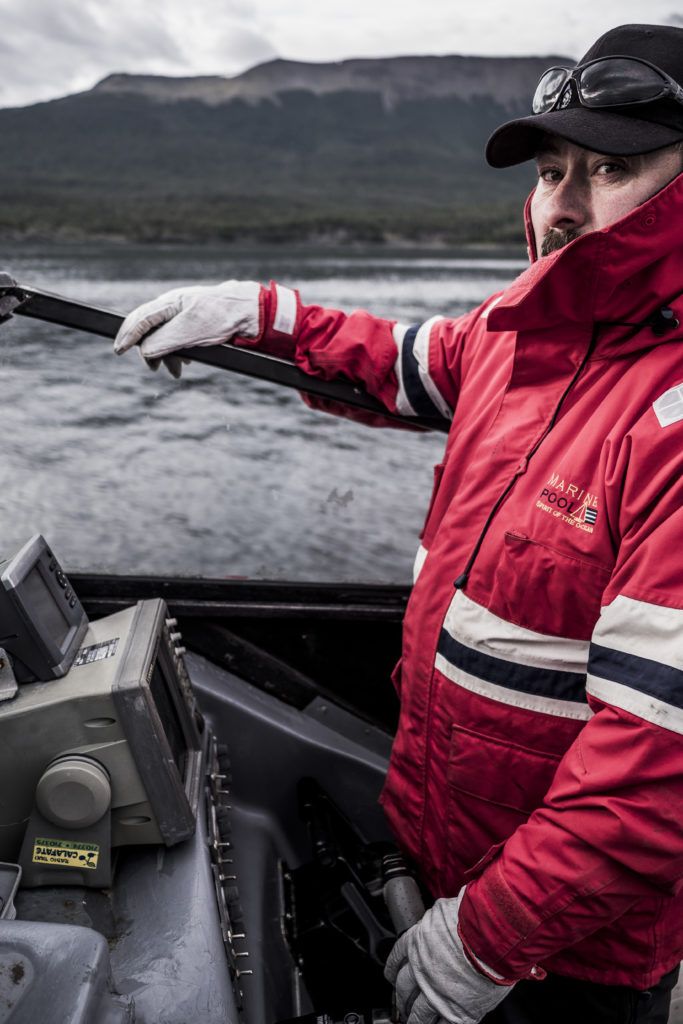 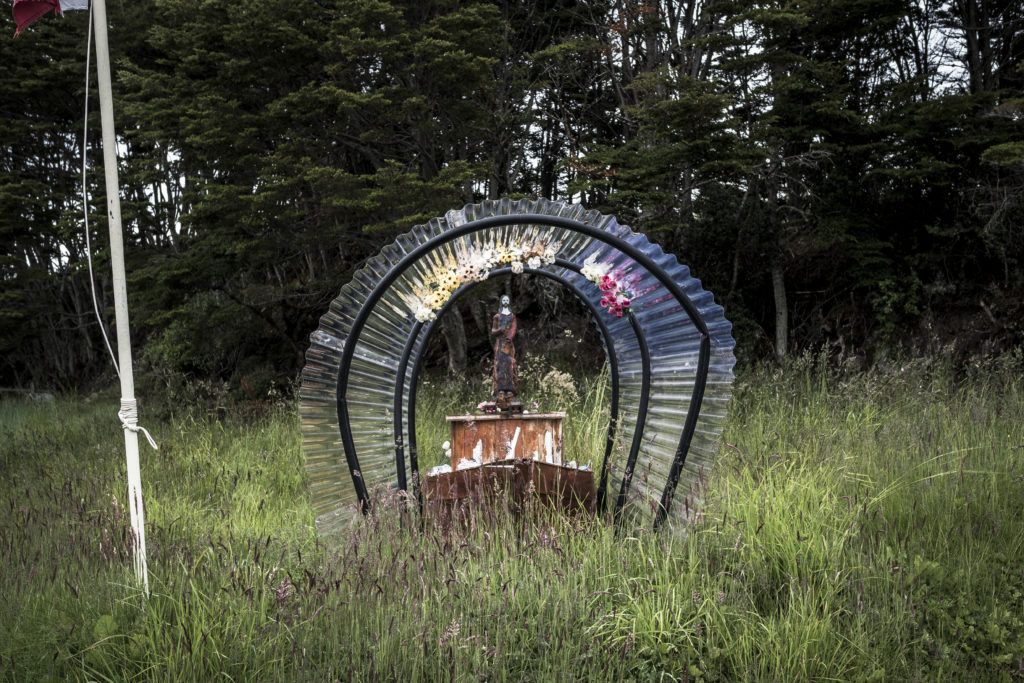 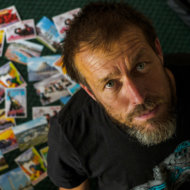 Dan Milner
Dan Milner is a British freelance commercial and editorial photographer specialising in adventure, travel and mountain content. He has documented pioneering expeditions in some of the world's most remote places.

Be the first to review “This Place of Darkness” Cancel reply