In search of Silence
Jose Mijares
Follow
161
1
There was just Lonchas and myself in south Spitzbergen National Park. Two sleds loaded with enough fuel and gear for us to survive 20 days in the harsh, overwhelming beauty. Spectacularly lonesome in Svalbard

I was about to start my fourth trip to Svalbard. I really wanted to traverse its southern regions and, in particular, the huge Spitzbergen South National Park. The wild south provides a much more unstable climate, more broken glaciers and more polar bears than the island’s northern lands. 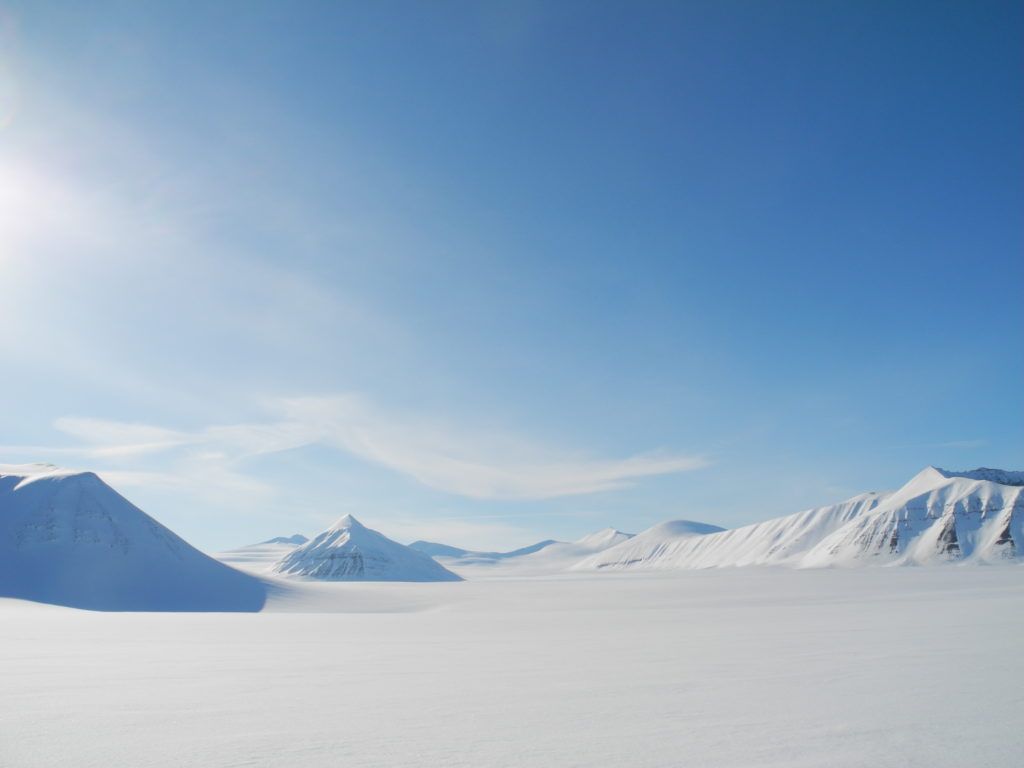 In addition, skidoos are forbidden – even for residents, except for extraordinary cases and under a special permission. This journey was not about speed, not about distance. It was about endurance, about merging into the adventure and living the Arctic experience to its full. Loneliness was guaranteed. 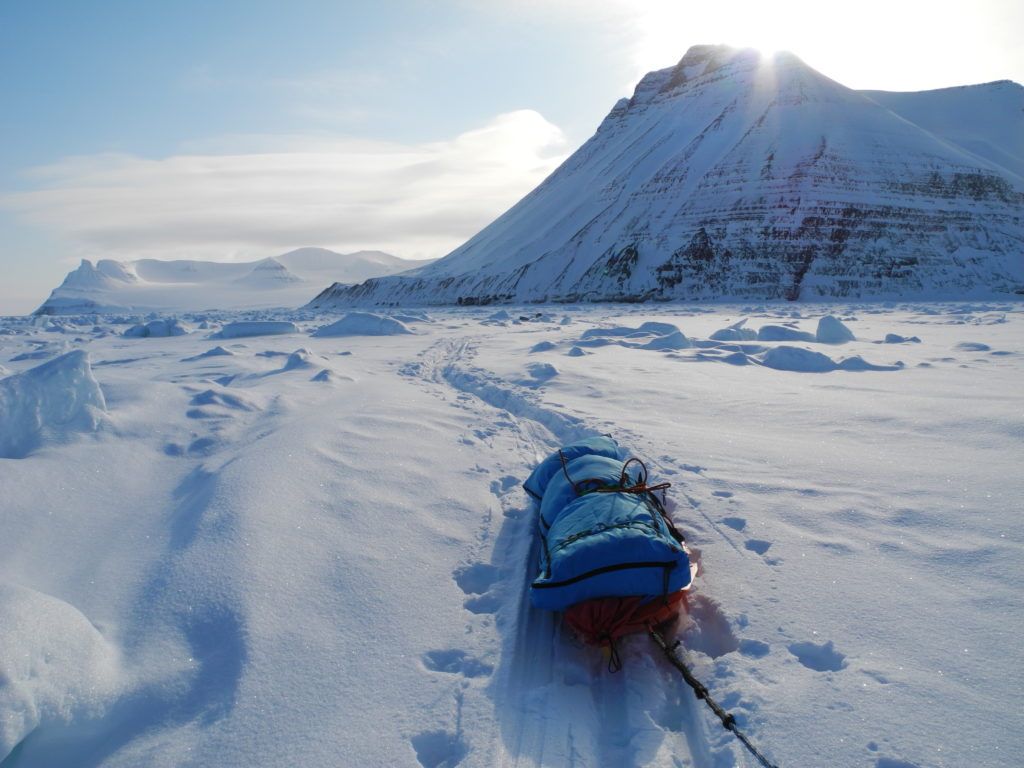 The safest way to travel across the south is skiing on sea ice following the Eastern coast. The sea remains frozen up for a few months year, creating a beautiful madness of ice blocks, chaos and pressure ridges. 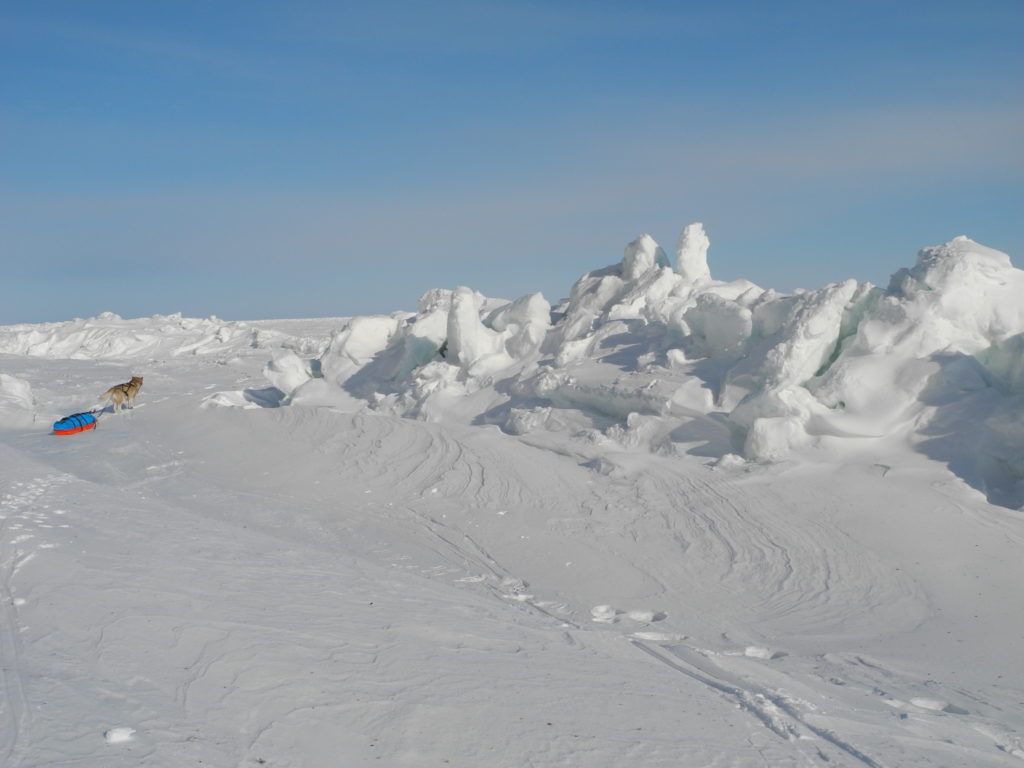 My expedition mate would be my loyal friend Lonchas, a 4-year old Malamute dog. Anyone who has ever travelled together with a dog surely knows that they are great company and, on this particular expedition, Lonchas would be a tireless sentinel looking out for polar bears. 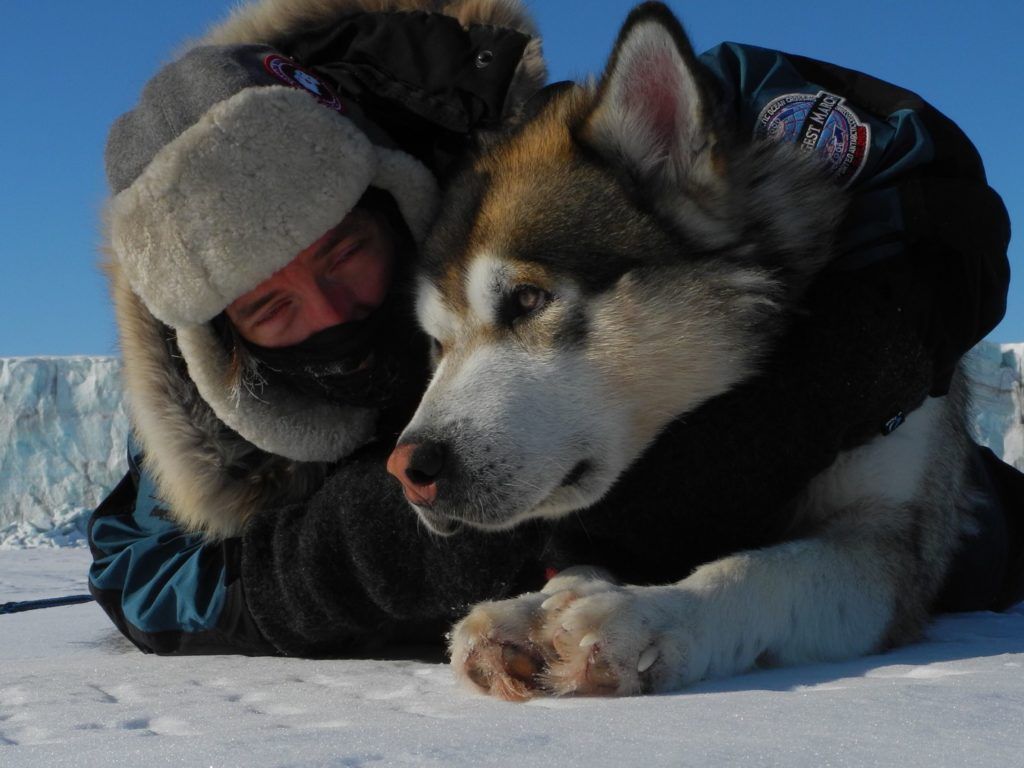 We arrived via three skidoos in Ljosodden on a gorgeous day, sunny and windless, at -20 ºC. It was April 10 and while there was no midnight sun yet, at 77 degrees north, we could make good use of the 20 hours of sunlight each day. We stood still, watching our transportation fade away on the vast surface of sea ice, until they disappeared over the horizon, out of sight. 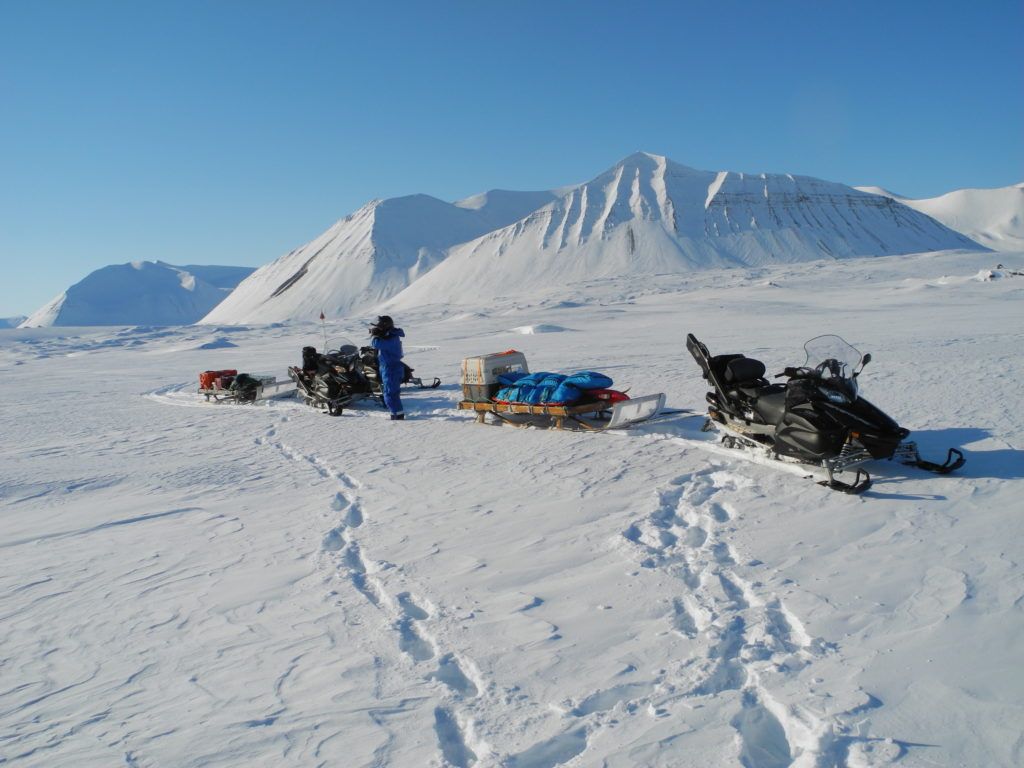 Then there was just Lonchas and myself. Two sleds loaded with enough fuel and gear for us to survive 20 days in the harsh, overwhelming beauty. Spectacularly lonesome. I had done the right thing. It was time to face the trip ahead. 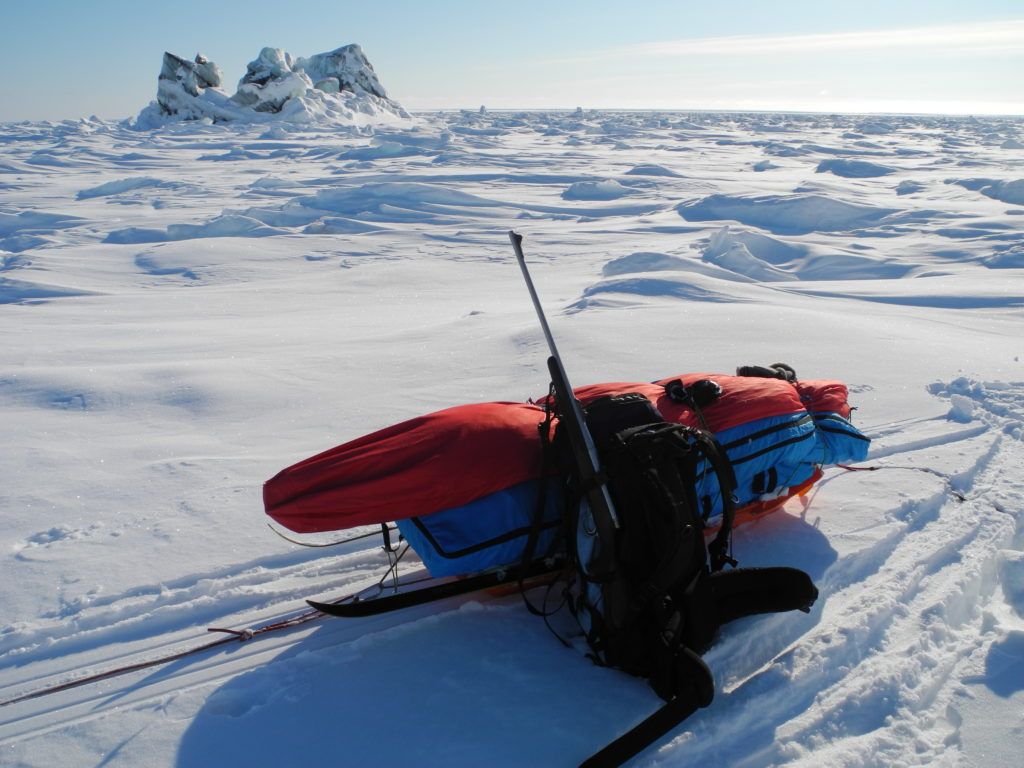 When on the move I broke trail with my pulk while Lonchas followed, hauling his own sled, some meters behind. From time to time I stopped to take a good look around, a look at Lonchas – who would stare back with its eyes so expressive – and to soak in the unique, wonderful environment. 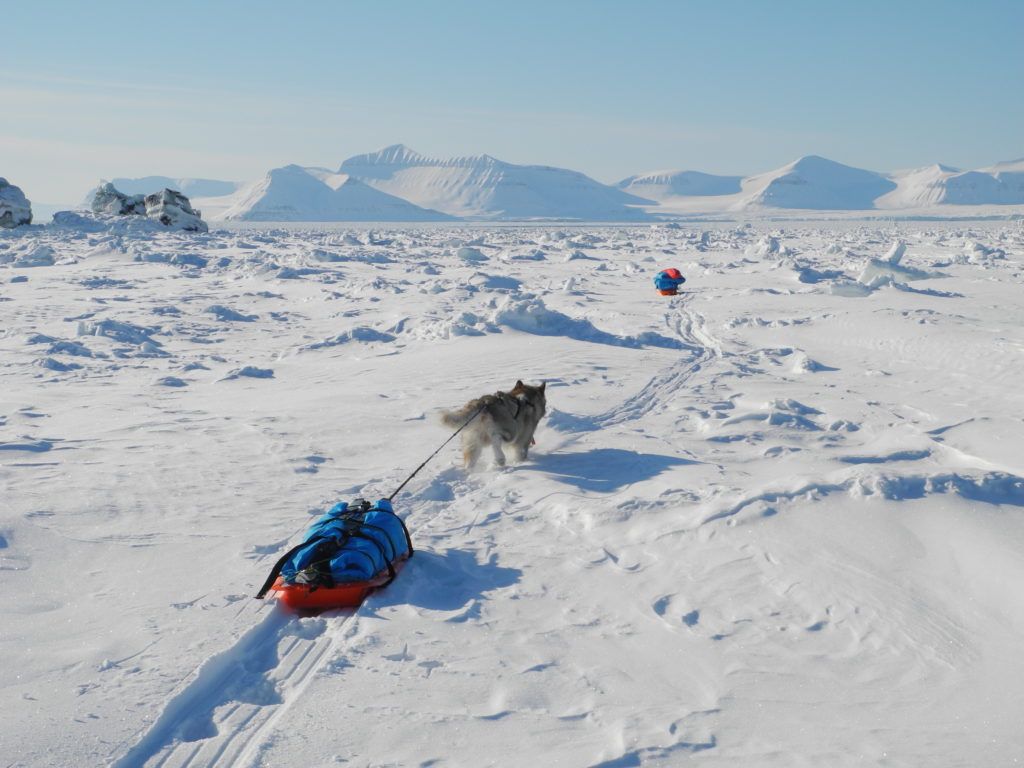 The sea ice is quite different from Lapland lakes. Here, the tides forge pressure ridges, creating a rather rugged terrain. There are no slopes to climb, but the going is not easy. 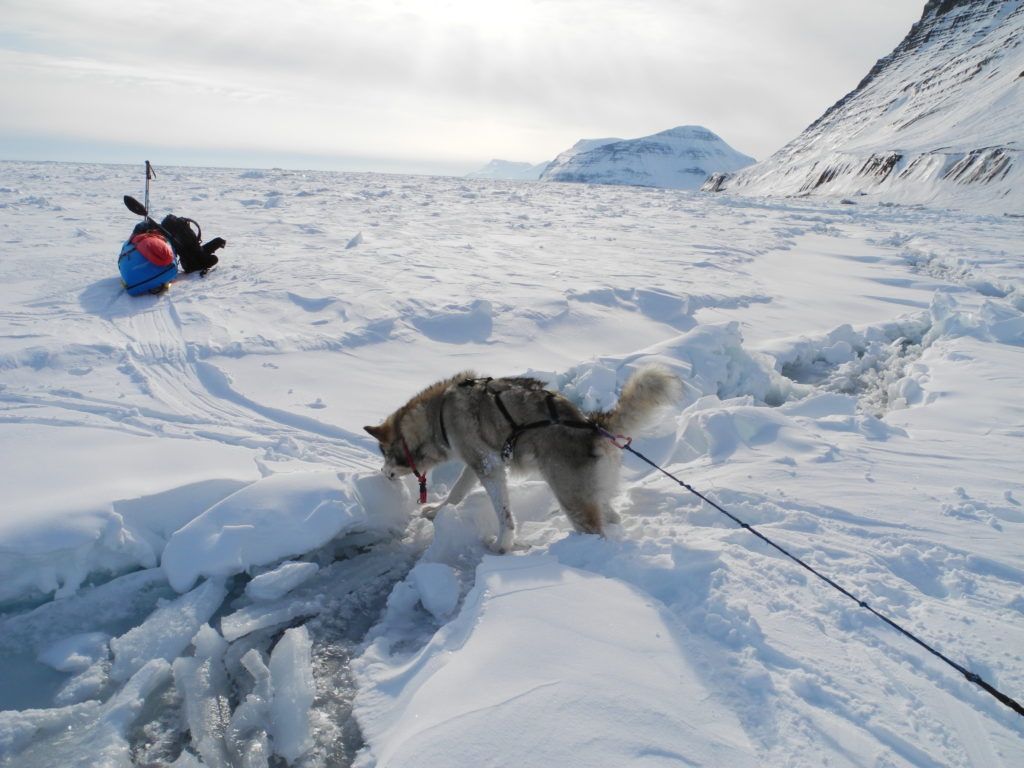 During the three first days, the terrain was firm, however in some areas there was a layer of soft snow hiding a mass of extremely hard crumbled sea ice, which hurt Lonchas’ paws and legs. I didn’t notice as I was on skies, and Lonchas never complained. I only got aware of the situation after I saw blood stains on the snow. It was my job to evaluate and prevent my mate’s suffering. Lonchas would have just followed me until his last breath, scary as it seems. Given the harsh conditions expected this year and the information given by three other expeditions (one of which was progressing at just 500 metres per hour), I made the decision to change direction to stop heading south and turned around at Hamerbukta bay. 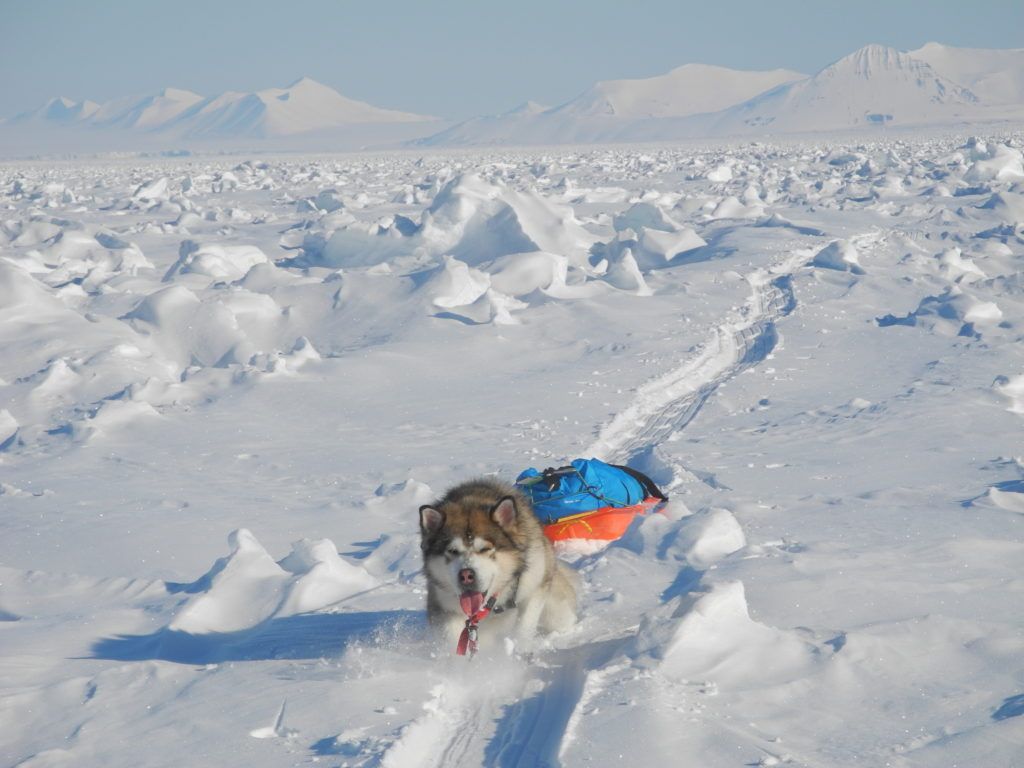 By then, bear footprints were everywhere: males, females, and also calves. I took all possible precautions and switched to my maximum alert mode. Every night I looked for a camping spot far from chaos or pressure ridges, and chose instead smooth pans with good visibility in every direction. 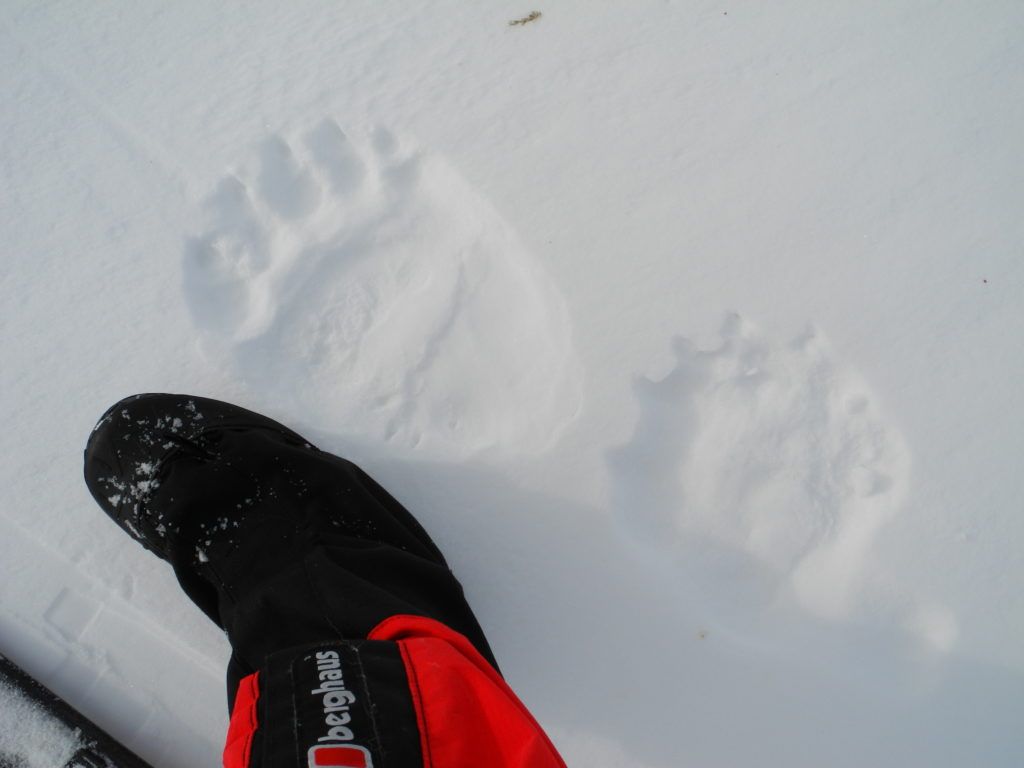 Lonchas slept out of the tent, tied up and well within my sight. Should he bark in the night, I would need to follow the dog’s gaze in order to find out the reason of the barking. He never made a sound though. 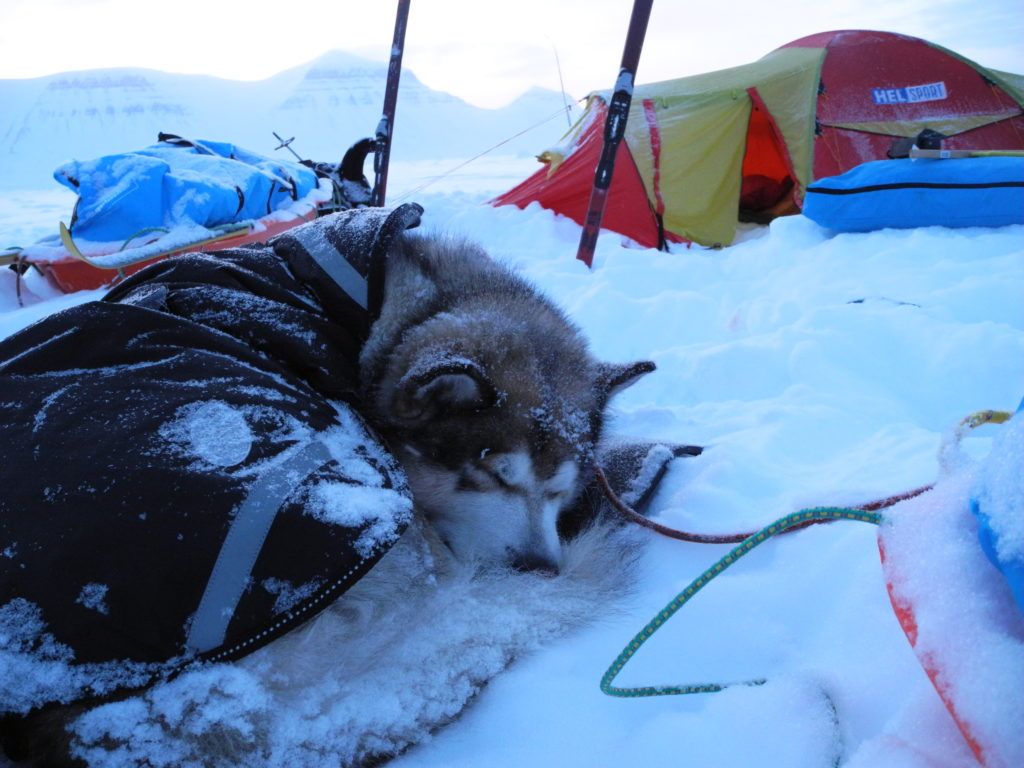 I also had an anti-bear fence, which I had designed myself. I can lay it around the tent with the help of a fishing rod in just over a minute. Should something trespass the marked perimeter, a flare is automatically shot. That’s enough to get me on my feet and grabbing the fare-gun or the rifle that I always keep at hand. I even used to leave a knife nearby, in case I had to rip the tent open and flee. 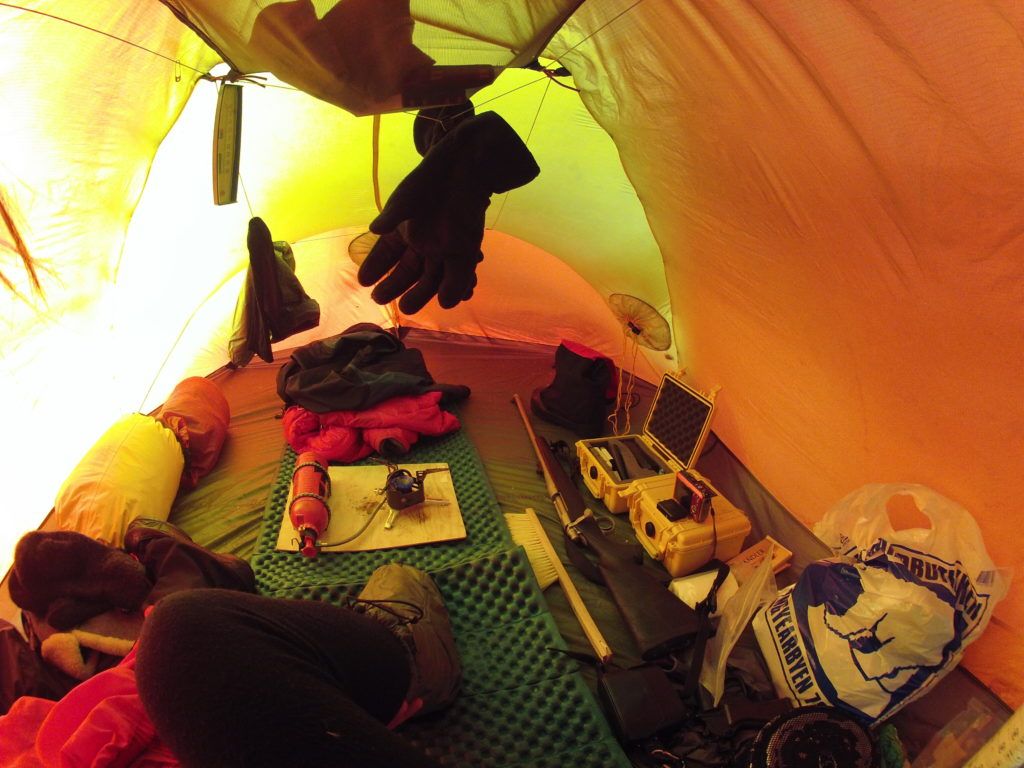 The weather was kinder to us than expected and, except for one day that we were force to stay put, waiting out a wind storm, days were cold, sunny and full of a wonderful solitude. 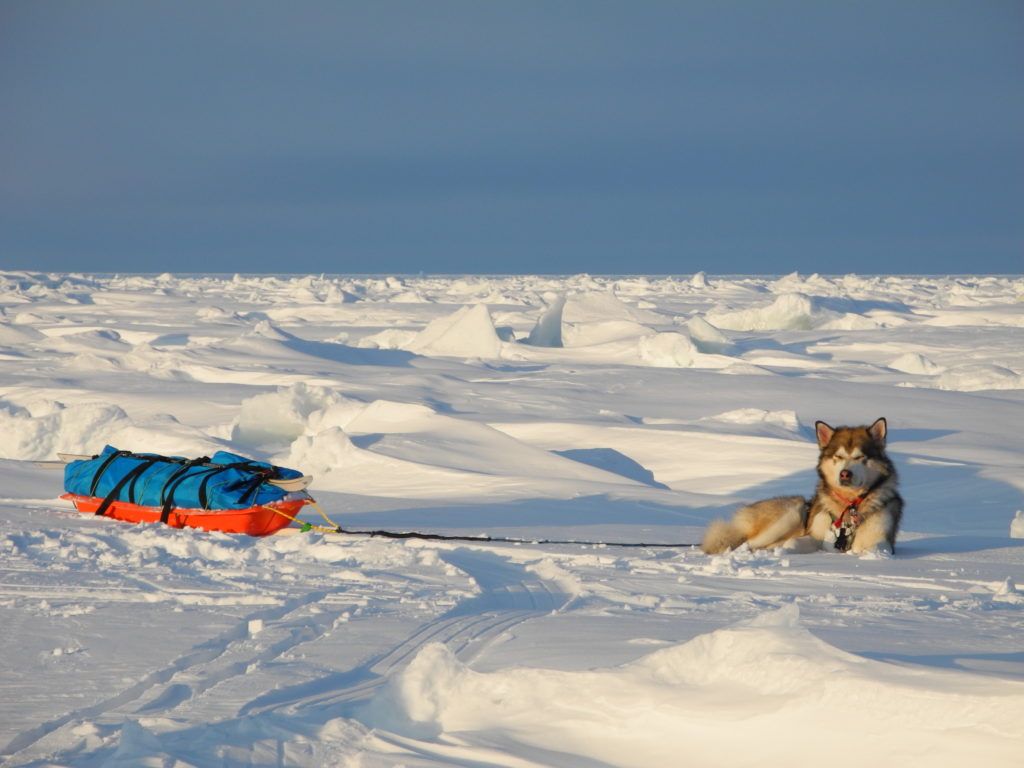 The closest bear-encounter we had was near Hamberbukta, in the southernmost area we visited. I was dismantling camp, a task I would always start by retrieving the bear-fence and letting Lonchas loose to wander around, mark his territory on every suspicious ice block and roll over on the snow. I kept the rifle to hand, just in case. I took no effort in scouting the plains around – instead, I looked to Lonchas and followed his gaze. The bear was in the distance and stopped to look. I believe he considered the possibility of coming over and checking how good to eat we were, but then changed his mind. I was not afraid. Lonchas didn’t bark, didn’t move, didn’t attempt to break into a run towards the animal. It was actually a fascinating, utterly special moment. The three of us just staring at each other for a while, without moving, without losing temper, until the bear felt its curiosity satisfied and left. He simply didn’t care for us. 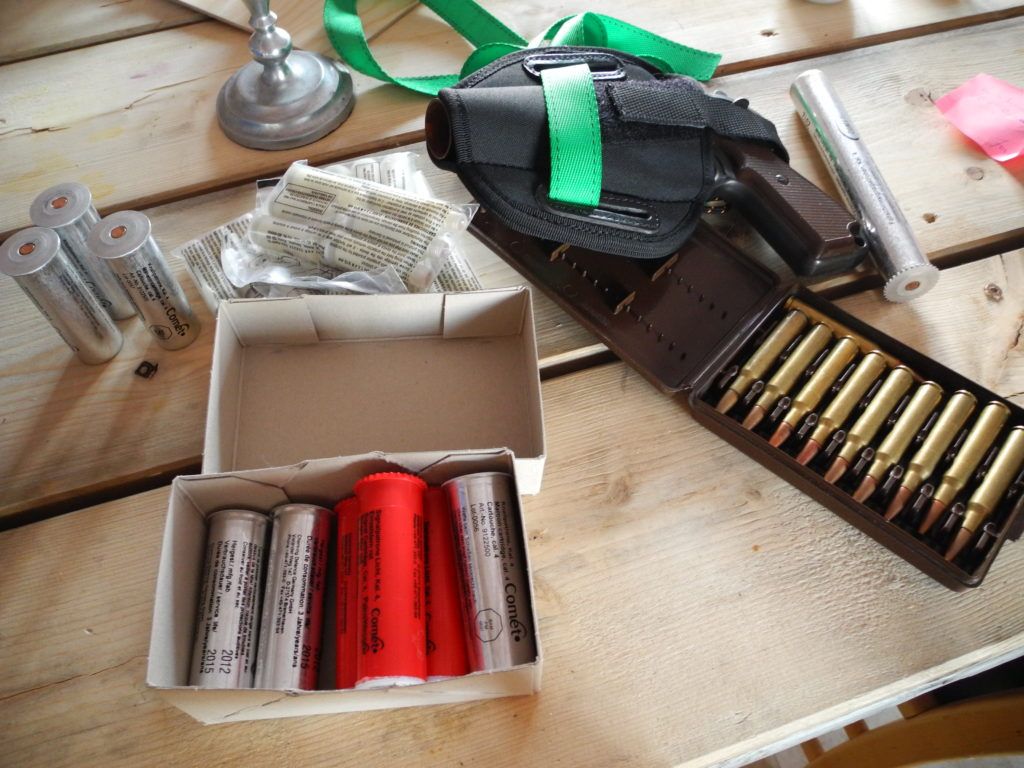 Unfortunately, not all bears are so experienced. Young ones recently departed from their mother’s protection are usually bold, ready to charge against anything, and hungry as only young lads can be. These are the most dangerous, as also are the very old ones, whose hunting skills are tainted by age, and wander the ice desperate and starving. Believe me, you don’t want to meet these animals. 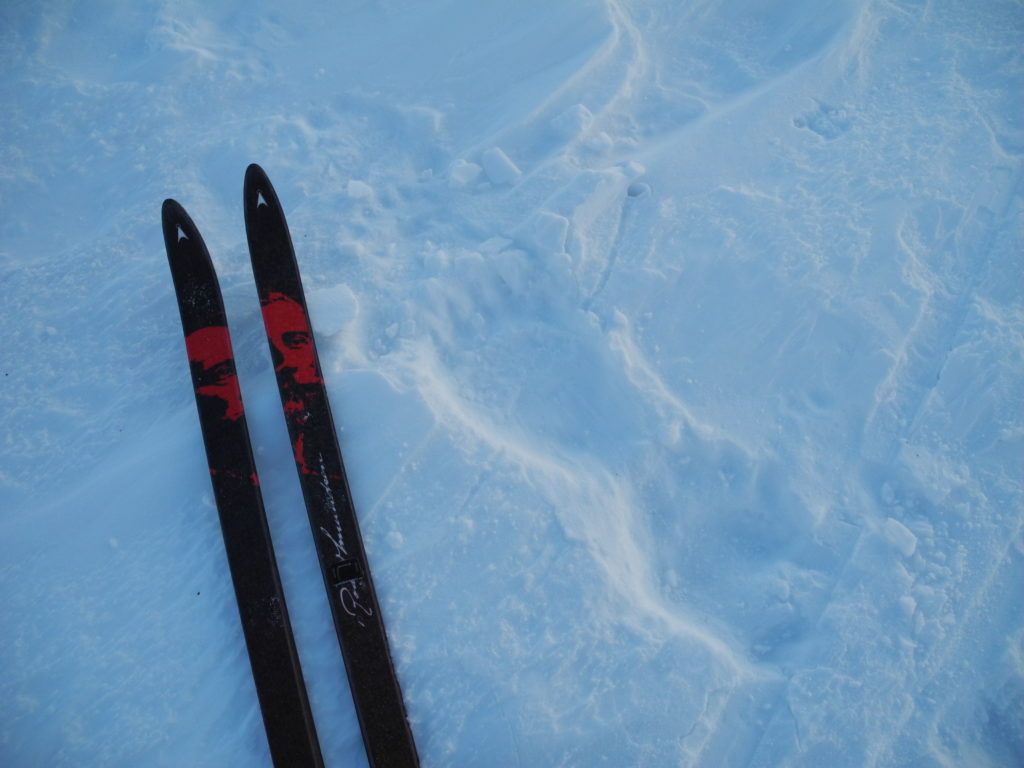 After exiting the National Park, we left the sea ice at Kvalvagen bay towards Storbreen glacier. We climbed up and traversed it to the neighboring Paulabreen glacier. Once there we enjoyed stunning views, better terrain and fewer chances to encounter bears. We had set course towards Sveagruva, a mining “town” on the coast of Van Mijenfjorden, which took three days to reach. 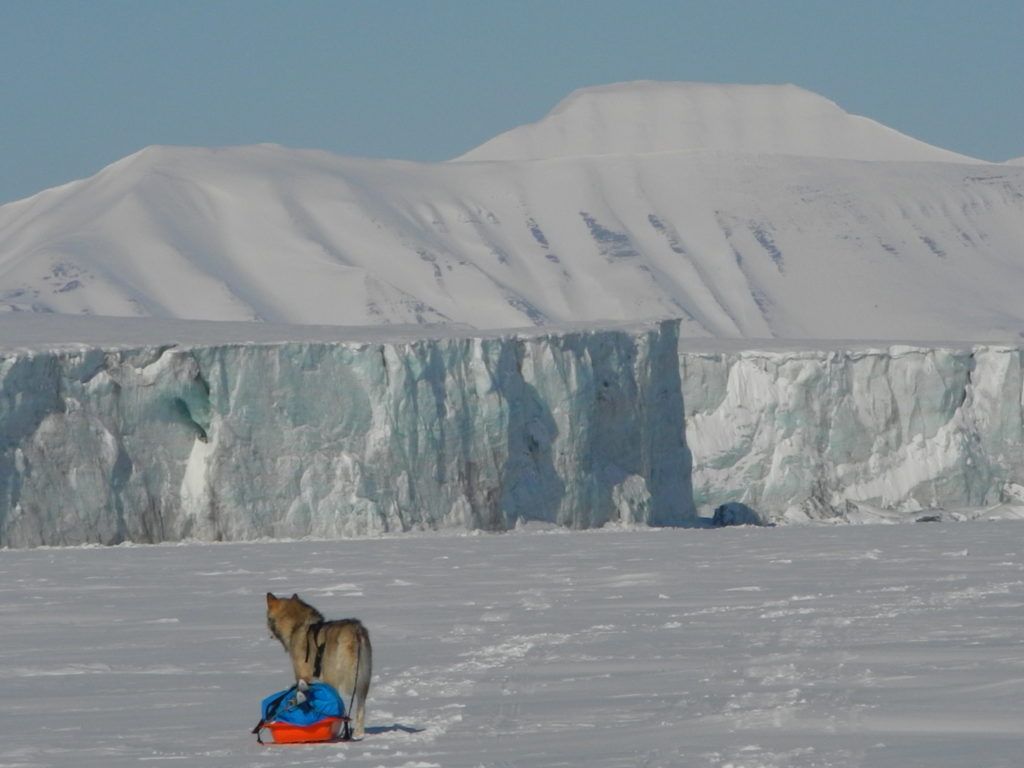 The mine provides a rather surreal view. The surrounding hills look grey with the snow covering them profusely dusted in coal. There are some kilometers of roads built along the town, towards the harbor and some other mines nearby. There are heavy machines flattening and keeping a snow landing strip, skidoos, workers walking around and noise – unexpected, annoying noise from trucks and sirens. I had been told strangers were not welcome, so I camped by the sea shore, two kilometers away from the mining town. From my camping site, I could hear a faint roar of heavy trucks. I desperately missed the silence. 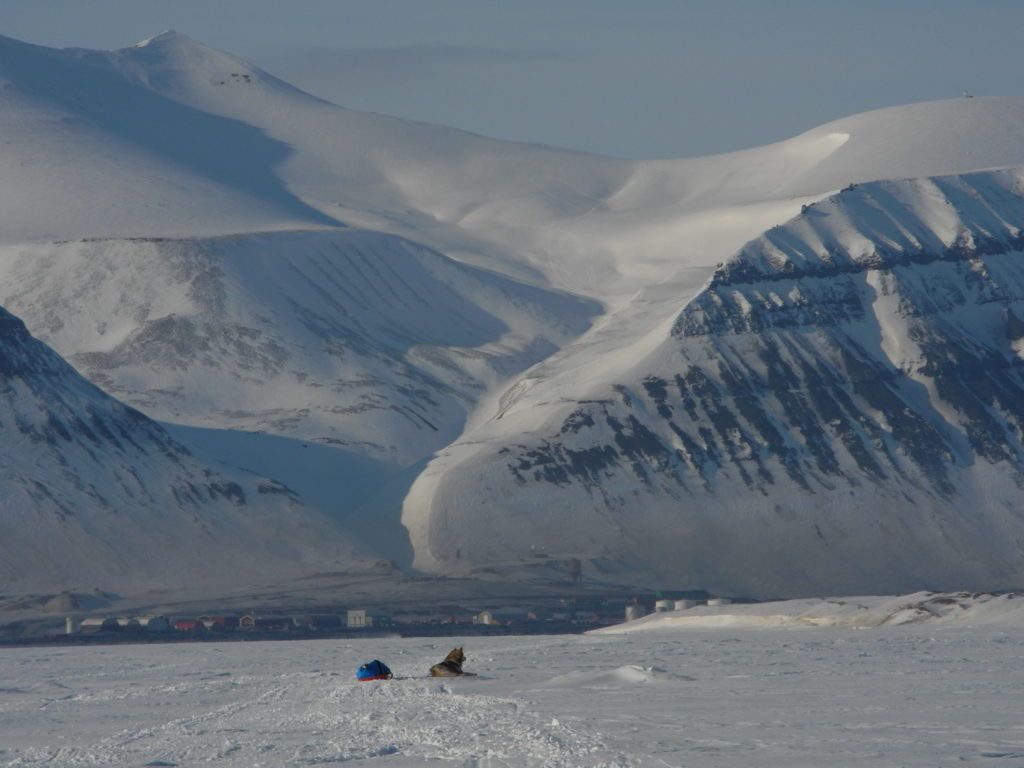 We set off late on the next day and, without looking back to the mining town, went return to the sea ice following the coastline by some ice trails that were supposed to take me to Slakbreen glacier. After a bunch of hours though, the directions were confusing, the way different from the lines on the map. Suddenly, there were cars passing by in the distance! Cars in the middle of a glacier was a sight far beyond my idea of surrealism. Luckily, a worker soon passed by on a skidoo and I asked him about our location and if it was really cars what I was seeing. There was a new mine being exploited and they had built a road around it. I was on top of Martabreen glacier and my options were either to turn around and follow those gloomy roads, or jump ahead and slide down the glacier towards Reindalen valley. I didn’t think twice.

The ride down was long and straightforward – a pleasure for any skier. To hell with the roads, the skidoos and the mines! An hour later we were camping for the night on the Martabreen’s moraine. Again, there was silence and peace. 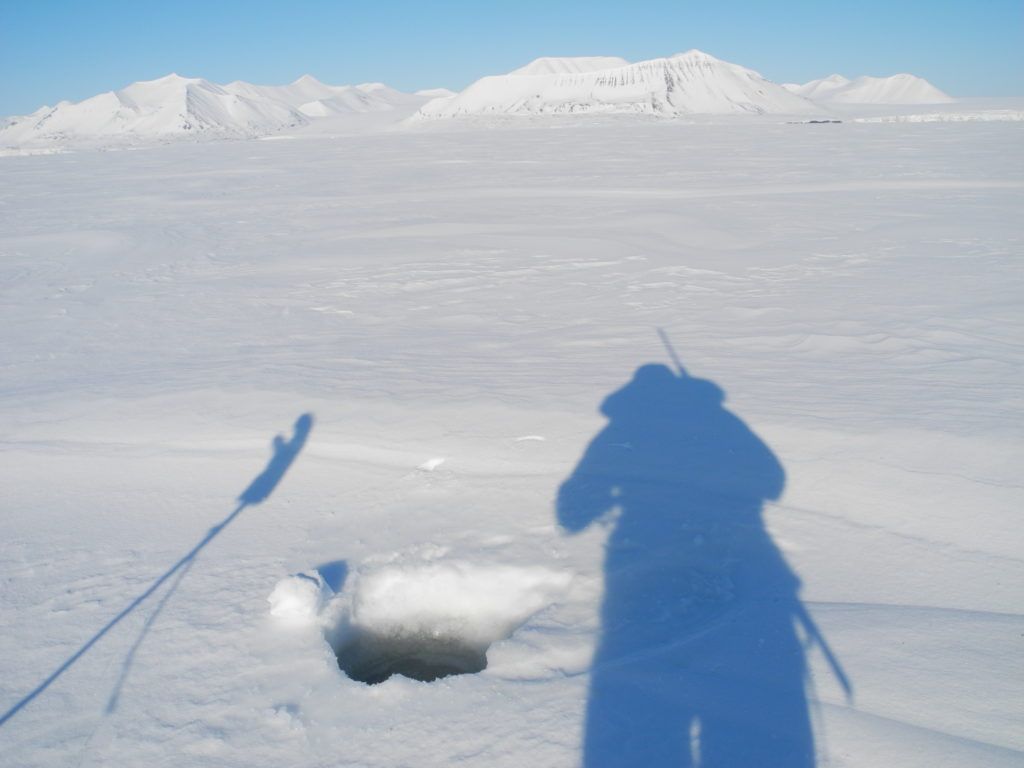 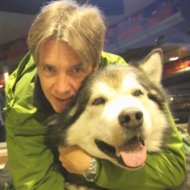 Jose Mijares
I worked as a tourist guide in Europe, North Africa and Arctic regions. I climbed over 100 summits in the Andes. As well in Africa, South East Asia, New Zealand, Tasmania, Australia, Alaska and Mexico. I spend 4 winters backpacking on Asia. I had completed crossings across Greenland, the Baltic Sea, Patagonia's North Icecap, Lappland or Svalbard. I paddle the most important rivers in Lapland.

Be the first to review “In search of Silence” Cancel reply