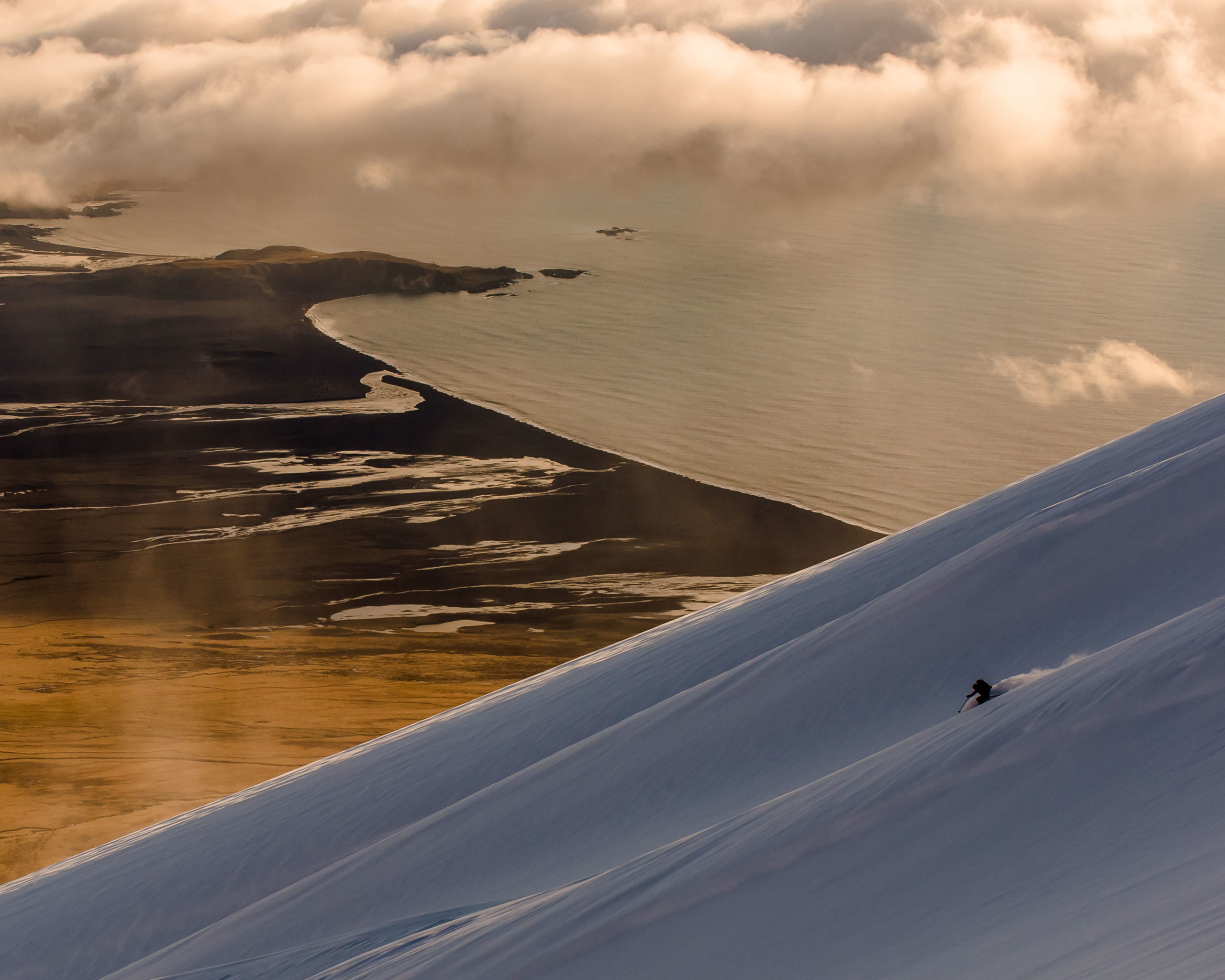 The Aleutian Chain is one of the most beautiful and underappreciated landscapes. A necklace of volcanic islands stretching between Russia and Alaska, reaching from crashing waves to lofty peaks; some are extinct and glaciated, others bubbling and belching.
If you've contemplated skiing in these mountains, you're among a small handful. Not many people recognize the landscape or its name; even less have been there. Suddenly you too are looking to book a flight. 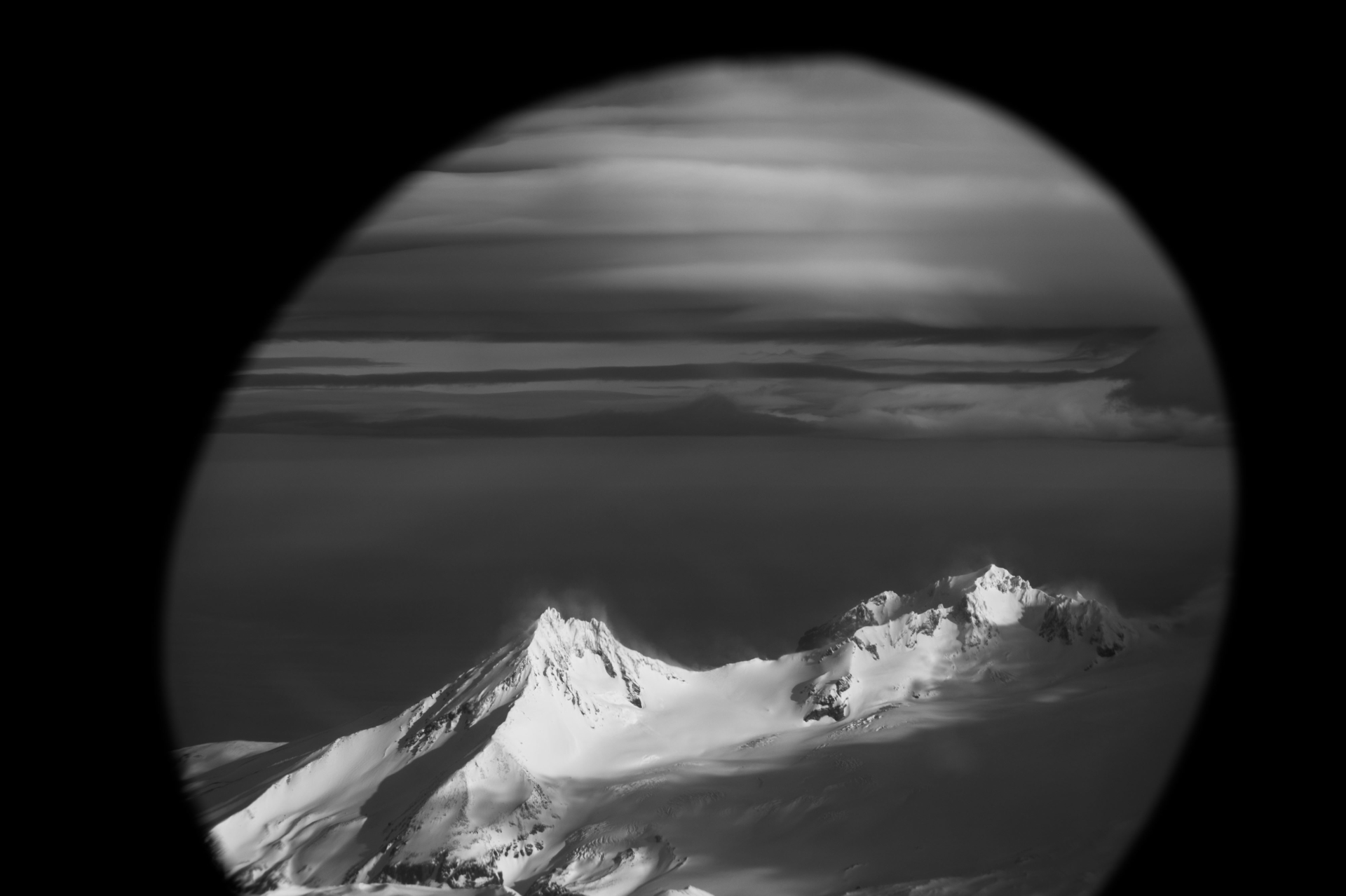 The Aleutian's jagged peaks appear in our plane window, for the first time. 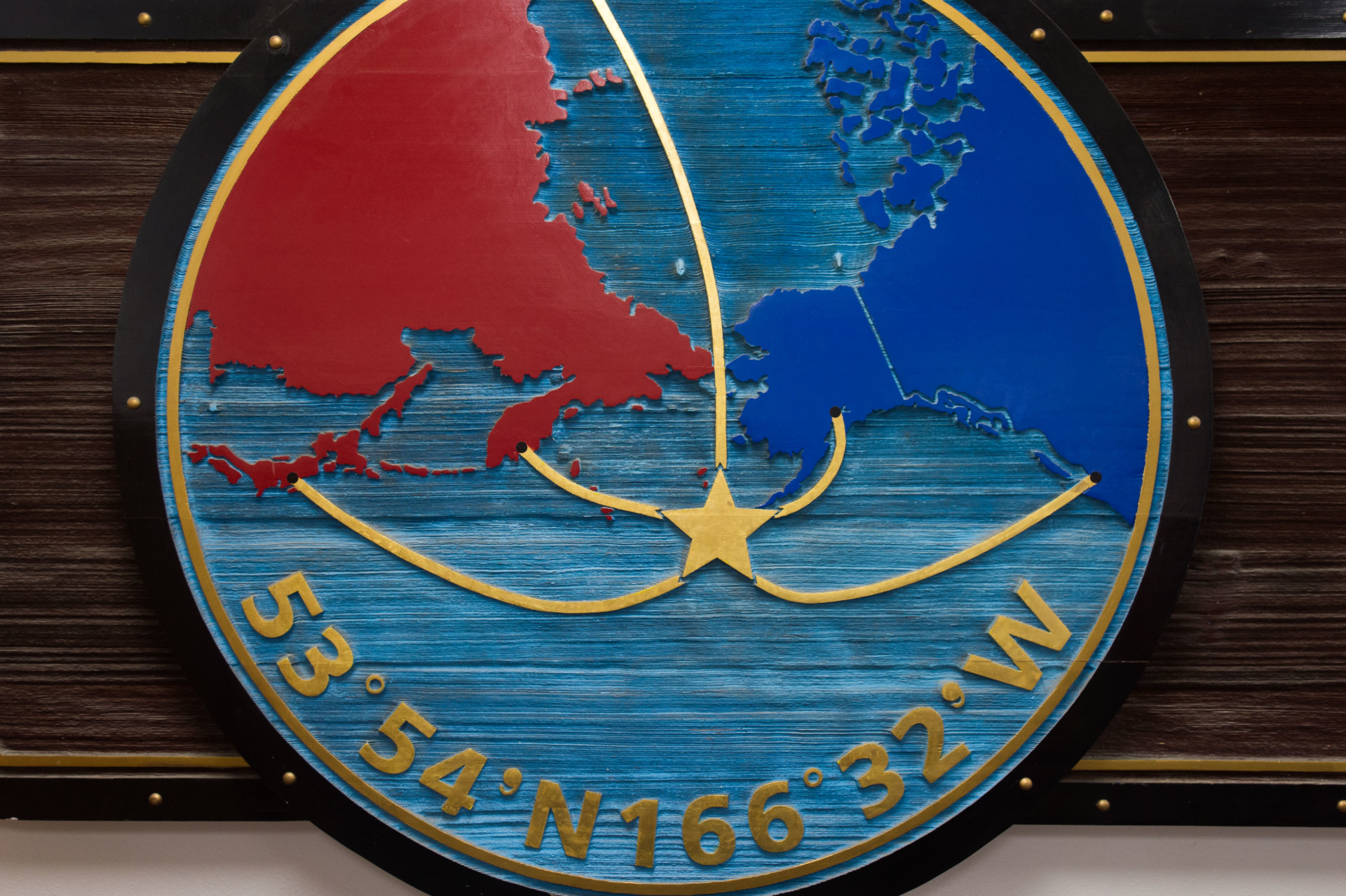 Not a chairlift to be seen, for a couple thousand kilometers.

There are several reasons why not many do; half the islands are inhabited by bears the size of small cars, only a couple of islands have runways to land a plane, and the last and possibly most significant reason: some of the worst weather in the world.
This chain of volcanoes creates a perforated seawall that divides the comparably warm Pacific Ocean from the cold Bering Sea. The sea's temperatures affect the air above and create two fronts of weather locked into perpetual battle. At one most stormy moment, we hid in the cabin that was pummeled by a gale-force wind that would switch directions every minute. Or, to say it another way, you can never pee with the wind at your back. 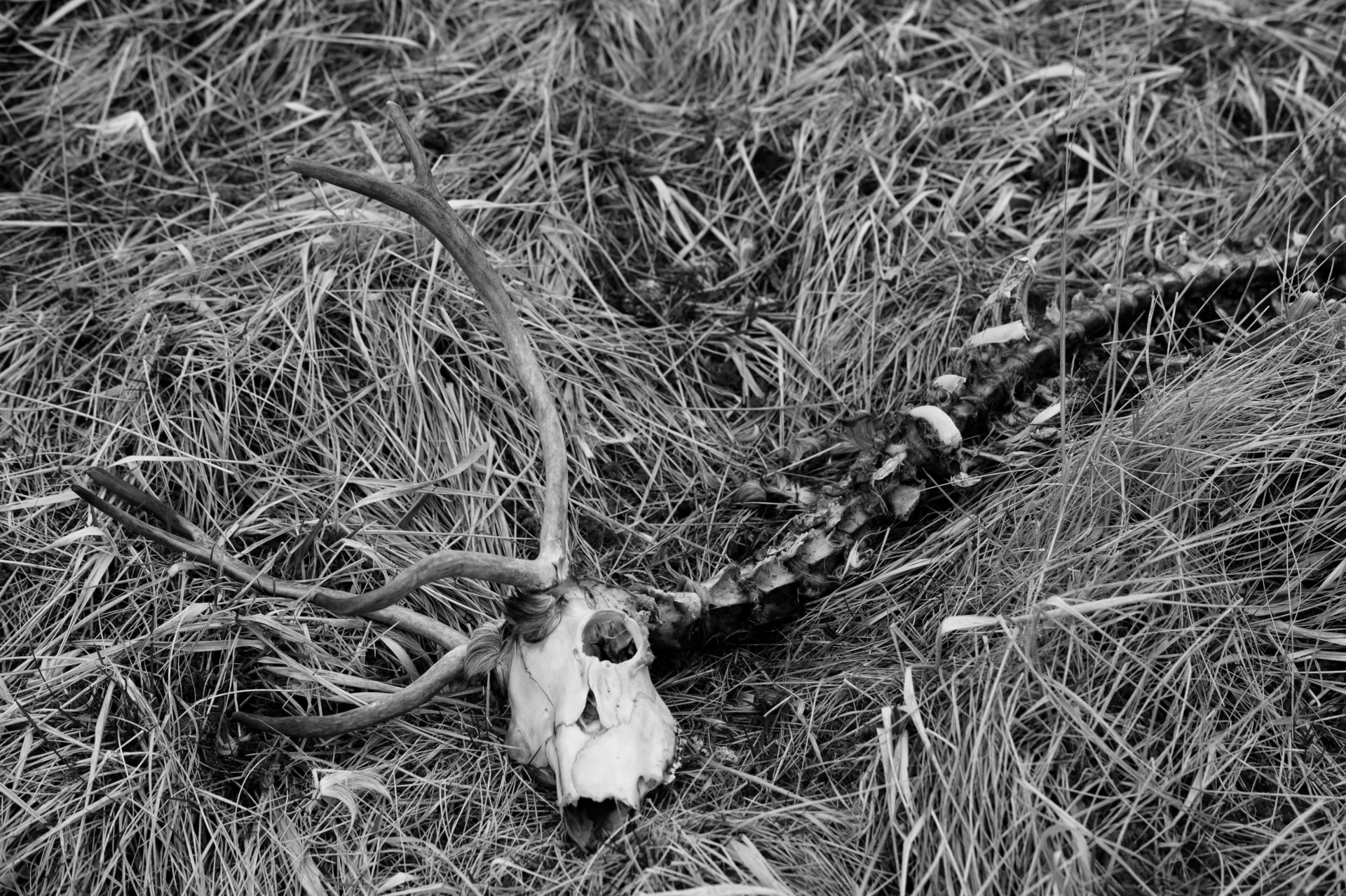 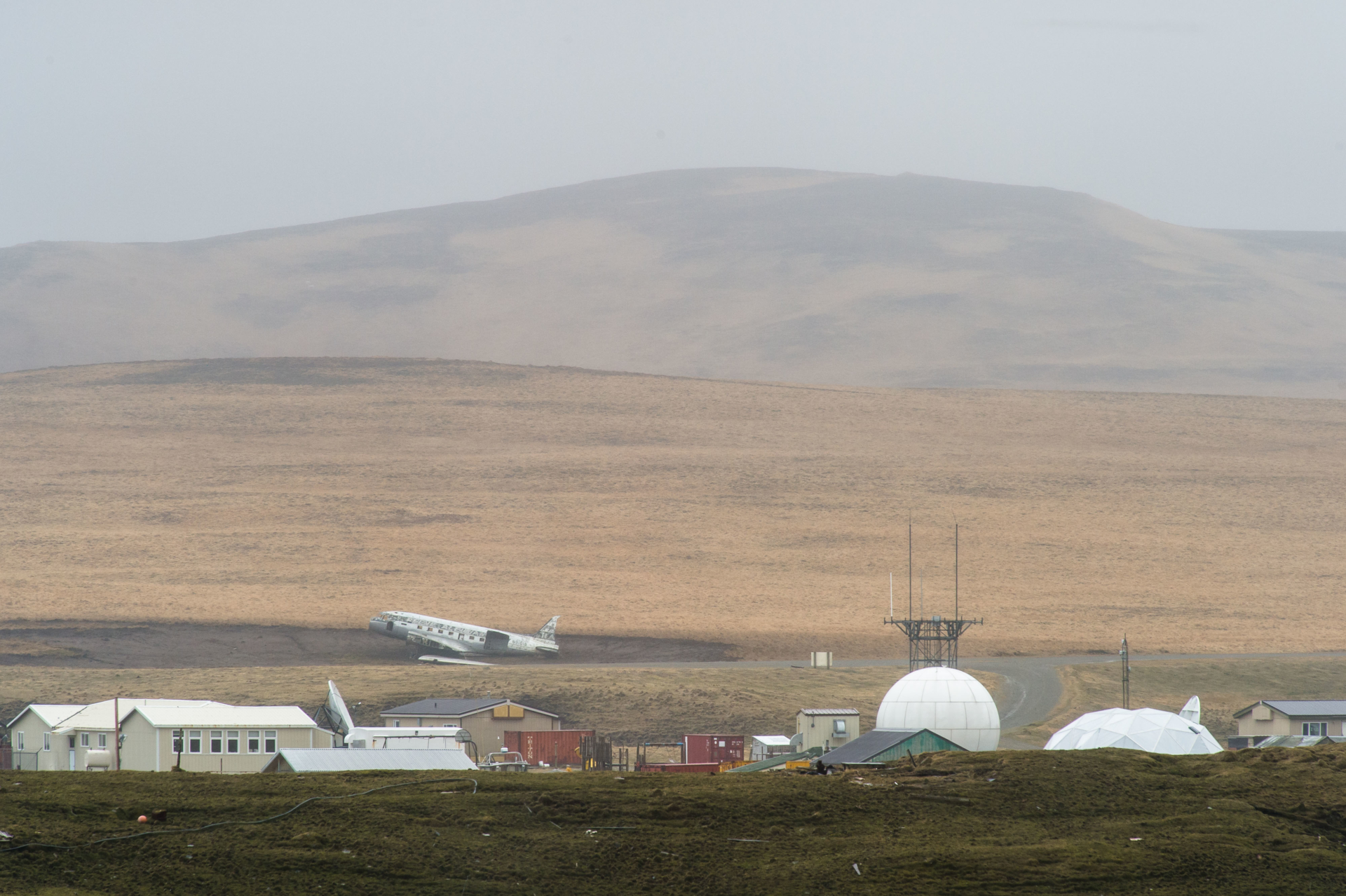 The Metropolis of Nikolski, AK

On day one, we landed in a town named Nikolski and drove past the skeleton of a crashed commercial airline plane from years past. Its morbid presence speaks volumes.
Nikolski claims to be the longest continually inhabited place on earth. Aleut people have hunted, fished, and thrived in the remarkable landscape, despite years of economic and political change. The Aleutians were part of Russia and now the USA; they have been the site of nuclear weapons testing and deployment of the DEW line (the Distant Early Warning System) built by the USA and Canada to detect missiles coming over the north of the planet.
Their hunting and fishing are now paired with a destination hunting lodge; they come for prized Caribou to a wild, stunning landscape by only a couple of ATV track 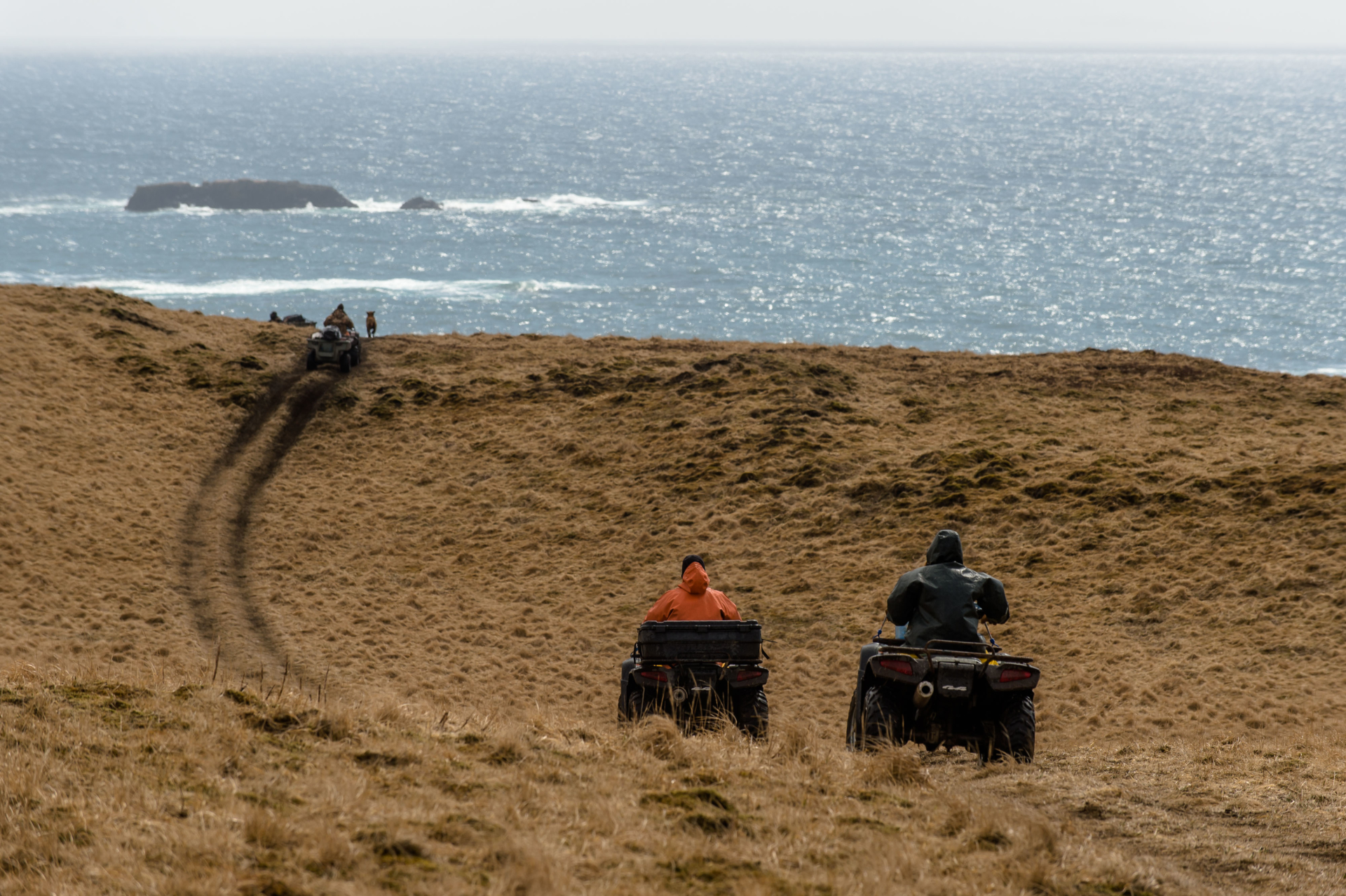 Total gridlock; Alex Taran and Tobin Seagle follow our guides through the cobweb of ATV trails crisscrossing the grassland.

Mount Vsevidof is the prize we are chasing. The volcano reaches a height of 2 kilometres even though only 7 kilometres separate its peak from saltwater. It’s conical, beautiful, extinct, but not eroded. Two days after arriving, we still haven’t seen the mountain; the clouds haven’t parted. 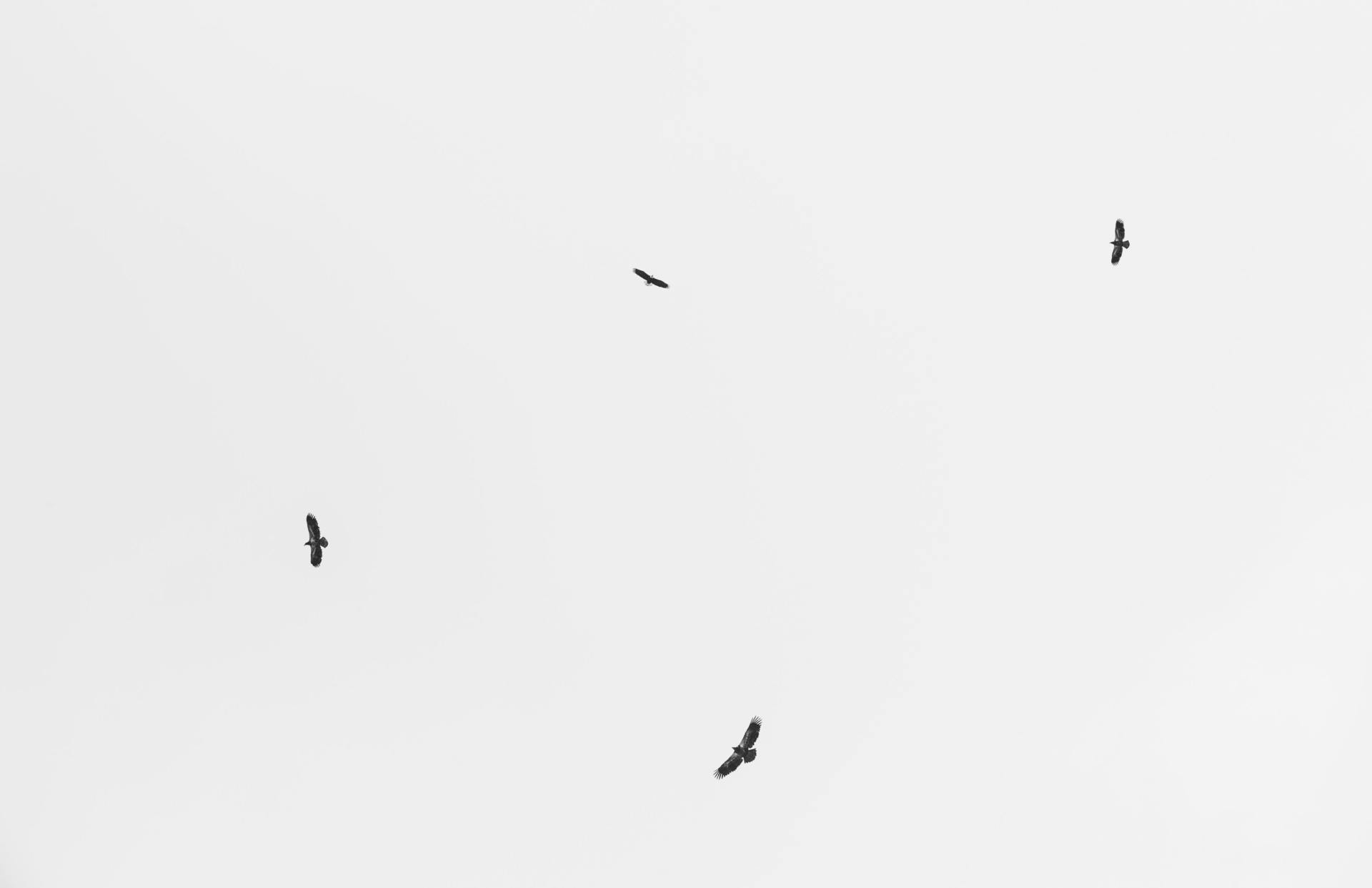 The hunting guides left us with keys to 3 ATVs and one small outpost cabin, with the instruction to be careful not to burn too much wood; there isn’t a single tree on the island. The only fuel is driftwood from the beach. There are eight days until our flight out, but only three of them end up being promising enough to leave the vicinity of the cabin.
On the first day outside the cabin, we begin with the grand opening — a pearly white pyramid standing on the horizon. We drive a convoluted track across the grassy tundra, weaving through volcanic trenches and streams, doubling back, and bashing over polished round boulders. 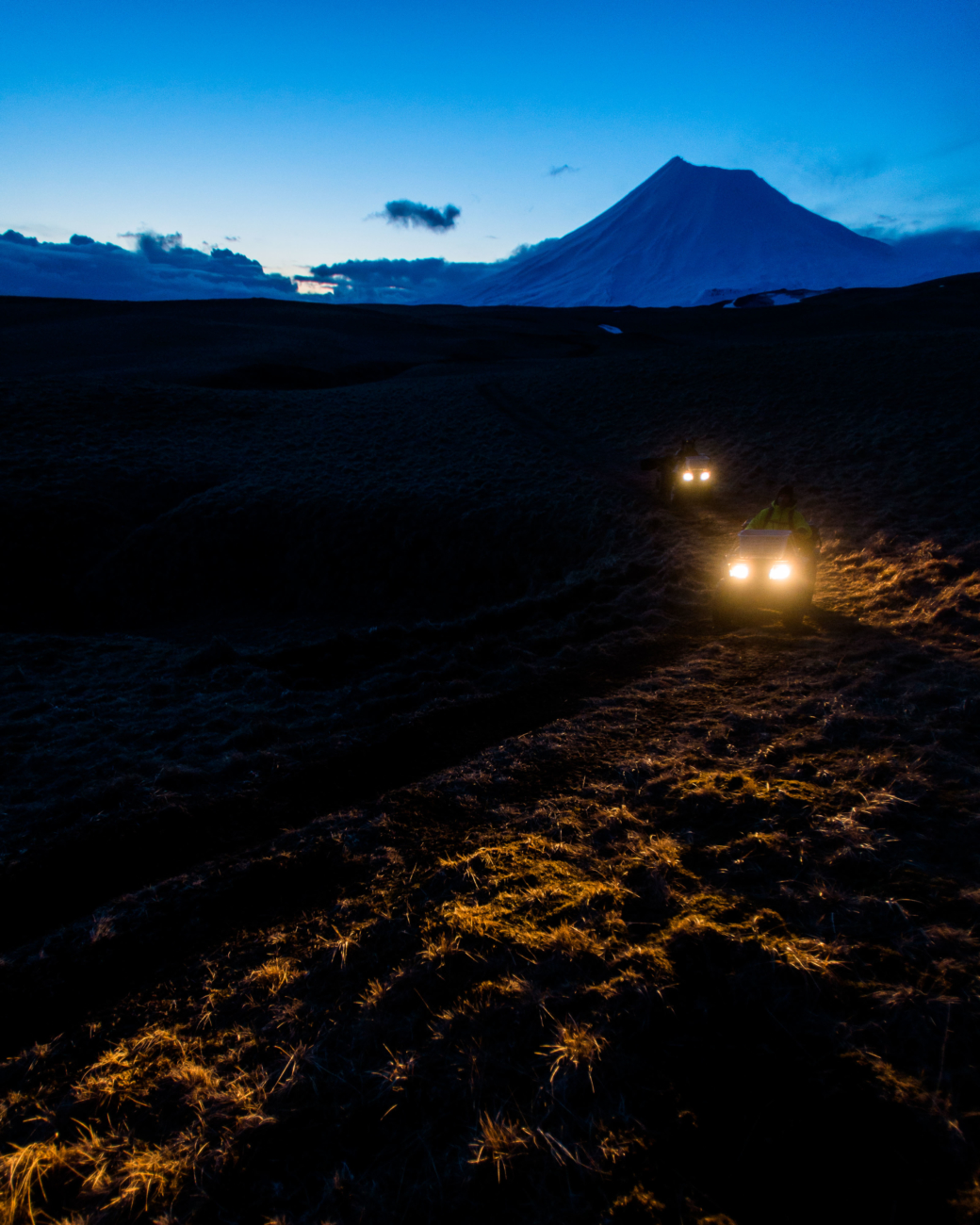 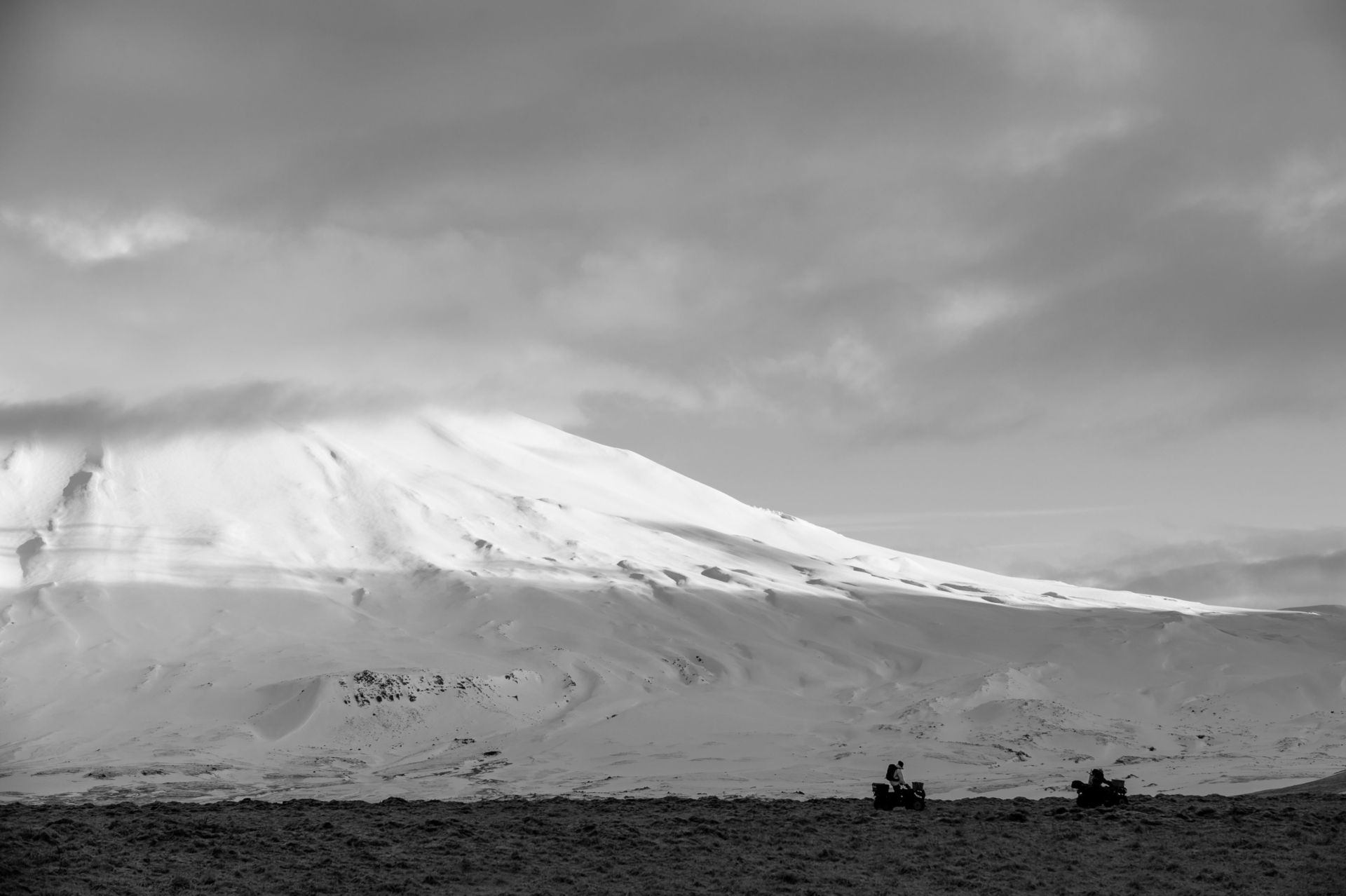 Look up, way way up.

Skiing up and down a volcano comes with unease; not much about them inspires feelings of calm. Their smooth broad face provides infinite routes and few obvious ones. Points of safety from overhead exposure are scarce, and the exposure to wind and weather becomes increasingly apparent with every step. One kilometre above sea level, it feels as though we are not closer to the summit, but also looking down feels as if from an airplane.
Vapour rises off the grassy tundra; the sun's warmth lifts the morning dew. The vapour streams coalesce into clouds that follow the rising hot air up towards us. The clouds shed their moisture on us as the temperature drops. The views turn off, and the sun’s warmth disappears. It snows for hours, and we are three tiny black dots stuck in a white universe. 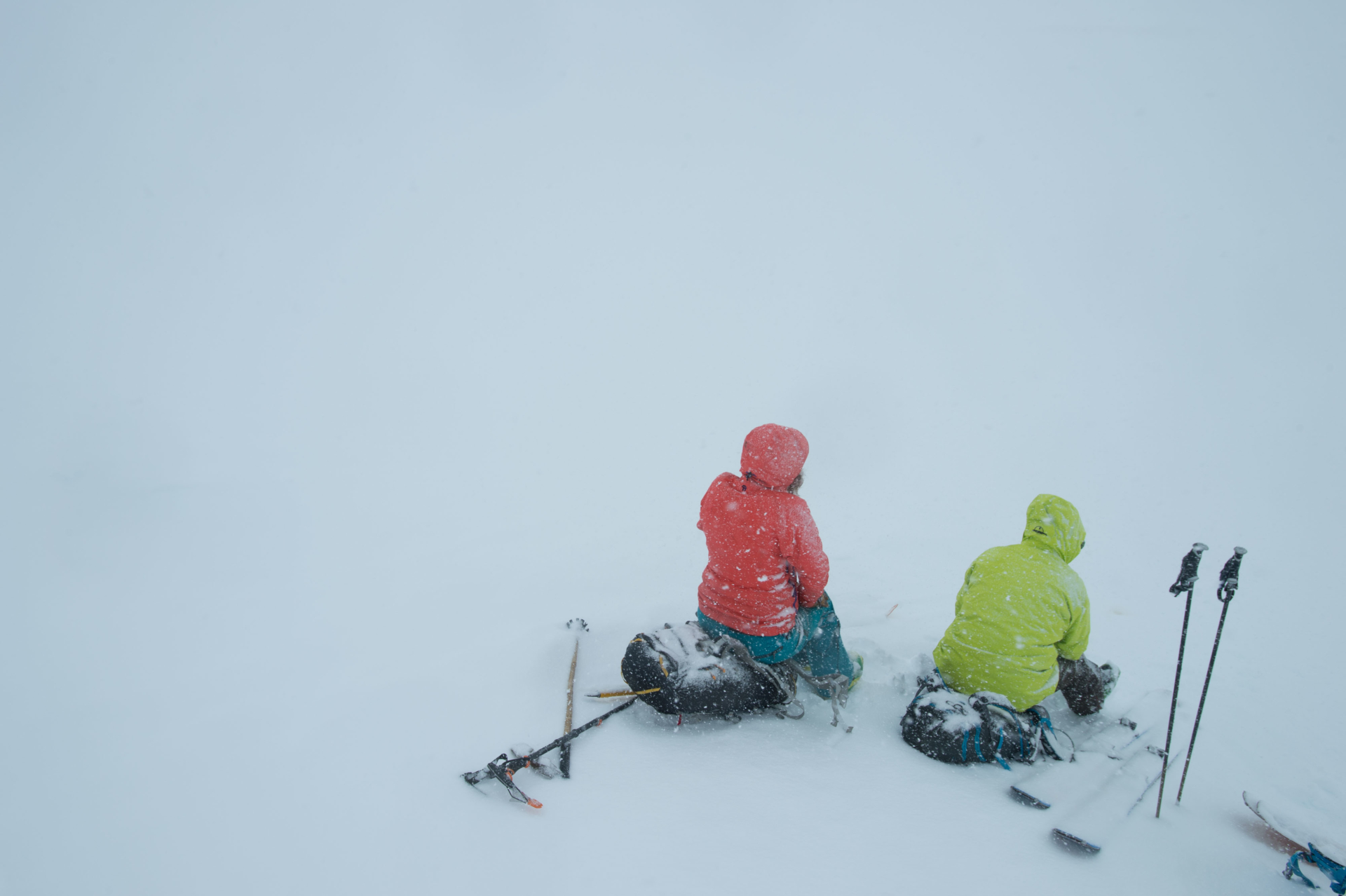 The idea of upward travel is off the table. So we sit and marinate, hoping the winds won't arrive. Hours later, some shapes and bits of the blue sky slowly load into our field of view. We go upwards once again. Slower, now with six inches of new snow. Those six inches could be a godsend; the snow we walked on hours ago felt like walking up a metal slide in dress shoes. 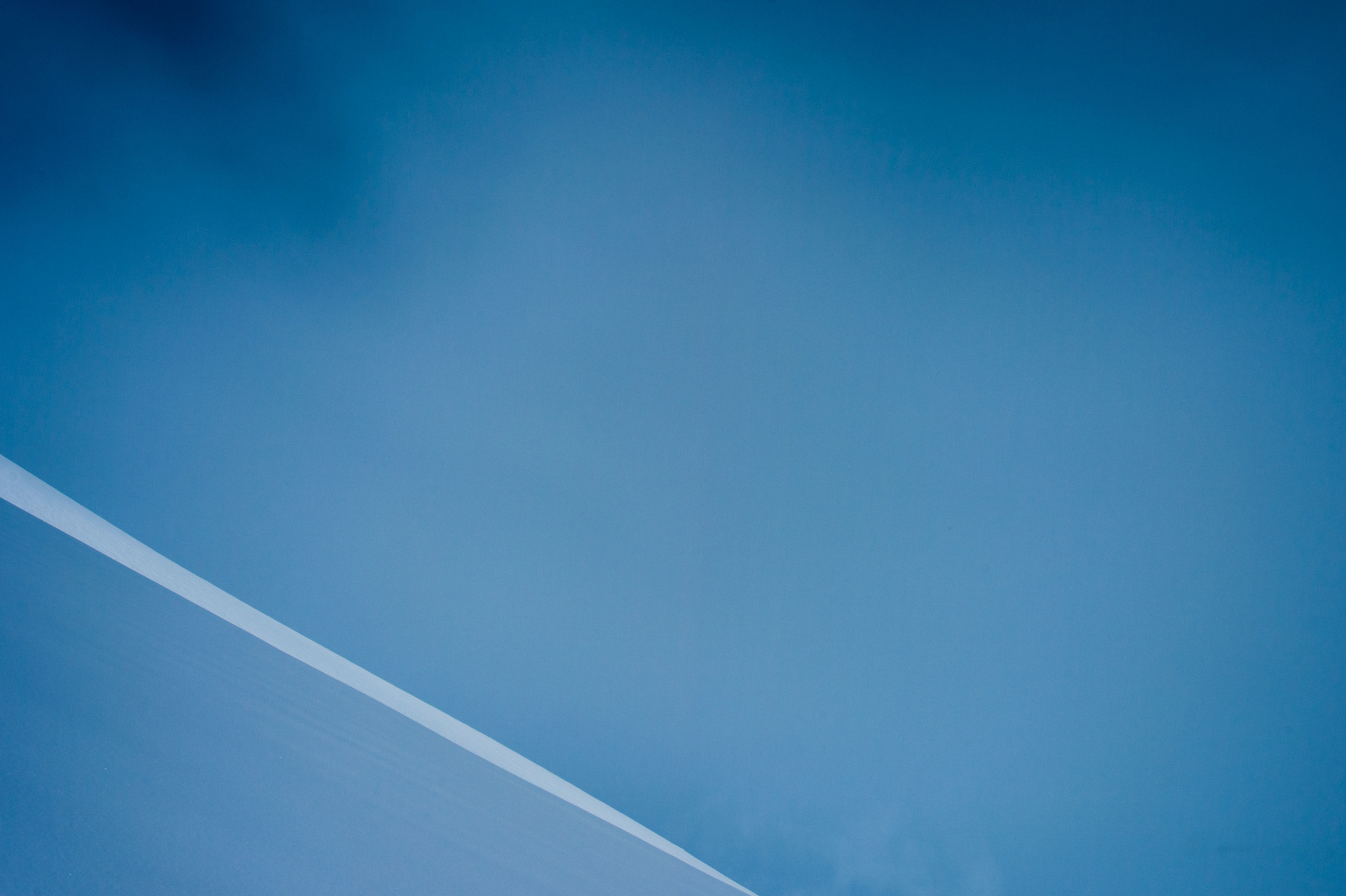 The return of contrast 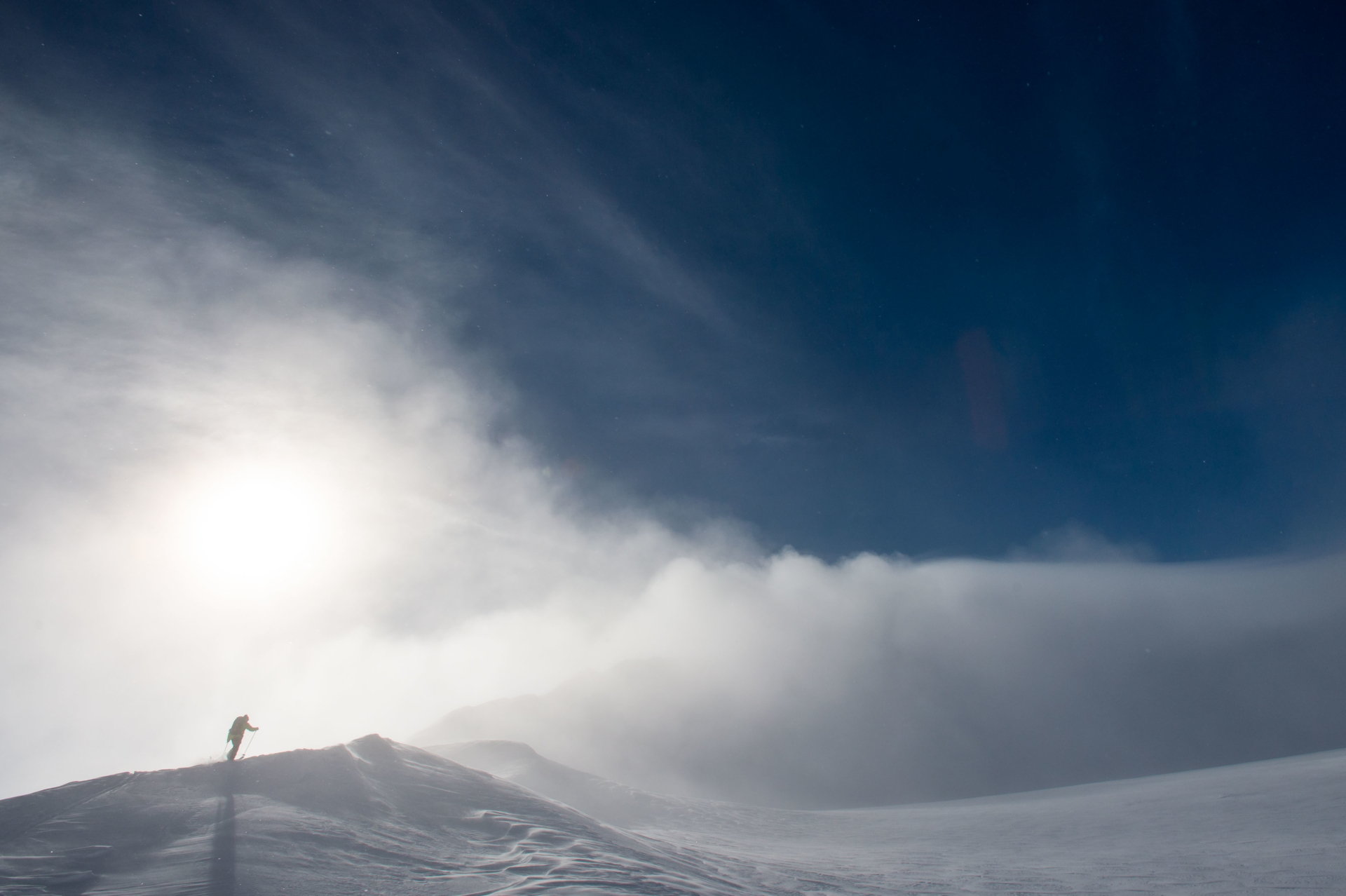 ascends the summit ridge of Vsevidof's Caldera
It’s late in the day, and a white-out descent is among the least desirable experiences to have up here. Tobin breaks trial off the face of a volcano and onto the caldera rim. Far below us, a fractal of volcanic terrain fans out towards the sea, and layers of clouds slide across the landscape in unpredictable patterns. Without visual reference, skiers can get seasick quickly up here. Then, if you mistake your trajectory slightly, you can spiral your way down the volcano ending up kilometres from your intended target.
Alex joins Tobin and me on the caldera rim, and we exchange glances that tell everyone we’re pretty concerned about getting off the mountain quickly. We also appear excited beyond belief that what might have been boilerplate got transformed into pow. 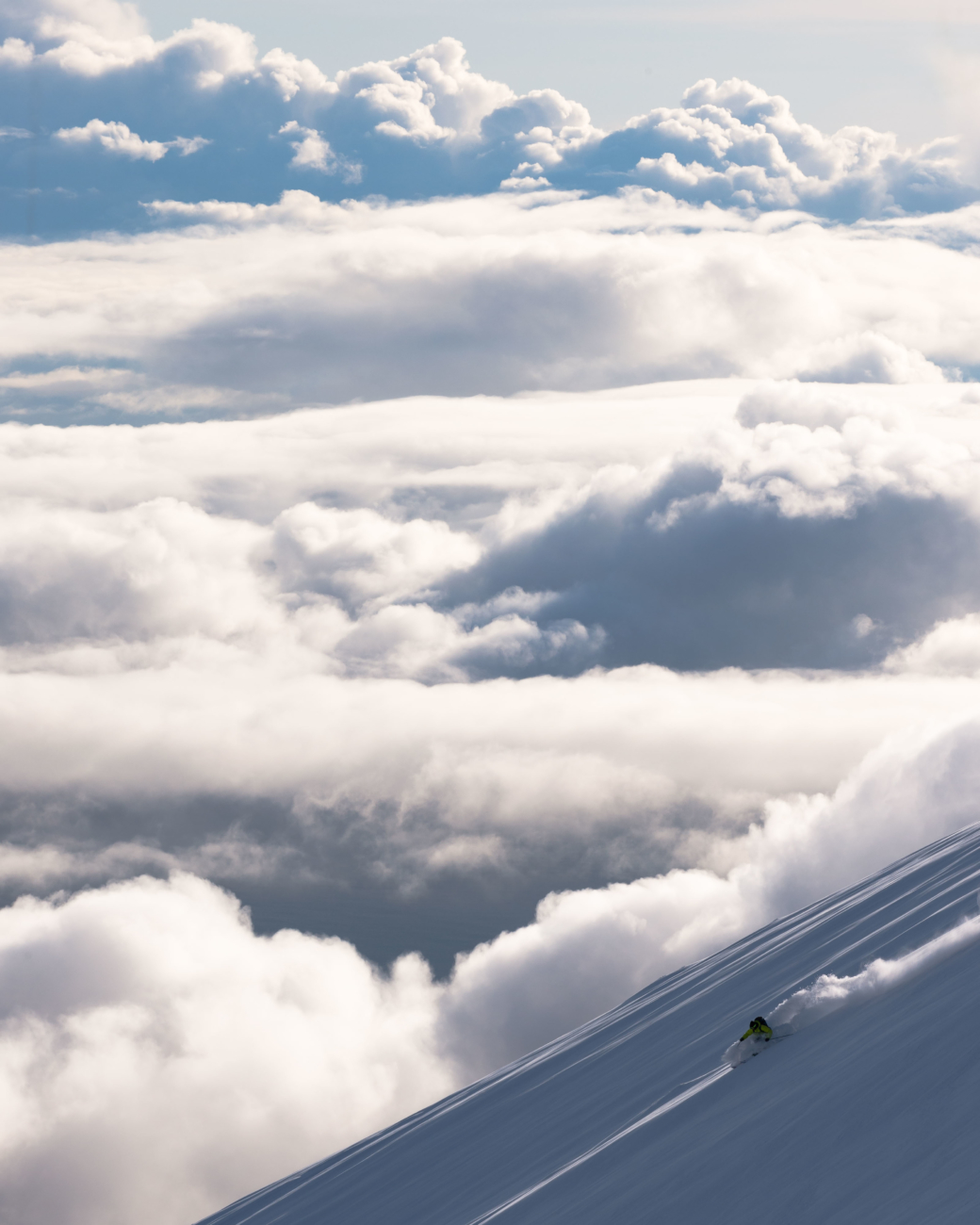 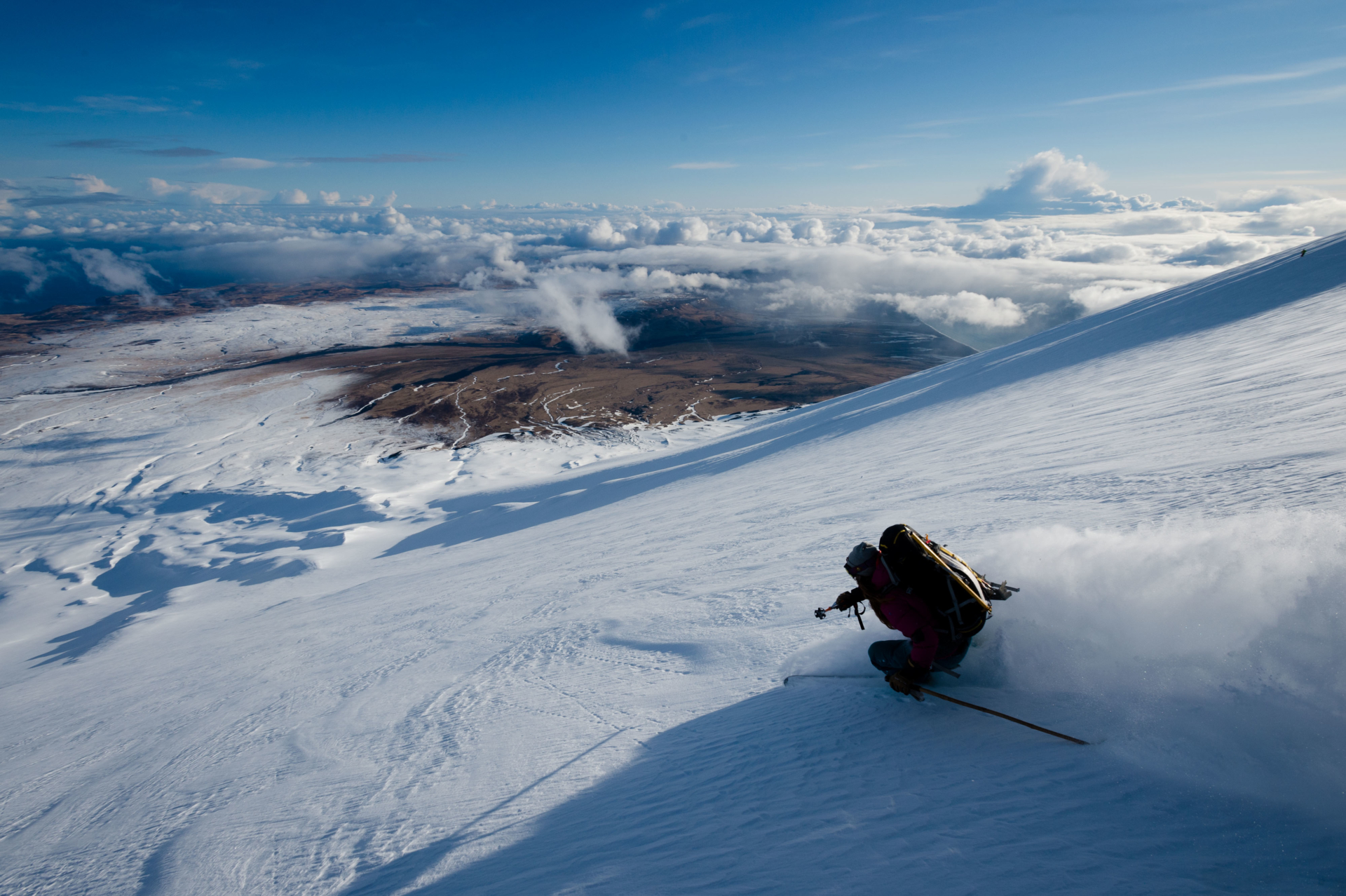 So much room for activities! Alex Taran on Vsevidof

When I drop in and feel floatation instead of chatter, the buoyancy creates euphoria in the veins. To my right, lines of swell from the Bering sea move into a long crescent-shaped bay near Nikolski. Beyond my ski tips, there are lava fields and shoreline, then water for the next couple thousand kilometres until Hawaii. 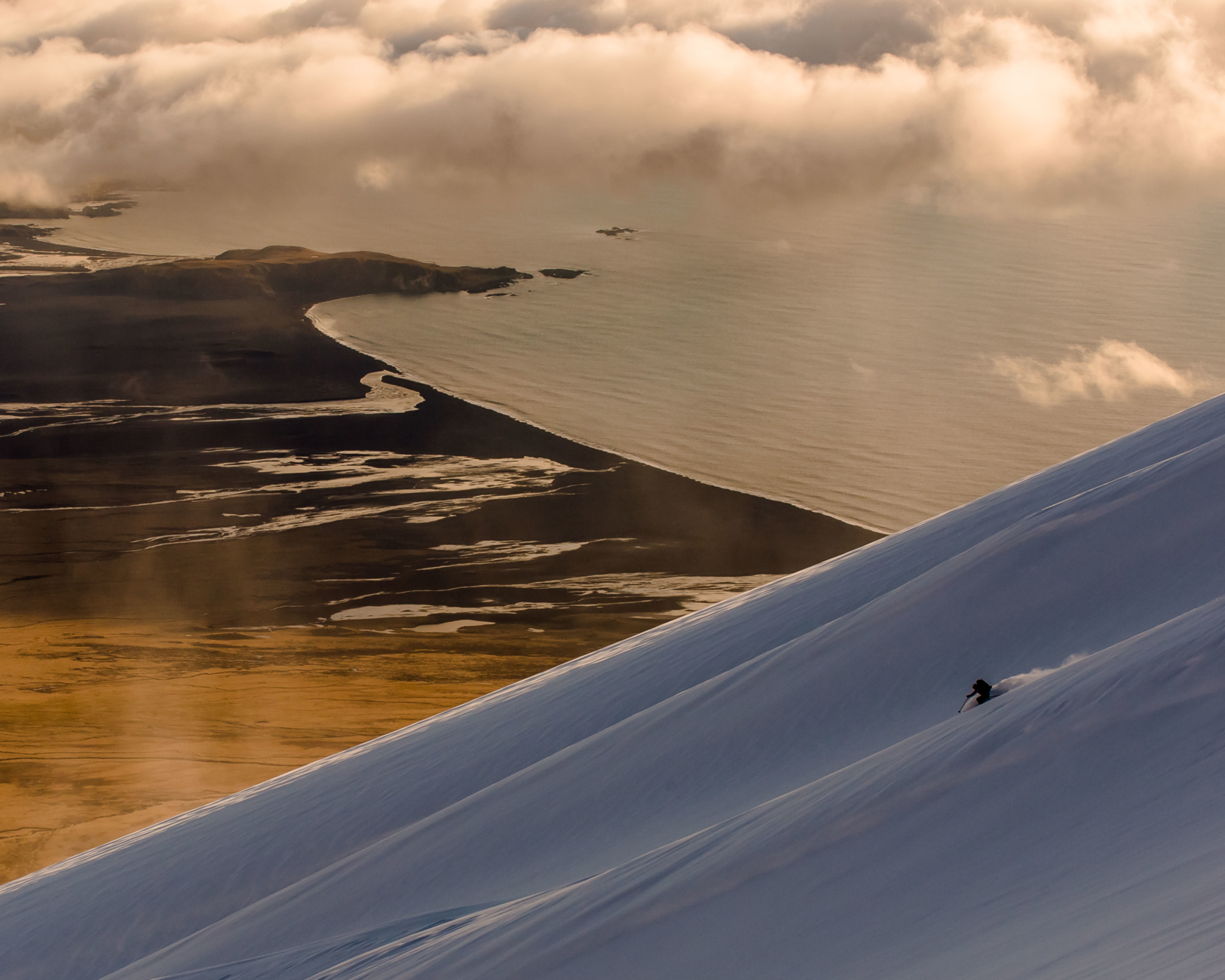 Alex Taran on Vsevidof with the Bering Sea lapping against the coastline.

As the sun lowers in the sky, the winds mellow and clouds part. We slow down, take our time, and enjoy each moment and vantage point. It’s not lost on us that this may be one of few days in a year where this calm perfection graces the snowy southern face of Vsevidof.
Two days later, we’ve stretched, waited out the rain, reset, realigned, and now point our objectives to an older volcanic massif named Recheshnoi. It’s a broad mountain that would look evil if the snow hadn't covered it. The volcano that went extinct long ago, glaciers moved in to chew away at the sides, leaving the shards of harder rock poking about like thorns and thistles. 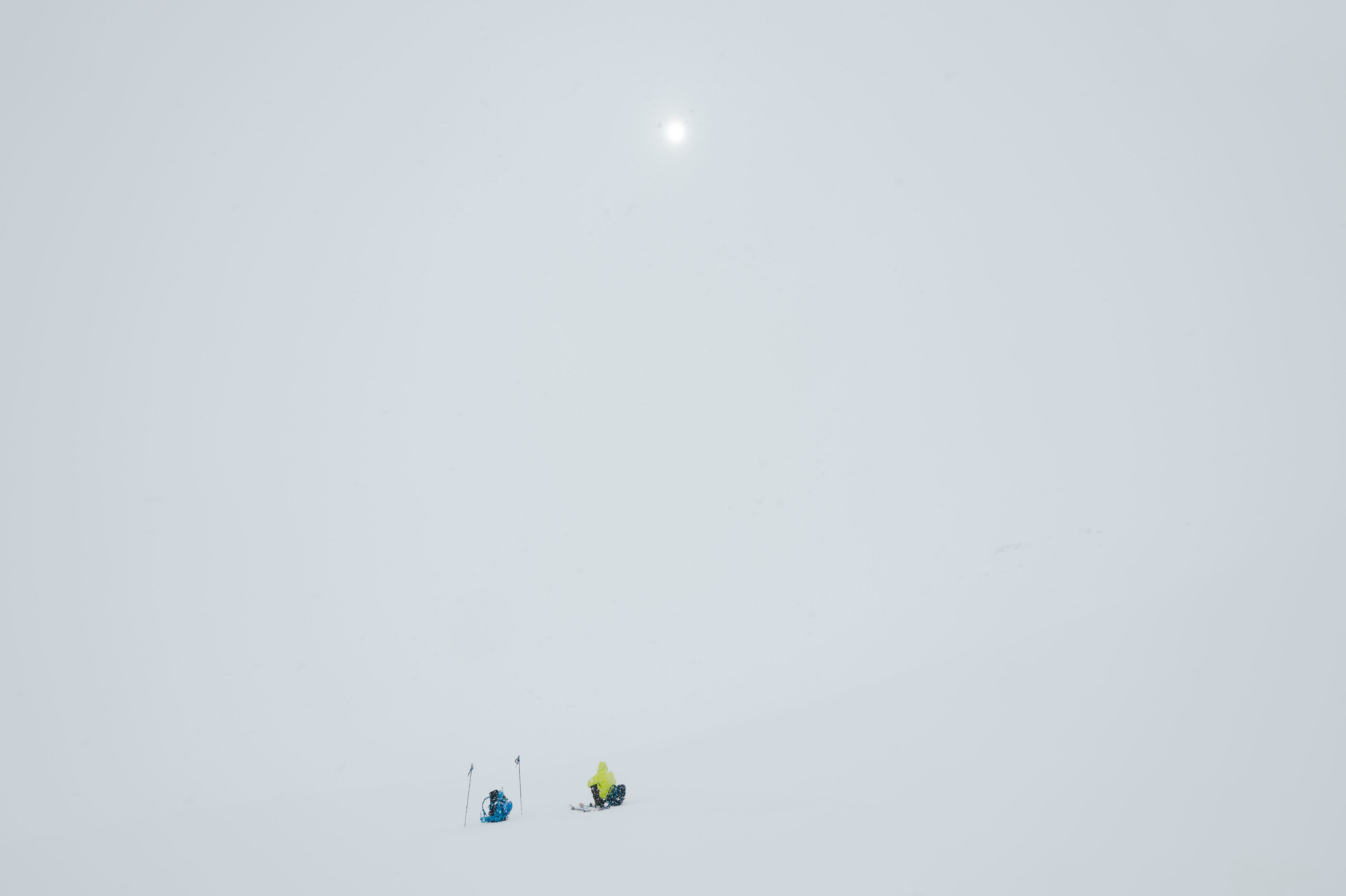 What ya looking for, Tobin?

Four whiteouts hinder our forward movements until, in the late afternoon, we are less than a quarter of the way towards places we thought might be fun to ski. Having struck lucky two days ago, we don’t feel a second risky bet is necessary. We return to the cabin and spend another day listening to winds beating the structure and testing its fortitude. 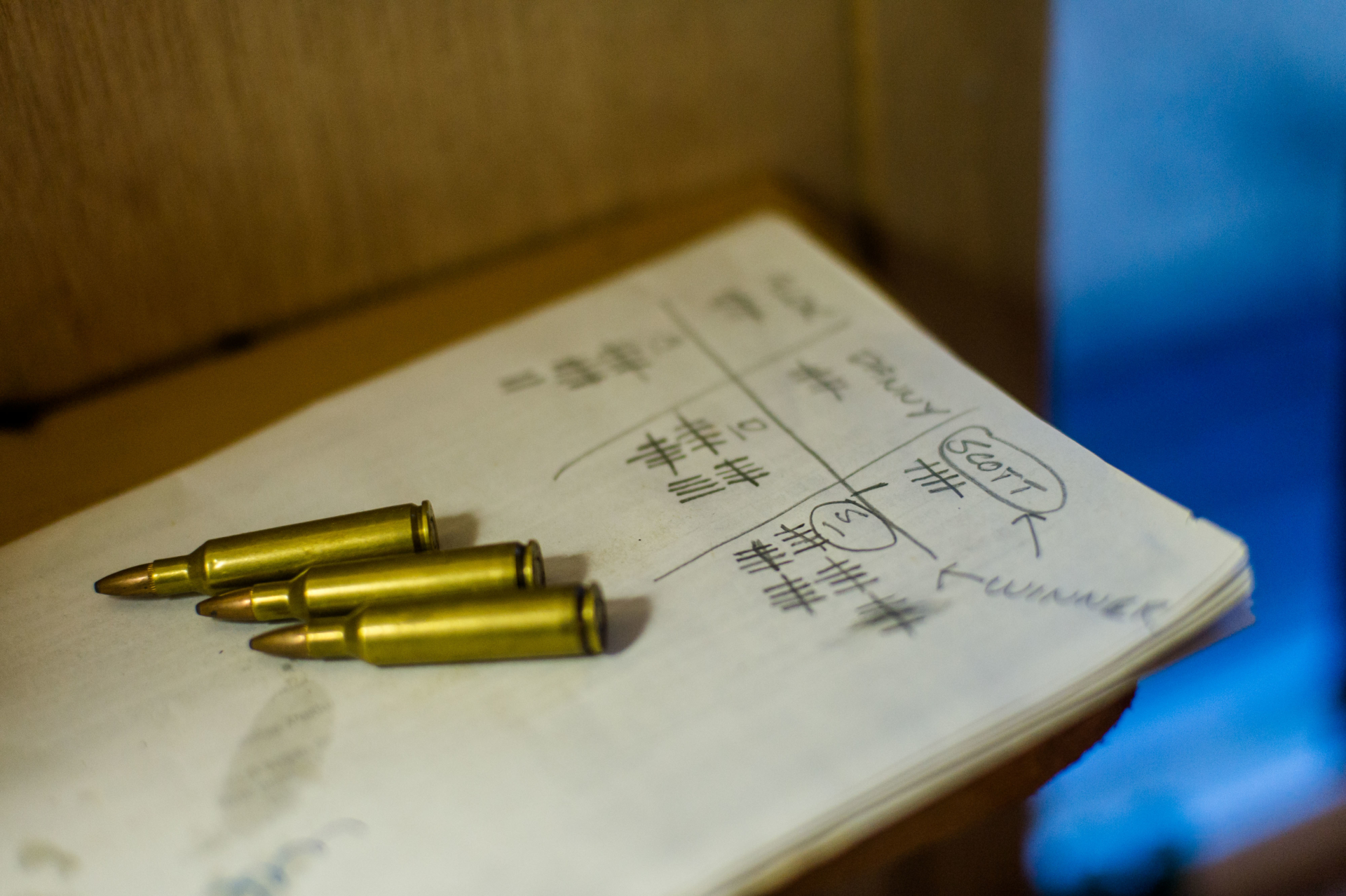 The third day of clear weather lands on our laps. We aim back at Vsevidof and climb to the caldera rim with little resistance. The snow has returned to its hardened forms, with crosshatched snow shapes that recount remarkably contrasting weather across the snow in the last week. We traverse the caldera rim glacier and trace out routes and lines that would provide great descents if given the time and conditions to stick around. 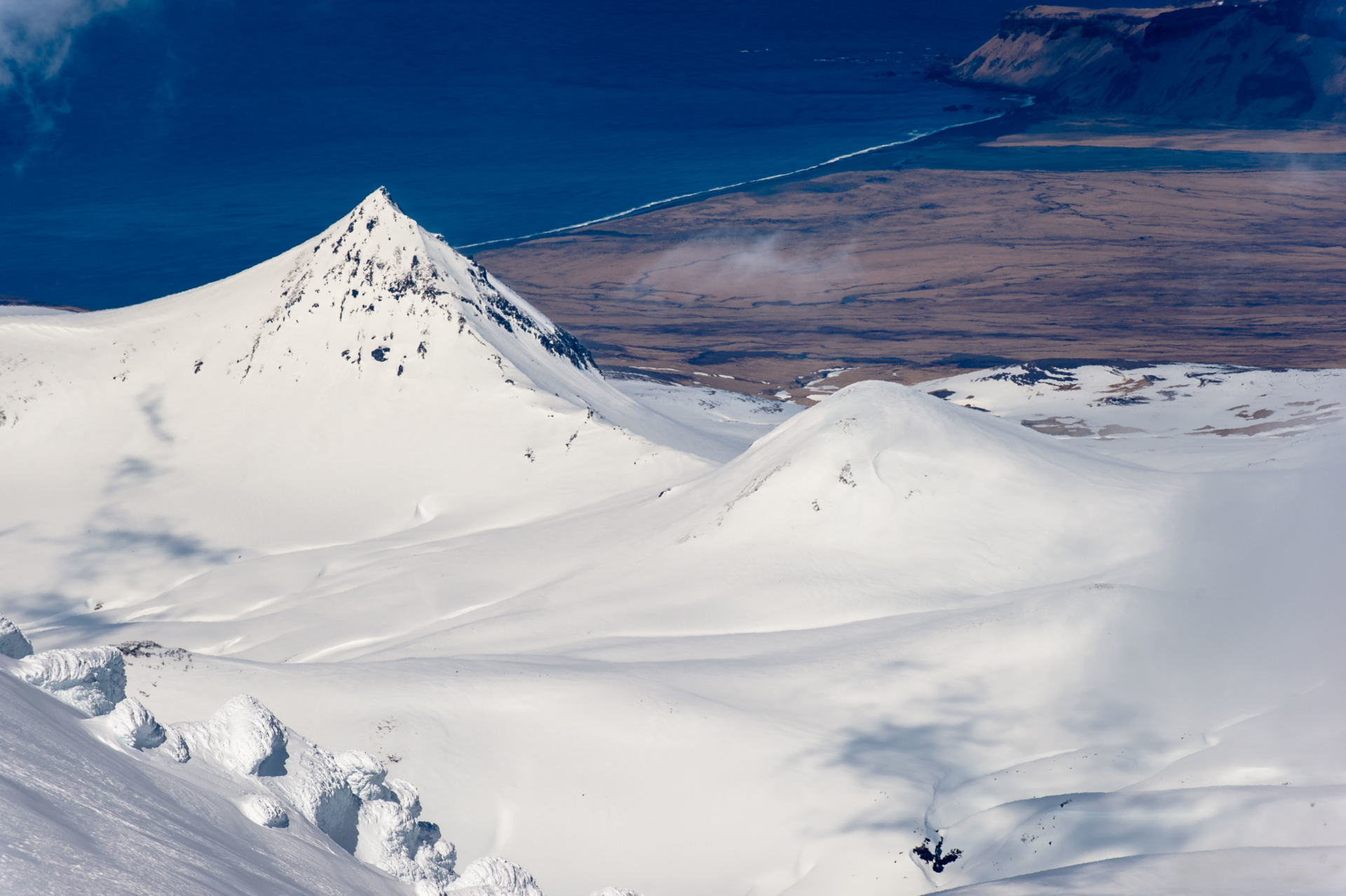 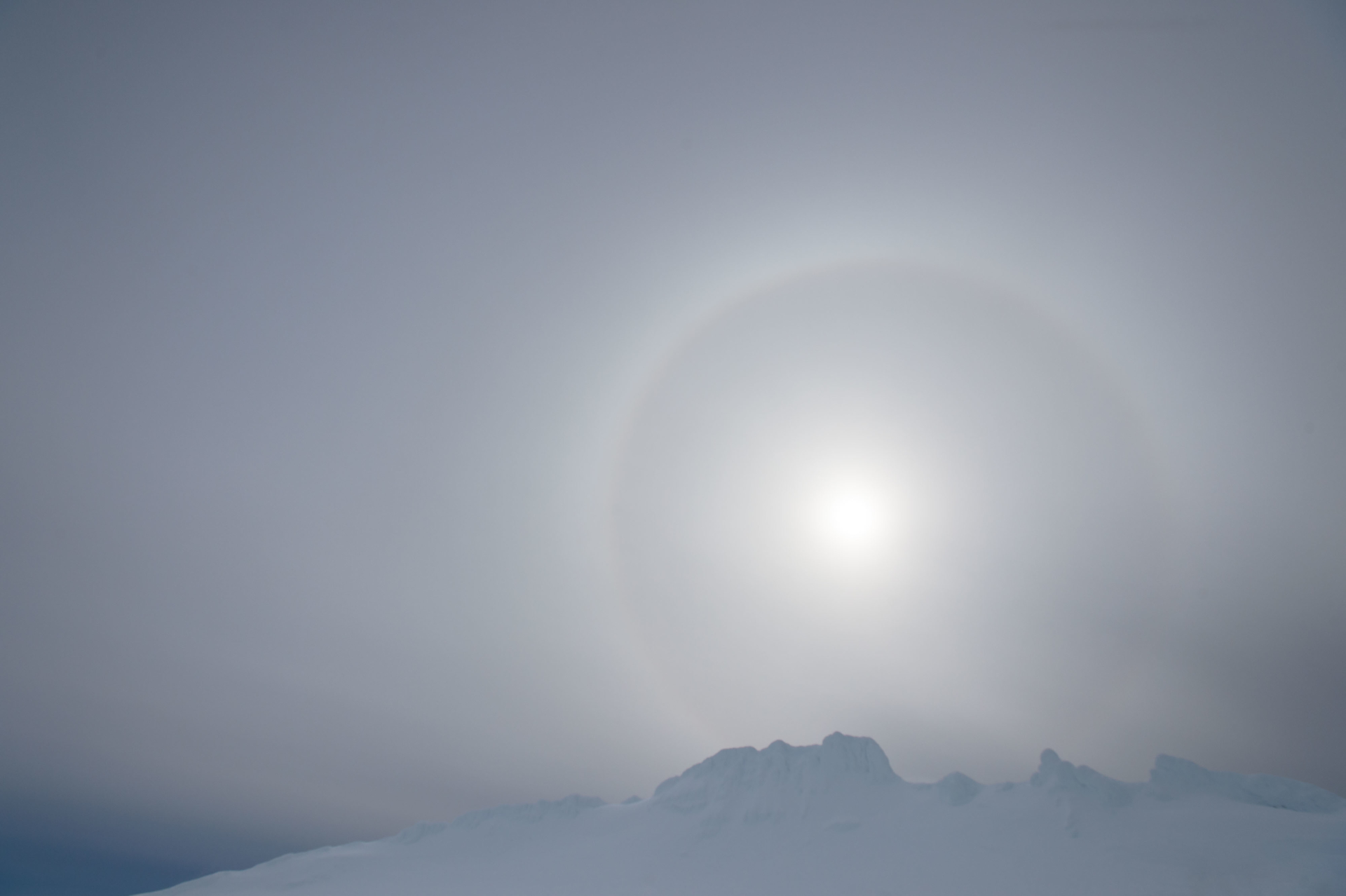 Read the writing on the wall, a sundog atop Vsevidof

I receive a satellite text warning of a changing weather forecast, and when we look skyward, a high elevation haze has moved in and created a circular rainbow wrapping around the sun. A sundog. It means that the potential weather change is here and now. The Aleutians are called the Cradle of the Storm, and we’re standing 2 kilometres above sea level with the wrath of them breathing down our neck. 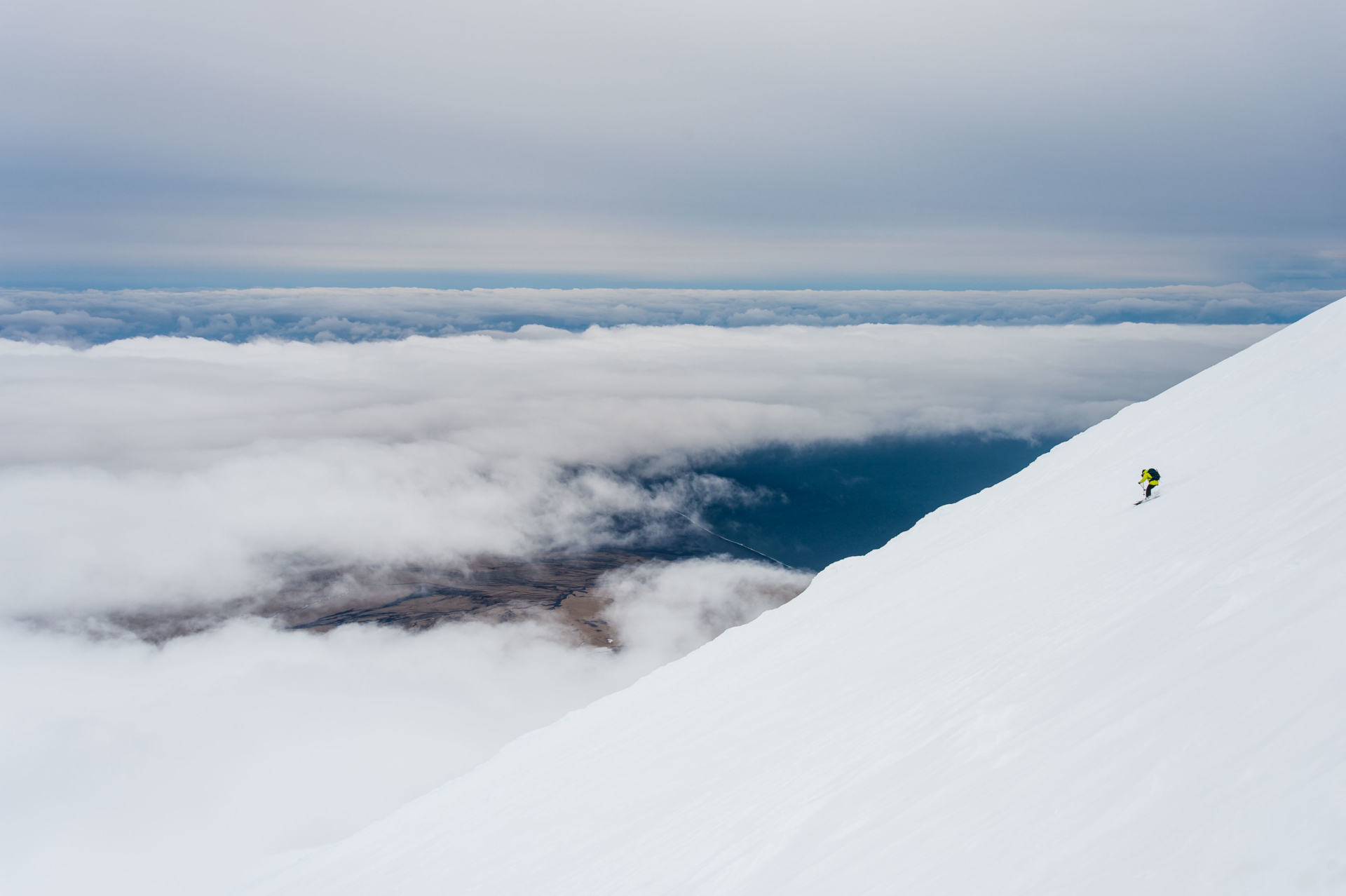 We race back across the flat caldera rim. By the time we are three turns into the descent, we are enveloped in cloud. If we ski any more than four turns away from each other, we disappear into the gathering mist. We left pins in our navigation apps to Hansel and Gretel our way home if need be. Now, we ski blindly down the mountain staring at a little pin on a screen, trusting that if we chatter down the crusty snow long enough, it will lead us out of the storm before the storm eats us. 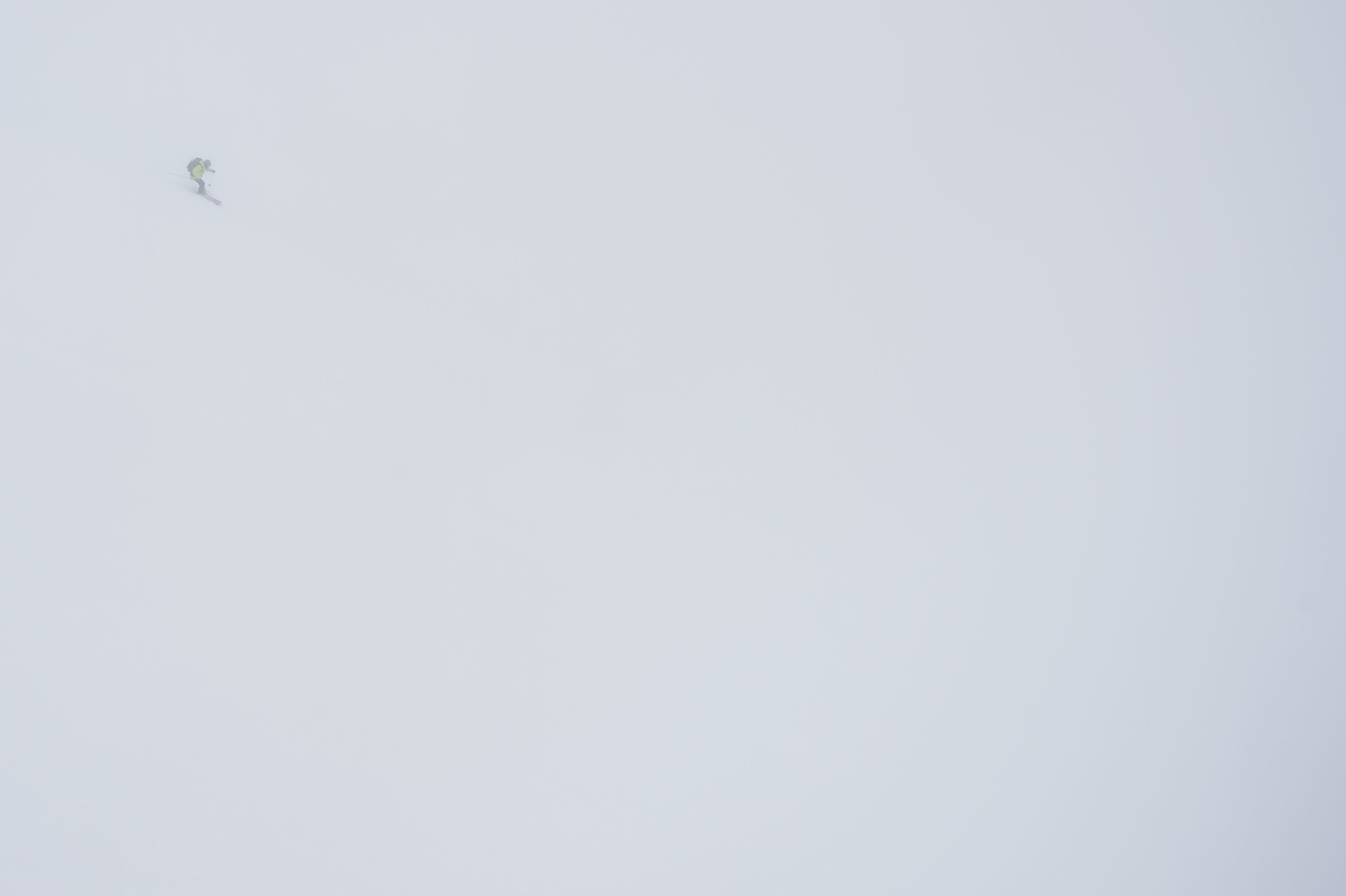 Look at those views!

Snow turns to rain at the ATVs, and we race against the water cycle to cross the stream before the water rises. An hour later, the wind slaps the door closed behind us as if the storm resents our intrusive quests. We hide from the wrath of mother nature in our shoebox cabin by the sea, in the Cradle of the Storms.