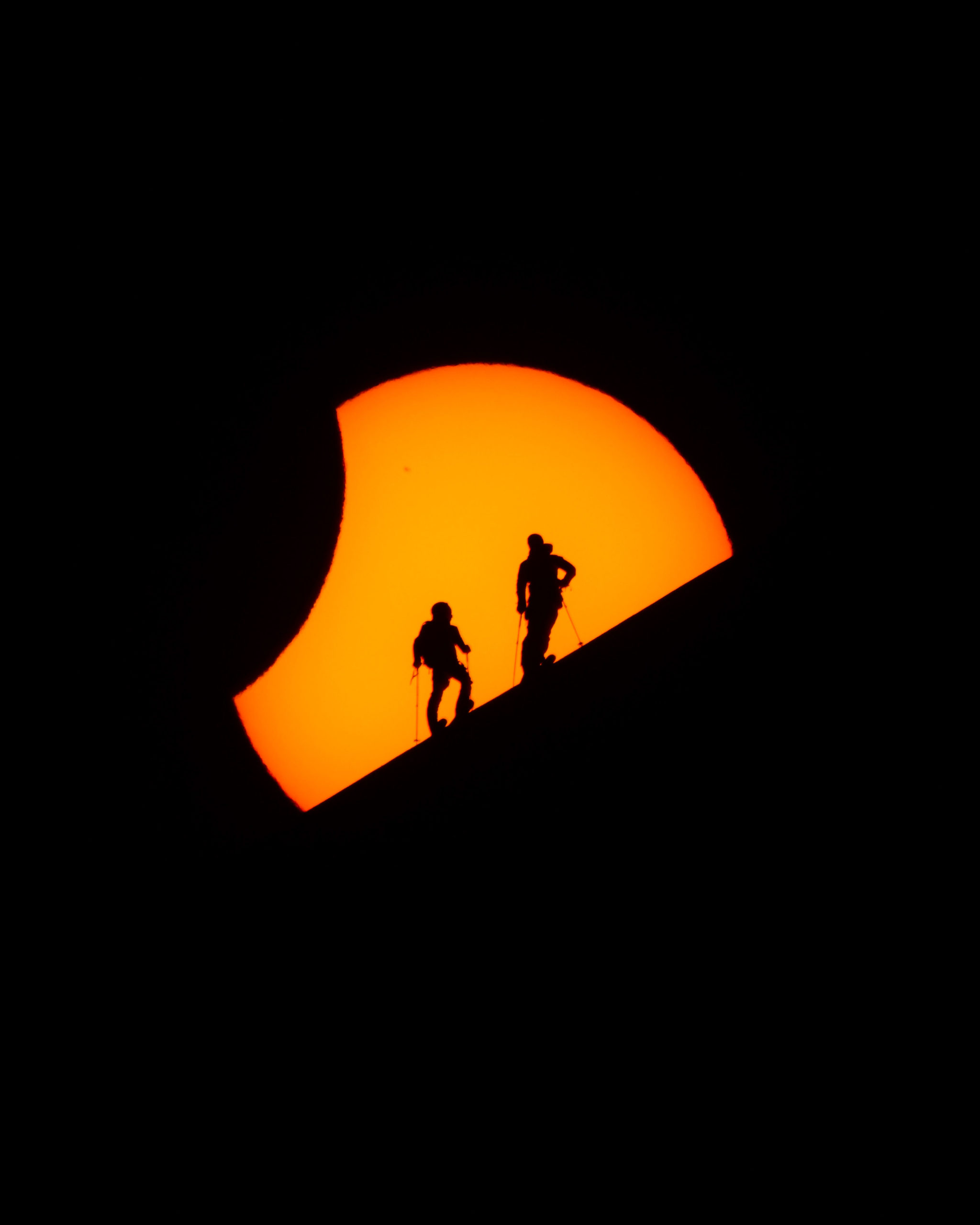 In retrospect, the idea of skiing during a solar eclipse near the north pole seems now to be a good one. Since we didn’t lose fingers to frostbite or polar bear nip, weather, snow, and celestial movement conspired for the most surreal and beautiful show a person could see.

But, during the envisioning and planning phase, the idea was truly asinine. In March, the sun is only just returning to the arctic after the winter's permanent night. Even then, it's hidden by clouds most of the time. Temperatures can drop past the bottom of a thermometer at a moment’s notice, camera batteries freeze, frozen plastic breaks, and any injury can escalate to limb or life-threatening within hours. 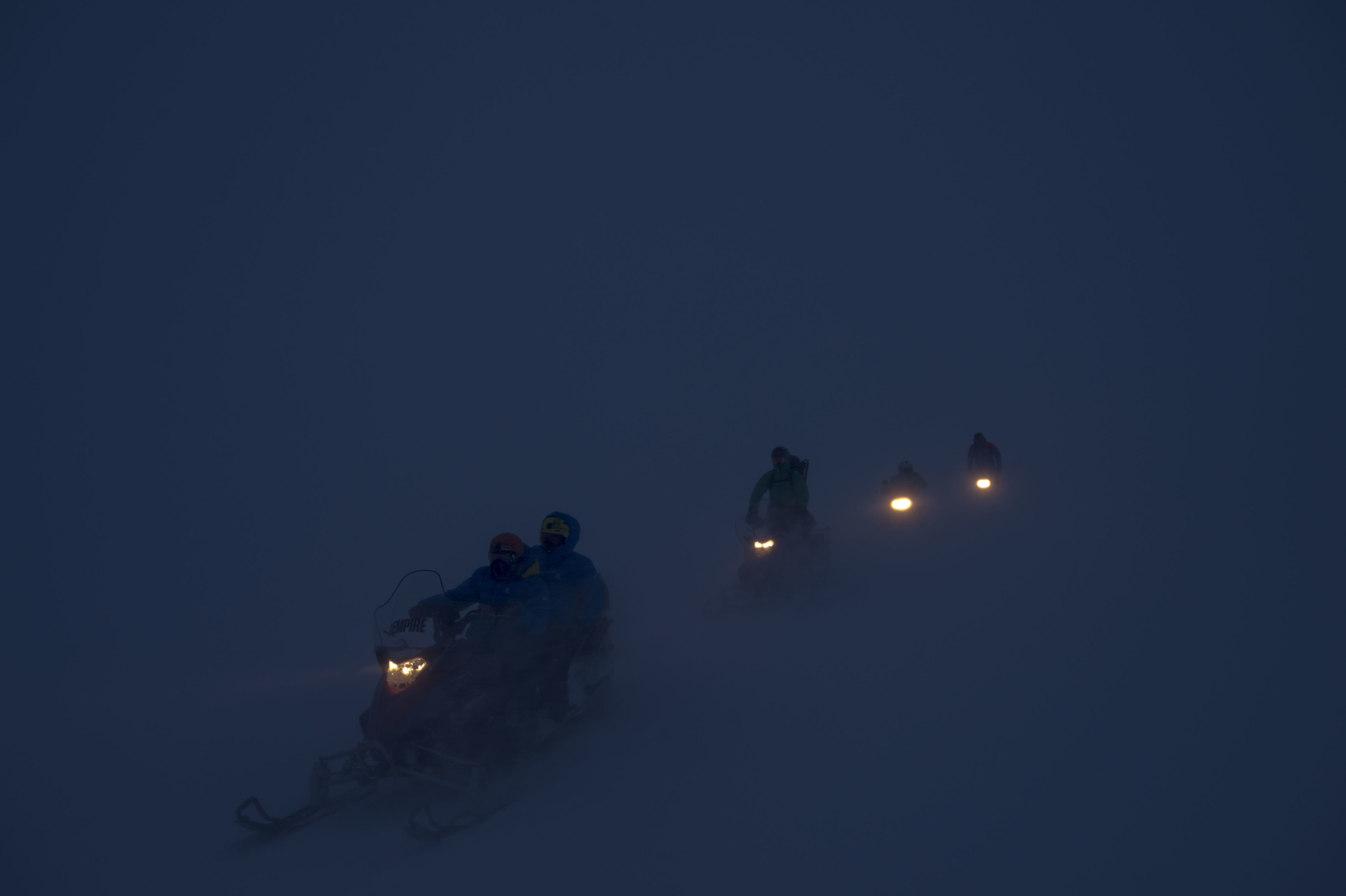 The tricky thing about ideas — good or bad — is that they share many qualities; risks, uncertainty, a motivating force, and a goal. Adventure with unlimited possibilities for failure holds the potential of being the trip of a lifetime.

With a group of ten; skiers, guides, filmmakers, assistants, and myself, we planned to spend 3 weeks on the far north archipelago of Svalbard, a Norwegian territory. From Oslo you fly three hours north. If the flight continued for two more hours, you'd be directly above the north pole. With that frigid reality in mind, our guide wanted to test us, before taking us deep into the mountains for weeks. 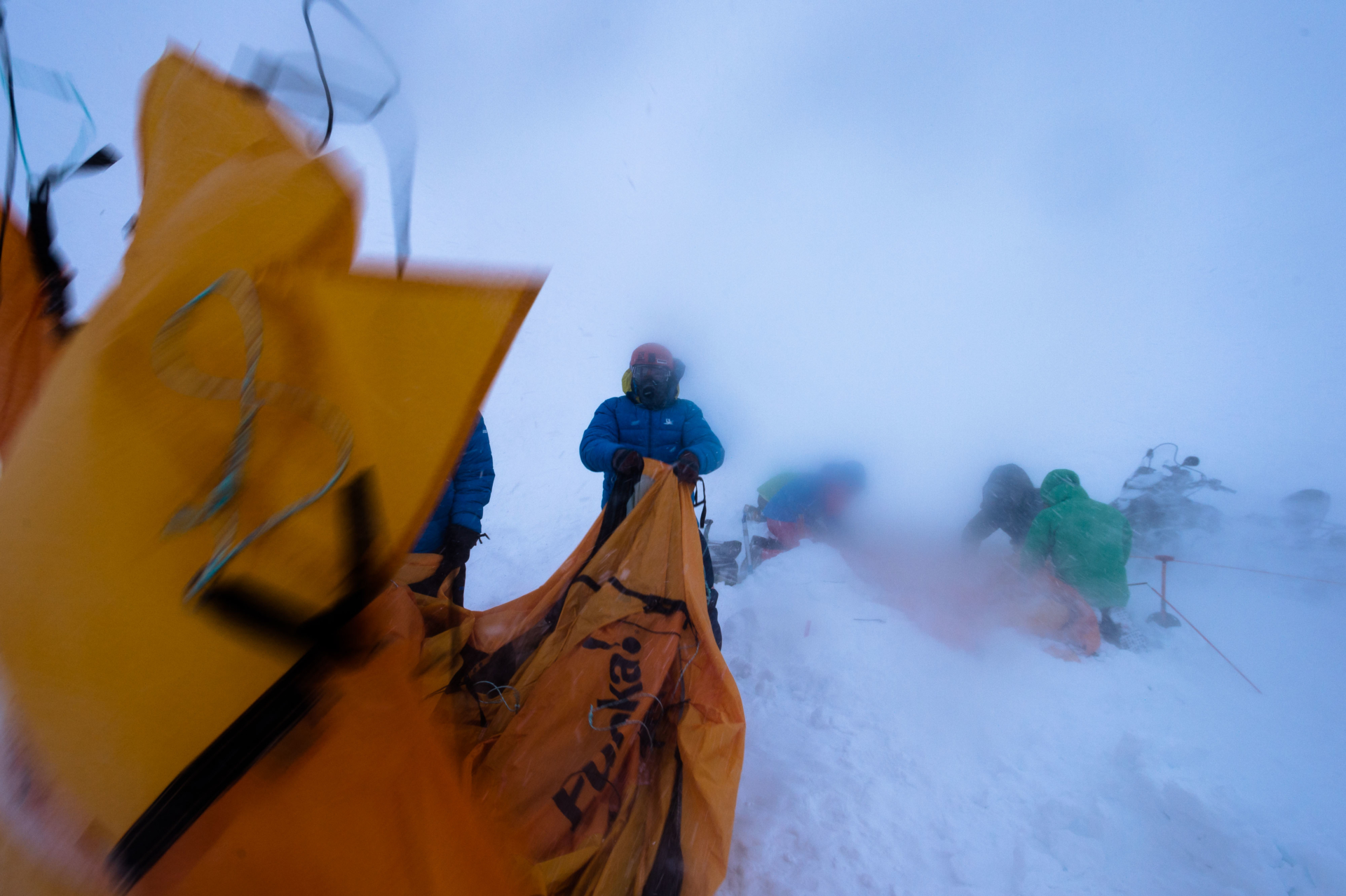 Chris Rubens takes a moment to wonder what exactly we are achieving.

He took us directly into the centre of a Svalbardian storm, navigating the frozen landscape on a snowmobile, setting and collapsing tents during a gale. Coming face to face with the fact that independent of your confidence, a hostile environment like that is a world of booby traps. Toughness isn't a thing here. Muscle, hubris, and a bold self-image aren’t very useful. Only teamwork, dedication, and understanding of your vulnerability and inadequacy can keep you safe. Most of all, don’t pick fights you won’t win.

The day begins like any other during a solar eclipse seen from the ground; the sun rises as expected and goes to bed at its usual time. But for two hours, when the moon passes in front of the sun, turning day into night. It begins subtly; the sun's slight dimming as the moon eats away at its surface. You’d likely be oblivious to the first thirty minutes without specialized glasses. Then, as more and more rays are blocked, a strange darkened daylight permeates the landscape. Some primal feelings of uncertainty and unease takeover; something is amiss.

For just two minutes, the sun appears to be turned inside out. Nothing in your lived experience can communicate with the flood of chaotic feelings; primal fear, beauty, awe, stars seen in daylight, and humans howling at the sky like a pack of wolves. 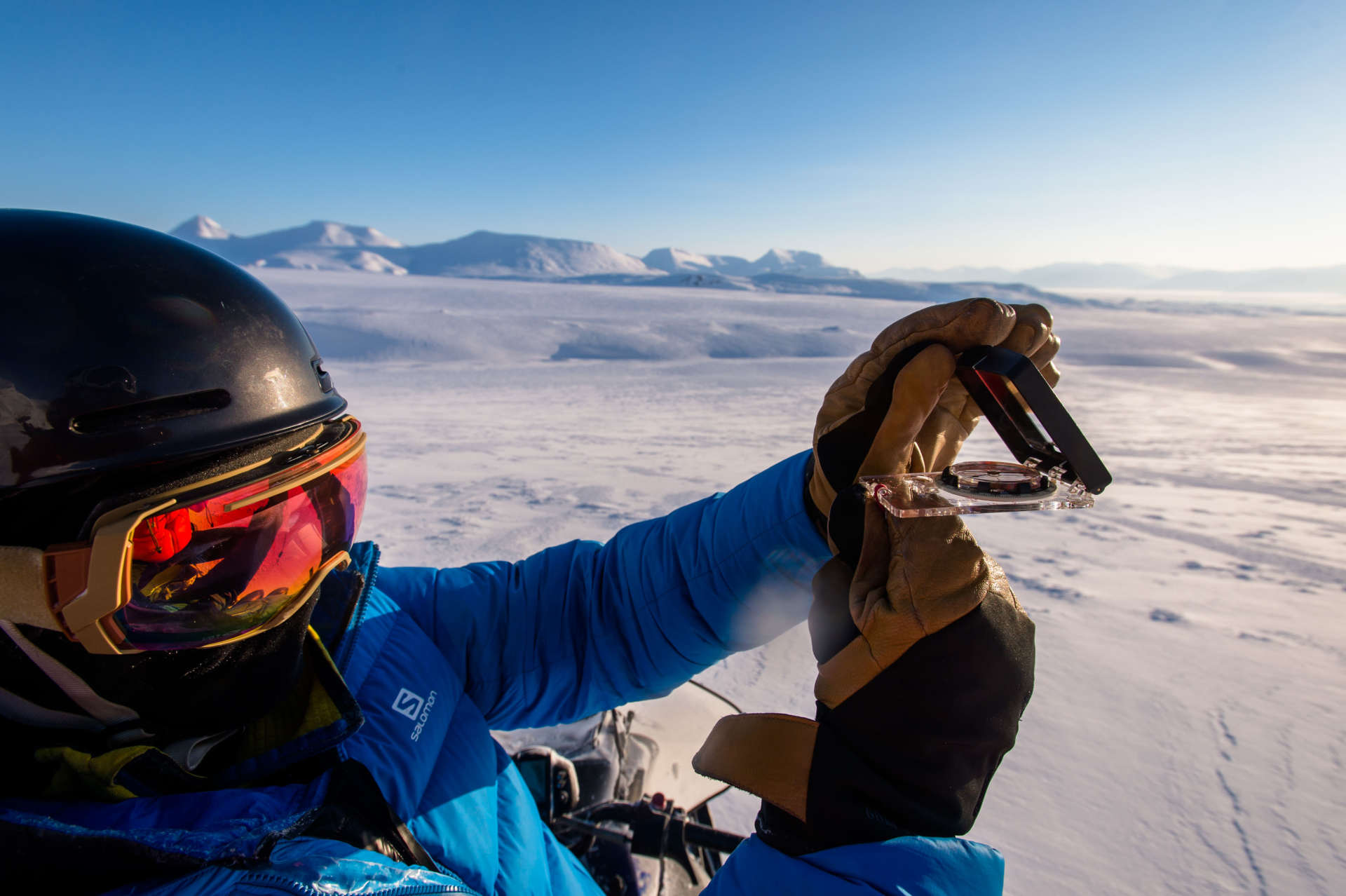 At that moment, if the sky is clear, and if our crew is lucky to find snow, we can pull the impossible — a surreal image out of the reality that can only be captured once or twice in a lifespan. We’ll have to restrain our innate chaos to ski and shoot perfectly.

A hazy shadow with a black dot at its centre tracks across the earth during a solar eclipse seen from space. The shadow draws a curved line across the globe. The line, only a couple of kilometres wide, is the only place you can see the entire show. On NASA's maps of future solar eclipses, only two lines track across winter snow during my lifetime. So I can know with certainty that on March 20, 2015, at 10:11, I will, or won’t, shoot a life-defining photograph. 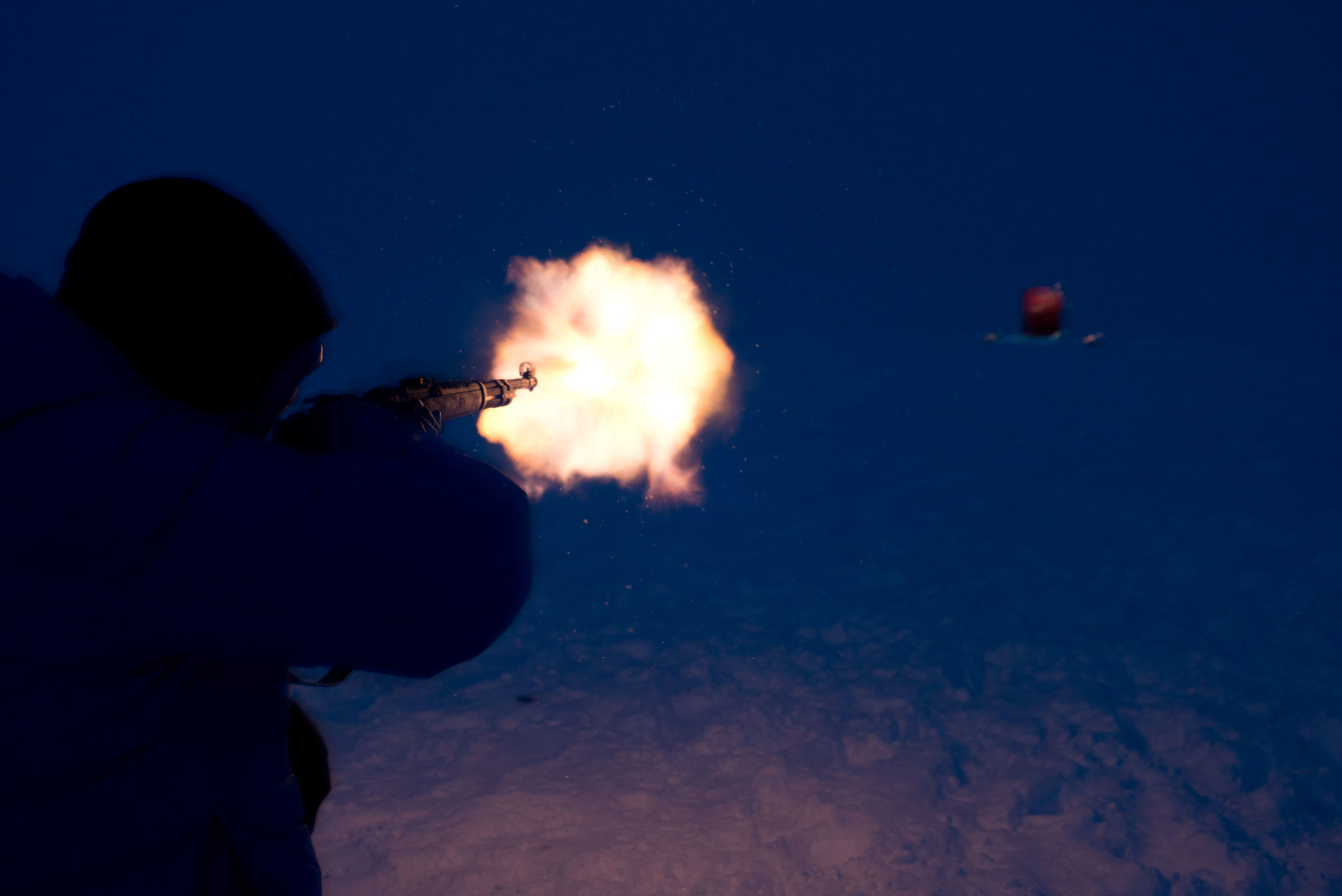 Cody Townsend practices his marksmanship in case we are forced to defend ourselves from an agitated polar bear. 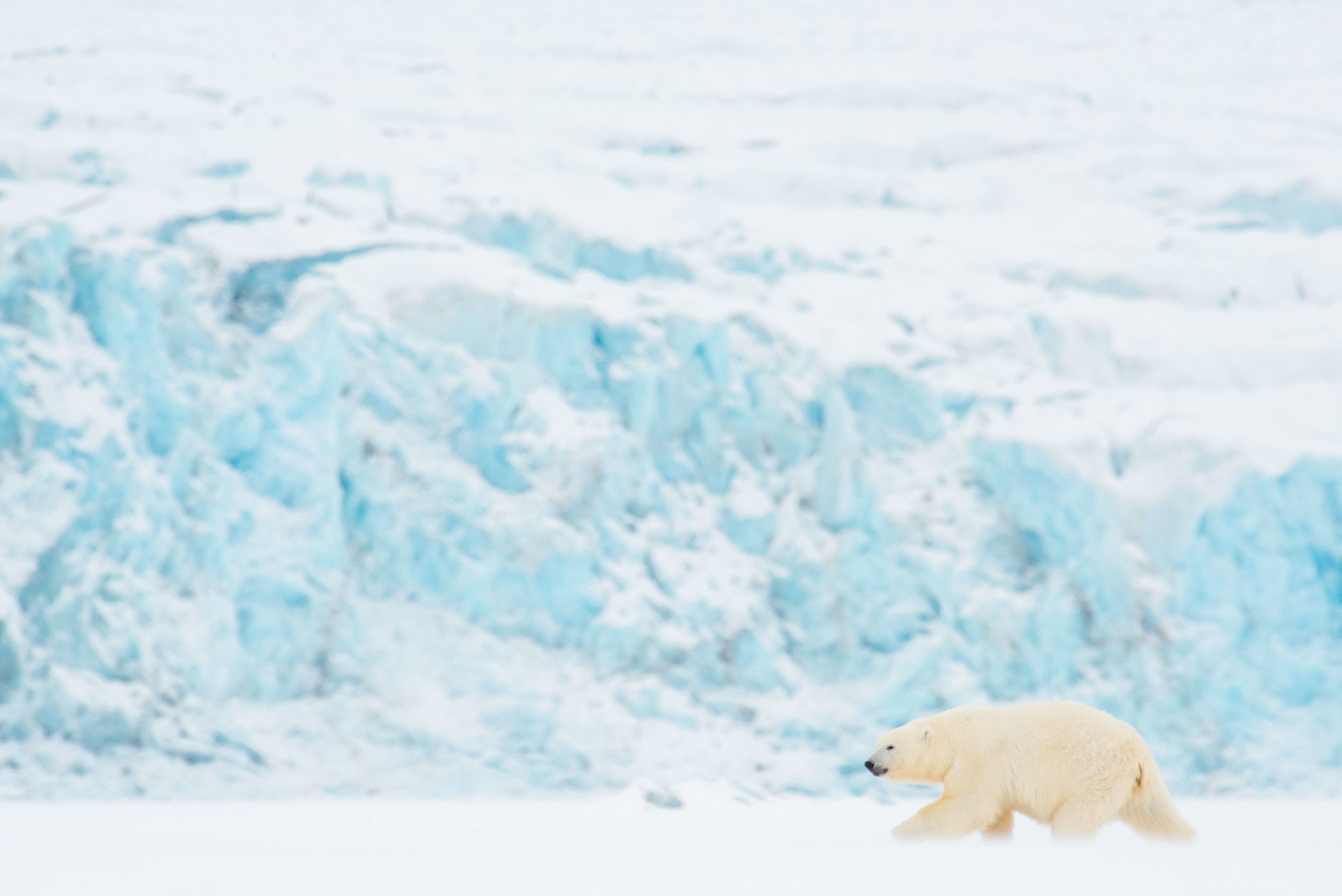 The solution to poor weather, tricky snow, and new terrain was to choose a decent amount of time to ski and scout the mountains for the best ridge-line on which to set our bet.

The sun returns to the northern latitudes after winter night. It follows a low track across the sky, getting no higher than three stacked fists at extended arm's length. We moved through a sublime landscape coated in beautiful angled light every day. We travelled to a Russian town with a closed coal mine, inhabited by a couple of remaining locals paid by the Russian government to maintain an occupied presence on this ruthlessly inhospitable landmass. We travelled across frozen ocean bays to find and watch a polar bear stand on her hind legs and drop a massive weight onto her front paws to break the ice while hunting seals. 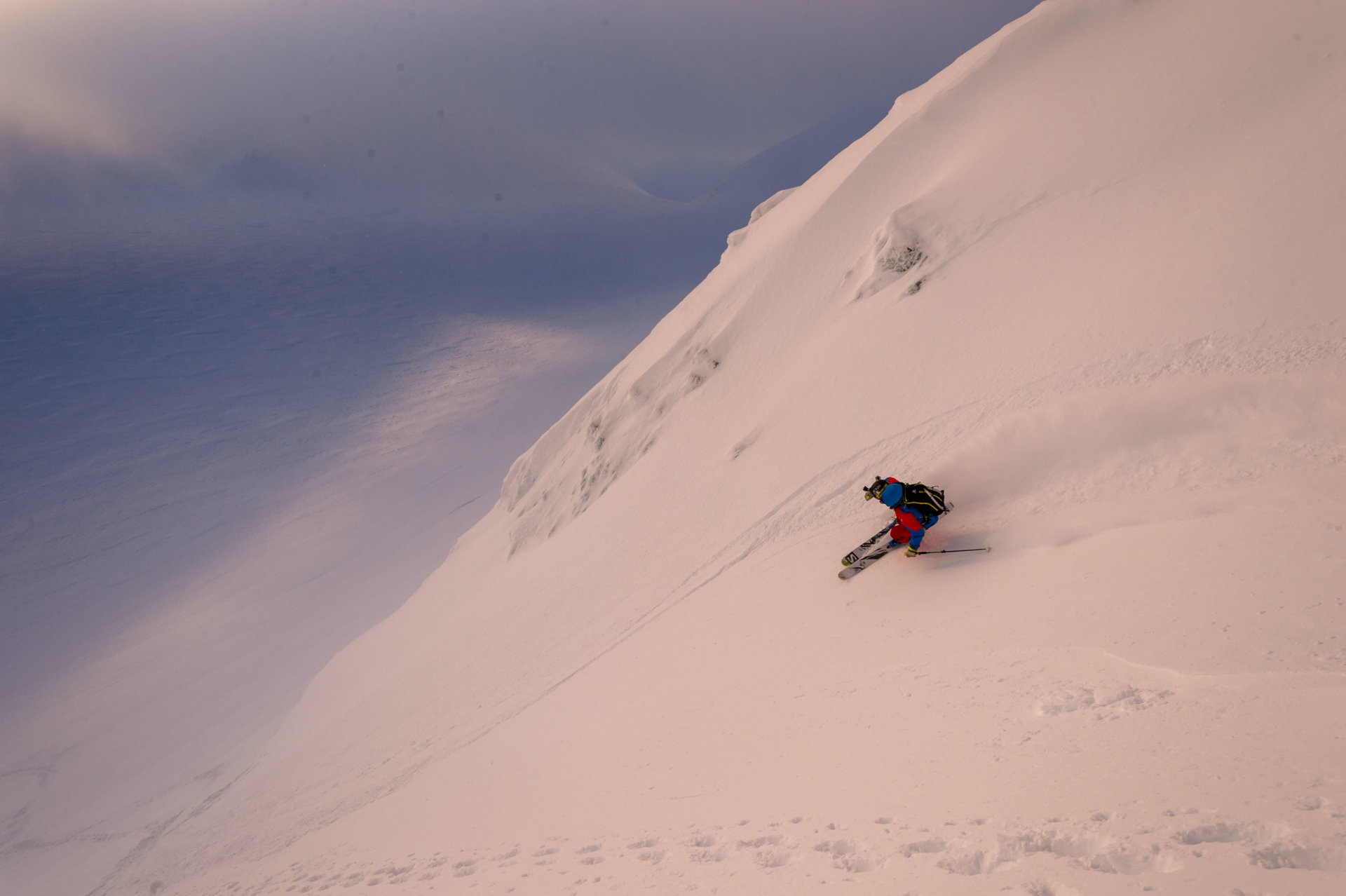 The mountains of Svalbard hold snow of a sort — a strange pressed styrofoam type of frozen water that limited how and where you could move. If we wanted to portray the celestial event with our telephoto lenses, we needed snow on the edge of a mountain. But the trouble with the snow was that it enjoyed sitting in chutes and bowls and was rarely found on the ridge.

Finding a skiable ridgeline was the only way we would do it. 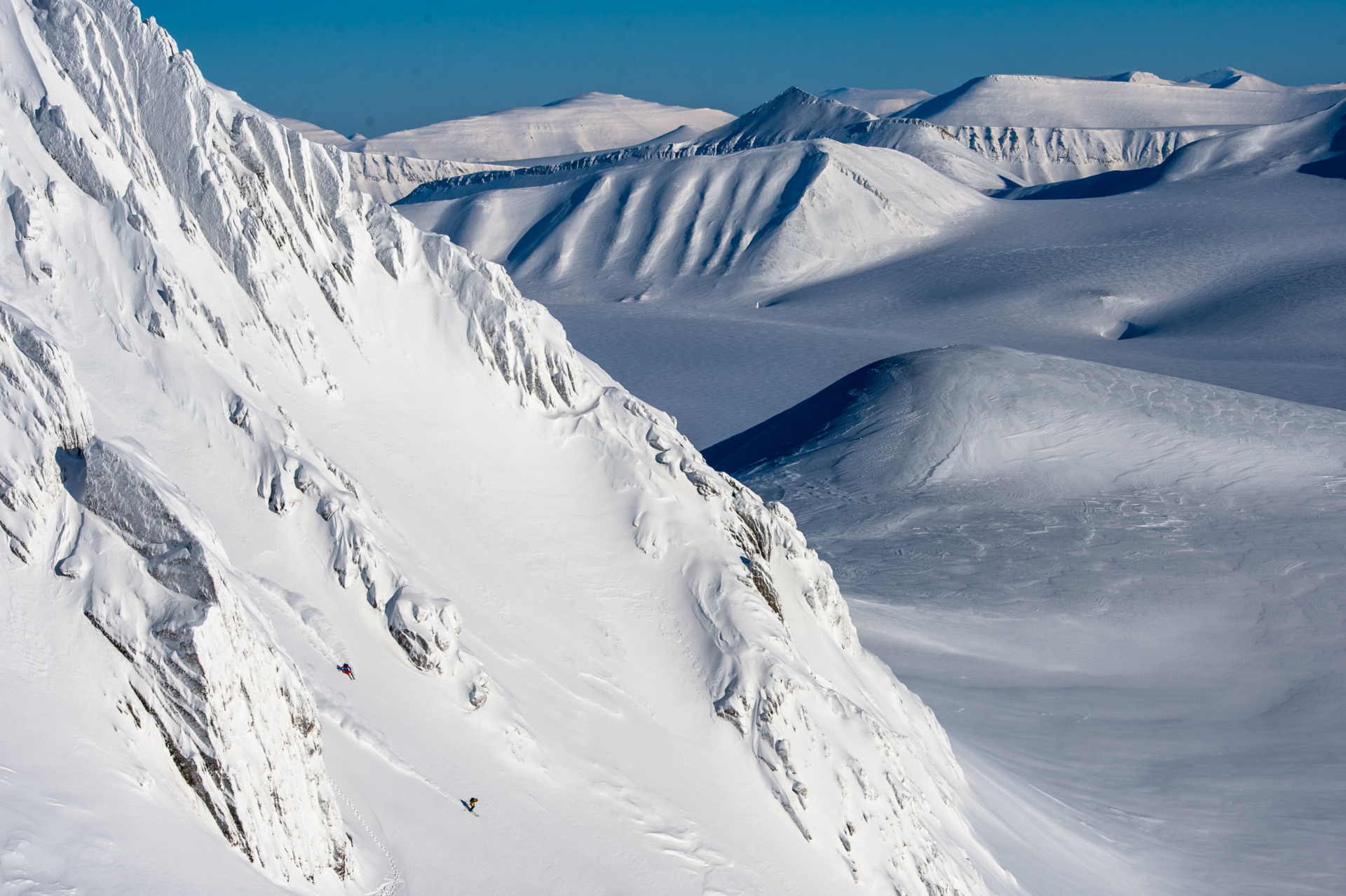 Come the morning of March 20, we still had not put a skier on a ridgeline with skiable snow, causing stress amongst the crew. But the weather was in our favour with clear skies. After checking gear and radios, the skiers went up a ridgeline that may work. It had a wind wave that seemed to have the correct orientation to set the sun, moon, earth, skier, and cameras along a straight line.

We could walk across the glacier surface and align the skiers with the sun from the ground. The athletes had no way of knowing what our alignment looked like, and their concentration was on the -20°C winds they were experiencing. The wind, a malicious collaborator, had created the cornice-type wind wave that deposited the rare ridgeline snow. But it also threatened the same opportunity it made available — no one here will lose a finger over a photograph.

As a hole was torn open in the sun, and screams of joy, elation, and mind-melting views filled the valley, my shutter clicked away. 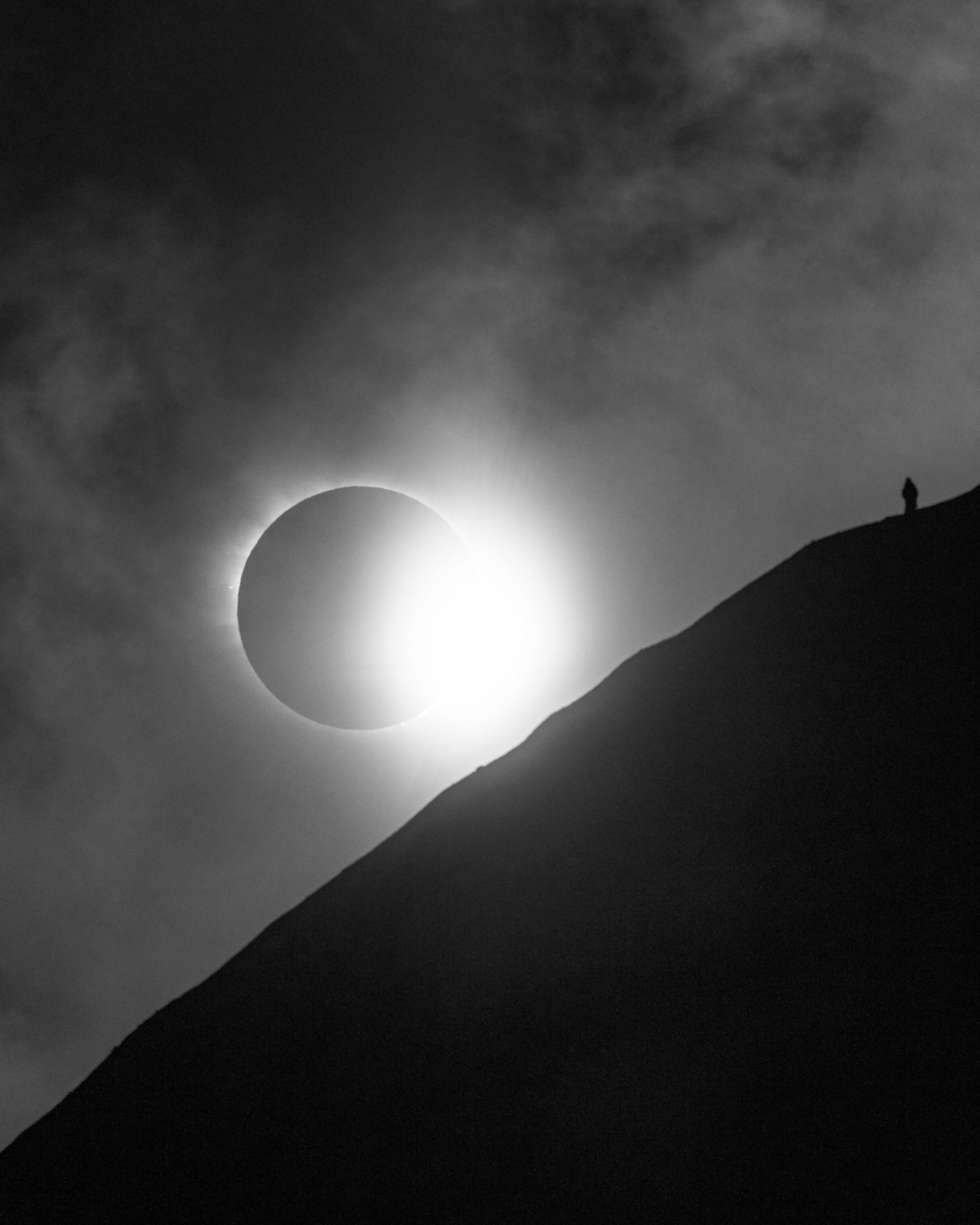 Against the odds, we watched the sun disappear.

The mirror in my camera was flipping back and forth, alternately showing my eye the scene between shots and unveiling the sensor to record photographs.

The moments I witnessed were unforgettable. The moments I didn't see solidified that the idea of skiing under a solar eclipse was good, bad, and risky, but altogether a trip of a lifetime. 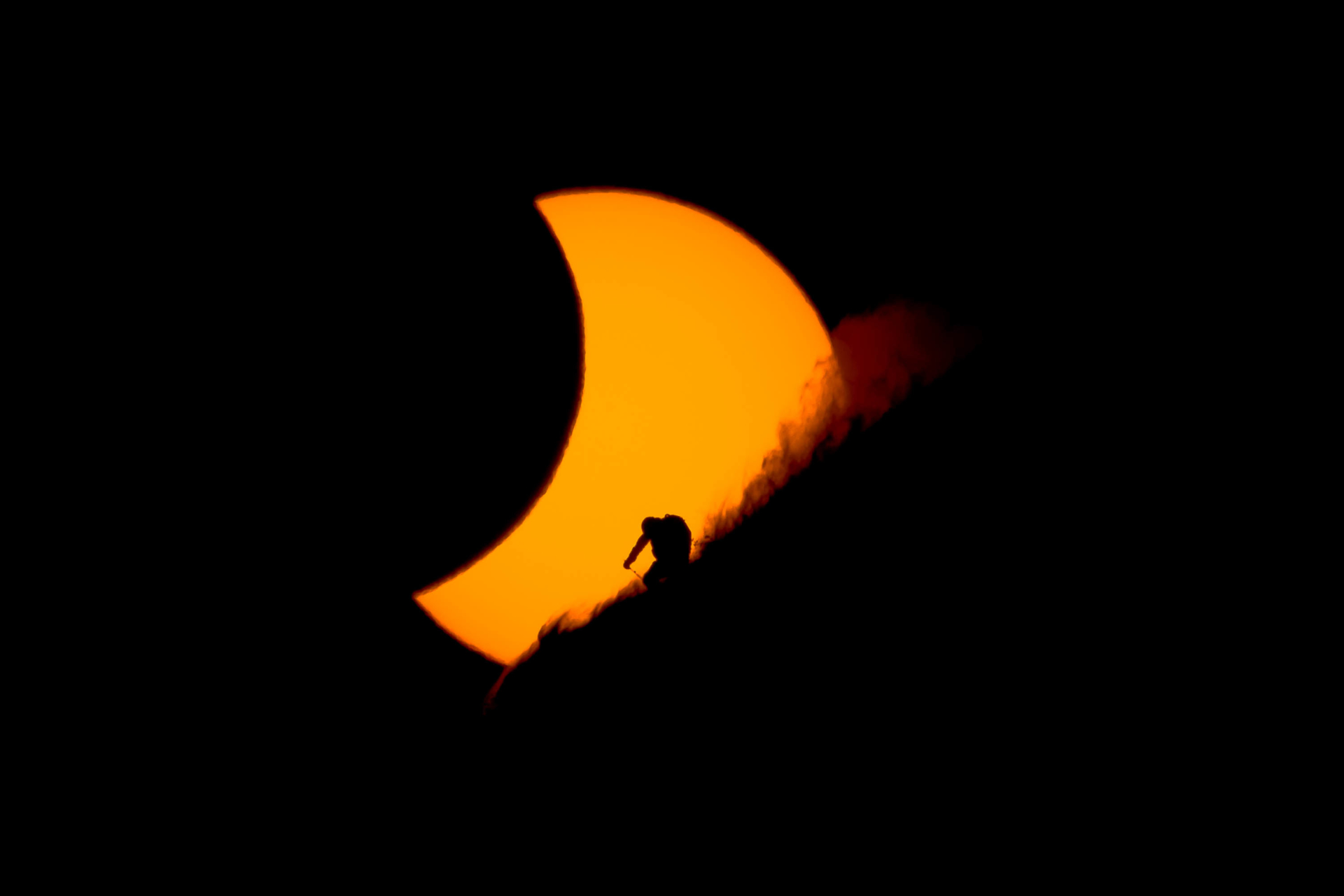 Chris Rubens, Cody Townsend, or Brody Leven; we truly don't know who made the final shot. 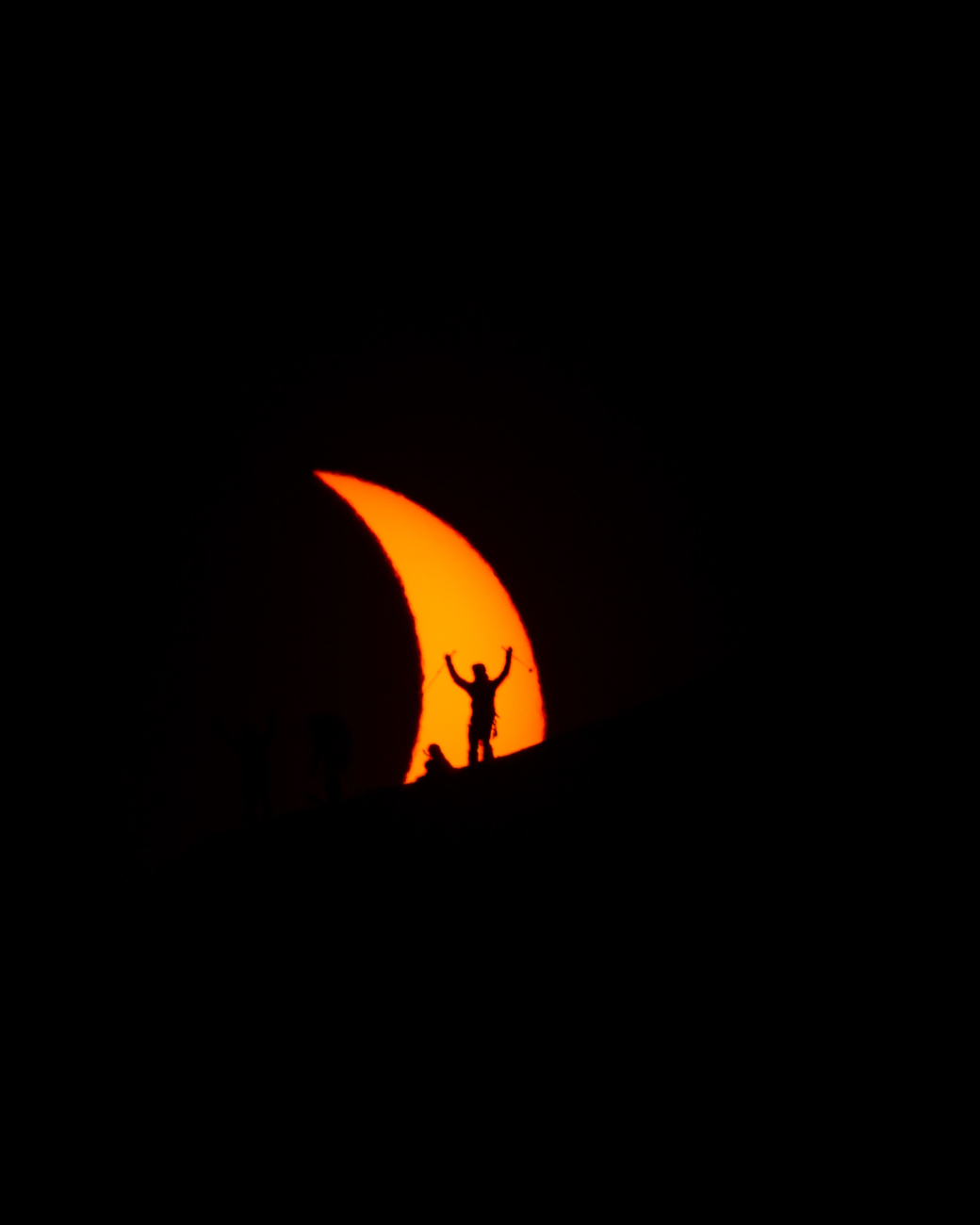