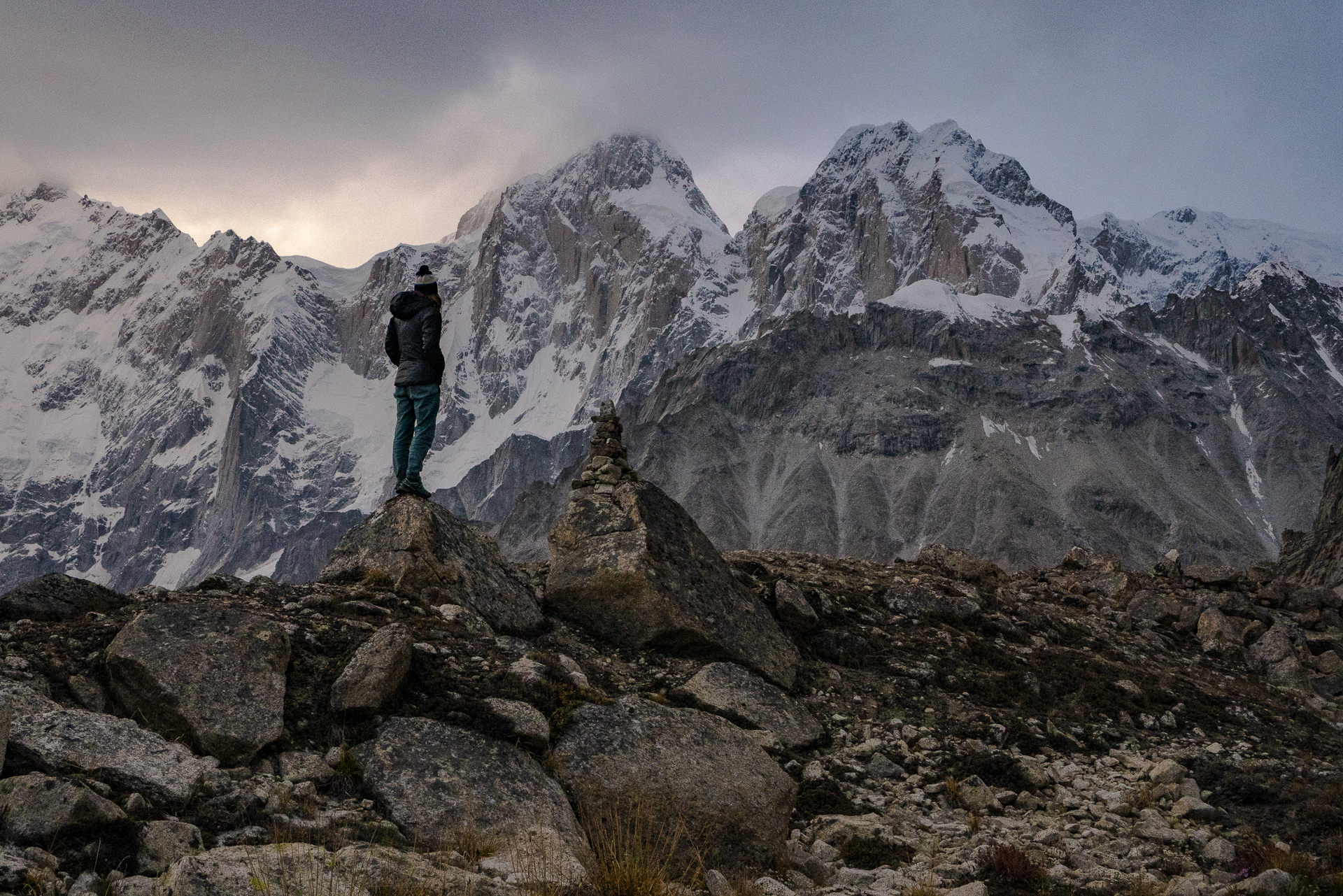 It was 3 a. m., and I was lying in a three-person sleeping bag with Chantel and Jason’s legs pressing on my hips. The moon and stars illuminated our yellow Simond tent, just enough to make out their heads poking out from the sleeping bag at the other end.

Chantel began to read our weather forecast from inReach®. Her voice sounded tired. Another optimistic weeklong high-pressure system had dwindled into unsettled snow and high winds. Jason unzipped the tent and stuck his head out, noticing a cloud capping the upper part of the mountain. 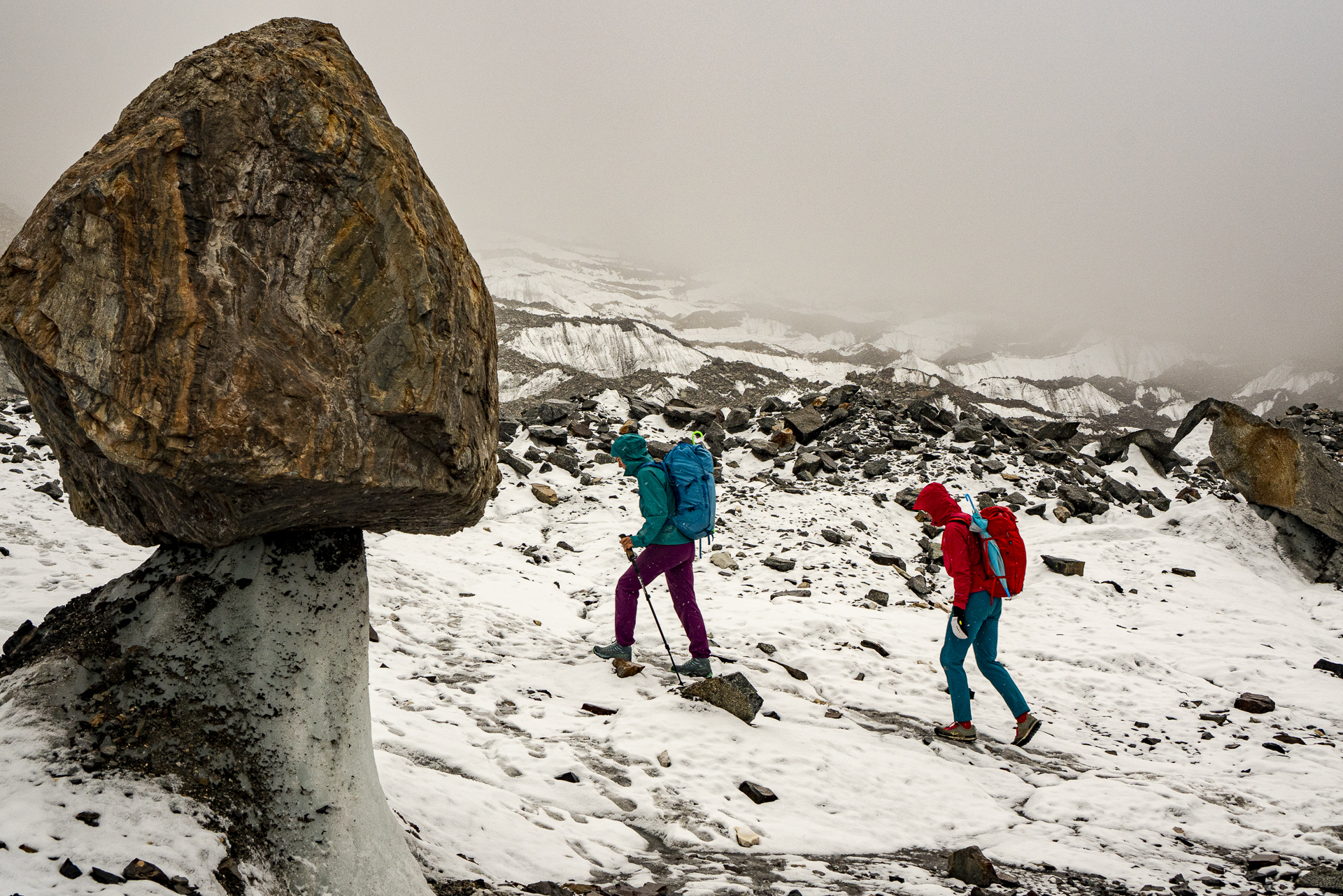 The Yutmaru Glacier, a branch of the Hispar, contains several million years of snow and ice, flowing like a very slow river. The Hispar Glacier itself is part of the longest glacial system outside of the polar regions. On the trek to basecamp, about 4 miles from the base of Pumari Chhish, the cook and porters told stories about how the Hispar Glacier used to reach nearly to the tops of the lateral moraine.

One year earlier, in September 2018, Chantel Astorga, my longtime climbing partner, had sent me and my husband, Jason Thompson, a photo of the Pumari Chhish massif in the Karakoram mountains of Pakistan and asked if we wanted to plan a trip there.

The beautiful ruggedness of Pakistan and its massive snow-covered mountains is on every alpinist's tick list, and for me, it was no different. 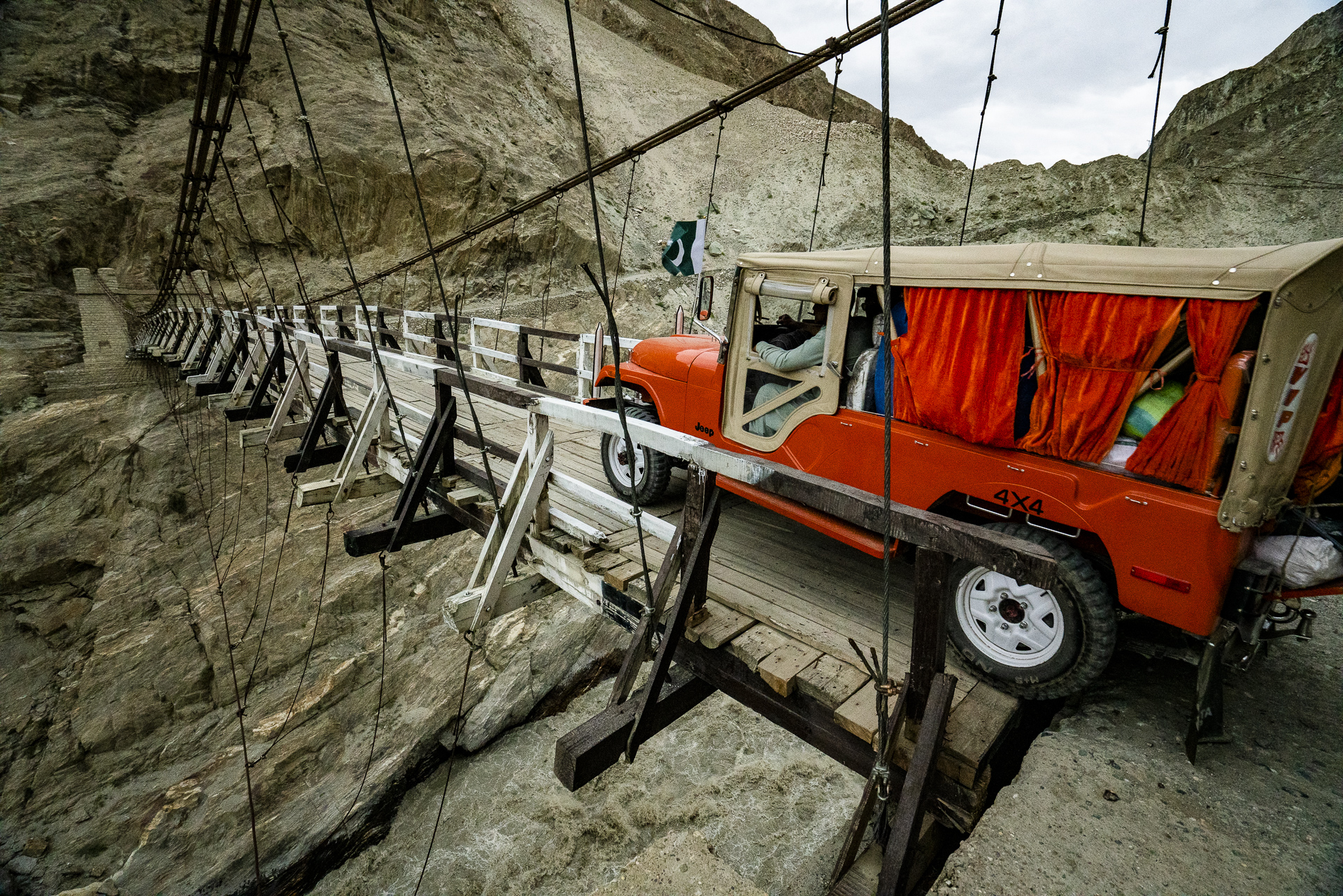 We spent 12 months planning and prepping every detail, getting strong mentally and physically so we’d be ready when a weather window opened. Risk is inherent in alpine climbing. There is so much uncertainty related to the weather, the conditions, and one’s health that is only so much a climber can control. And despite even our best judgment, we’re always rolling the dice when it comes to big unclimbed mountains.

As climbers, we like to think we are in total control and that our decisions are justified. But in reality, the mountains are in control, and we weave our way through their edges, hoping to remain unharmed on our way to the summit. I’ve witnessed the consequences of time spent in the mountains: friends dead, relationships broken, unhealthy addictions to that one more chance to climb. I’ve had close calls, too; giant seracs collapsing and wiping out previous camps, getting caught in avalanches, and falls that could have ended much worse than they did.

Some people would say these are reasons to stop climbing altogether, but I am not convinced. While I know that alpinism is dangerous, there is also a certain amount of freedom in the unknown challenges presented by the mountains. Freedom that is both physical and mental, but also freedom from the societal pressures that can start to weigh heavily on the way we live our lives.

There is the pressure to have a good job, buy a home, start a family and check the boxes that society has deemed important. It’s not that I don’t find value and importance in these things; I just don’t feel they should become the singular path of our lives. At the same time, I don’t think climbing should be the singular focus of our lives either. It’s balance that is necessary—a balance that enables us to step back, breathe and reflect on the dangers of alpine climbing so that we can continue to personally learn and grow and strive to be a better person for ourselves and our community. 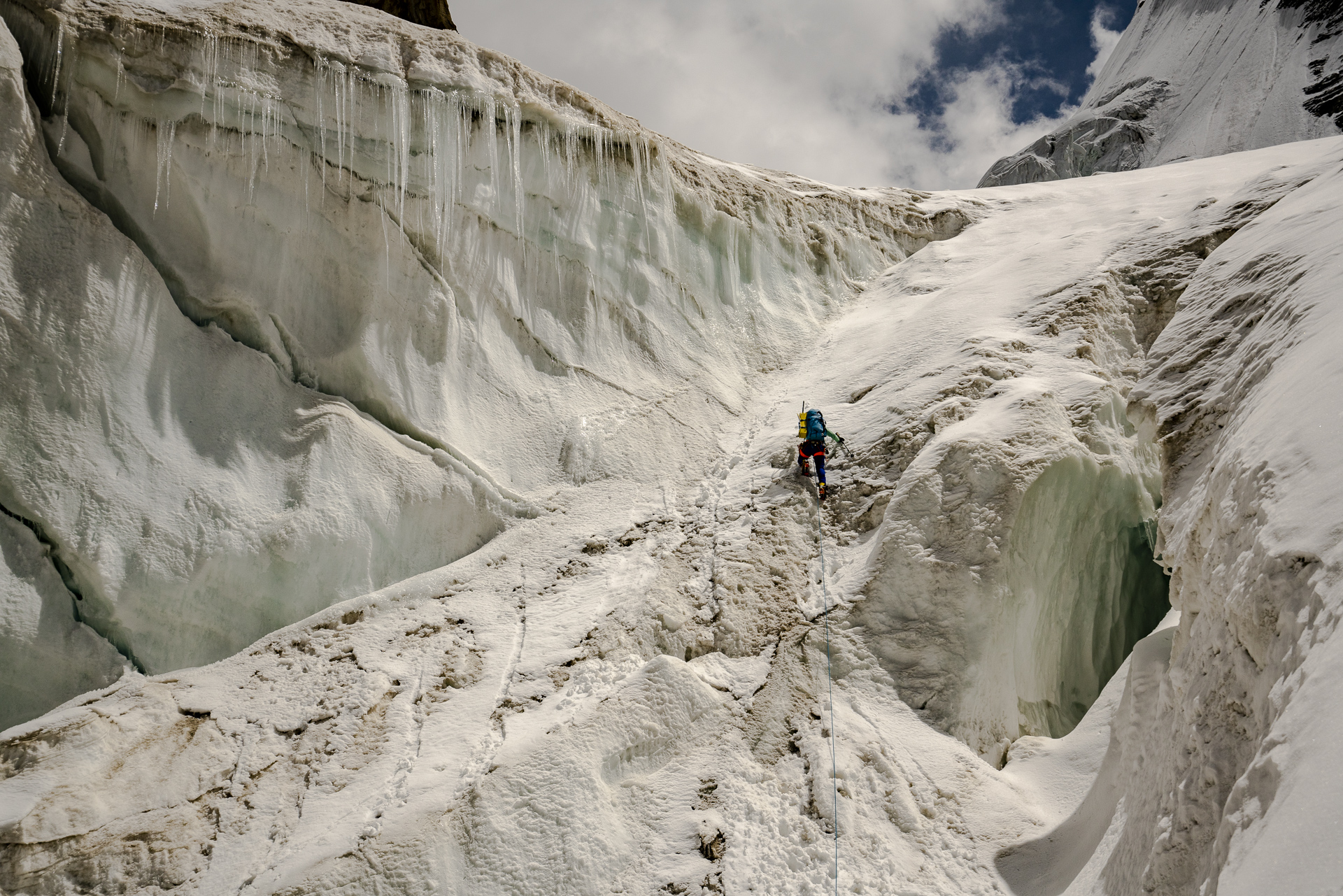 During the first week in basecamp, the team acclimated with hikes and small climbs, then spent two nights sleeping above basecamp. There are no shortcuts. Each step must be taken to understand what will be required to achieve a goal. 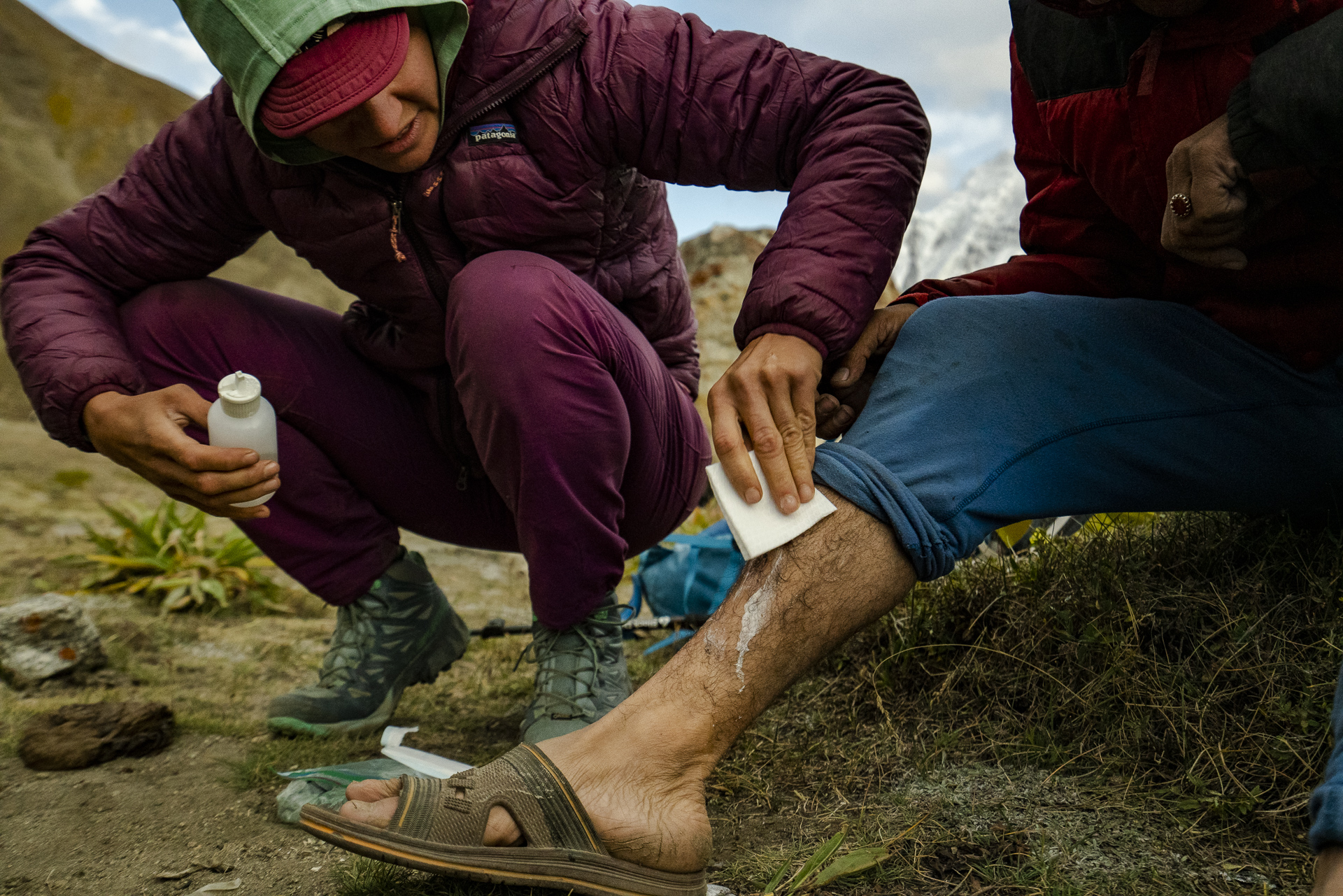 Anne Gilbert, an ICU nurse, provides a little first aid to team member and friend Ghafoor Abdul, the owner of Higher Ground Expeditions. Ghafoor is from the nearby Hunza Valley. Luckily, he had only a minor cut from a slip on the glacier. From the Hispar, it’s many miles, and several days’ travel to reach any form of medical service.

After Chantel read the weather forecast, silence filled the tent. The only thing you could hear was our shallow breathing and uncomfortable fidgeting in the sleeping bag. After a few minutes, Chantel quietly said, “Well, that is not a very positive forecast.”

Those simple words hung in the air like the condensation on the tent walls, suffocating us and our hopes. This was our last opportunity to climb Pumari Chhish East, and the feeling of failure sat heavily on our minds, knowing that our chance to summit the unclimbed peak was over.

“Well, it still shows three good days of weather; maybe we could at least go climbing and see how far we get,” I said.

As I spoke, I knew how my words sounded.

But that was how I felt. I wanted to climb, even if I knew there was no chance of summiting. I had spent the previous 12 months training and the last four weeks sitting on a glacier waiting for an opportunity to climb. Having all of that taken away from me felt wrong.

“You really think that is a good idea, to go up on a big mountain with a large storm forecasted in a few days?” Jason calmly asked.

“I don’t know. But maybe the forecast will change, and if it does, we will be in a good place. I don’t know. I just want a chance to go climbing ...” I pleaded, trying to convince both Chantel and Jason and ultimately myself. The heavy silence in the tent fell away as the glaciers and mountains around us came alive in the early morning.

“I am not willing to climb and risk everything without a chance to summit,” said Chantel. Her words were matter of fact and honest.

I knew she was right, but it made me wonder: Why are we willing to assume the risk to summit but otherwise not willing? I have returned to this question over and over again, and I still don’t have an answer.

I am constantly seeking to find that balance between climbing for the love of adventure and the simplicity of the sport, and my personal ambition and desire for success. I love alpine climbing for those unknown challenges and the process of finding a path forward with only myself and my climbing partners. The deep bond of trust and confidence that is formed between climbing partners can translate into other aspects of our lives as well. For me, risks in the mountains and in life aren’t necessarily negative things. Sometimes they can open our eyes to things we might not have seen or experienced before.

The prolific Polish climber Voytek Kurtyka is quoted as saying, “When you are totally defeated, you begin again to enjoy the small things around you. Just going to the mountains, not for victory or glory, but to enjoy nature or enjoy fine people.”

Maybe the risk of climbing mountains is justified if it brings us a deeper sense of connection to nature, humanity, and eventually ourselves. 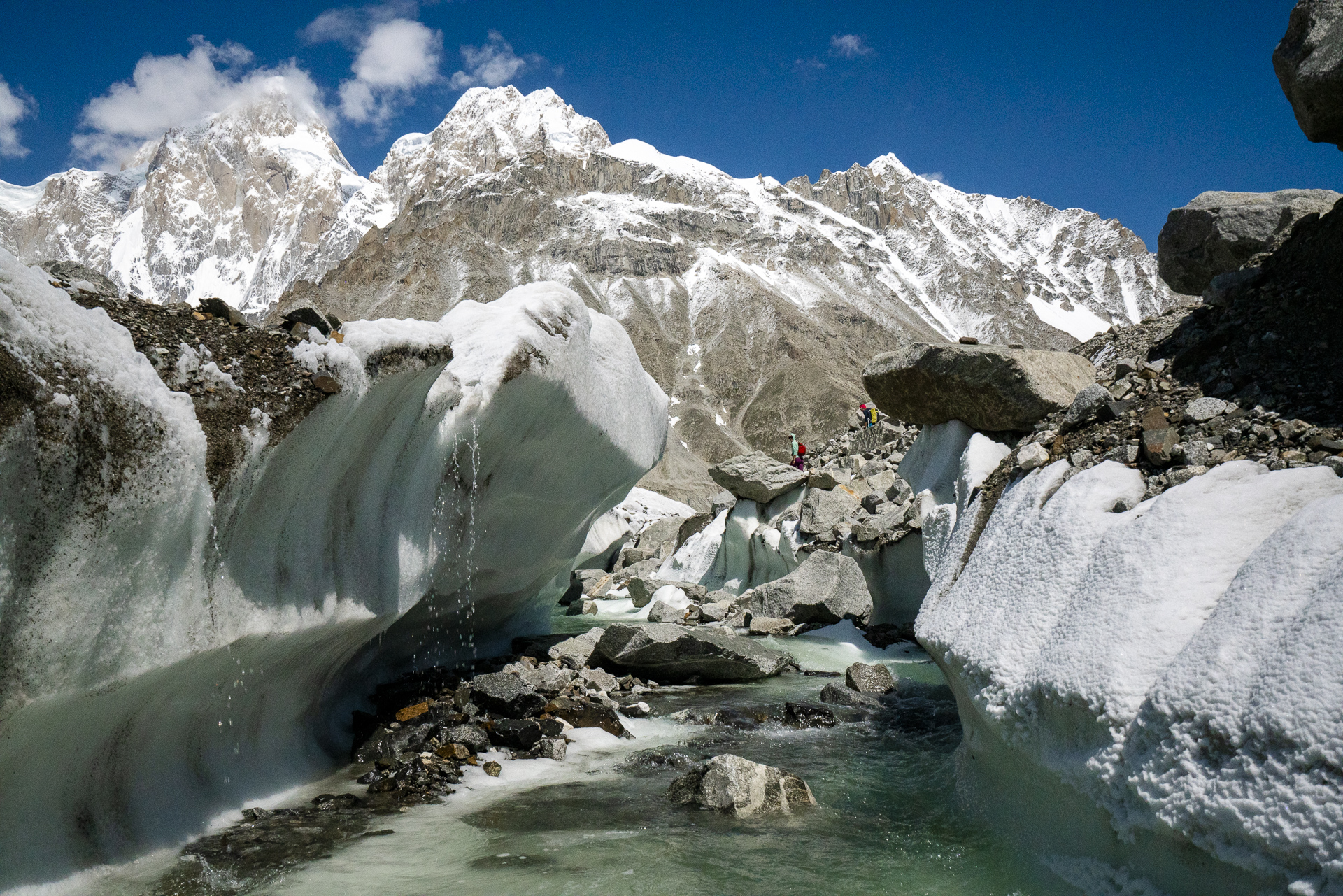 There are over 7,000 glaciers in Northern Pakistan, and most of these glaciers are retreating. The Hispar is believed to be approximately 1 mile in depth. Complex systems of water and ice. Water moves freely and quickly, creating change both fast and slow, but constantly changing. That’s Pumari Chhish massif in the upper-left corner. 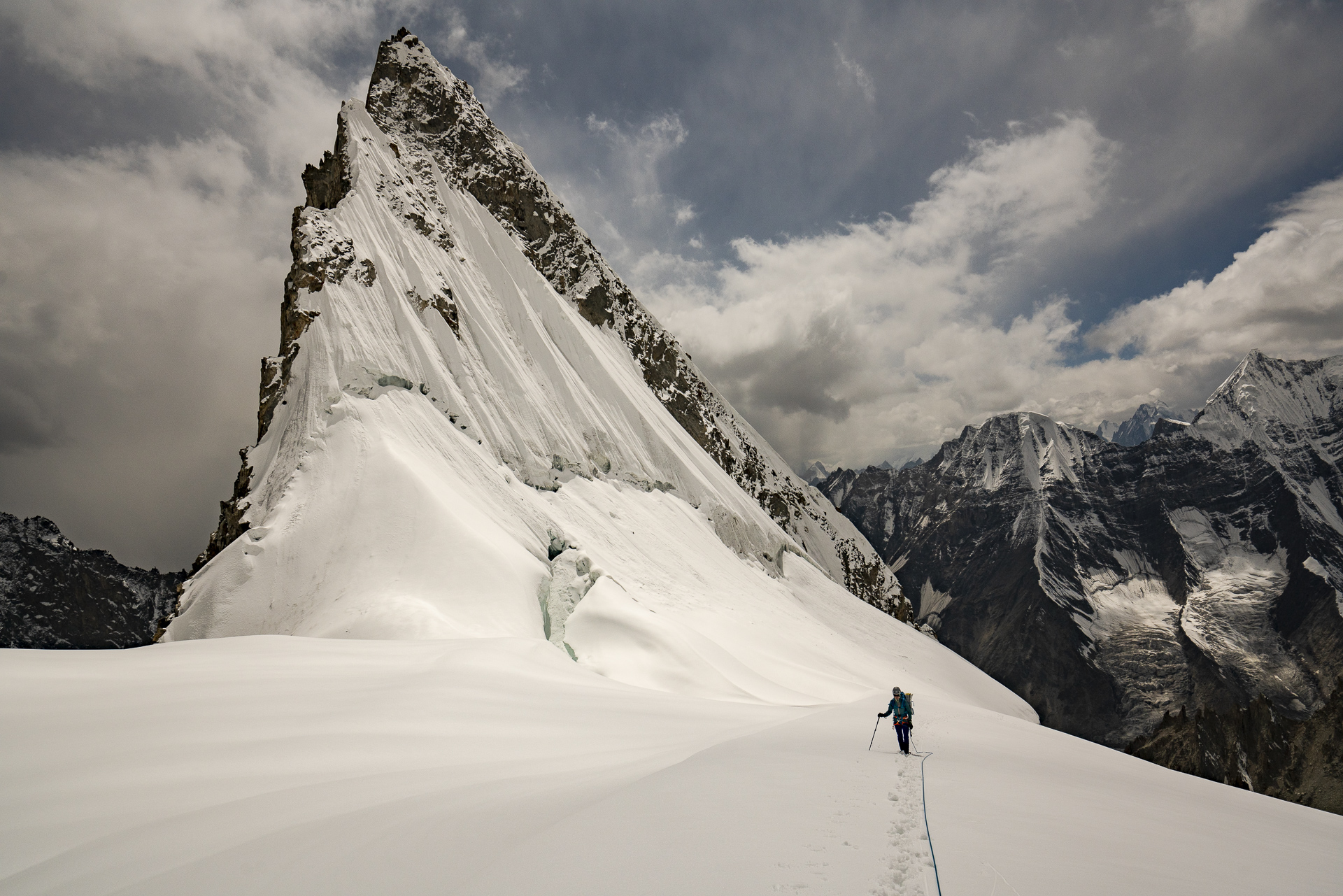 The peak to Anne Gilbert’s left is unnamed. The Hispar Glacier doesn’t receive many visitors. The team did meet one solo climber from Japan in the village of Hispar. They spent their days exploring the intricate, rugged valleys and glaciers, looking for new climbing options. 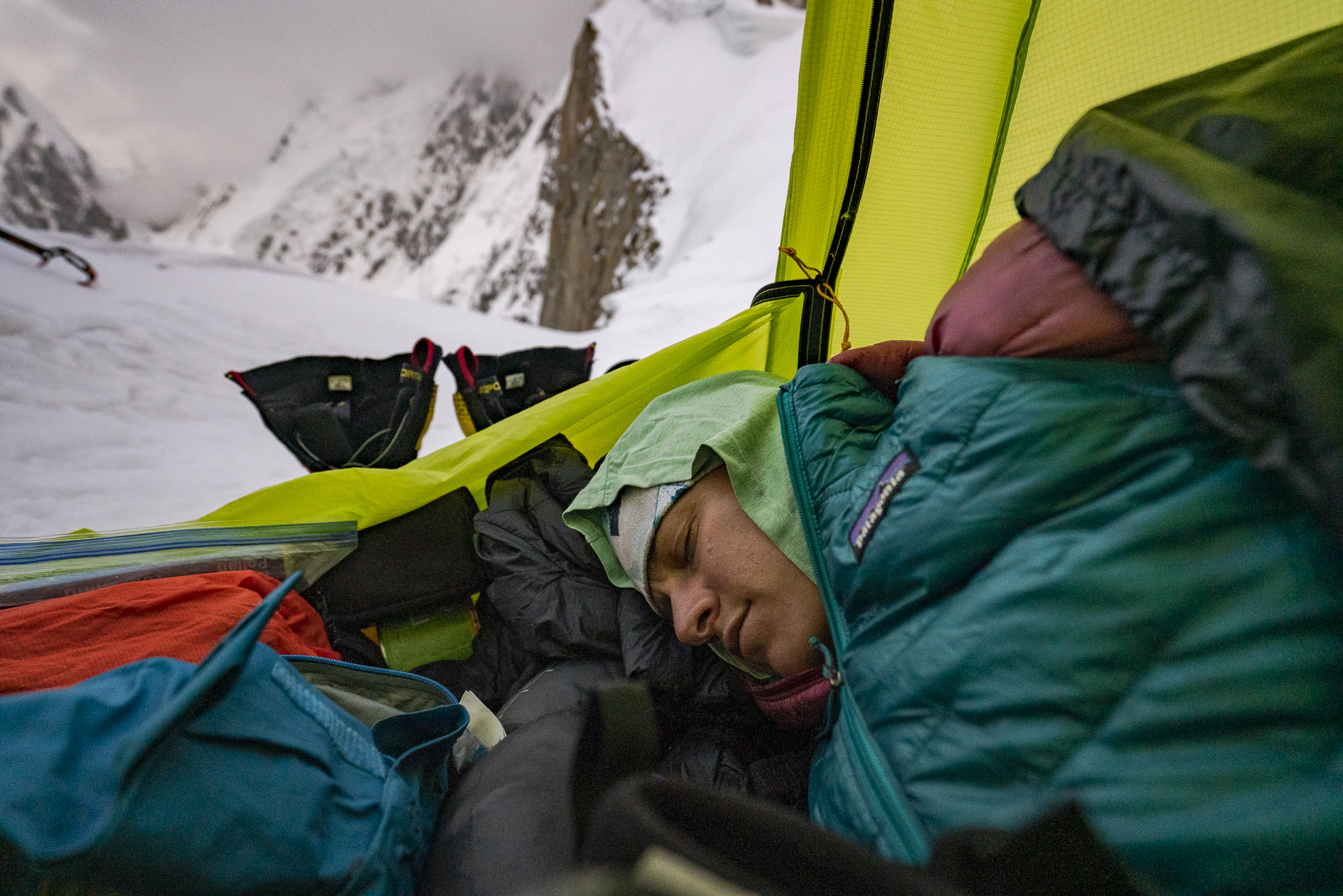 Anne Gilbert manages a mild headache while acclimating above 19,000 feet along the lower flanks of Khani Basa Sar. Everything about climbing involves a process. Part of that pro- cess is the slow and physically taxing adjustment to higher altitudes. 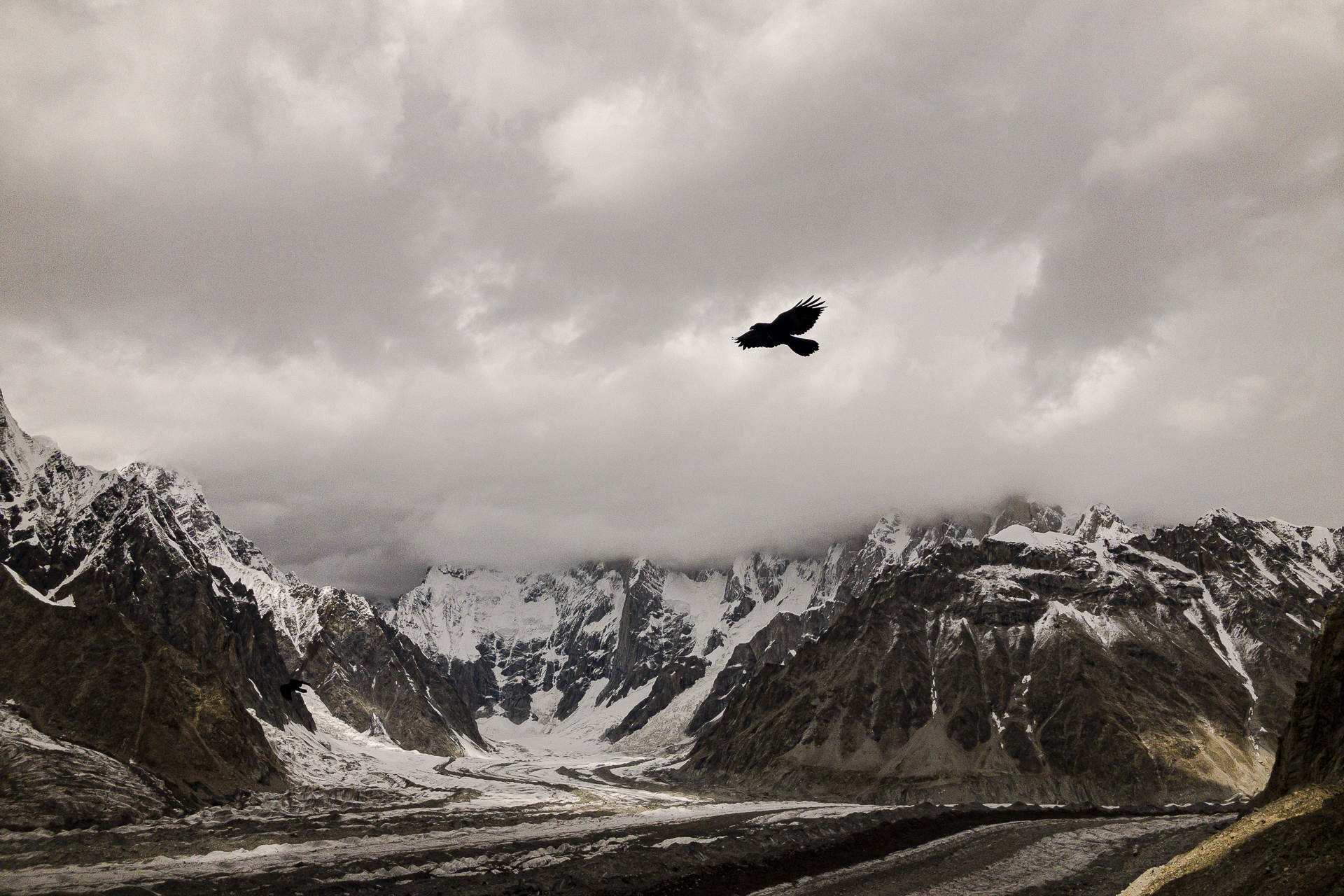 Looking up at the storm on Pumari Chhish massif, weather that stubbornly refused to lift. Before Chantel, Anne Gilbert and Jason left to climb in the Himalaya in 2017, their friend Hayden Kennedy gave them pitons made by a Slovenian friend of his. On this Pakistan trip, they each brought a piton to leave in remembrance of Hayden and his girlfriend, Inge Perkins, who both died that same year. “We felt their spirits with us in the mountains,” Jason says.

IMPORTANT NOTE: This story has been licensed by Patagonia Inc. and can only be further licensed to companies that are not their direct competitors in any respective fields of the market. 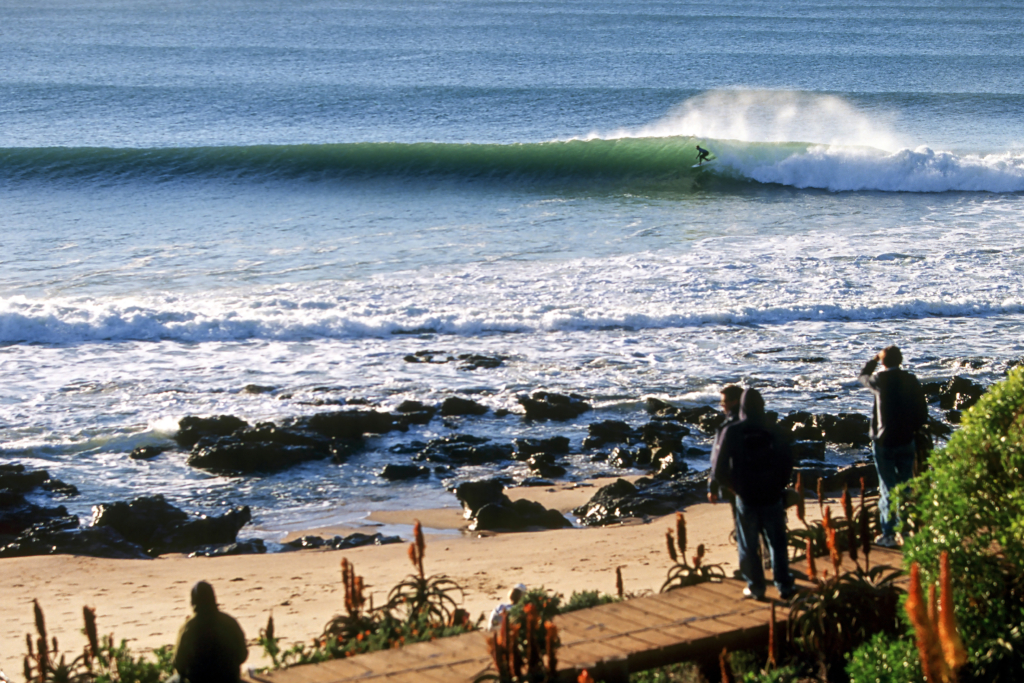 Africa is made up of 54 independent countries and Africa is big - very big. 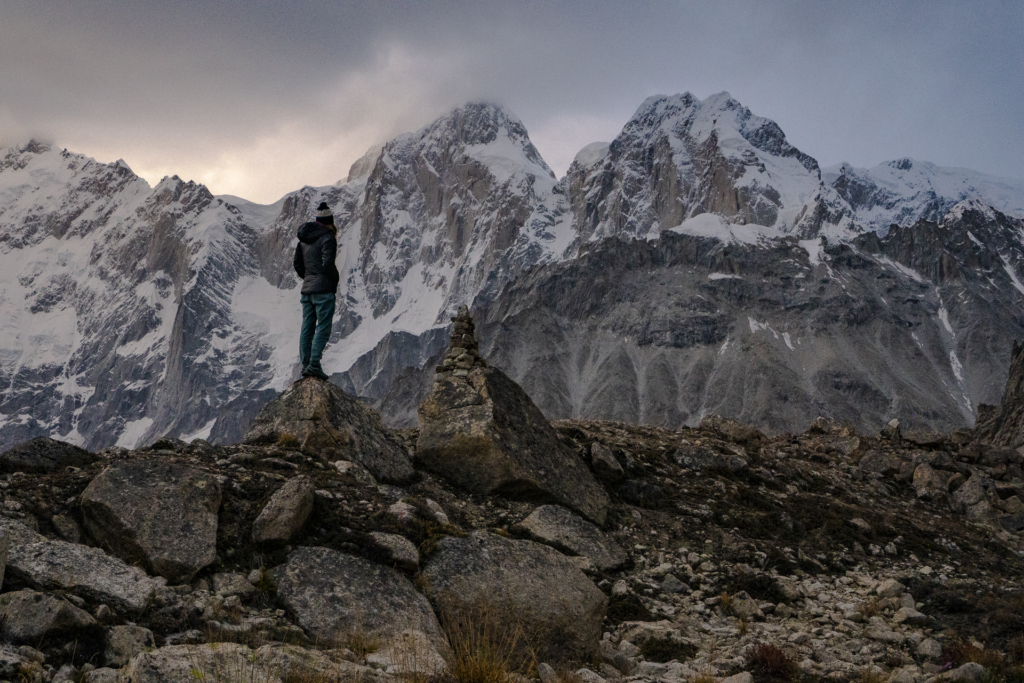 Reflecting on risk and partnership in Pakistan. 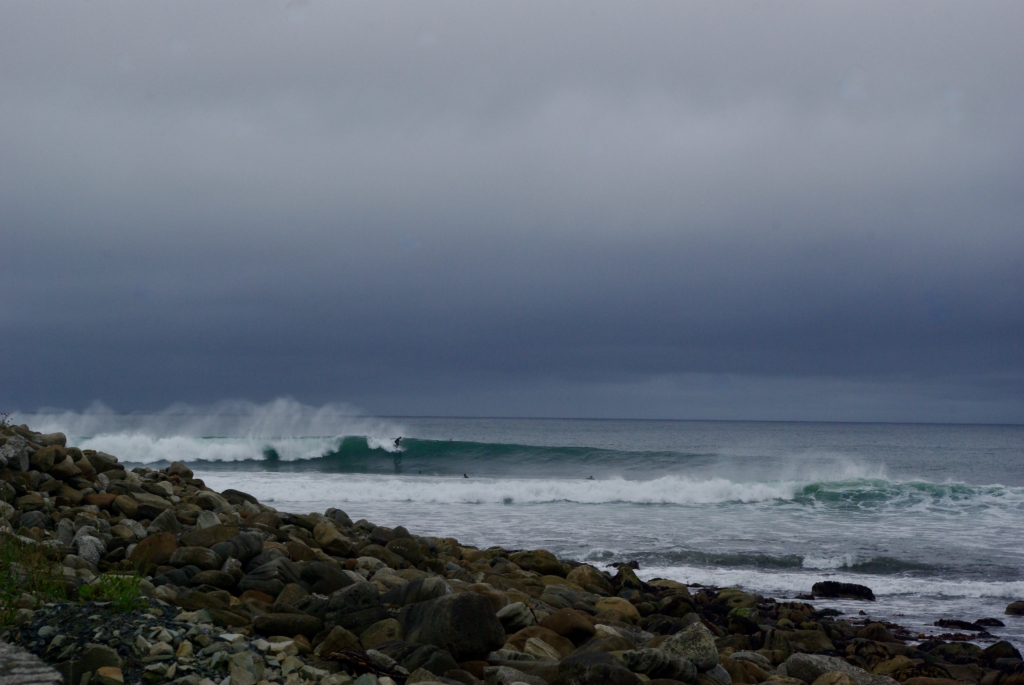 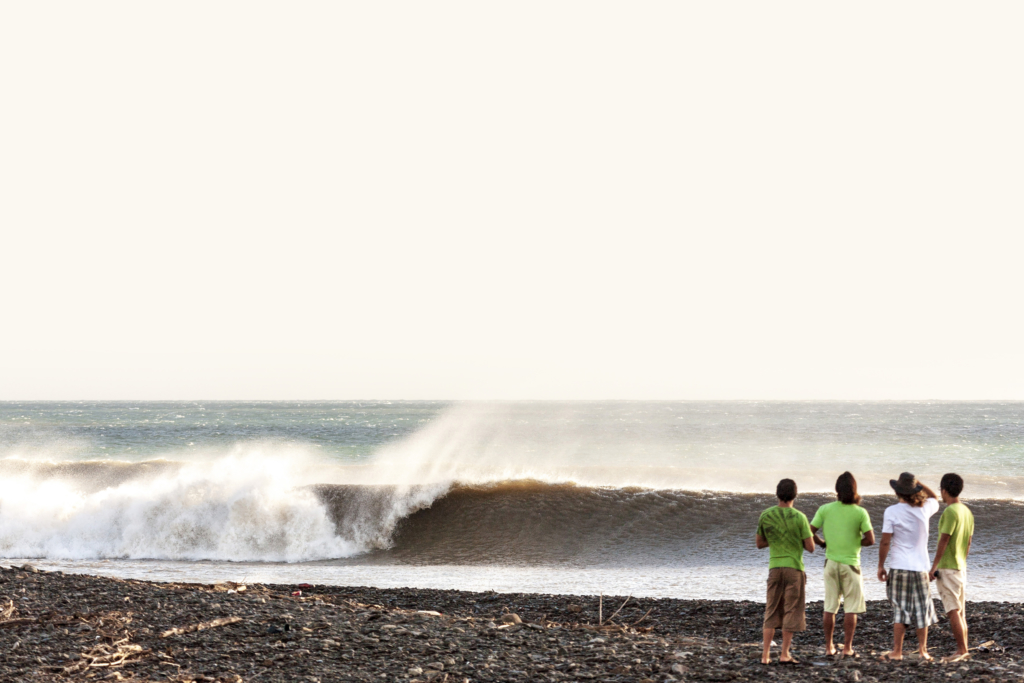 The British publication The Economist recently named Taiwan in a cover story as ... 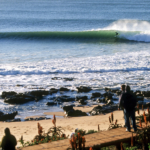 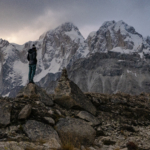 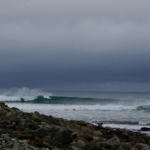 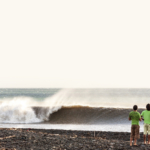 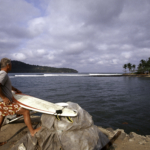 São Tomé and Príncipe – Blood and Chocolate in the Atlantic Ocean 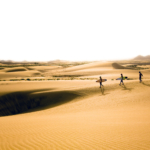 Oman – Under the Desert Sun in Arabia Felix 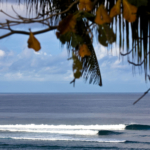 Comoros – Under a Silvery Moon on the Indian Ocean 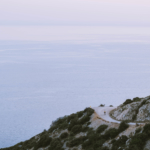 Finding an adventure where the excitement is not expected