The Long Way Home
Matthew Tufts
Follow
99
5
A father and son race an ultra marathon over the dusty roads and trails of the community they were raised by. 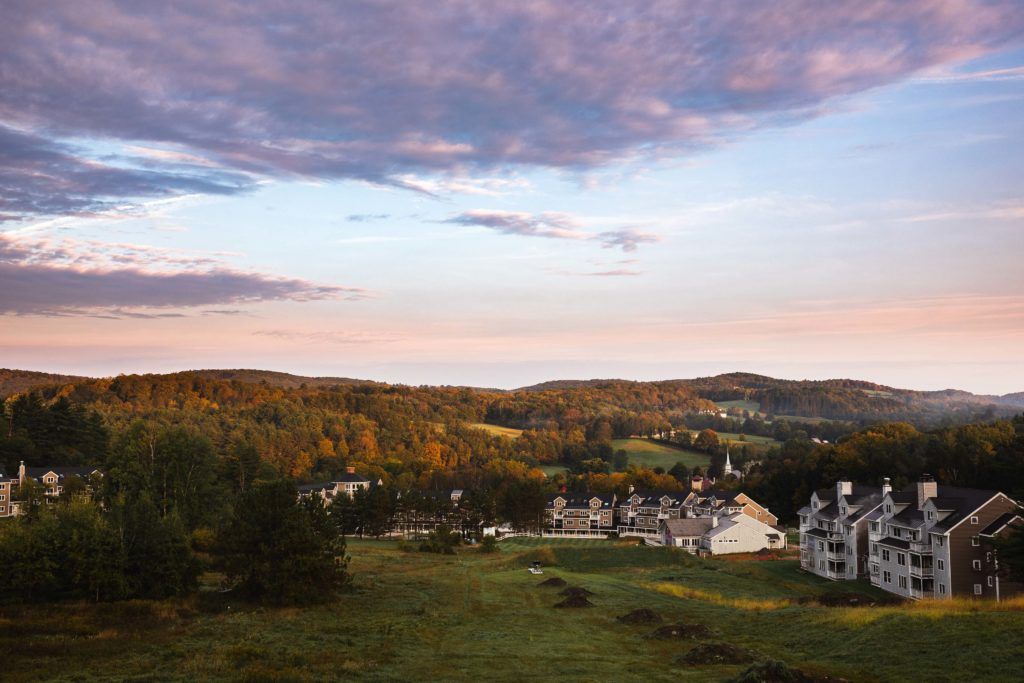 A stillness hung over the frosty Vermont autumn morning, penetrated by a slight breeze rippling through pop-up tents. Soft dappled light crept across the hills illuminating the first signs of foliage change—oranges that would soon be reds, yellows that would burn vibrantly in a matter of days. Wisps of fog crescendoed from the dew in the valleys below and the low murmur of sleep-deprived voices invigorated by caffeine and cold hummed through the air.

We milled around with several hundred runners—some looking like the experienced endurance athletes they were: systematically stretching, consuming GUs, decked out in lycra, sporting visors and headbands and specially-tailored water bottles; some just looking like my neighbors (as they were)—ordinary folks out for a morning stroll, no more than a casual jog through the woods. My dad sipped coffee next to me, pacing in his trademark soccer shorts and Windsor High School trucker hat, looking the same as he did on the sidelines when he was my varsity coach nearly a decade prior. Maybe he had a little more grey in his beard this time around.In those years, we’d both come to this race under different circumstances. My father, Andy Tufts, has volunteered at the Vermont 50 and Vermont 100 races for the past dozen years as an EMT, race official, and in any other capacity they ask of him. I vividly recall helping in youth on some torrentially rainy days, marking times and checkpoints for runners at the Johnson Farm aid station with the help of some high school friends and teammates. 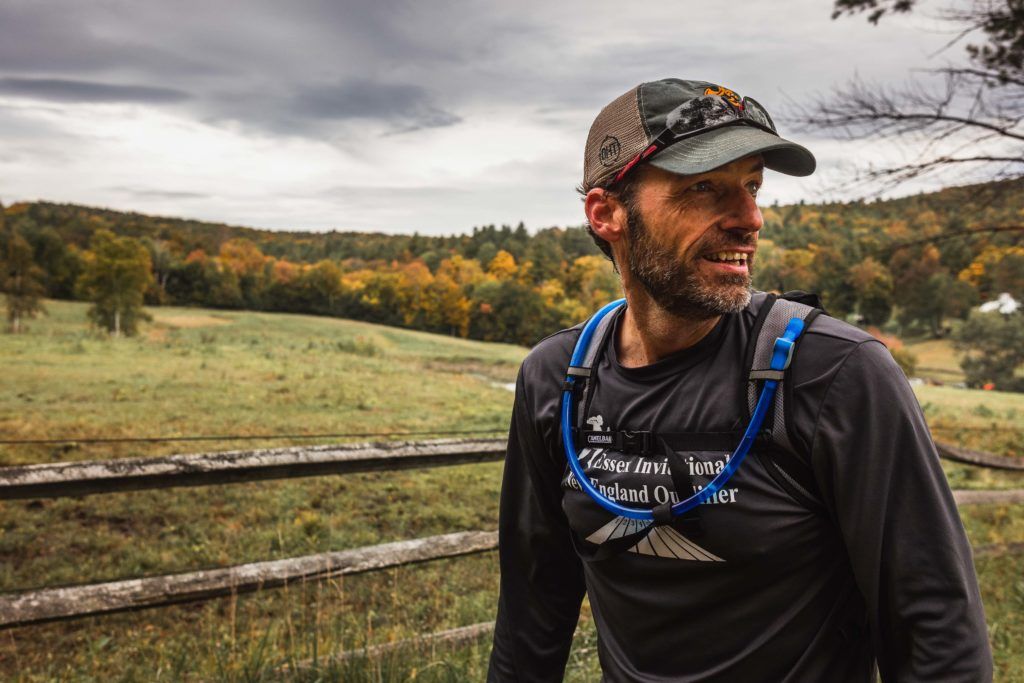 —Andy’s life has always revolved around community service. He was, perhaps, born into the role as the son of a pastor in rural Danby, Vermont. He attended the University of Vermont to become a teacher and was simultaneously active in the Emergency Medicine Living/Learning program, later worked as an EMT in Chittenden County, and ultimately moved to the Upper Valley in his mid-to-late twenties for his first full-time teaching gig—the same place he works today, more than 25 years later.He’s currently the most senior staff member among Windsor High’s educators, has served as  athletic director and interim vice principal, coached soccer, track, softball and basketball, served on the town’s select board for a term, and still finds time to volunteer as an EMT in the neighboring village of West Windsor. You could say he wears a lot of hats, but really he only alternates between a worn WHS Yellowjackets trucker and a sun-faded Patriots cap; perhaps he’s better considered a man of many socks.I first approached my dad about running the Vermont 50 when I was preparing for my own first ultramarathon out west the spring before. I don’t know if he had ever previously considered running that distance—he had never run a marathon at that point, let alone an ultra—but my gumption and the promise that I’d stay a few weeks at home with he and my mom seemed to galvanize his competitive spirit. We signed up within the first thirty minutes of registration going live. 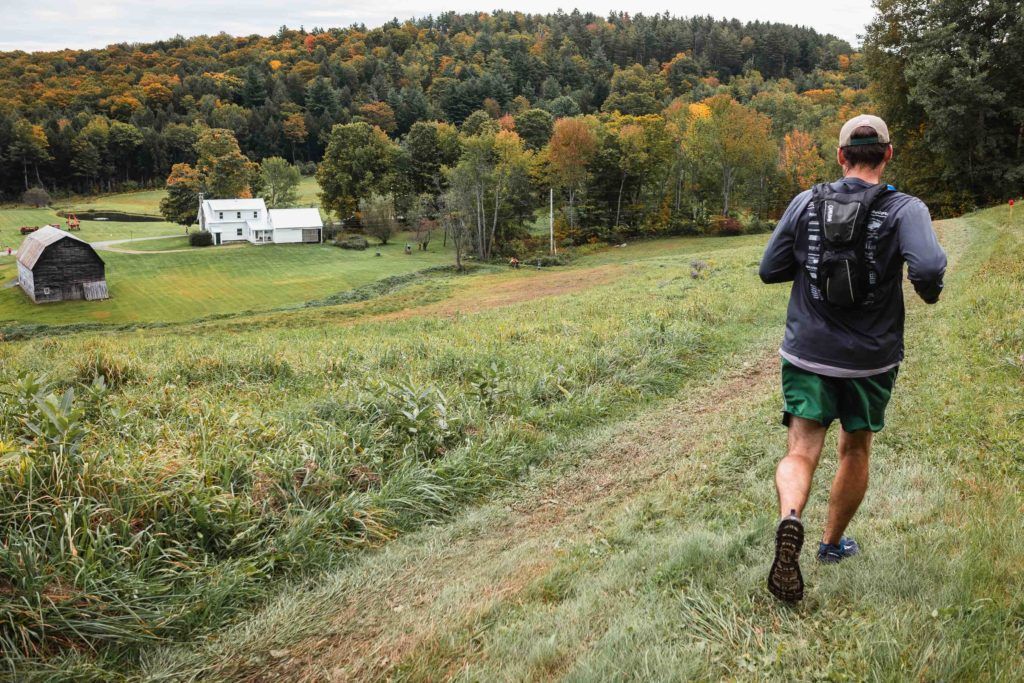 —Like a herd of nervous holsteins, we all shuffled awkwardly toward the start line. The sun peered through the haze—a welcome sign for a race that has a recent history of bad weather. I looked up at my dad (I have my mom’s height), said something like, “Well, you ready?” The gun sounded and we were off.If not for the few hundred other runners jockeying around the switchbacks at the start, it could have been a run in the backyard with my dad. These were all places we knew—roads we’d run, ridden bikes, walked the dog. As the throng dispersed along the first steady climb, I jogged my brain down memory lane: take the turn before the General Store, pass the Christmas tree farm on the right, hard left up the steep hill…

My dad has a knack for geography (he should, he taught it for nearly a decade), particularly the minutia of rural Vermont. He explained the course better than most race directors could, noting friends’ farms and homes along the way, how continuing on this dirt road is a shortcut to the next hamlet, why that 4×4 road is gated but if you know the right guy, you can get the key. 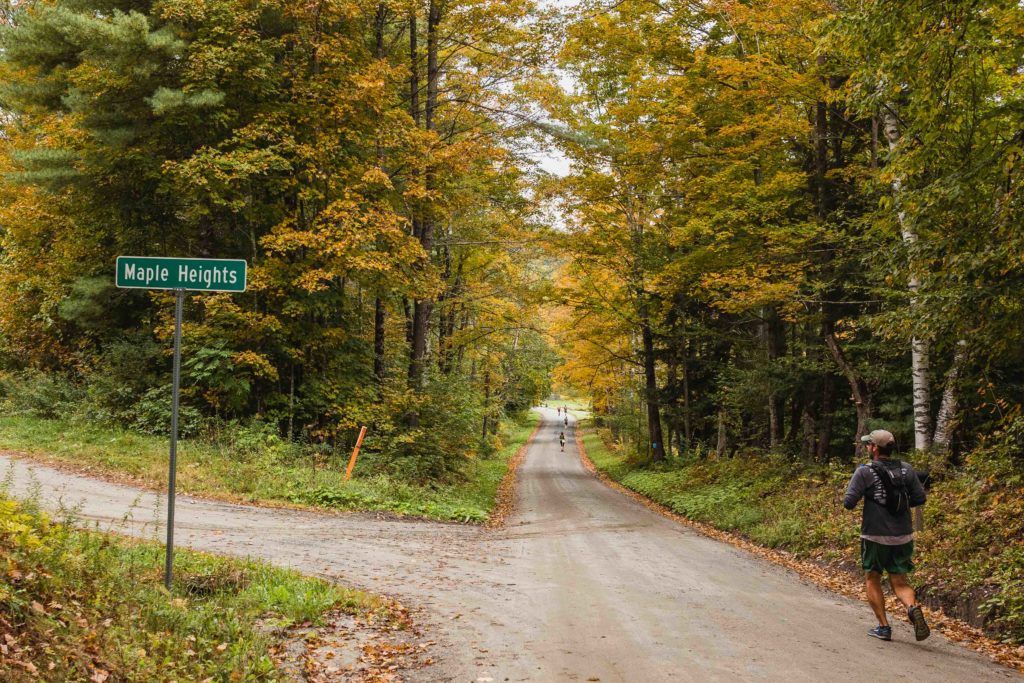 We’re greeted by friends at almost every aid station—it speaks to the size of the community, but also the breadth of Andy’s network. A former student greets us around the halfway mark with her son, now a current student at WHS. A member of the volunteer FAST Squad high-fives my dad as we veer from dirt road to single track trail. I haggardly tell my dad near the final leg that all I want in the world is for our former assistant soccer coach to be at the final aid station handing out grilled cheese. It’s peanut butter and jelly, as it were, but Glen Drost is still there beaming as we pass through the Johnson Farm as racers, not volunteers. Memories mix with present moment.My dad is quite familiar with the last several miles. They’re new to me—I haven’t been back home much since the local mountain community built these trails. A lot has changed in those years, and a lot has stayed the same. As we cross the finish line, I see dozens of familiar faces—I’m sure my dad sees even more. Andy is part of the fabric of this town, and this race, and those meandering dirt roads are the intricately woven threads that bind us all together. 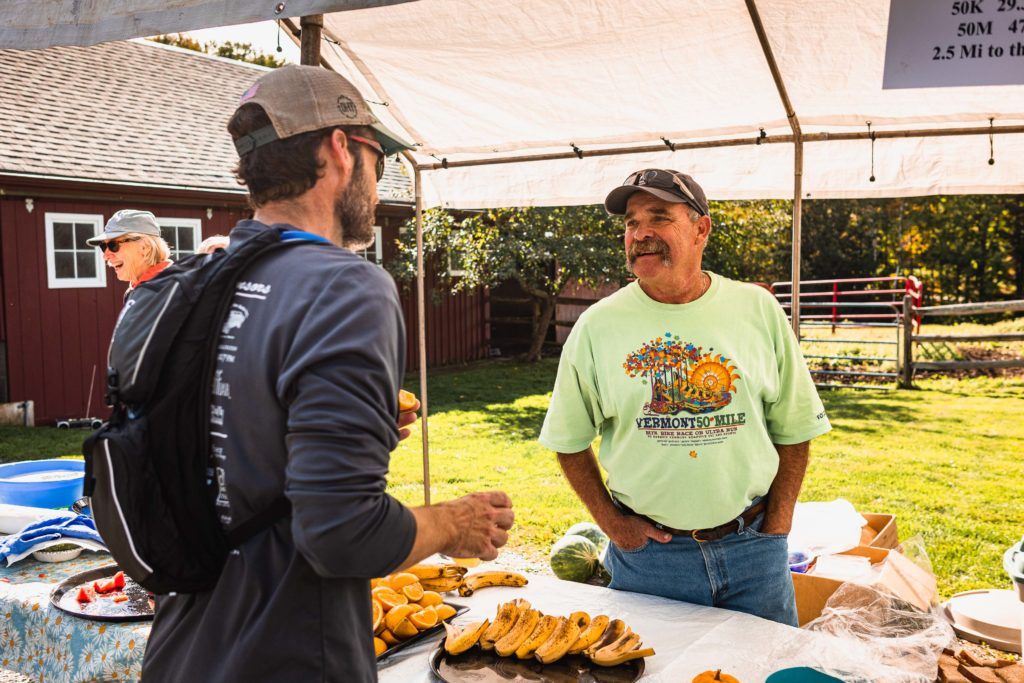 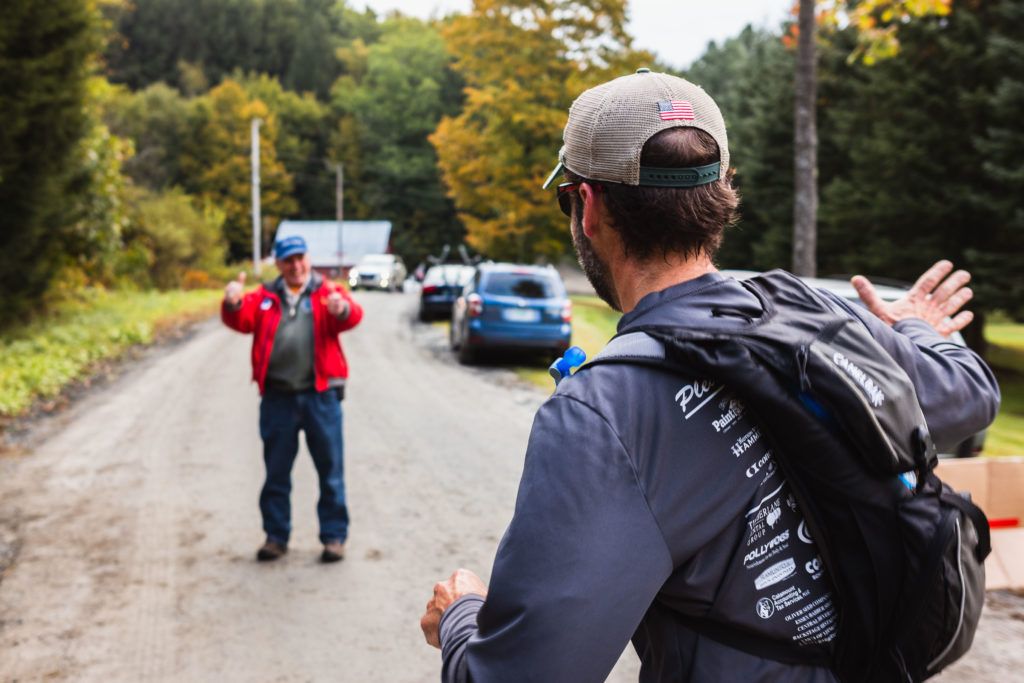 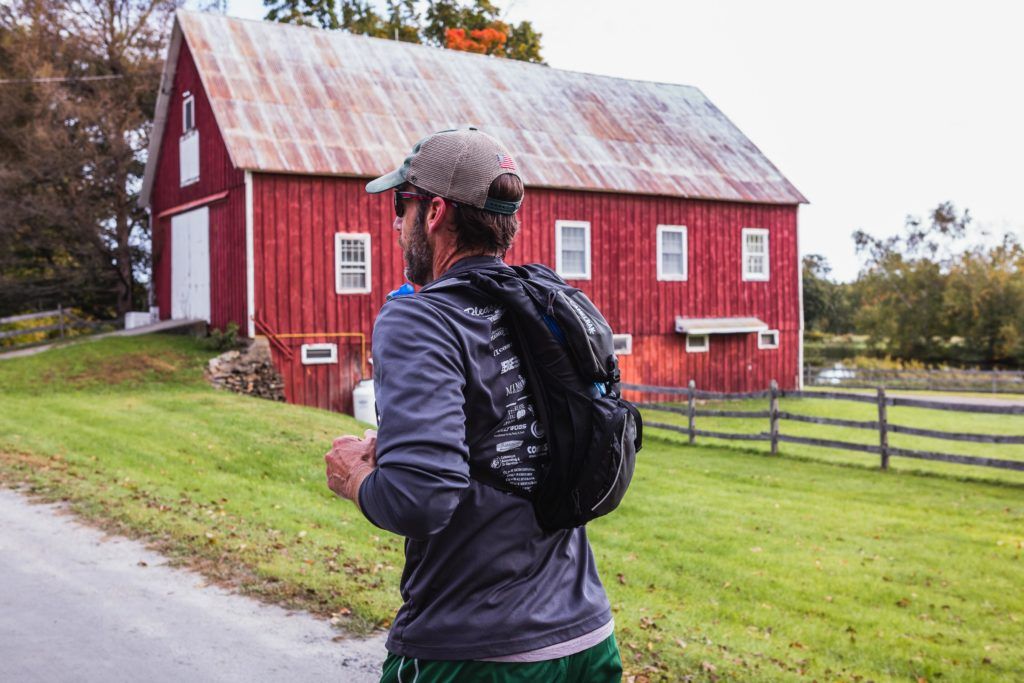 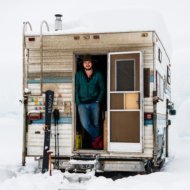 Matthew Tufts
Matthew Tufts is a freelance photographer and journalist focused on the intersection of outdoor recreation, wilderness conservation, and rural communities.

Be the first to review “The Long Way Home” Cancel reply