My first visit to Joshua Tree National Park 15 years ago nearly ended in that kind of tragedy. A buddy and I were down from Anchorage, Alaska, to climb granite splitters in the desert sun. After a week of constant climbing, we needed to give our destroyed hands a break.

A day hike through the spectacular Wonderland of Rocks seemed the perfect ‘rest day’ activity. We had been hitting the climbing areas on the Wonderland’s outer fringe and thought it would be cool to explore the inner workings of this labyrinth of stone. We replaced the climbing gear in our daypacks with some energy bars and a couple of liters of water. At the crack of dawn, we headed up a wash and dove headfirst into the Wonderland with the plan to magically emerge in Indian Cove before nightfall. We didn’t have a map, GPS, or route plan for crossing the five miles before us. But hey, we were climbers from Alaska, and this was just a ‘hike.’ It took us eight hours to run out of water, 12 hours to admit that we were hopelessly lost, and 36 hours to find our way back out to the trailhead.

I remember my partner looking up through a few hundred feet of boulders to an airliner jetting across the sky and rationalizing which way we needed to go because that plane was headed to LA. I remember feeling the panic that we were not going to survive this one, that we were going to make the local news as stupid tourists get lost in the park and die (didn’t they know better?). I remember sitting on the curb back at the trailhead, dirty and bloody, chugging water only to vomit it back up. It took us days to recover from this ‘rest day’ hike, and we never got full strength again on that trip. 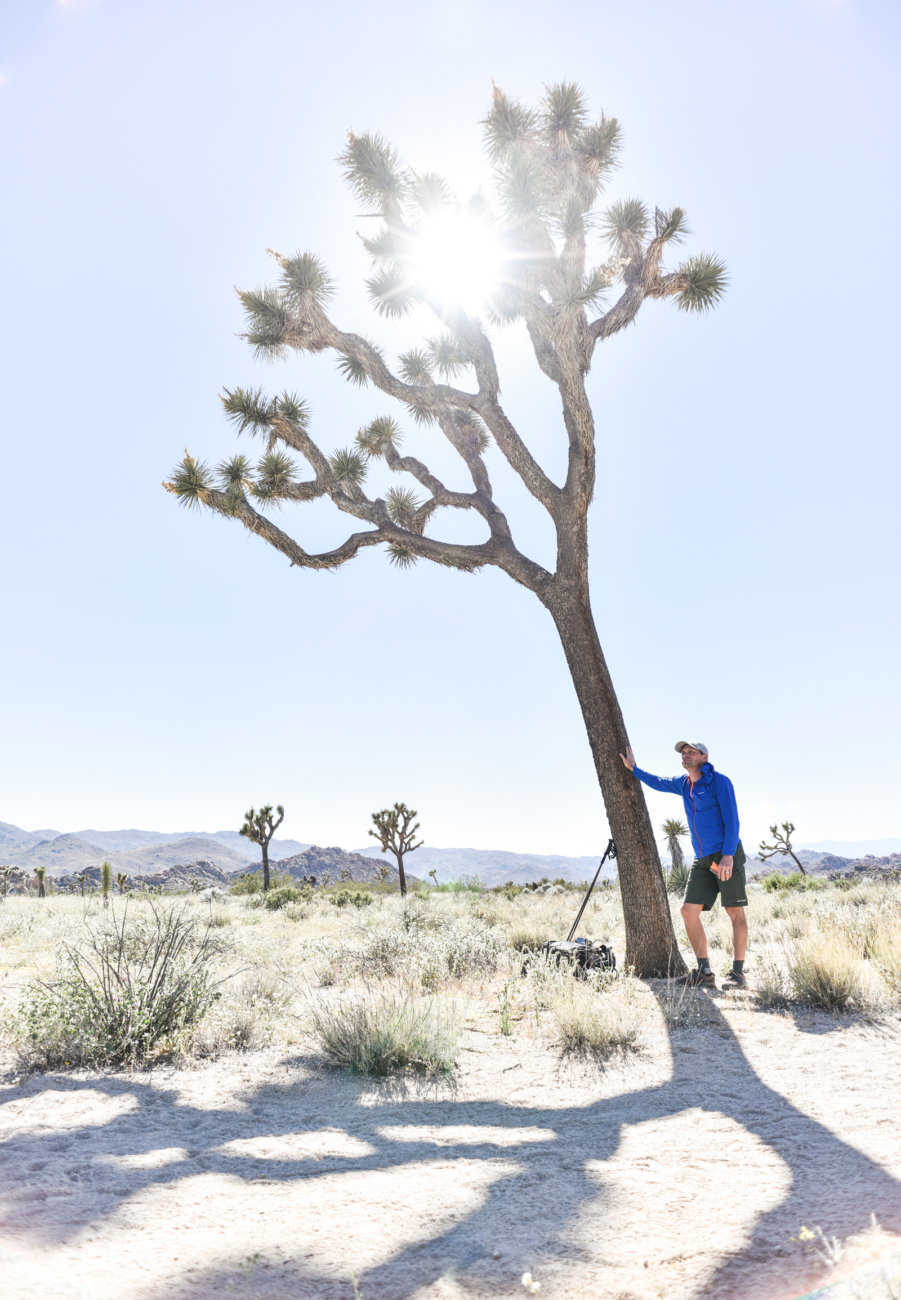 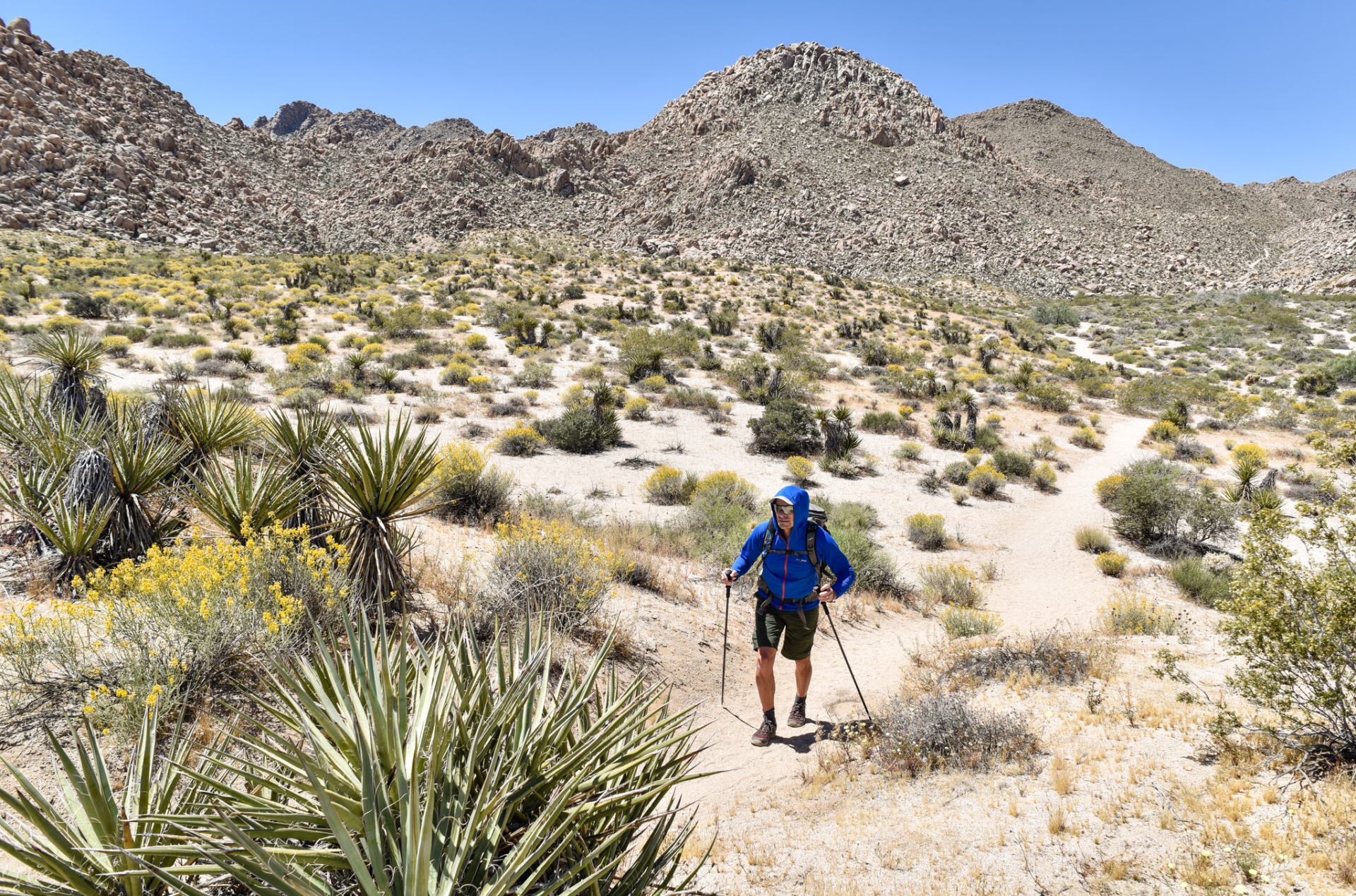 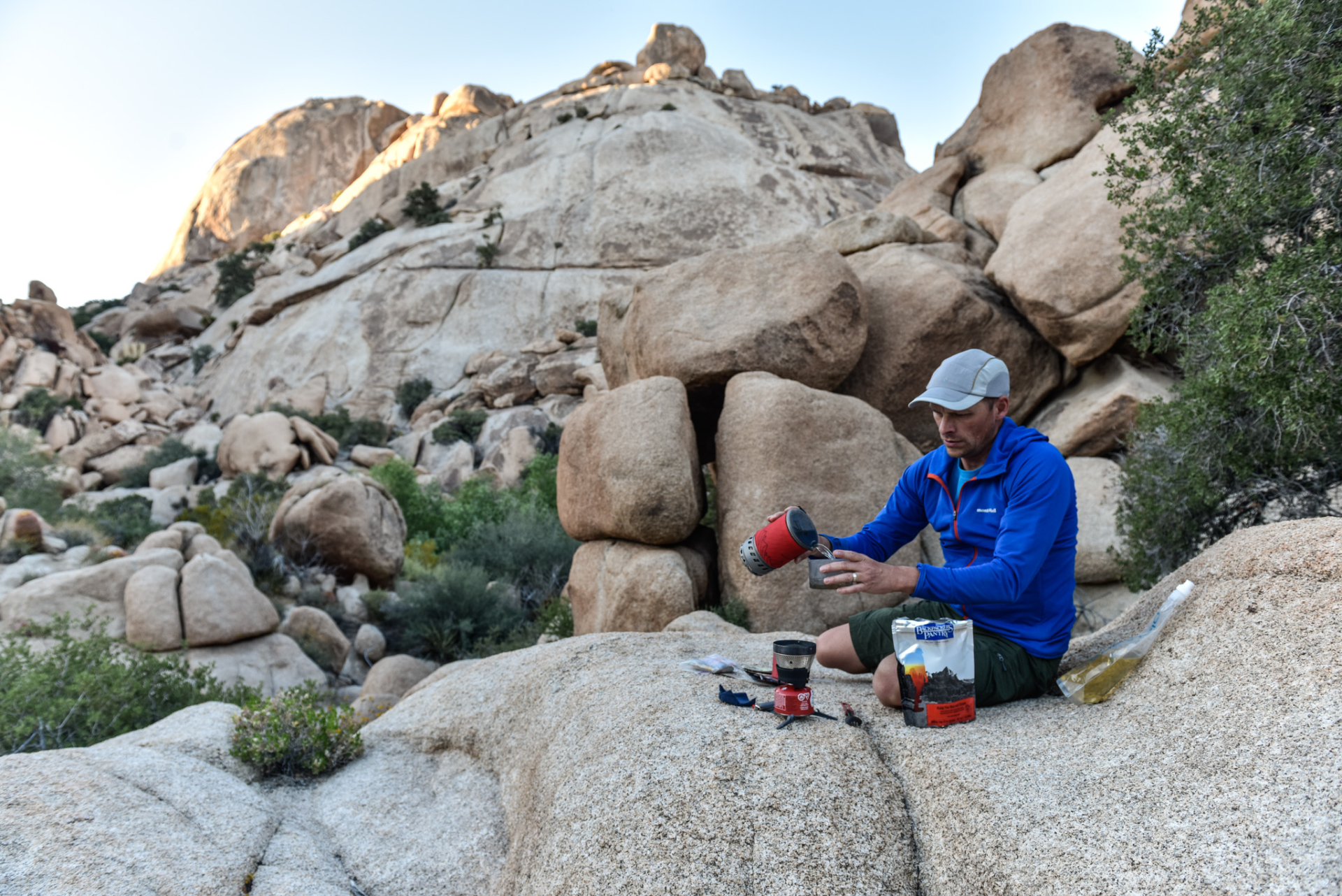 Bivouacs in the Wonderland of Rocks.

The beating dished out from that massive pile of rock still measures as one of the most severe I’d ever received outside of Alaska (Denali can dish out punishment on a level all its own). Since then, I had been back to Joshua Tree a half dozen times and even back to the Wonderland of Rocks. But always staying out in the perimeter, never venturing back into its inner sanctum. Like any worthy opponent, the thought of a rematch always lingered.

Things lined up this spring, and I made a plan to cross the Wonderland with my wife (and main adventure partner). Then a climbing accident left her on crutches with a wounded ankle. It would be easy to postpone this hike until next time, or maybe this was something I should do on my own. A solo mission to test how far I’d come in a decade and a half. On May Day, I started from the Indian Cove backcountry board, cruising the well constructed Boy Scout Trail at a good clip. It took me about eight miles up over a couple of passes into the Joshua Trees and Willow Hole. I filled my water jugs at this perennial spring before continuing to the heart of the Wonderland, a great granite wall of boulders and spires.

I made my bivouac on the last patch of flat ground before attaching these craggy ramparts. 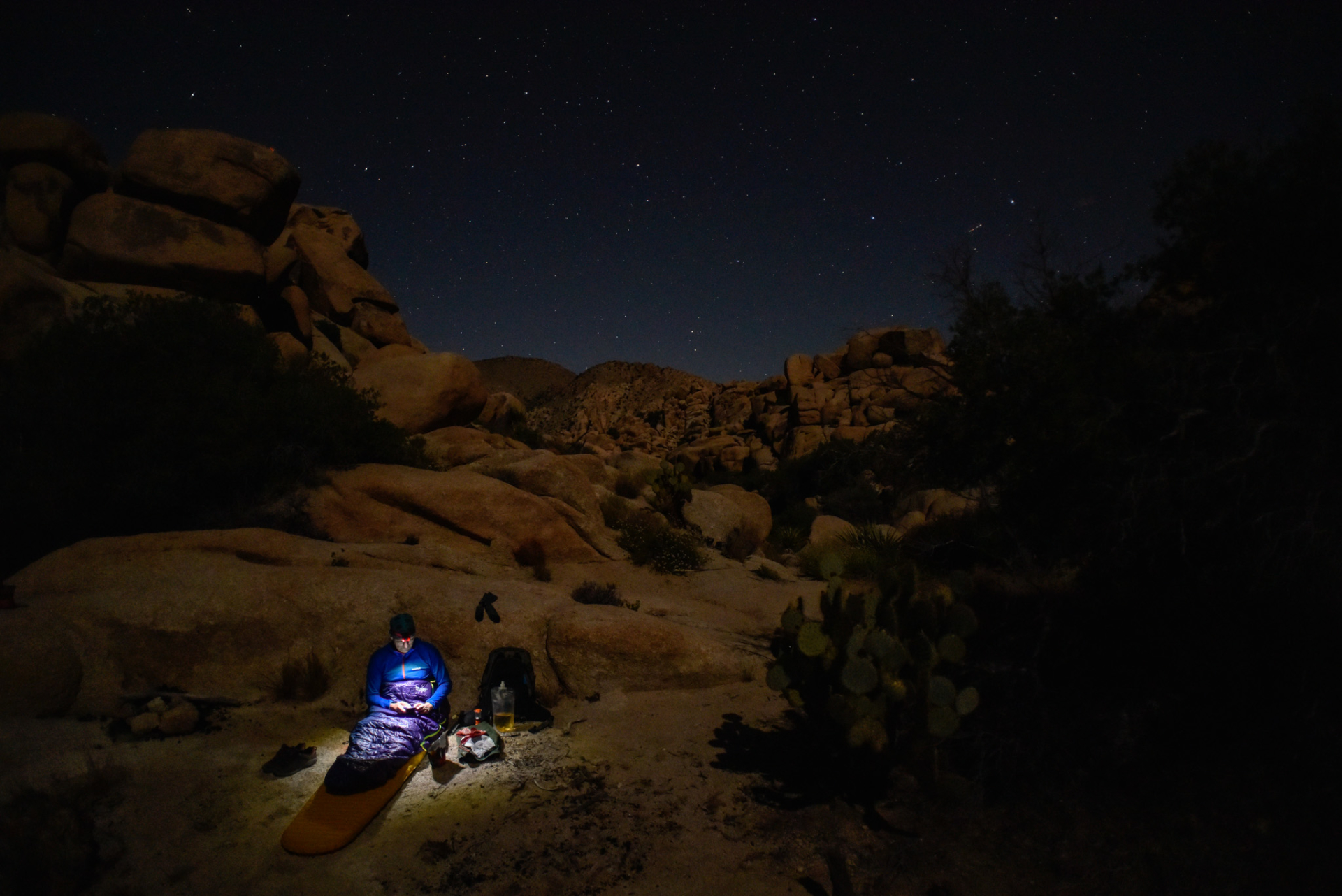 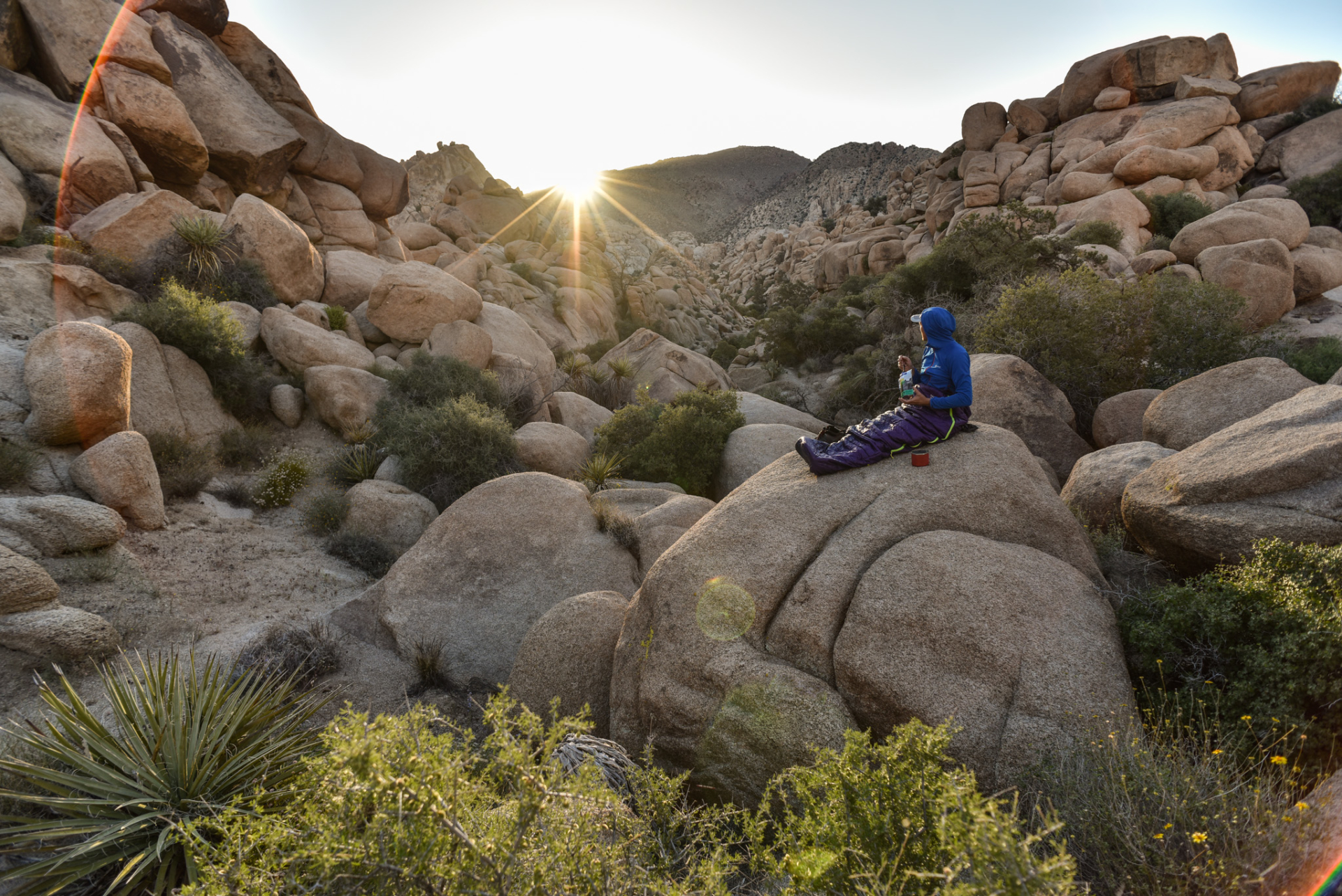 The crux day began at sunrise, and I quickly got bogged down in choosing the correct notch in the rocks to dive into. For this to work, each weakness in the wall of boulders needed to lead to another weakness (and another). The deeper I crawled into the Wonderland, the rocks became house-sized. You couldn’t consider this a hike, rather more of a scramble or a climb. Sometimes it’s closer to spelunking when I tunnel down into the nether region beneath the rocks just to get closer to the ground. Not that I ever found the ‘ground.’ This was one of my last resort tactics when ‘The Way’ would not show itself to me. I gave myself a one-hour time limit on trying to find a passage through the most difficult spots. After that, I forced myself to reverse my steps and try a different route. This happened too often, and by noon I didn’t feel like I was making much headway. My GPS confirmed that. 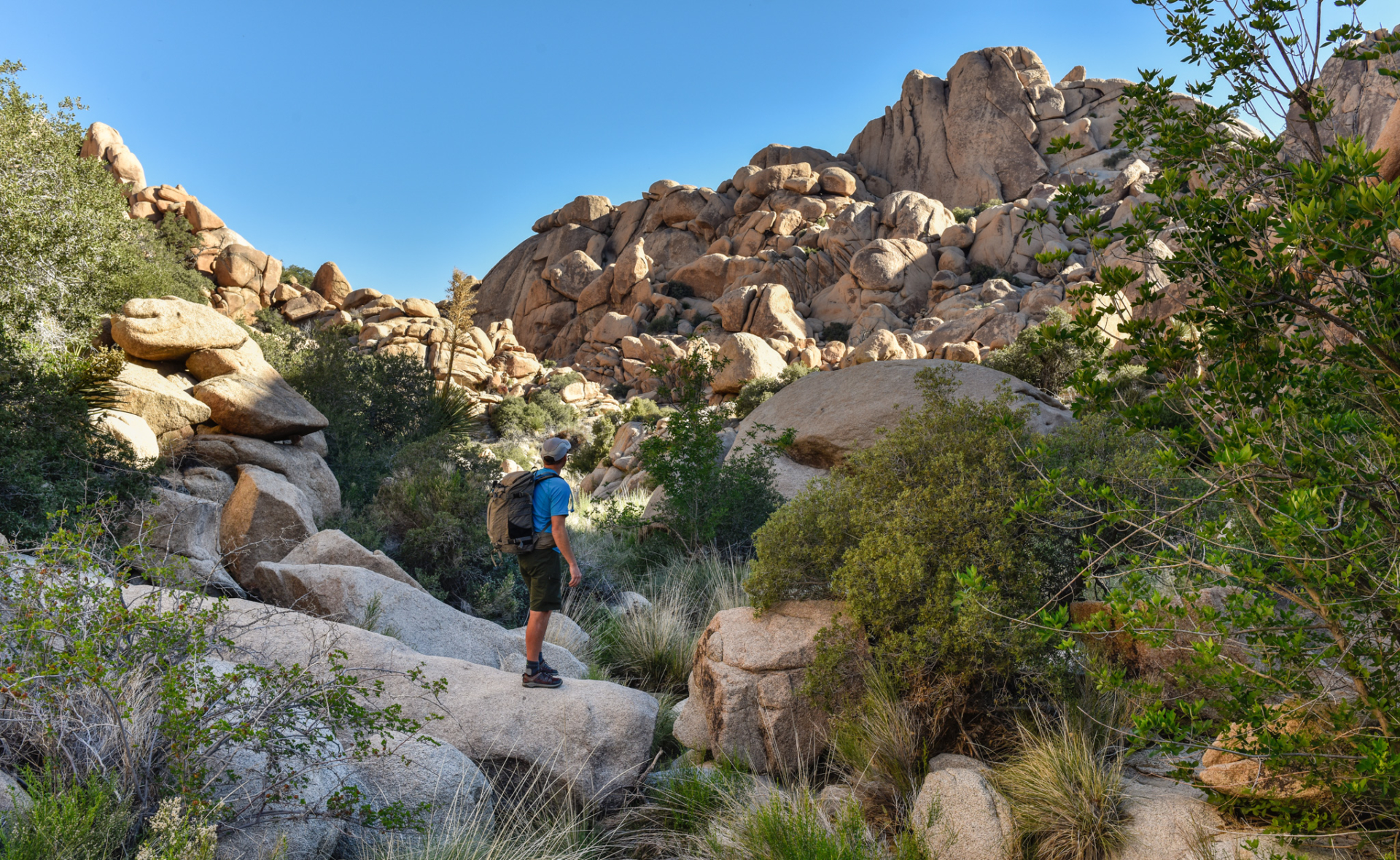 Picking his way through the Wonderland of Rocks. 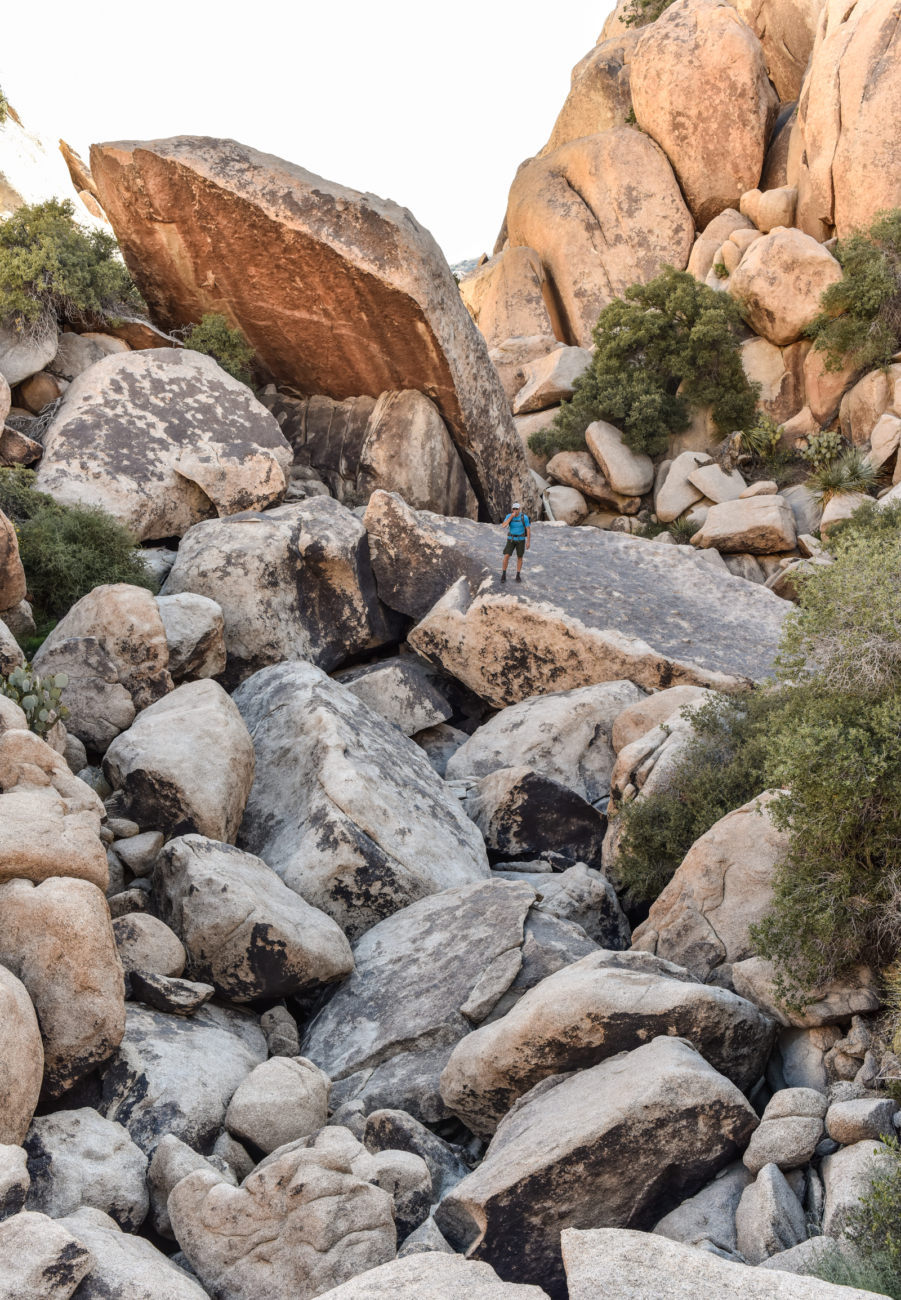 It was much hotter than I expected, 98-degrees in the shade. The heat sapped my energy, and the endless puzzle of route finding wore on my psyche. Then I reached a point of no return, a drop down into the boulders that would be very difficult to reverse. My pack had to be lowered first, and then I jumped down. There, the ships were burned on the beach. I punched forward with renewed vigor, probably adrenaline. Clamoring, squeezing, tunneling, chimneying; every technique I could think of was used. Pulling up onto a large boulder, I spotted the unmistakable water-carved slot of Rattlesnake Canyon. A sigh of relief as it signaled an end to the difficulties. It would take an hour more to break free of the Wonderland and another hour in the hot, late-day sun walking back to the trailhead. Dirty, bloody, and with more than a few scrapes, I sat in the shade, sipping my water this time. Guess I have learned some things over the years. 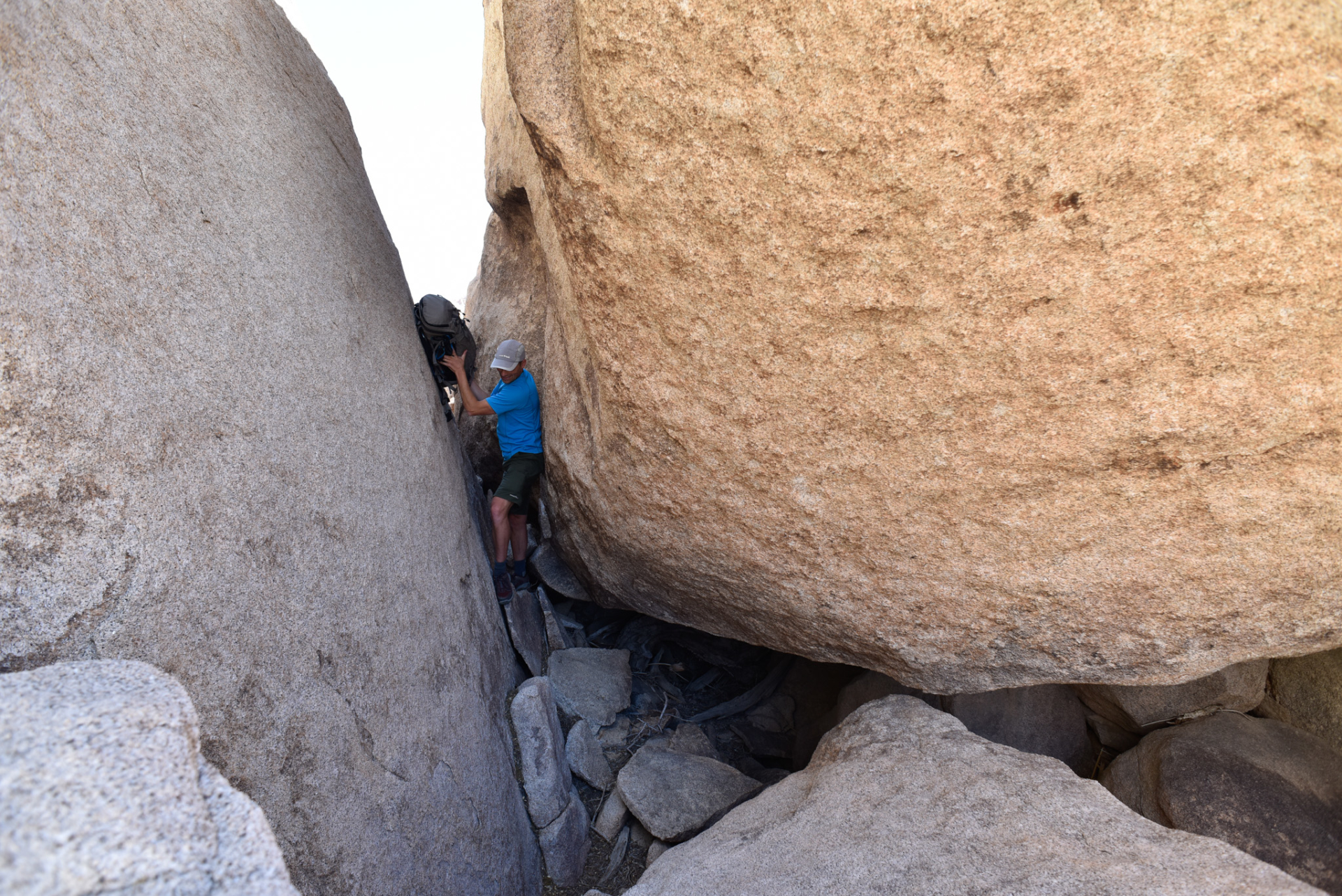