I am old enough to have experienced the profound benefit of long friendships.

The arc of a lifetime, when shared with folks who are special to you, is in some way measured and calibrated by these interactions. Things change. We change. But the joys of sharing the adventures that stir one’s soul with equally passionate people does not fade. 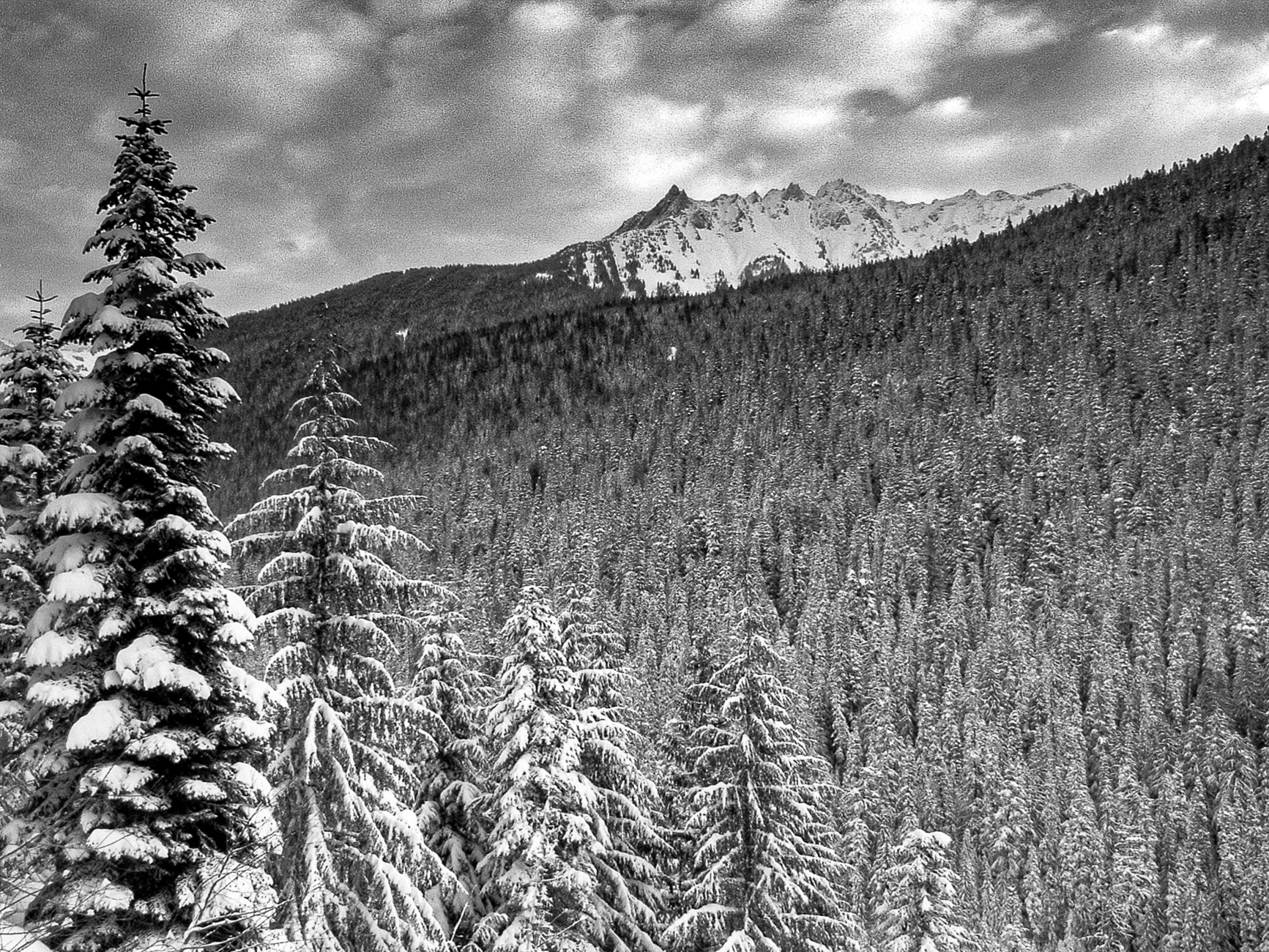 The Valley of White Salmon Creek.

A cadre of these old friends have made it a habit to join me on a winter outing each year, having long ago discovered a mutual appreciation for winter backpacking and snow camping, either on cross-country skis or snowshoes (the choice determined by both conditions and ambitions). An annual excursion along these lines had become a custom, an obligatory rite of winter, a sacred duty.

These fellows are all of an adventurous bent, easy-going and possessed of the requisite idiosyncrasies to keep things interesting and conversation scintillating.

And so it was that after many years of these winter forays, we found ourselves facing a familiar quandary: We had finagled a weekend where our party of five could all get away and now we had to choose a destination. As usual, this involved an in-depth strategic planning session at Boundary Bay Brewery. On this occasion, the session lasted even longer than usual.

We thought about Rainier (too far to drive), the Wells Creek Road (not enough elevation to insure good snow) and a variety of other potential destinations, both familiar and unknown. Finally, we settled on White Salmon Creek, accessed by snowshoeing the White Salmon Road off of the Mt. Baker Highway. At the time, none of us had been out that way before, and the prospect of enjoying the winter alpenglow on Mt. Shuksan was tantalizing. After copious pondering and much poring over topo maps, a plan began to take shape… 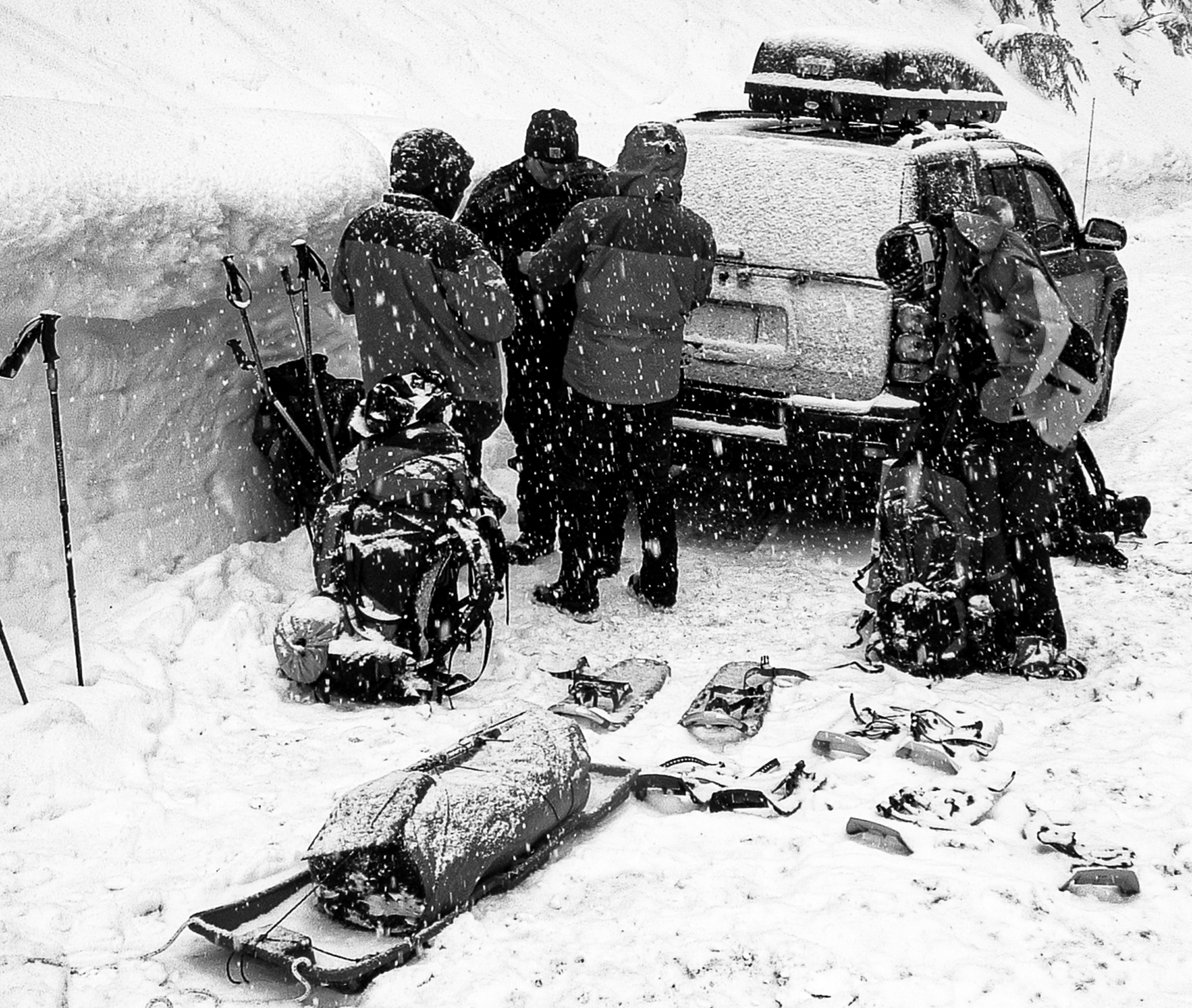 When Friday night rolled around we found ourselves heading up the Mt. Baker Highway, filled with anticipation for a weekend of adventure. We camped beside the Nooksack River at a favorite overnight stop on the way to the mountain. As usual at this time of year, we were the only ones there. Somewhat less predictably, the sky was clear and a mantle of stars provided a canopy for our campfire. In the morning we’d hike into the valley of the White Salmon. For tonight, it was time to kick back beside the fire, telling stories and laughing the unfettered laughter of good friends enjoying an evening together in the woods. The night grew cold, but we were warm and comfortable by the fire. Somewhere in the darkness, an owl serenaded us as moonlight painted the river with an ethereal golden luster. Life was good. 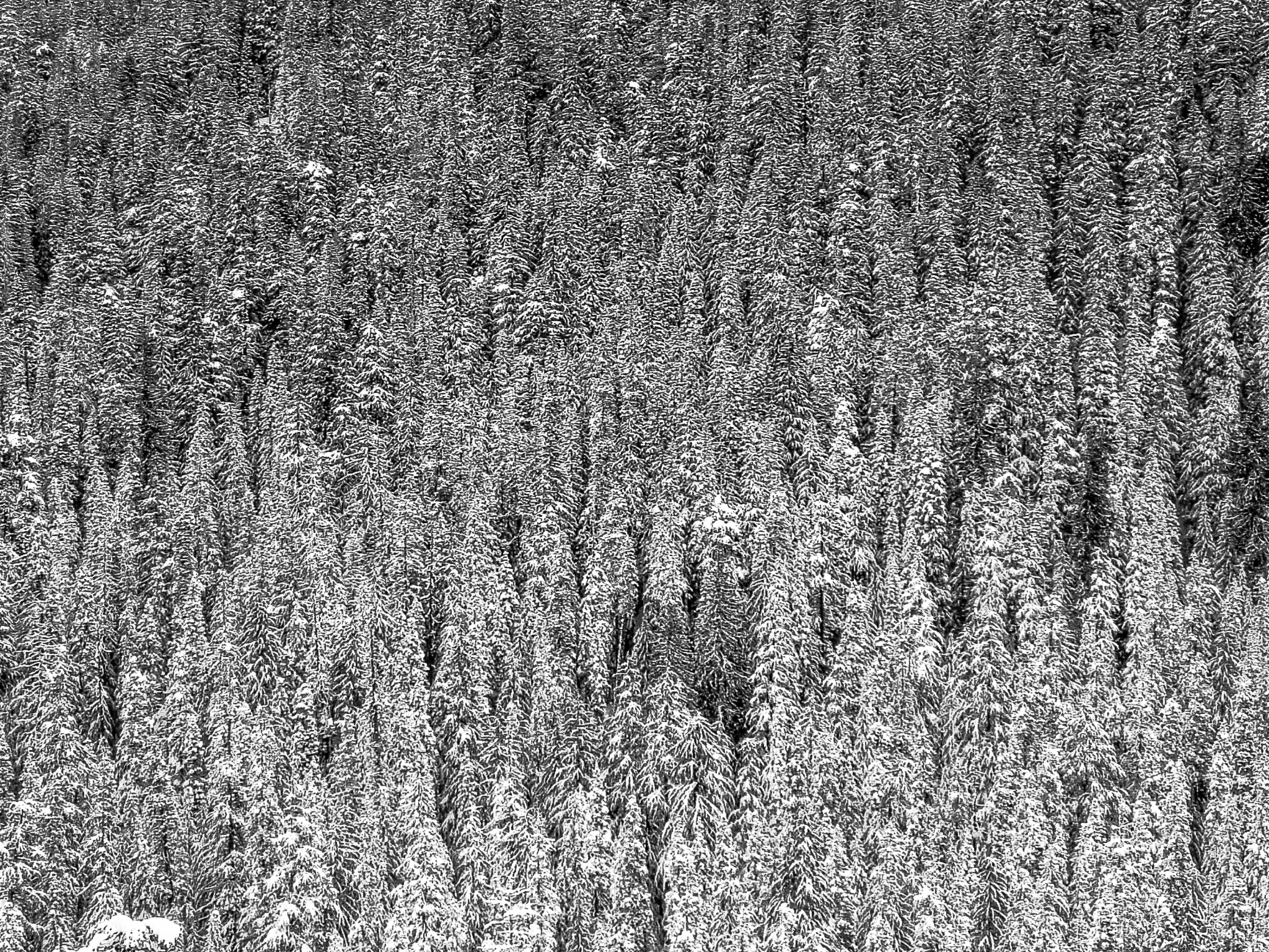 The morning was clear and emphatically cold. There were tracks in the snow beside the river: John speculated that they might belong to elk. We made coffee and breakfast beneath giant cedars and gathering clouds, broke camp and headed up the road towards the mountain. It began to snow, lightly at first. As we ascended the Mt. Baker Highway, the snow began to fall harder, reducing visibility to a hundred feet. We pulled off at the White Salmon snow park and loaded our packs and the infamous sledge—a converted plastic sled that Gary had commandeered from his kids. The sledge was sort of a tradition with us, utilized over numerous winter outings and over the years we’d refined our sledge technique considerably. Stowing essential items in a dry bag, we lashed it on using an elegant rope system of Gary’s devising. We carried our own “campfire” on the sledge, a fire pan and Duraflame logs, insuring zero impact when we camped.

We shouldered our packs and strapped on our snowshoes. Gary slipped into the sledge harness and we set off up the White Salmon road into the falling snow.

We followed the road up and over a rise and then began the long descent into the valley of White Salmon creek. At an obscure junction we turned right (why not?), paralleling the creek, unseen but presumably somewhere below. The snow was really flying now and our views were limited to the other members of the party, moving in a line through the swirling white.

The route became rougher as we fought our way through thickets of slide alder across a slope. The sledge kept getting hung up in the trees. Joe, venerable beyond his years, hauled it through the worst of it and the route petered out altogether on a little bench amongst the trees. We decided to make camp here on a more-or-less level patch of snow, pitched the tents and excavated a living room/kitchen in the drifts. 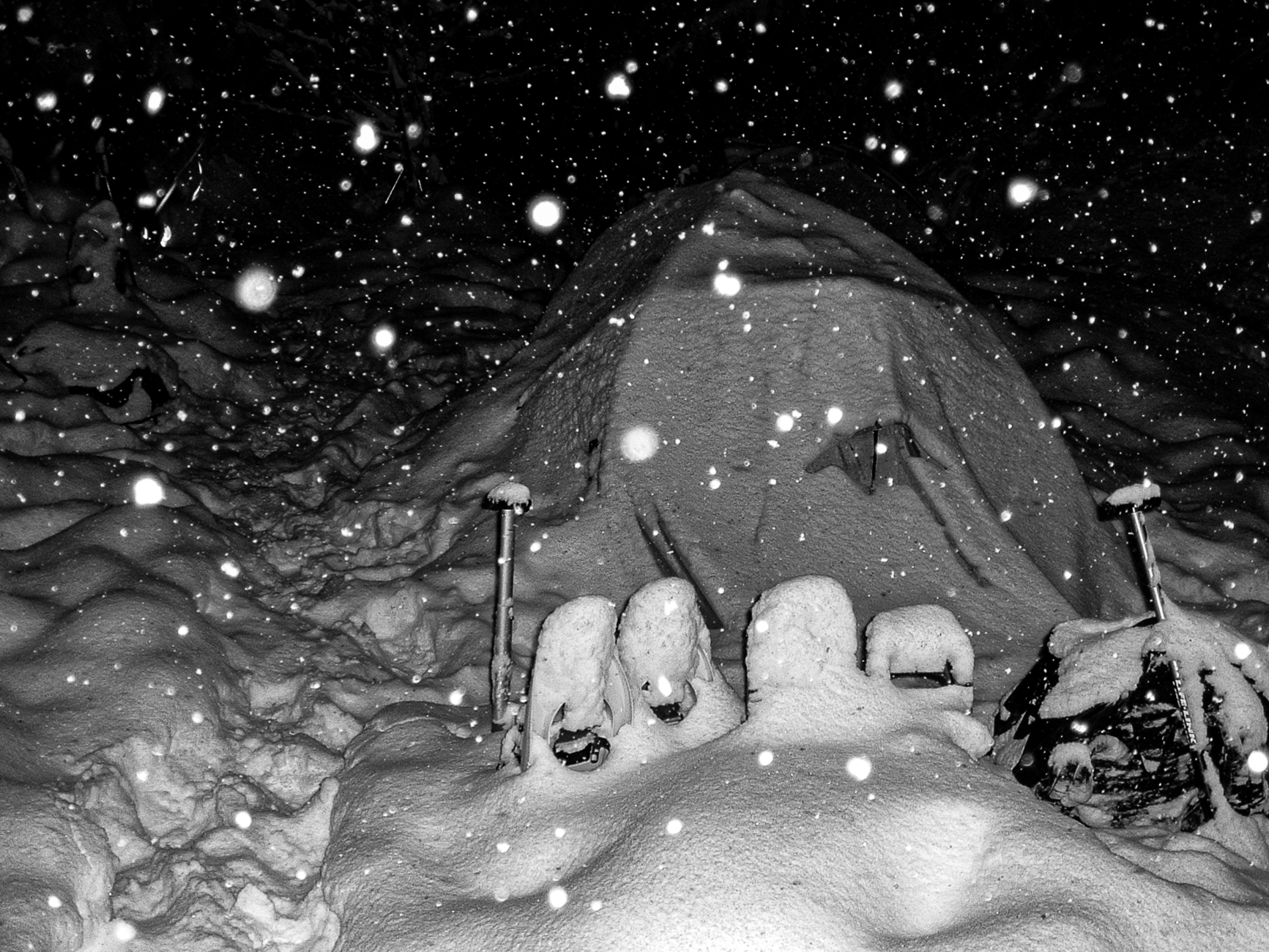 Dusk (and more snow) fell and we ate our dinner beside a crackling fire beneath a tarp, strung from spindly alders, taking turns shoveling off the tents which were quickly becoming buried. Dick produced a bottle of fine port from the sledge and we toasted our good fortune. Then one by one, it was off to the business of dreams in the deep hush of a winter night, disturbed only by the need to get up in the wee hours to shovel the snow from the tent. 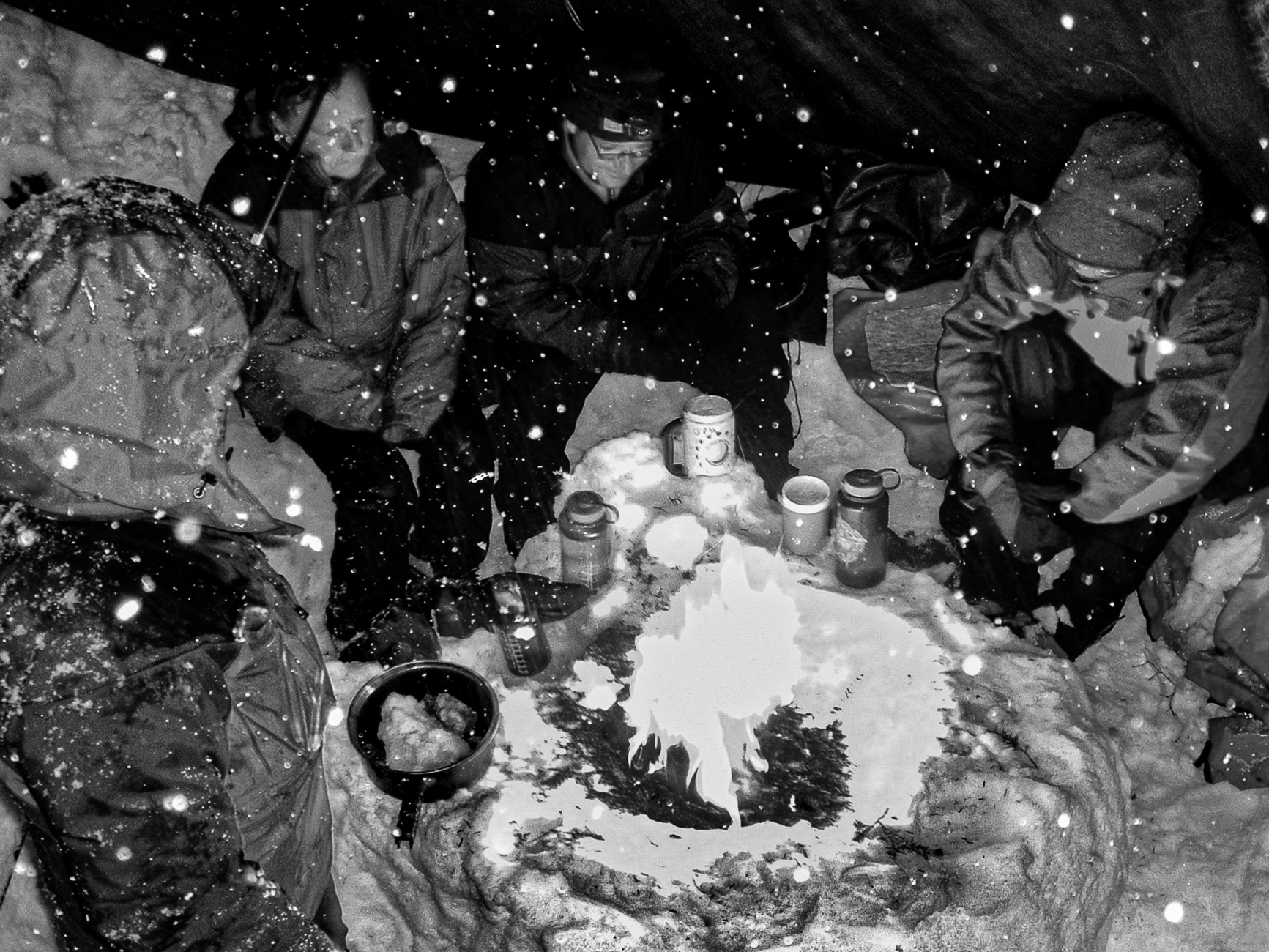 Morning came early, bright and clear. We dug ourselves out of our tents and emerged into a sparkling world of white beneath a royal blue sky. At least a foot of new snow had fallen and there was not a breath of wind. 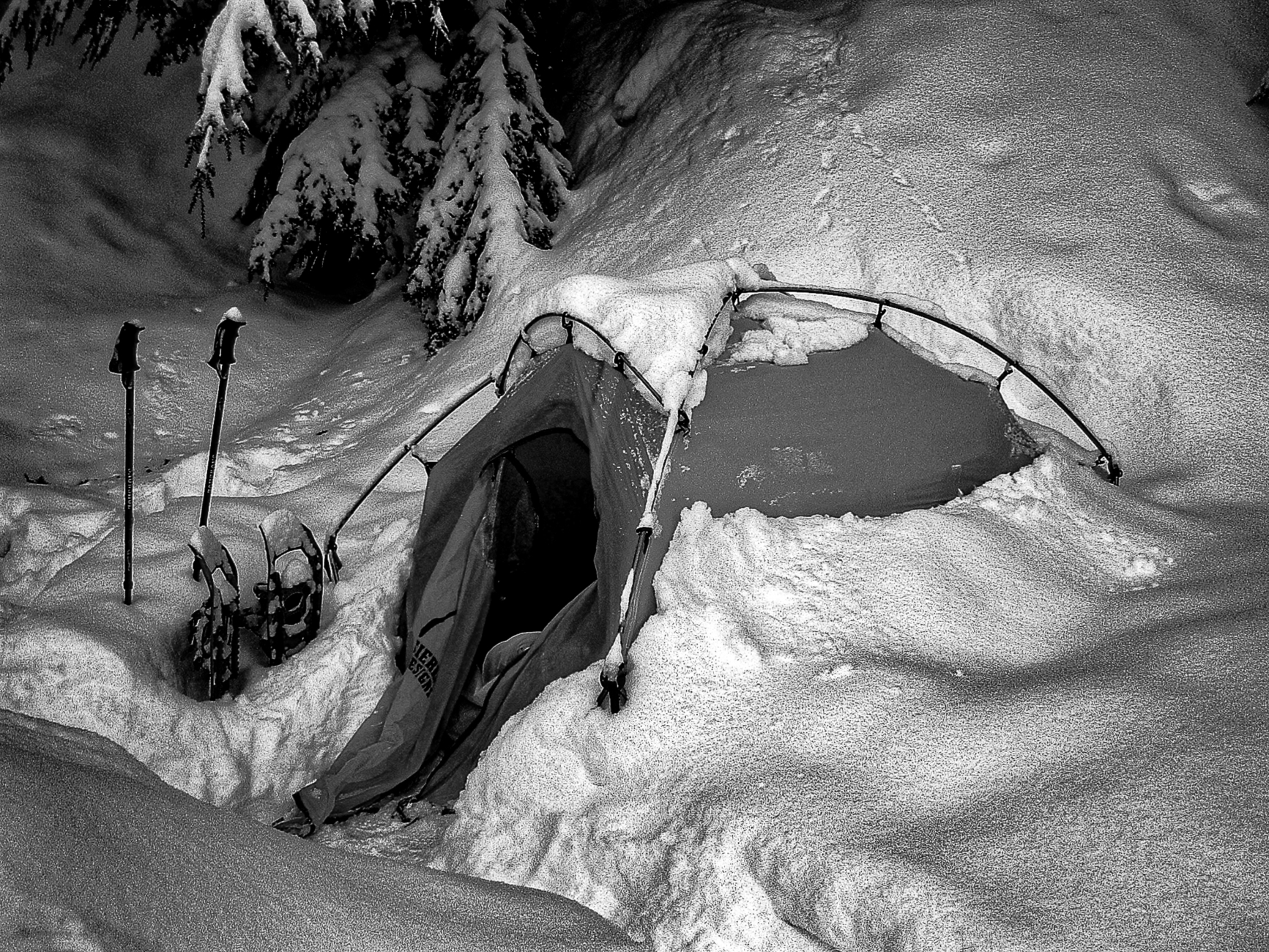 Gary got the morning fire going (bless him) and we put on the water for coffee. We relaxed beside the fire and enjoyed a leisurely breakfast of buckwheat pancakes. It was a Jack London moment.

Shuksan was framed between snow-mantled hemlock; a breathtaking sight in the crystalline morning light. The quiet was periodically broken by the roar of avalanches and the croaking of ravens. Gary checked his two thermometers—one said 40 and the other said 15. As usual, the truth lay somewhere in the middle.

We got to work digging out the tents and our packs, buried in the snow. The tents would be far heavier on the hike out, thanks to the clinging ice and snow but thankfully we had the trusty sledge. We hoisted our packs and started back through the tangle of alder in the deep powder, a joyous and vigorous enterprise. The mountains were magnificent—a Robert Frost poem come to life—cloaked in fresh snow, gleaming in the cold sun, the summit of Shuksan adorned with a plume of spindrift.

We spread out as we made our way through the woods, each of us alone with our thoughts, moving in silence except for the crunching of our snowshoes and the occasional whump of snow falling from a branch.

All too soon, we reached the trailhead, dug out the vehicles (a lot of digging on this trip!) and loaded our gear for the journey home to Bellingham, happy, weary and energized, all at the same time. We pulled onto the Mt. Baker Highway into the après ski traffic and headed west into the late afternoon sun toward home. 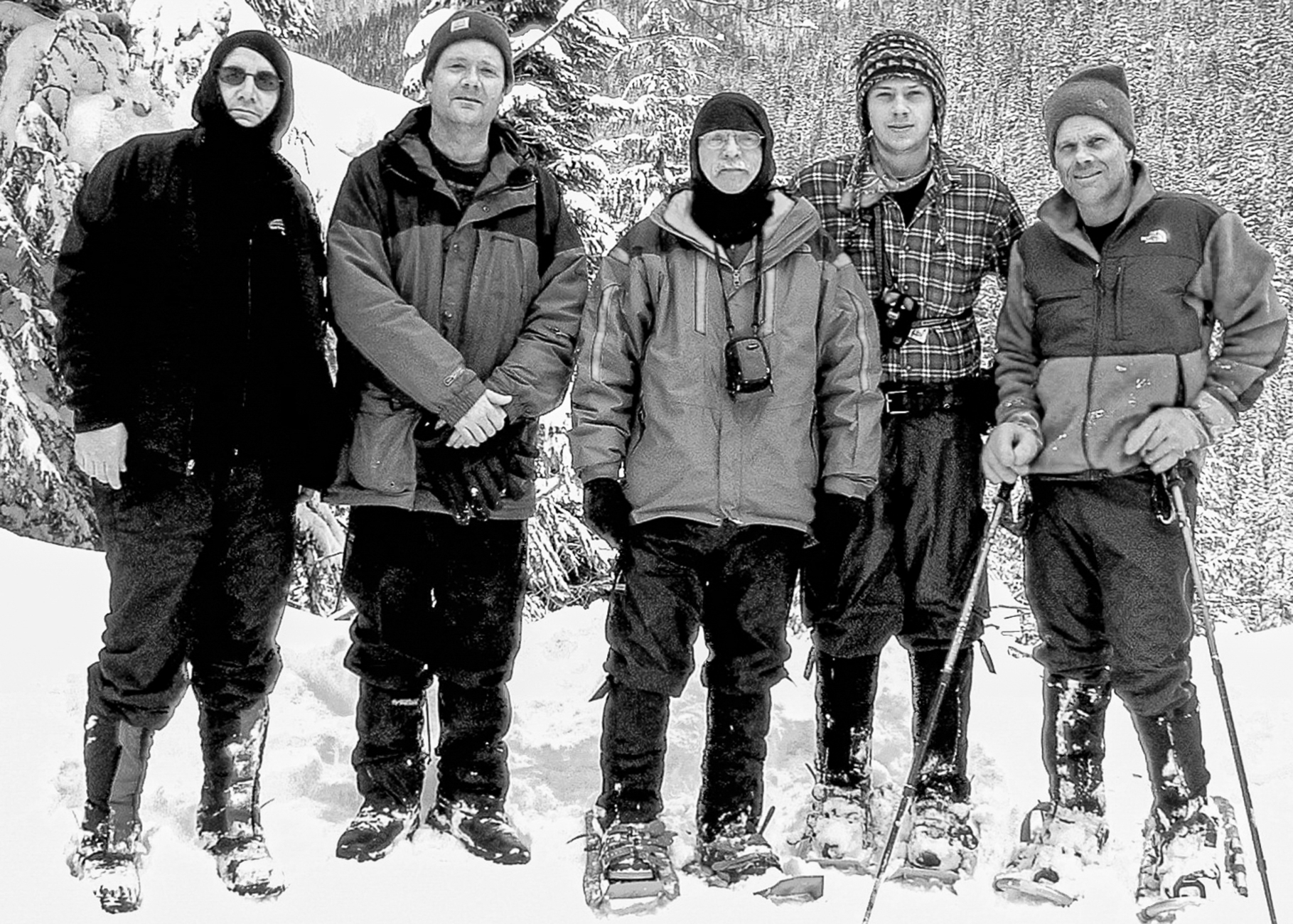