Yolanda La Amarosa flies through the air in a swirl of gold lamé and petticoats, her calves clamped around the throat of her unfortunate opponent. He spins across the ring to land in a sprawl on the canvas, hand pressed against his lower back, face set in a grimace of agony. 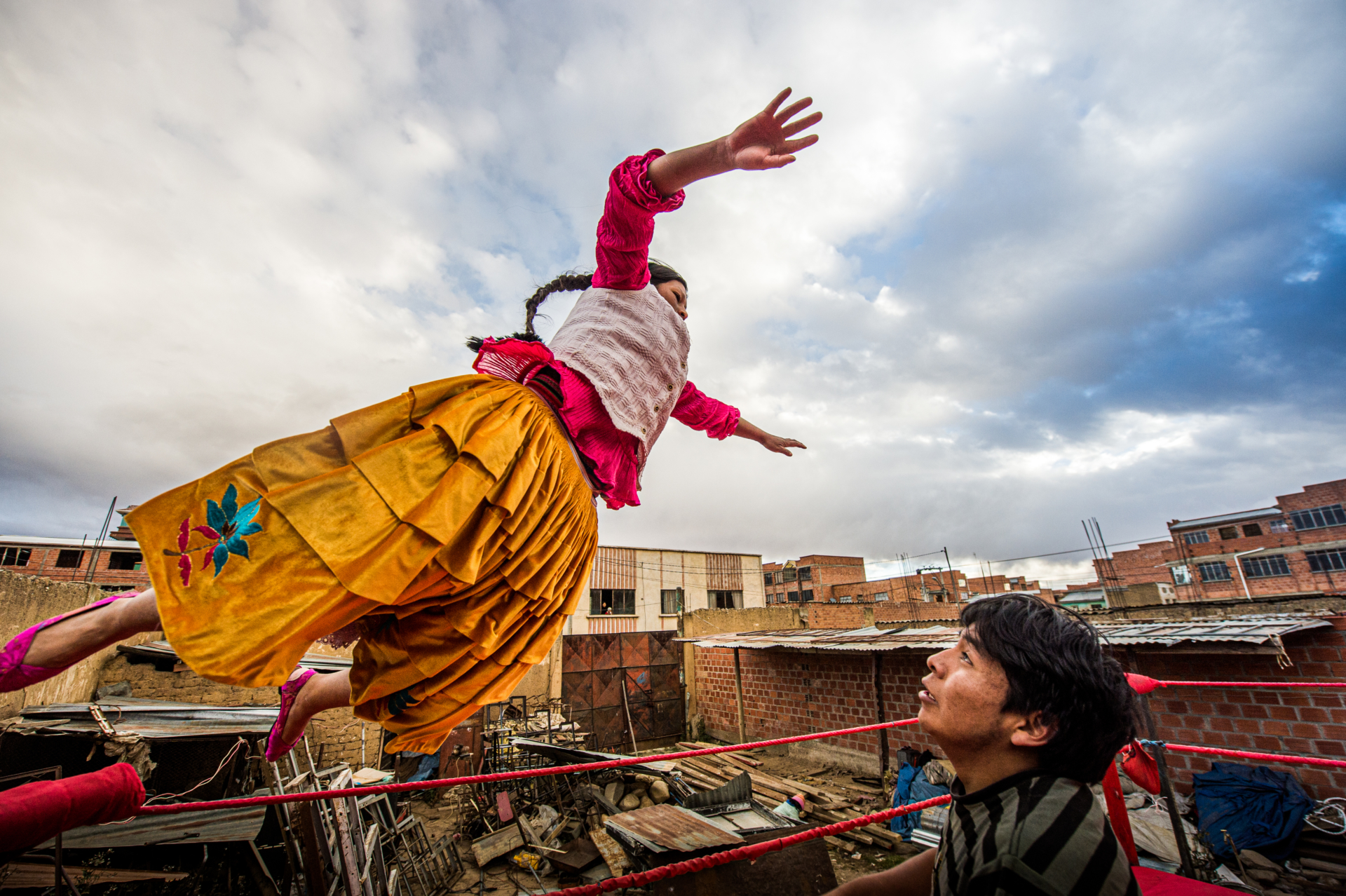 Yolanda la Amorosa takes to the air during a training session in Zona Complejo, El Alto. Her unfortunate opponent will have to break her fall.

"Quieres mas, cabron?", Yolanda cries as she strides over and kicks him in the back of the head. There’s a ripple of applause and laughter from her fellow wrestlers, who are hanging on the ropes, waiting their turn to practice the same sequence. 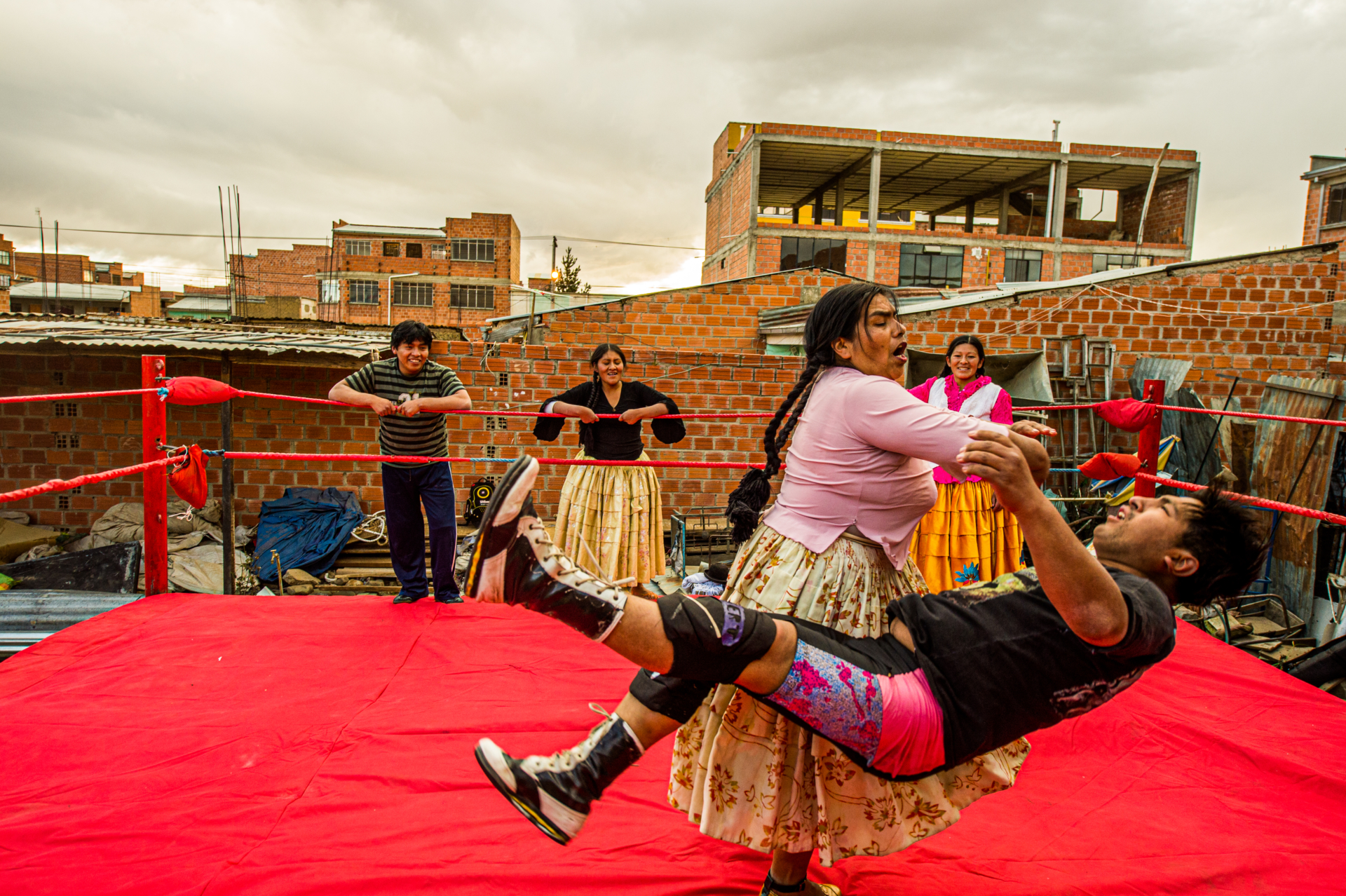 Mercedes La Extremista delivers a brutal clothesline to her male opponent during a training session in Zona Complejo, El Alto. The male wrestlers give little quarter to their female counterparts and it's a tough sport, despite the theatrics.

The ring is set up in a junkyard on the outskirts of El Alto, a sprawling migrant city that was once just a suburb of La Paz, the capital of Bolivia. 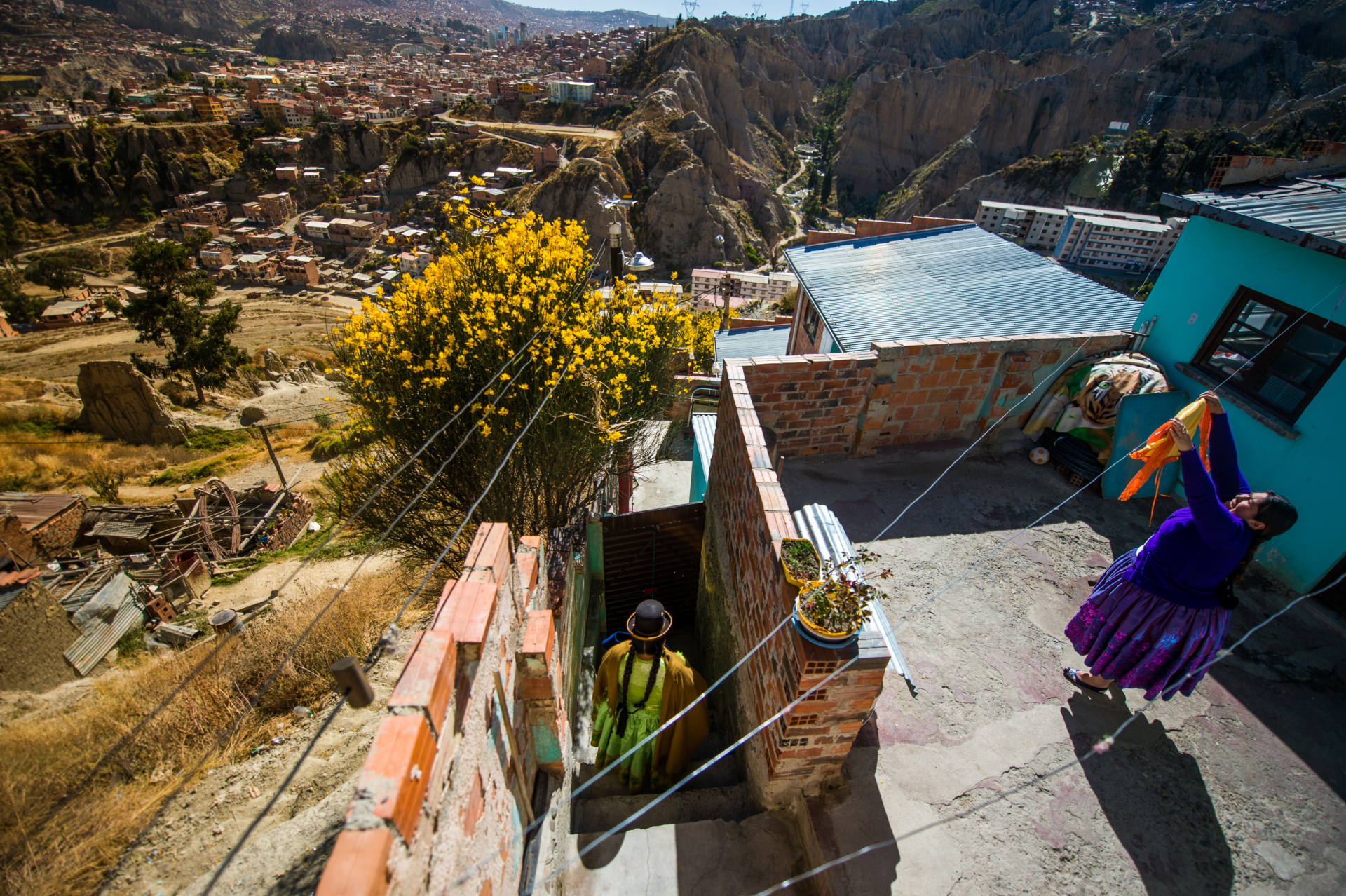 Marta La Altena leaves home late on a Sunday afternoon for her fight that evening. Her sister, Maria la Maldita, an ex Lucha Libre champion, is pregnant and stays at home. She runs a small store close by - though wrestling can bring some fame, it brings in very little money.

The wrestlers are training on torn mattresses atop wooden planks. It’s late afternoon and the sun dips quickly behind the peaks of the altiplano. At well over 4000 metres, the air is thin and freezing. As the session ends, Yolanda puts her bowler hat on at a jaunty angle, sits on a pile of bricks and asks me, que quieres saber…? 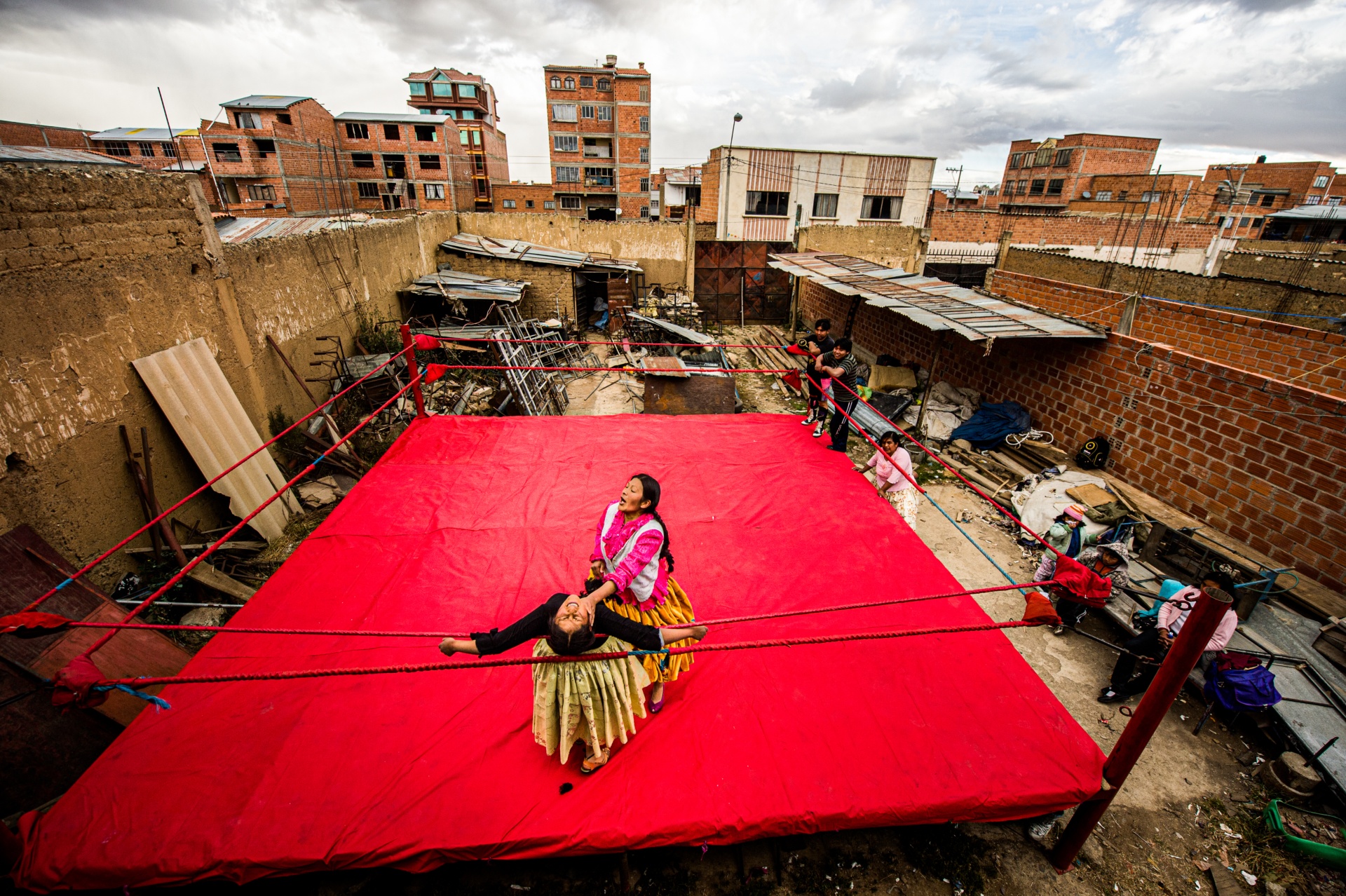 Veteran wrestler Yolanda La Amorosa chokes relative newcomer Mercedes La Extremista against the top rope during a training session at a homemade ring on the outskirts of El Alto. The only padding is some old mattresses atop planks of wood. 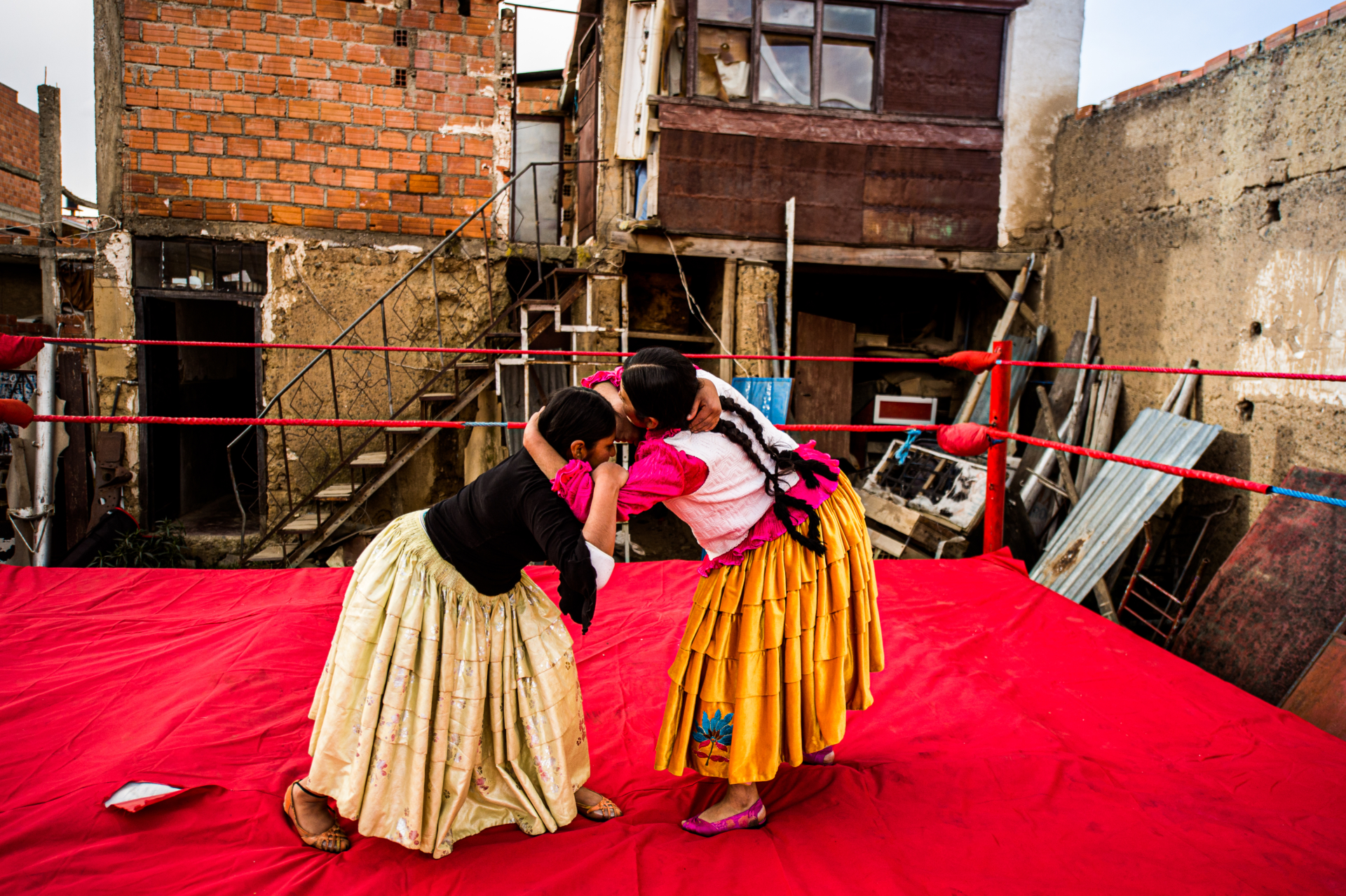 Yolanda La Amorosa tangles with Mercedes La Extremista during a training session in El Alto. Yolanda recently injured her back quite seriously and has just returned to training after a 3 month hiatus. 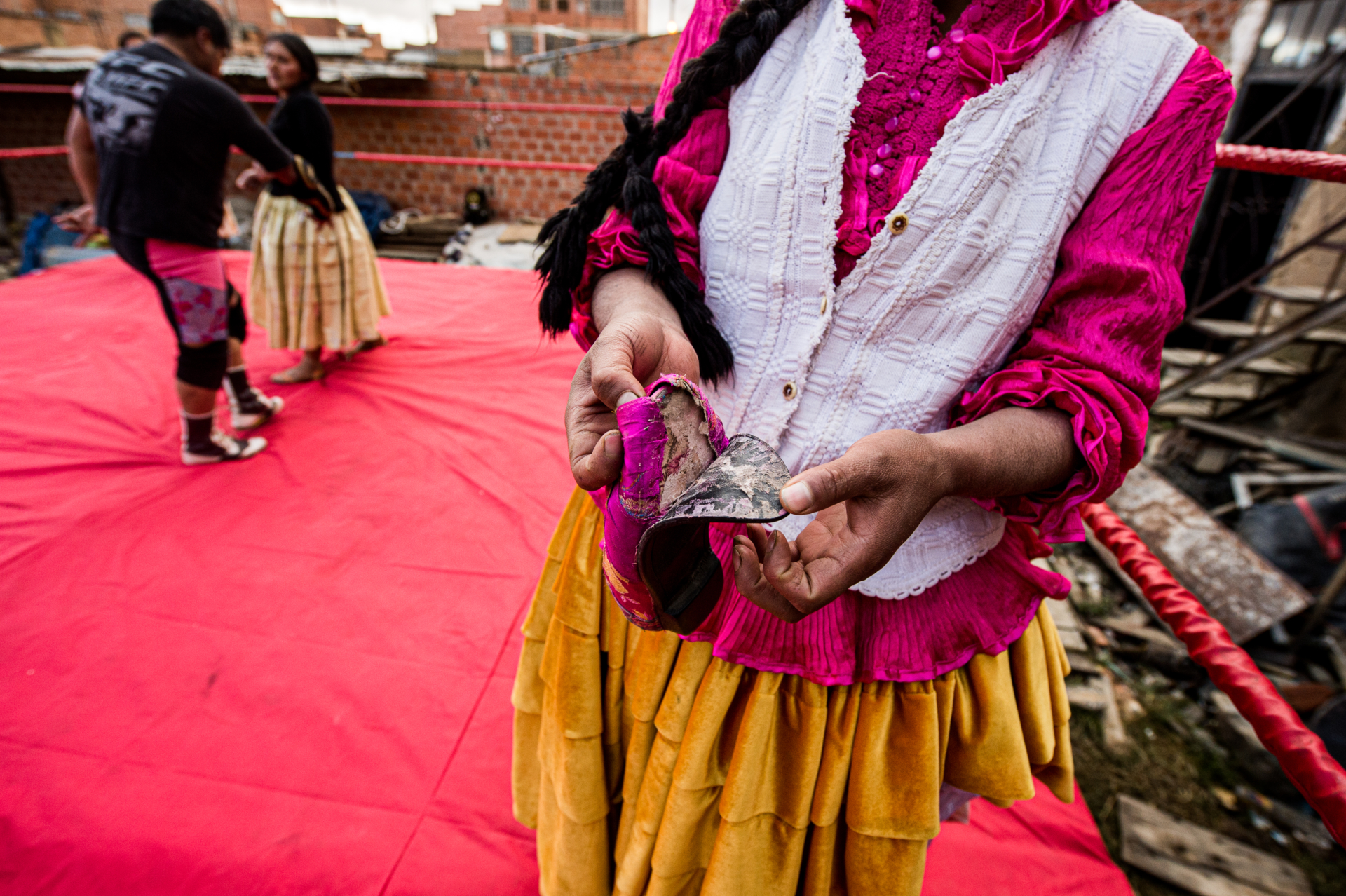 The Cholita Luchadores wrestle in the traditional clothes of the Aymara woman, which date back as far as the 17th century. Yolanda La Amorosa shows how flimsy and slippery the colourful slippers are compared to the professional boots the men wear.

Yolanda Veraluz was one of the first cholita luchadores in Bolivia. Like almost all her fellow female wrestlers, she’s indigenous Aymara – a descendant of the Tiahuanaco culture that predated the Inca. 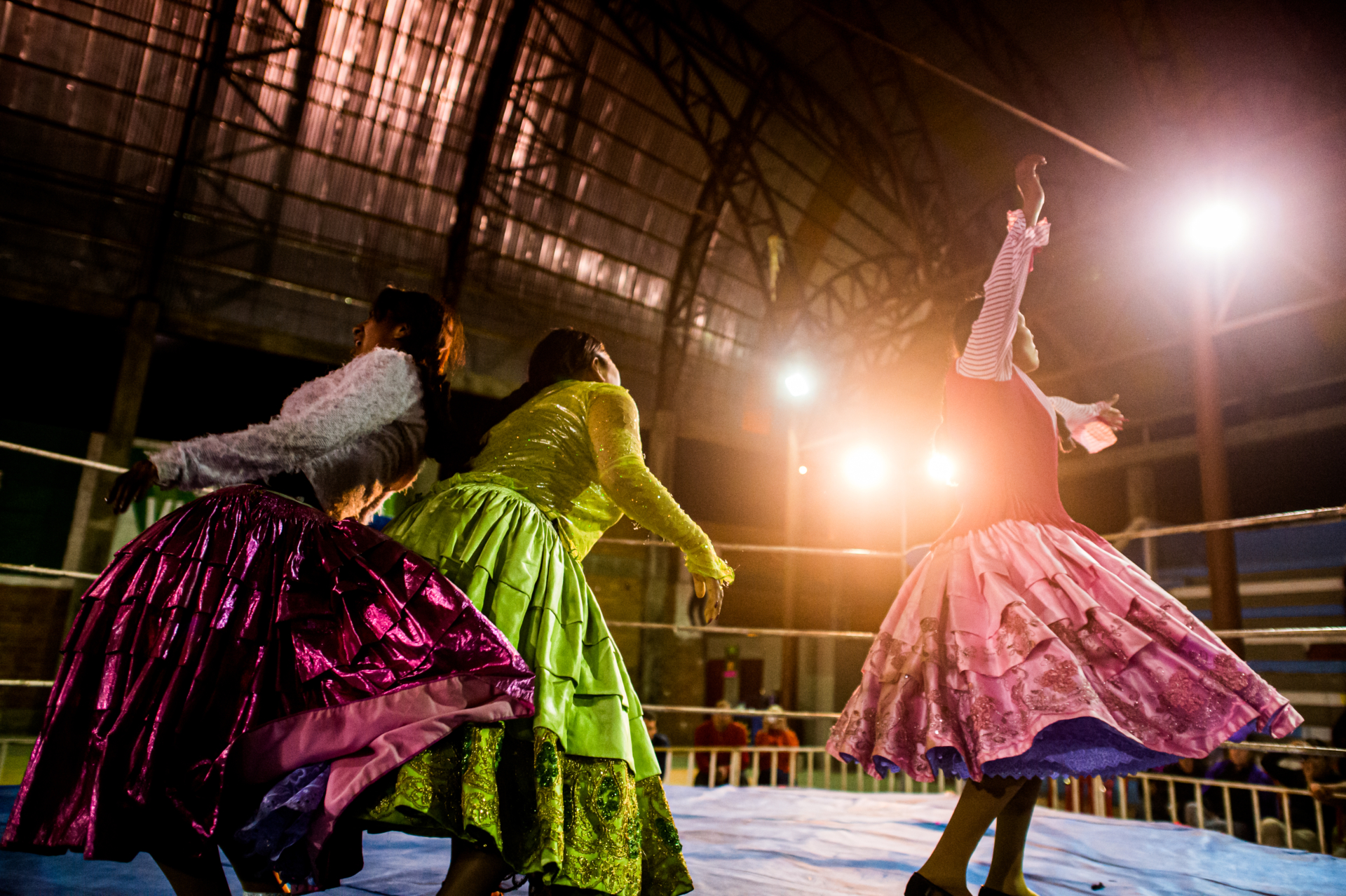 Women started wrestling in Bolivia in the nineties, going head to head with the men. In a country where machismo is almost a reflex, the cholita luchadores have become a symbol of female empowerment – a fact of which Yolanda is all too aware. “We’ve shown that women don’t have to accept discrimination and humiliation… that a woman can speak with the same voice as the man. She has the same rights as her husband – to study, to work, to get ahead.” 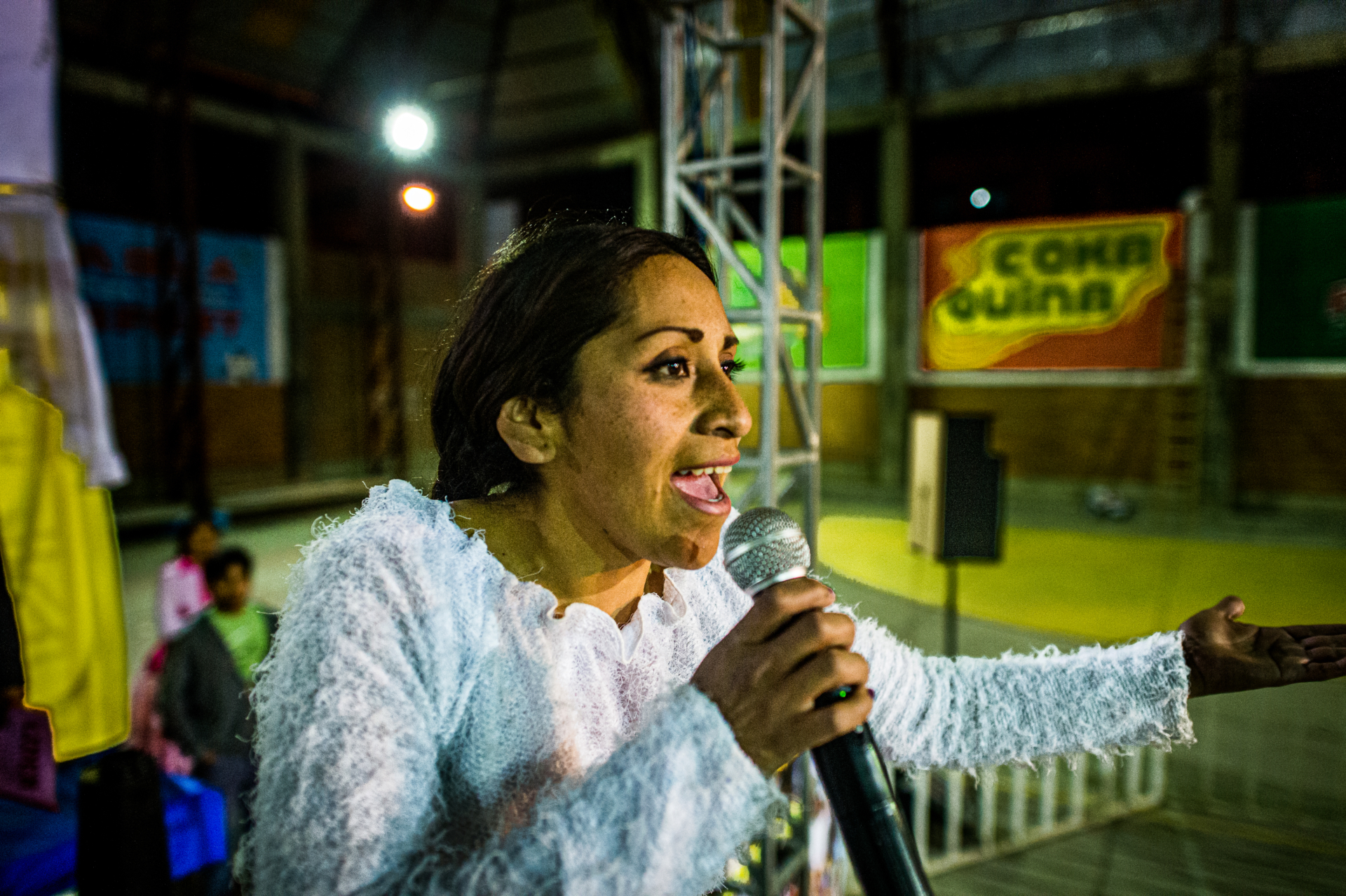 Denita La Intocable addresses her fans after her unfair defeat by the evil Marta La Altena. Wrestlers have loyal supporters, all of which adds to the drama. 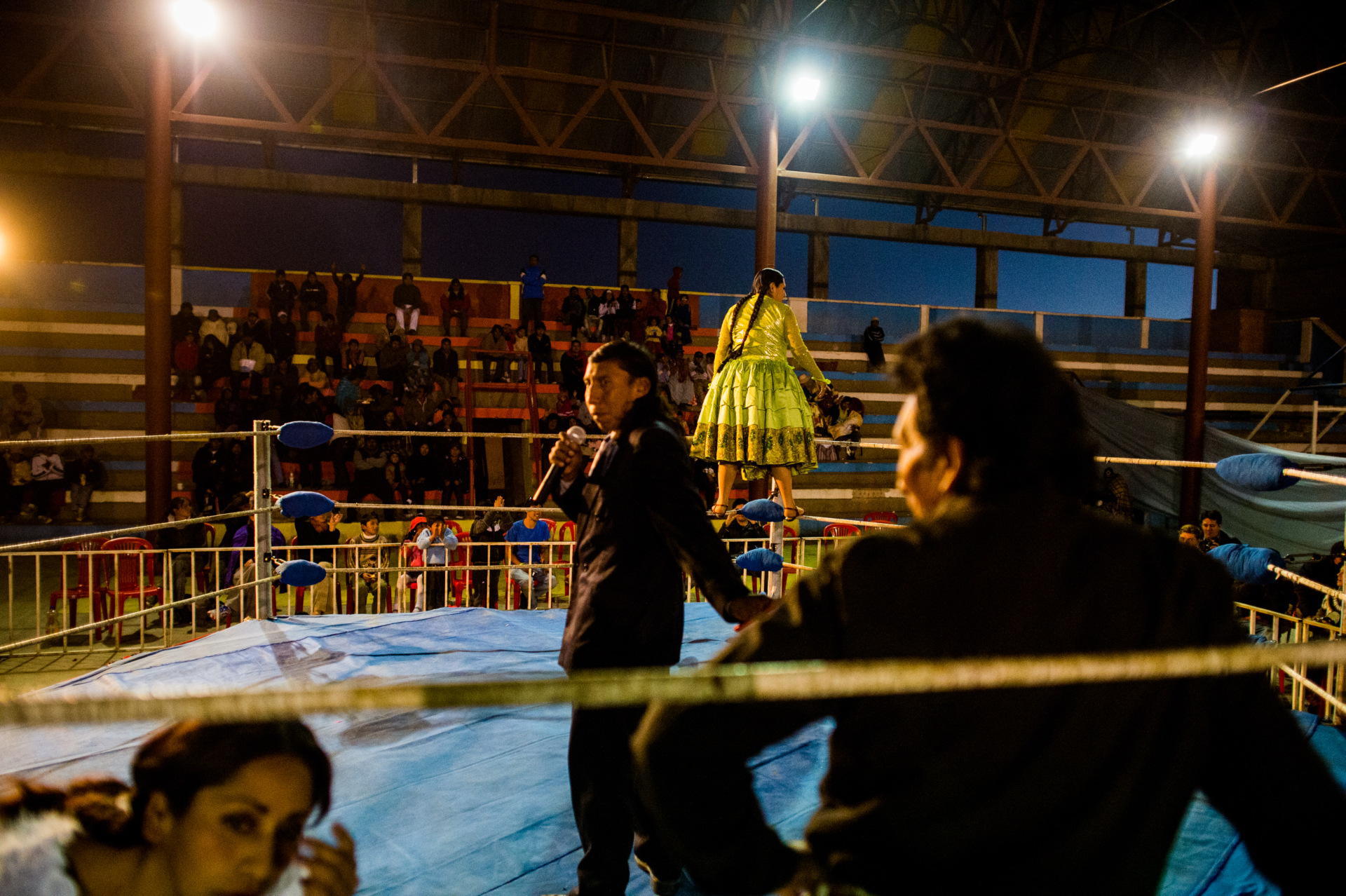 In the last ten years, increasing numbers of indigenous woman have been taking to the rings in the outskirts of La Paz, fighting back against the dominant culture of machismo and discrimination. 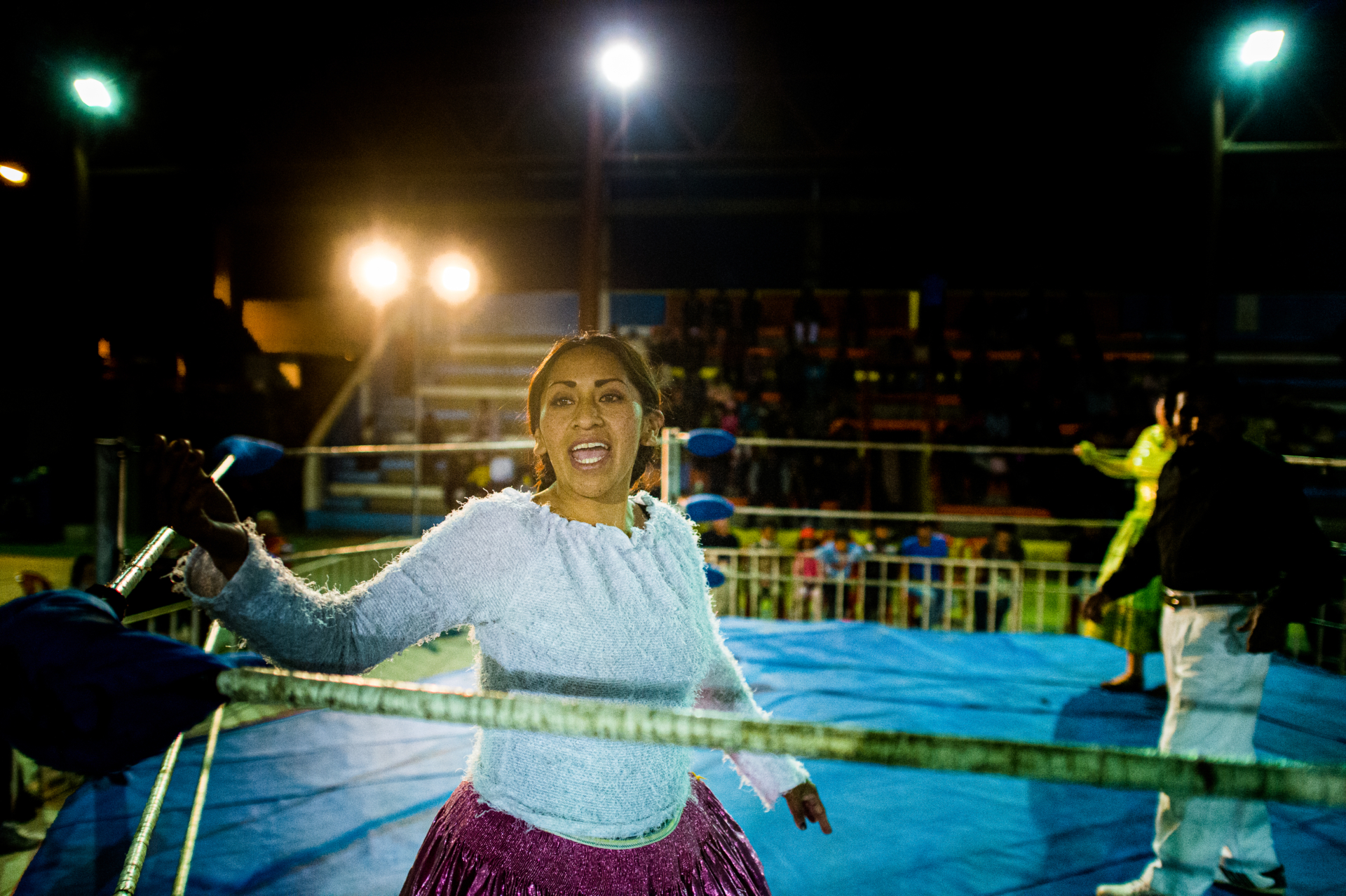 Denita La Intocable exhorts her fans to make some noise during her bout with the evil Marta La Altena. 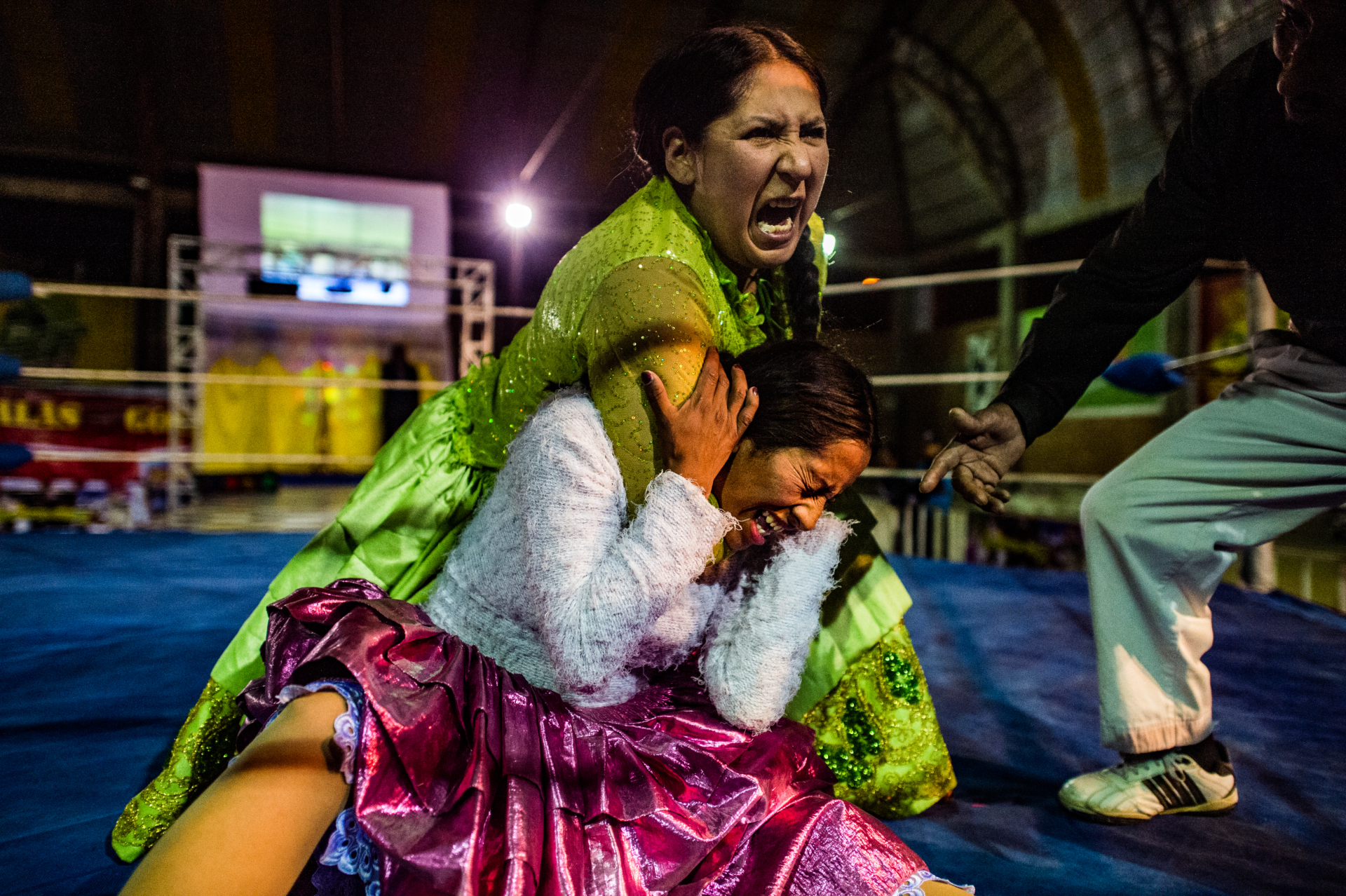 Marta puts Denita into a rear naked choke during their fight at a repurposed warehouse in El Alto. Denita's plight is not helped by the fact that the referee is ludicrously biased towards her opponent.

Once derogatory, the chola moniker has become a source of pride. In October 2011, many of the top cholita wrestlers broke away from the main wrestling organization, Titanes del Ring, which was dominated by one man, Juan Mamani. Disillusioned with Mamani’s autocratic approach, they set up an independent association and are going it alone. “Juan Mamani stole our money,” says Yolanda. “But we realized that we don’t need him. We can do this ourselves.” 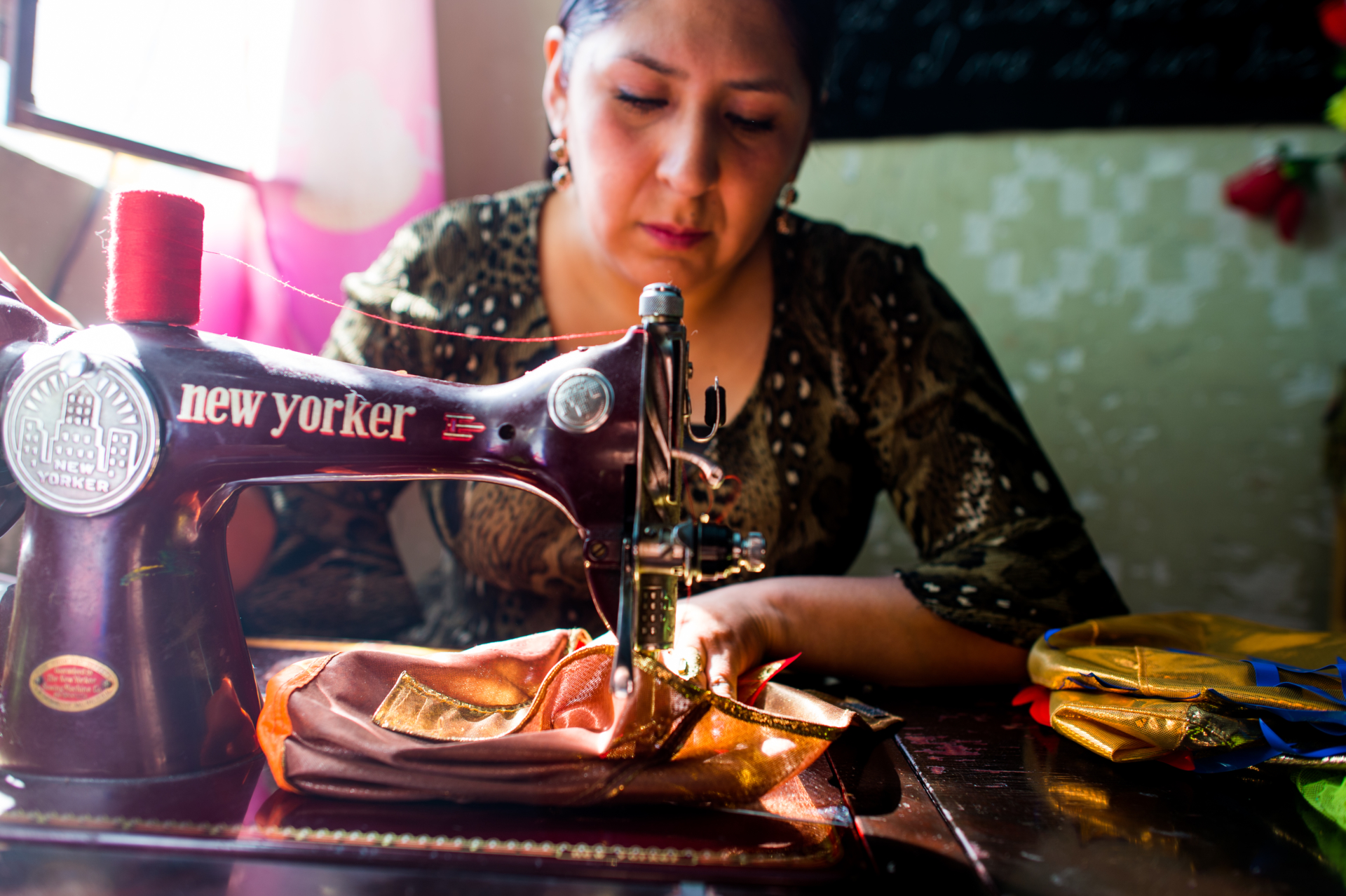 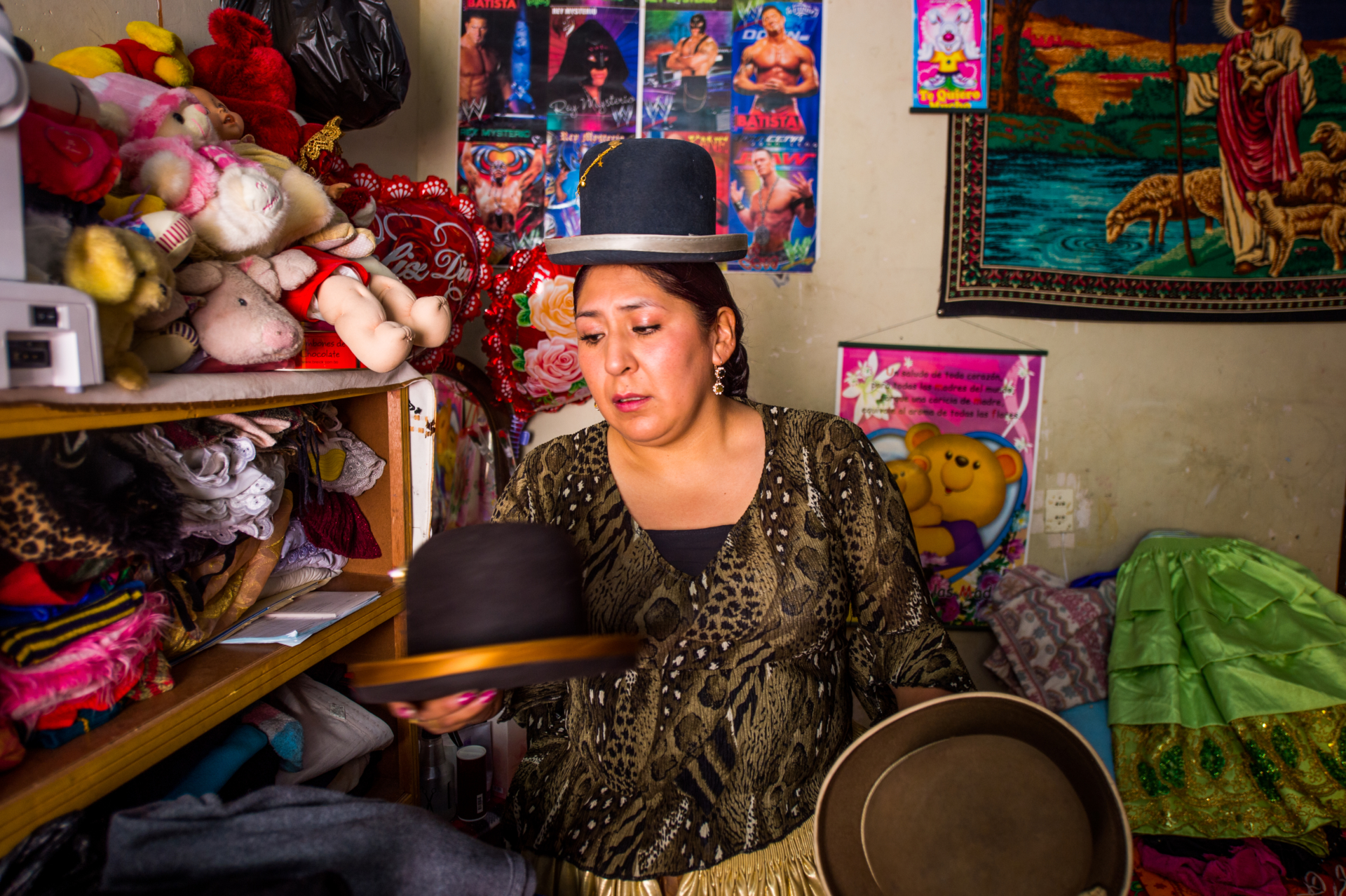 Marta La Altena aka Jenny Mamani Herrera prepares for her Sunday evening bout. First job...which bowler hat is going to be the perfect match for her outfit? These distinctive hats, worn by Aymara women, were originally intented for use by British railroad workers. 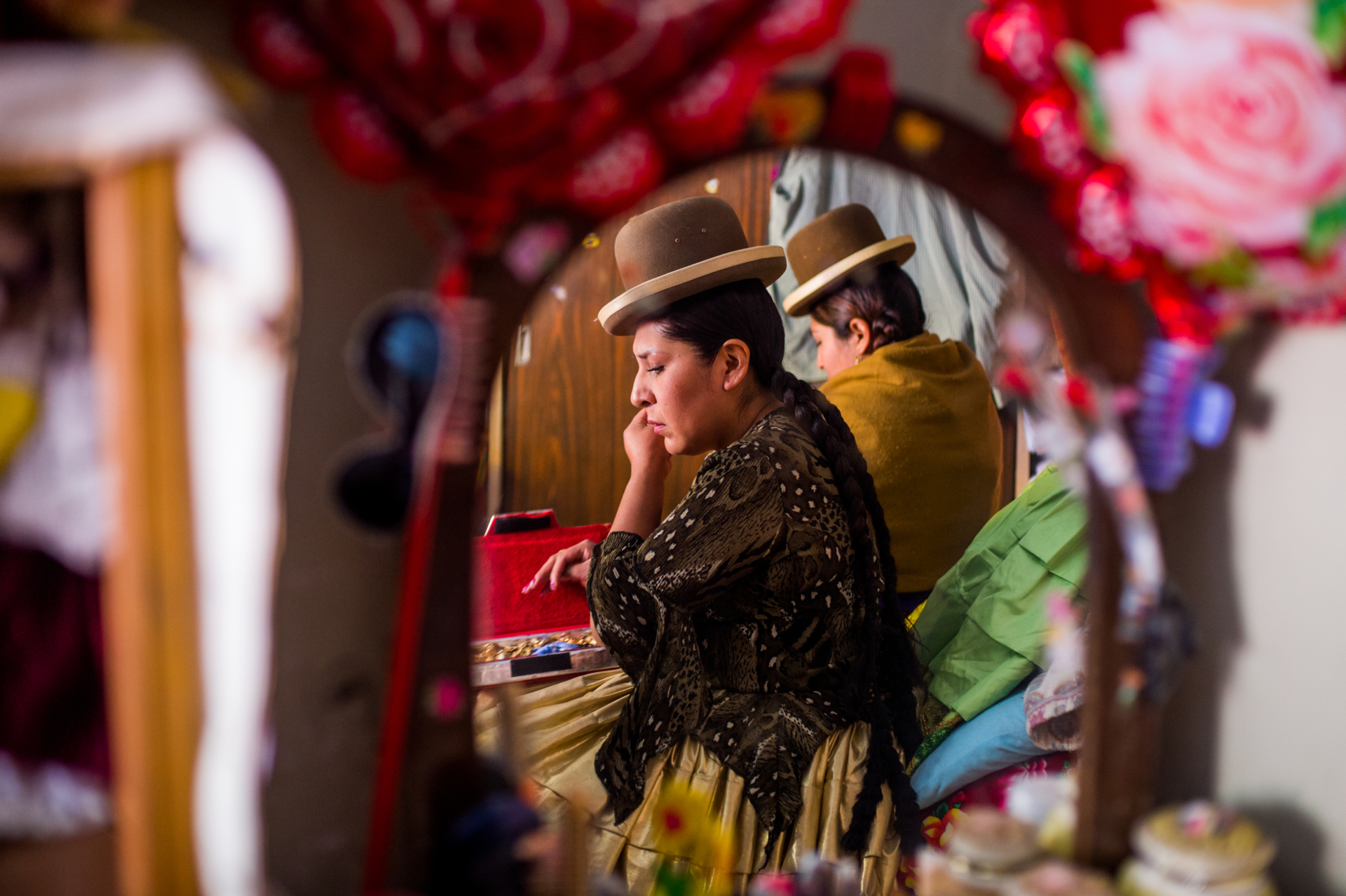 Marta La Altena and her sister, Maria La Maldita - real name Maria Mamani Herrera - put on earrings and make up before Marta's fight in El Alto later that night. Only women from the Aymara ethnic group wear the distinctive bowler hats, introduced in the early 1900's. 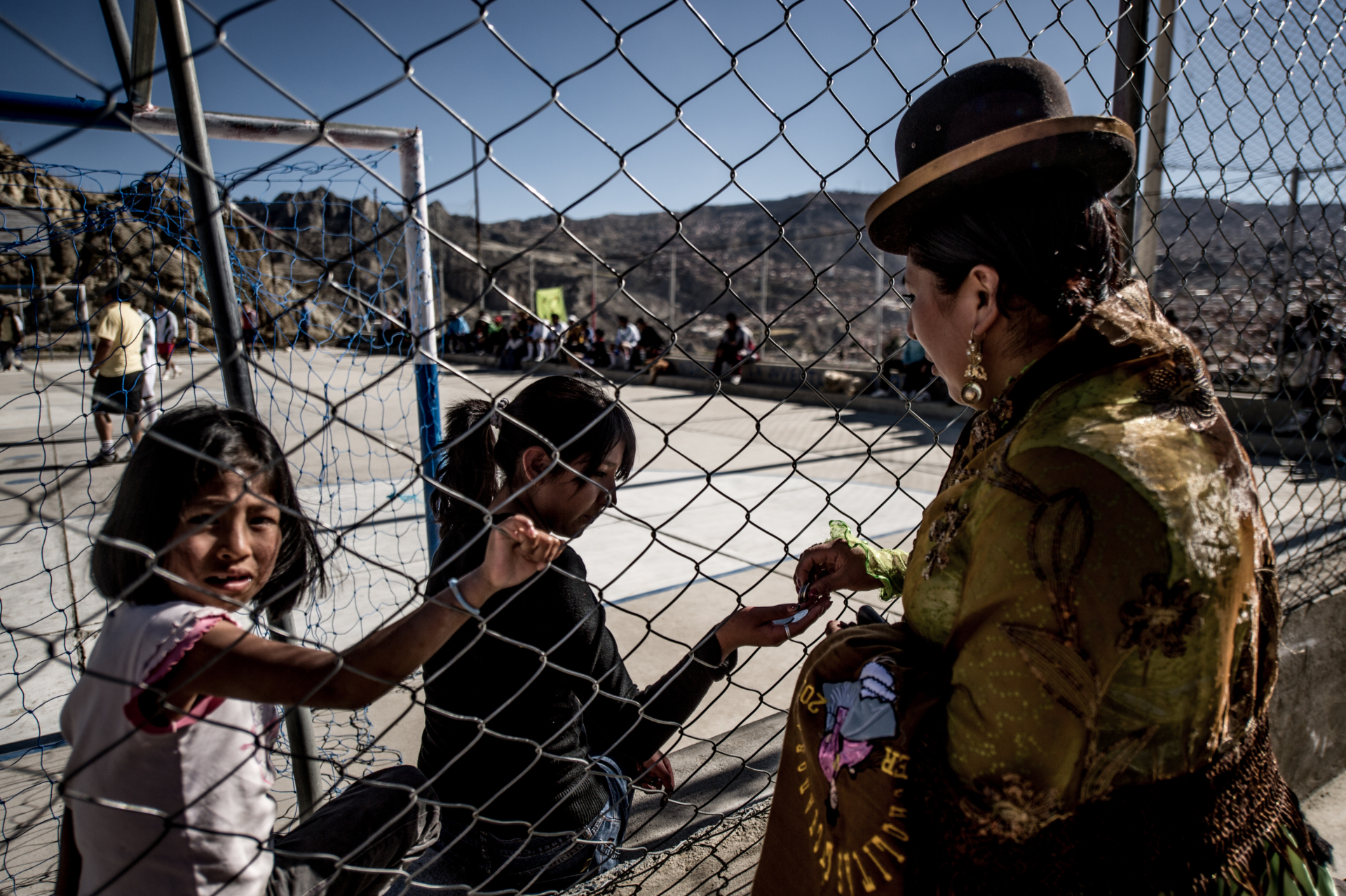 Marta La Altena aka Jenny Mamani Herrera gives her daughter some money to buy groceries with. Her real life personality is a far cry from her evil wrestling persona. 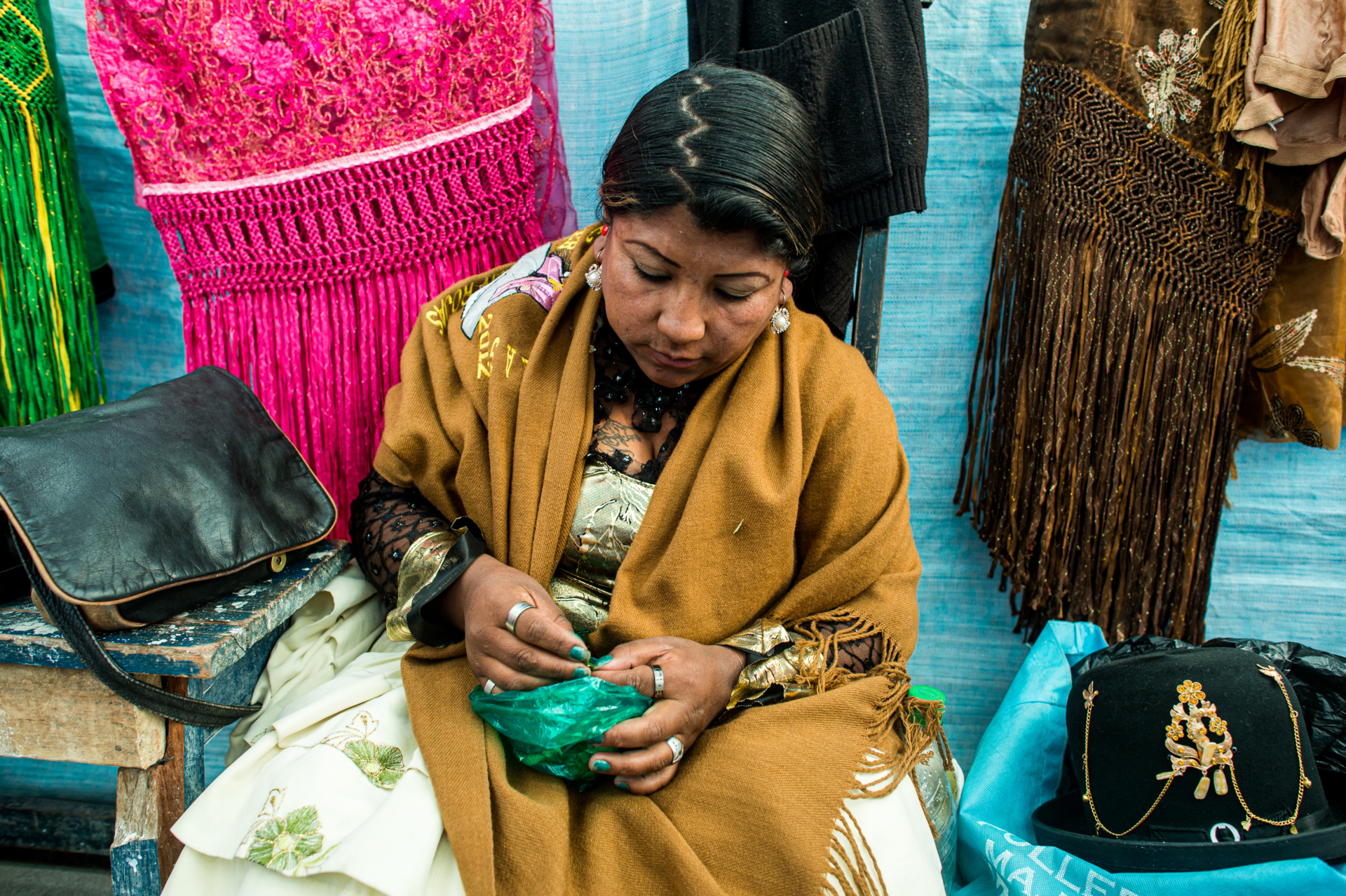 Carmen Rojas takes a pinch of Coca leaf about an hour before she enters the ring. Coca is widely chewed amongst the Aymara and Quechua population. Its practical effects - mental stimulation, appetite suppression and energy are a boon in the ring.

Populist president Evo Morales has been a vocal champion of Bolivia’s predominantly poor indigenous population – in particular its women. In 2010, he put together a cabinet that was evenly split between genders and which included three indigenous women. 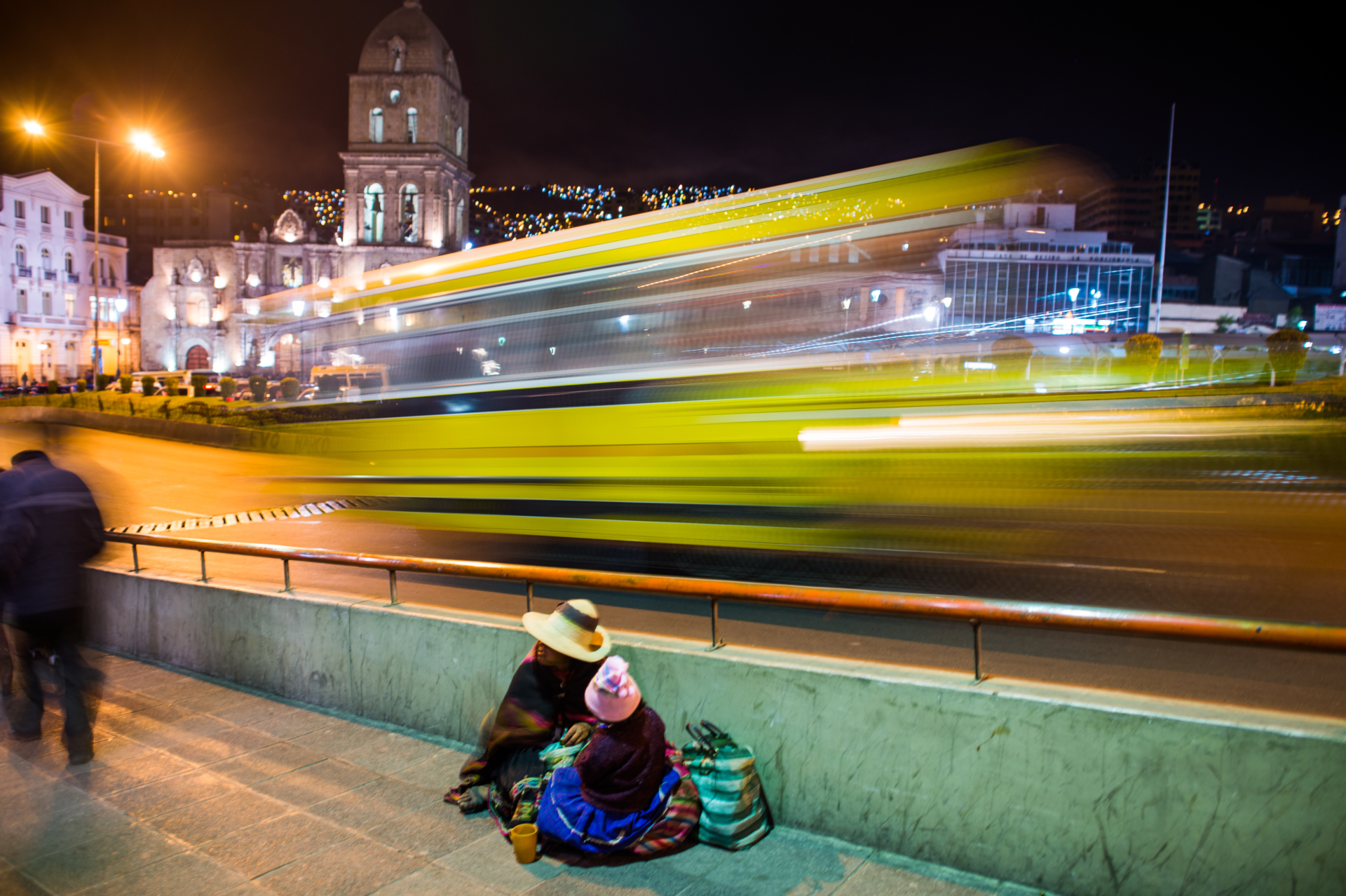 An indigenous woman begs outside Iglesia de San Francisco in La Paz. La Paz has long been a place of both indigenous and gender discrimination, as well as a hotbed of revolution.

There are now signs of an emerging indigenous middle class in the capital La Paz. “Five years ago, we were looked down upon – we used to just wait on the rich,” Yolanda tells me. “But now, thanks to our President, we’re working in banks, in offices and even in government.” 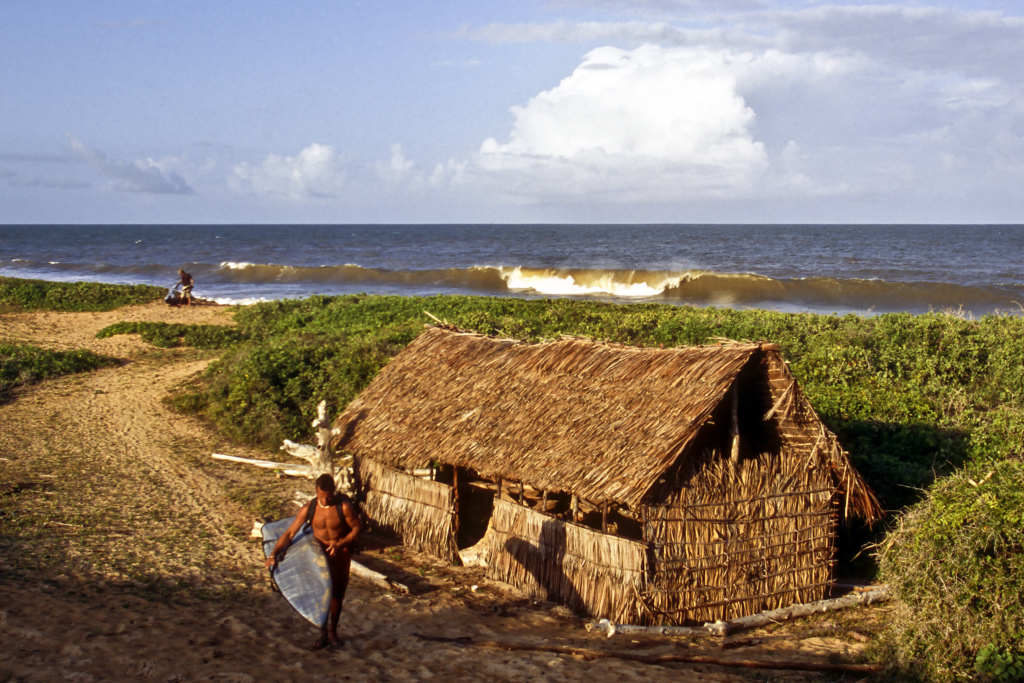 The surfEXPLORE Group takes on big sharks, ambergris and the inconsistent waves ...